Accessibility links
California Wildfires: Storm Clouds On The Horizon Promise Relief — And Rain is in the forecast for California regions decimated by the Camp and Woolsey fires. That's a boon for firefighters, but it also complicates matters for evacuees and raises the threat of mudslides. 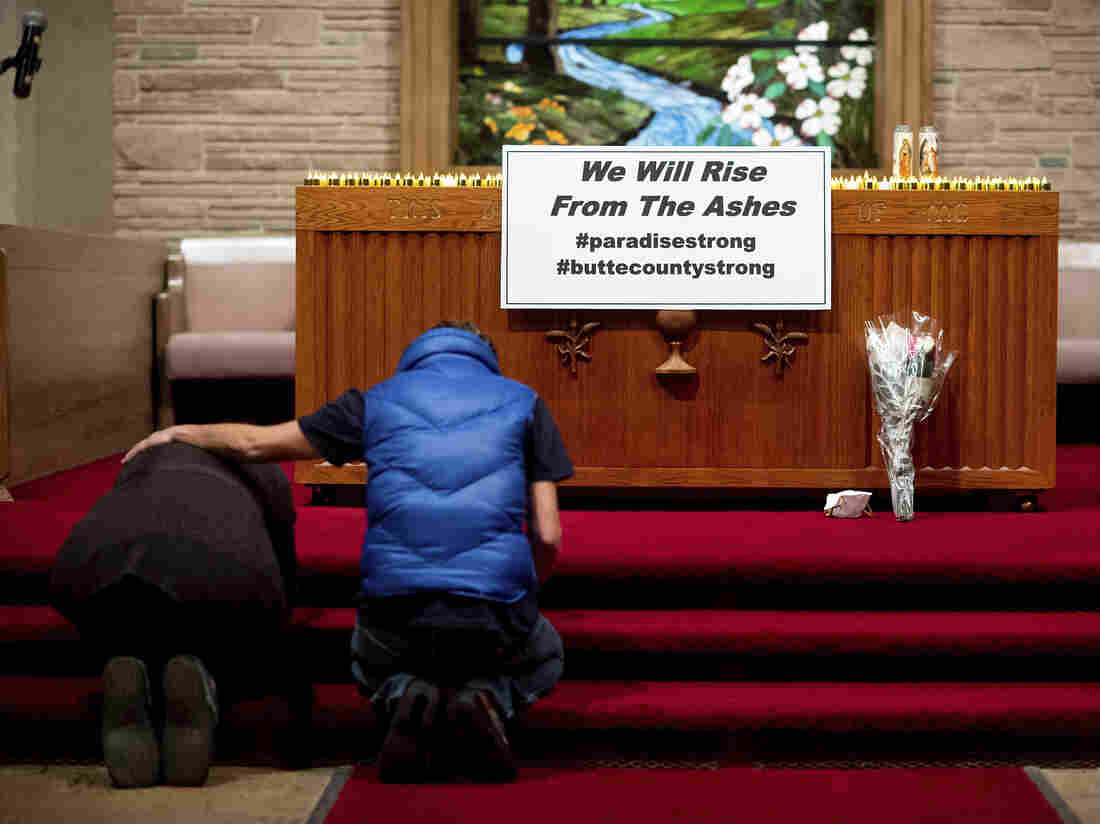 Mourners pray for the victims of the Camp Fire during a vigil Sunday in Chico, Calif. The wildfire killed dozens of people and effectively wiped the entire town of Paradise off the map. Noah Berger/AP hide caption 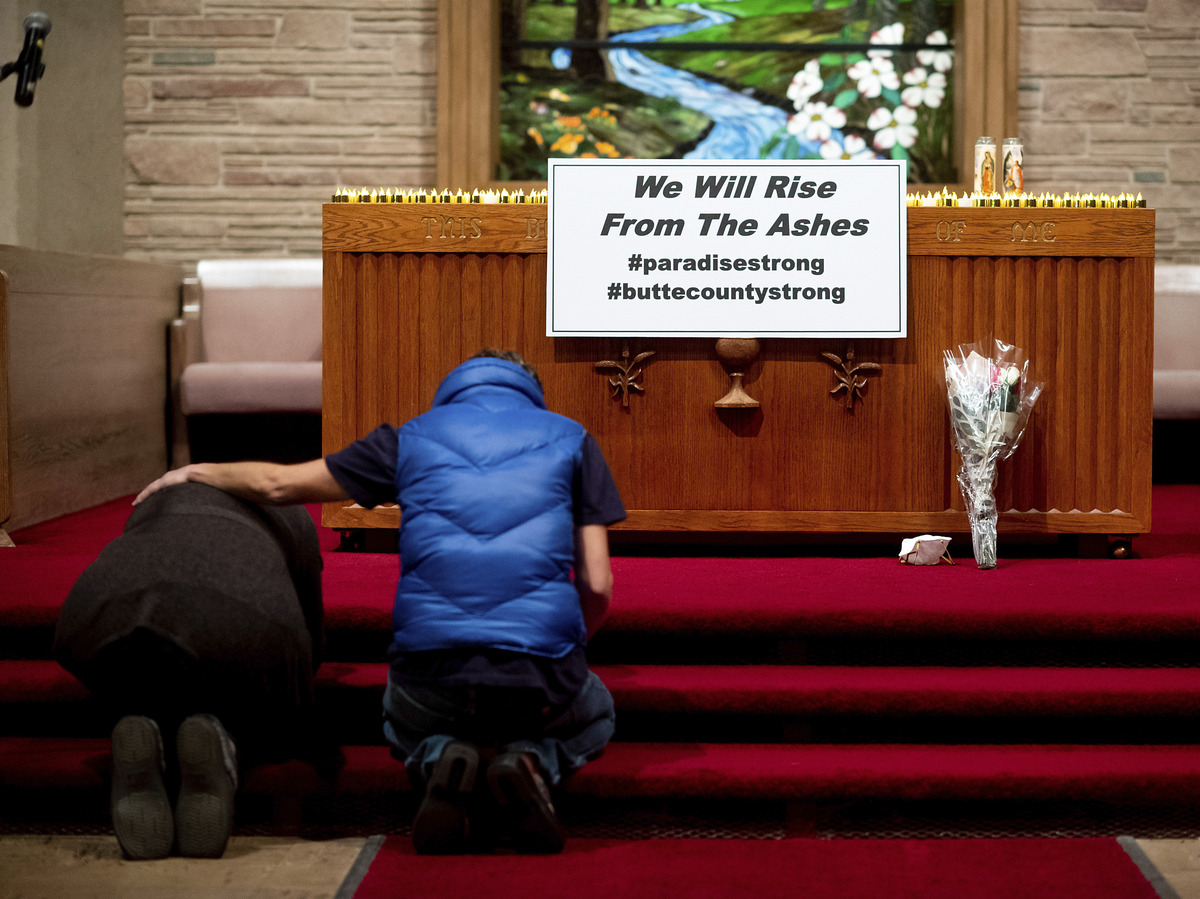 Mourners pray for the victims of the Camp Fire during a vigil Sunday in Chico, Calif. The wildfire killed dozens of people and effectively wiped the entire town of Paradise off the map.

Just a week and a half after deadly wildfires erupted in California, devouring iconic landmarks in the state's south and effectively wiping out an entire town to the north, there's a ray of hope. The Woolsey Fire is nearing full containment around Malibu, while Butte County firefighters are steadily reining in the Camp Fire and may get help in the form of a rain-heavy forecast.

The rain is also likely to help flush out some of the smoke that has pervaded surrounding skies for days on end. Tuesday will be "the final day of hazy/smoky conditions" in the Bay Area, the National Weather Service announced.

Yet the precipitation, which could help one problem, threatens to cause still another.

The National Weather Service has issued a flash flood watch for the regions battered by the Camp Fire from Wednesday through Friday. The agency warns that more than 4 inches of rain could fall by Sunday.

With rain back in the forecast, previously burned areas will experience ash flow. If the rain becomes heavy over one of these burned areas, debris flow may be possible. Be prepared if you live near an affected area. #CAwx pic.twitter.com/ihRACDAp4a

"Properties impacted by the wildfires, and downstream of those areas, are at risk for flash flooding, mudflows and debris flows during periods of intense rainfall," Butte County officials explained in a statement released Monday night. "Wildfires can alter the terrain and soil conditions reducing the capacity for the ground to absorb water creating conditions for these type of hazards."

That means new misery for the survivors of California's deadliest wildfire on record. The Camp Fire has killed at least 79 people, and with the missing still numbering near 700, the death toll may increase in the coming days. Many of those residents who survived are homeless and have been settled in makeshift tent communities outdoors in nearby Chico.

"I'm so at a loss as to what to do and where to go," Jason Young, one of more than 100 evacuees housed in tents beside a local Walmart, told the Chico Enterprise-Record on Tuesday. "We're straight exiled from our homes, whether they're standing or not. It's still where many of us grew up." 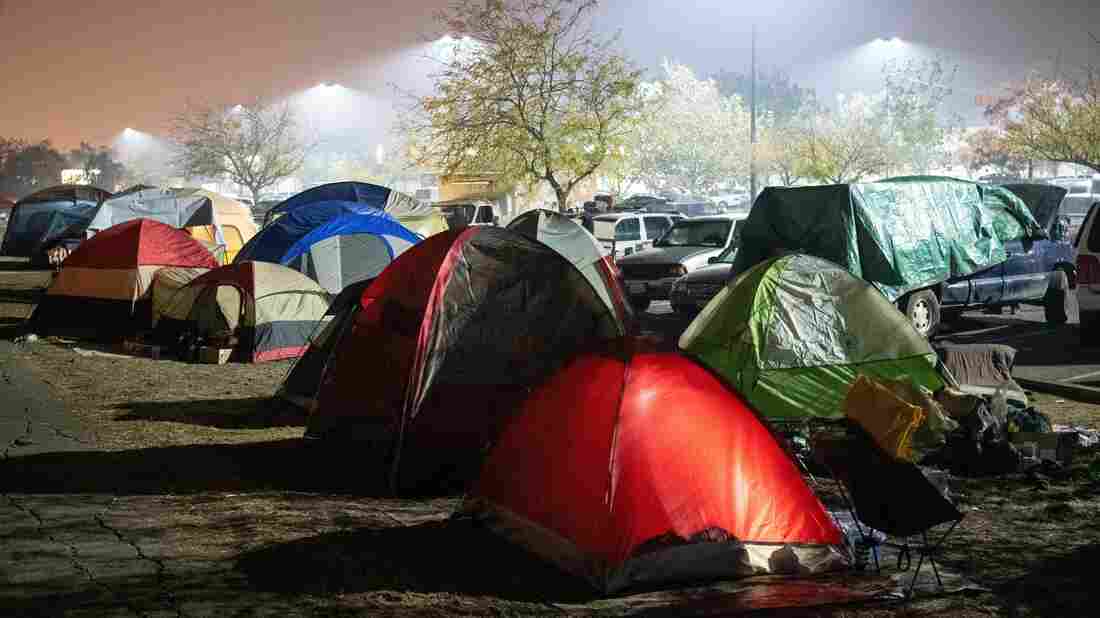 Evacuees retire to their tents for the night in a Walmart parking lot over the weekend in Chico, Calif. The deadliest fire on record in the state has left the living scrambling for answers. Josh Edelson/AFP/Getty Images hide caption 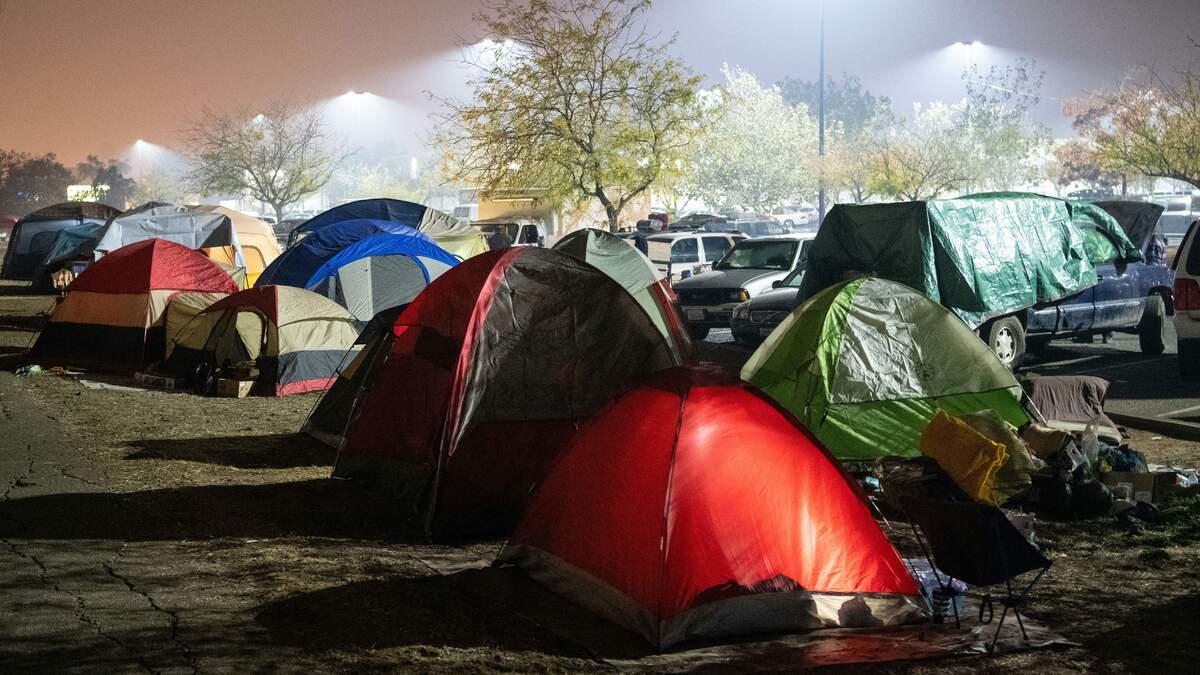 Evacuees retire to their tents for the night in a Walmart parking lot over the weekend in Chico, Calif. The deadliest fire on record in the state has left the living scrambling for answers.

At least half of the six emergency shelters serving evacuees in the area are full, according to member station KQED.

The coming storms also promise a mixed bag for recovery crews and forensics teams in the area, creating a "muddy, mushy mess" — as one expert told Reuters — but potentially easing search efforts in the long run, as well.

"You get rid of the dust, these dogs have a better chance at pinpointing and following their nose to where there may be remains," Shawn Boyd of the state's Office of Emergency Services told a local CNN affiliate.

To the south, as much as an inch of rain also is in the forecast for Los Angeles and Ventura counties, where the Woolsey Fire has burned. And though rainfall totals are expected to be lower than in Northern California, the canyon roads along the Southern California coast have officials and residents just as concerned.

One need not look far to understand why.

When the deadly Thomas Fire ravaged Santa Barbara County late last year, consuming hundreds of thousands of acres north of Ventura, the ashy wastes it left behind gave way to mudslides at the first major rain. More people died in the ensuing mudslides than in the blaze itself, which at the time was California's largest wildfire in history. 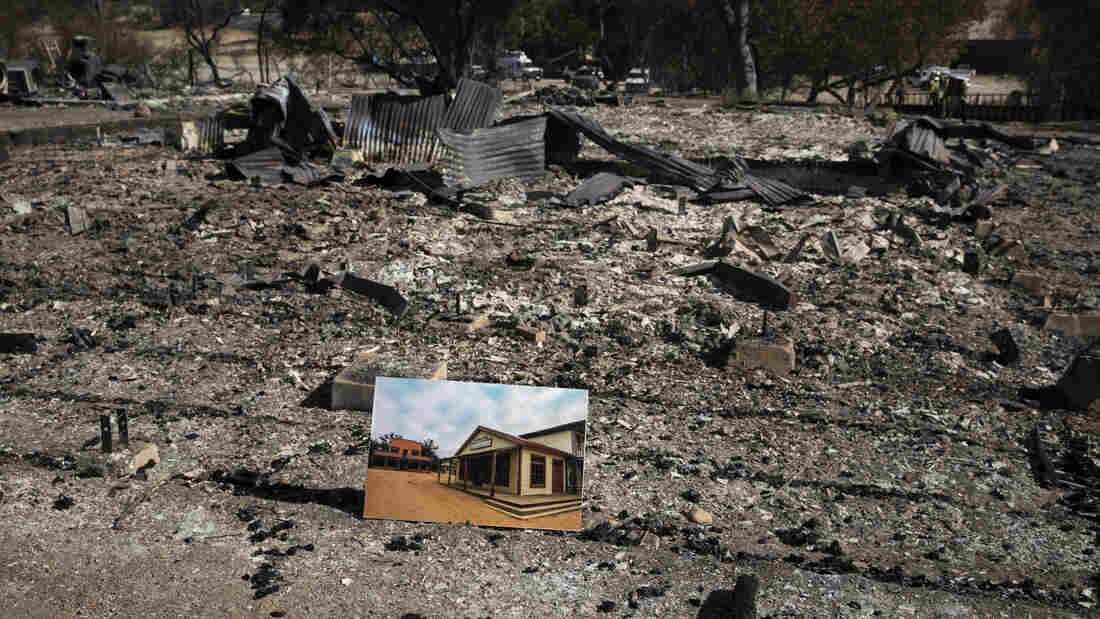 The Paramount Ranch, a national landmark, burned to the ground during the Woolsey Fire. Last week a photograph of the former property sat among its ashes. Jae C. Hong/AP hide caption 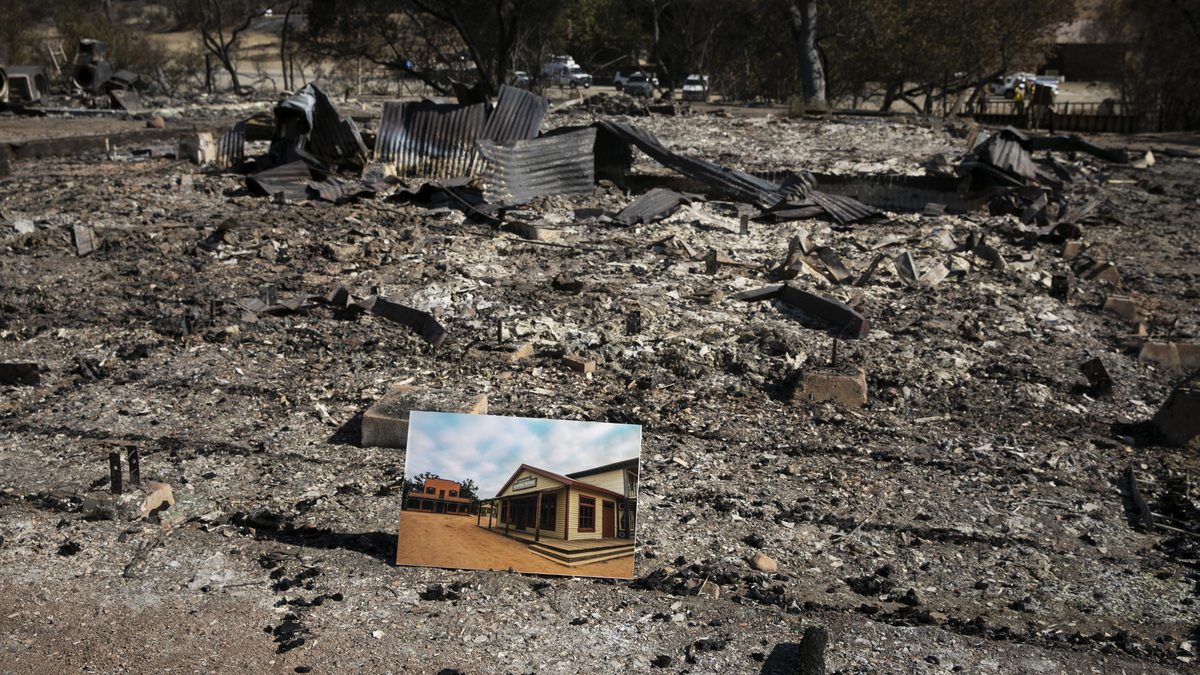 The Paramount Ranch, a national landmark, burned to the ground during the Woolsey Fire. Last week a photograph of the former property sat among its ashes.

It took residents months just to dig their homes out after the 30-square-mile debris flow overwhelmed the community of of Montecito.

"We want people to closely monitor social media and be careful as they re-enter the area, because we have extremely steep terrain that's been damaged by the fire," Capt. Tony Imbrenda of the Los Angeles County Fire Department told a local NBC affiliate.

County officials are warning residents to start picking up sandbags now before the rains.

Still, not all the news that has surfaced lately has been ominous. Authorities expect the Woolsey Fire to be fully contained by Thanksgiving, and thousands of evacuees have been allowed to return home in time for the holiday.

"Time for us to start putting it back together," Malibu Mayor Rick Mullen said in a recorded message to the community. "Reach out to your neighbors who lost everything that was dear to them. It's time for us to count our blessings."