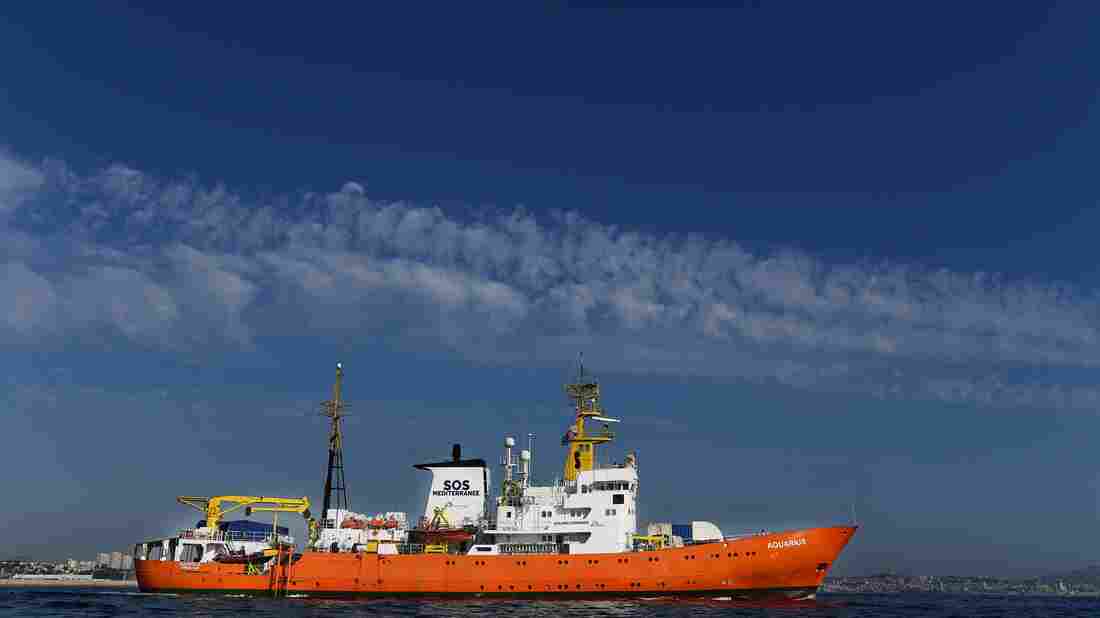 The rescue ship Aquarius, chartered by aid groups SOS Mediterranee and Doctors Without Borders, leaves the harbor of Marseille, France, on Aug. 1. The ship has been docked at Marseille since September, when it lost its registration, and Italian authorities are demanding its seizure. Boris Horvat/AFP/Getty Images hide caption 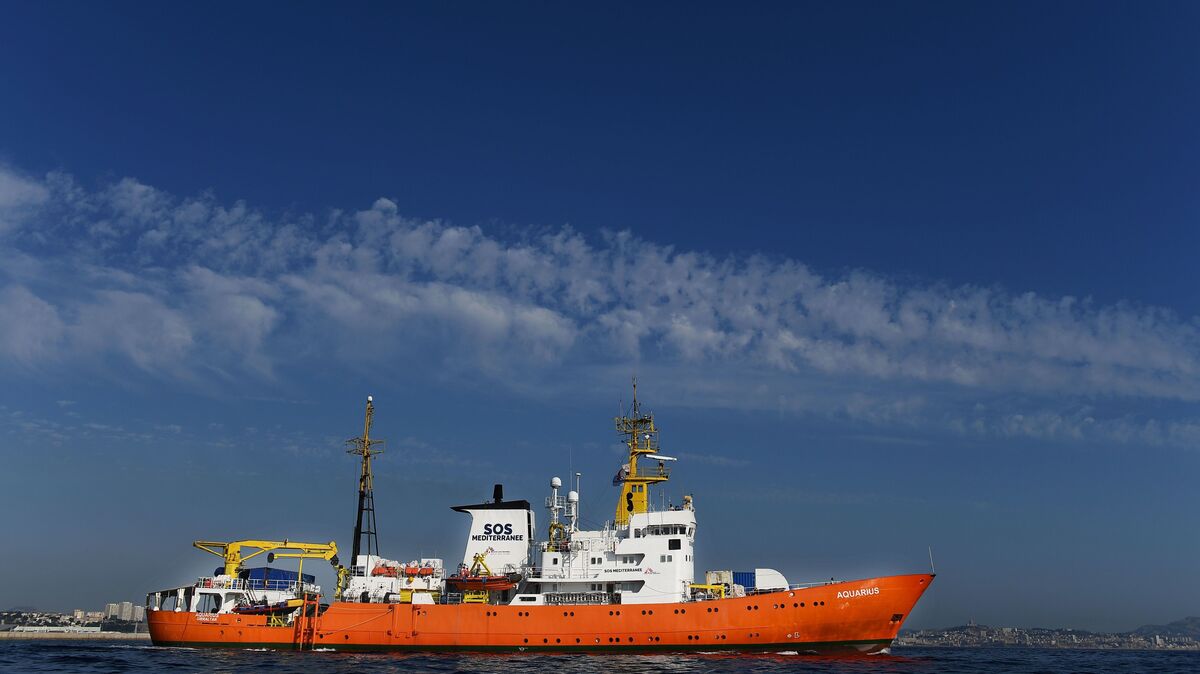 The rescue ship Aquarius, chartered by aid groups SOS Mediterranee and Doctors Without Borders, leaves the harbor of Marseille, France, on Aug. 1. The ship has been docked at Marseille since September, when it lost its registration, and Italian authorities are demanding its seizure.

Authorities in Italy have demanded the seizure of a humanitarian ship used to rescue migrants from drowning in the Mediterranean Sea, alleging that the ship improperly dumped contaminated and medical waste at port — a charge strongly rejected by the nonprofit groups that operate the ship.

Doctors Without Borders and SOS Mediterranee describe the seizure order as an attempt to criminalize humanitarian aid, saying the ship has always followed standard procedure for disposing waste.

The rescue vessel Aquarius made headlines this summer when Italy and Malta closed their ports to it, forcing the ship to carry hundreds of migrants on a days-long journey to Spain.

In September, the ship — the only private search-and-rescue ship operating in the Mediterranean to save migrants — had its registration revoked. It had been flying under a Panamanian flag, but Panama decided that the operation of the ship posed "a political problem" for the government.

Since then, the Aquarius has remained docked in Marseille, France, awaiting a new registration before it can head out for more rescues.

Italian authorities demanded that the ship, operated by Doctors Without Borders and SOS Mediterranee, be seized on Tuesday.

According to Reuters, the Italian officials say that the humanitarian groups operating the Aquarius saved more than half a million dollars in waste disposal costs by failing to declare waste, including migrants' clothes, food and "sanitary waste," that was dumped at ports. Authorities asked that an equivalent sum of money be frozen in Doctors Without Borders' bank accounts.

The officials alleged that the migrants were carrying diseases that could be transmitted through their discarded clothing, Reuters writes. (Alleging that migrants or outsiders are bearing disease has a very long history, as a Stanford study notes, and Europeans in particular have long depicted Africa as dirty and diseased. Here in the U.S., Fox News recently claimed without evidence that a caravan of Central American migrants and asylum-seekers was bringing infectious diseases toward the U.S.)

Prosecutors say 24 people are under investigation, including Doctors Without Borders staff, according to The Associated Press.

It says the request to seize the ship is disproportionate, unfounded and "aimed at criminalising lifesaving medical-humanitarian action at sea."

The group plans to appeal.

"The in-port operations, including waste management, of MSF's search and rescue vessels have always followed standard procedures," MSF said in a statement. "MSF is fully willing to cooperate with Italian authorities but questions the Public Prosecutor's interpretation of the events and refutes accusations that it was involved in criminal activity aimed at illicit waste management of any kind."

In a news conference, Gabriele Eminente, MSF's general director in Italy, expressed astonishment at the charges. He said that since 2015, his group has made more than 200 landings in Italy.

"These are among the most controlled and closely watched moments by Italian police. We would have had to set up illegal activities right under the eyes of the authorities," Eminente said, according to an MSF translation. "We are absolutely surprised and indignant."

"This is another strike in the series of attacks criminalising humanitarian aid at sea," said the group's head of operations, Frédéric Penard. "The tragic current situation is leading to an absence of humanitarian search and rescue vessels operating in the central Mediterranean, while the mortality rate is on the rise."

Both groups emphasized that migrants continue to die attempting to cross the Mediterranean.

More than 2,000 migrants have died so far this year, Eminente said, and survivors rescued by ships that are not dedicated rescue ships are often returned to Libya, where they are kept in "inhuman and arbitrary detention."

Migrants Captured In Libya Say They End Up Sold As Slaves

The BBC notes that Italy's populist government, which campaigned on an anti-immigrant platform, has had an antagonistic relationship with aid groups rescuing migrants in the Mediterranean.

"Italy's interior minister Matteo Salvini, who has long criticised the migrant rescue operations, has accused the charities of collaborating with human traffickers operating out of Libya to run a 'taxi service' to Italian ports," the broadcaster writes. "The Catania prosecutor involved in the latest investigation, Carmelo Zuccaro, has himself suggested in the past that NGOs have had direct contact with traffickers."