Accessibility links
Rapper Tekashi 6ix9ine Indicted For Armed Robbery, Racketeering, Drug Trafficking In an indictment unsealed yesterday in federal court, the rapper — who rose to prominence last year — could face a life sentence if given maximum sentences for the charges. 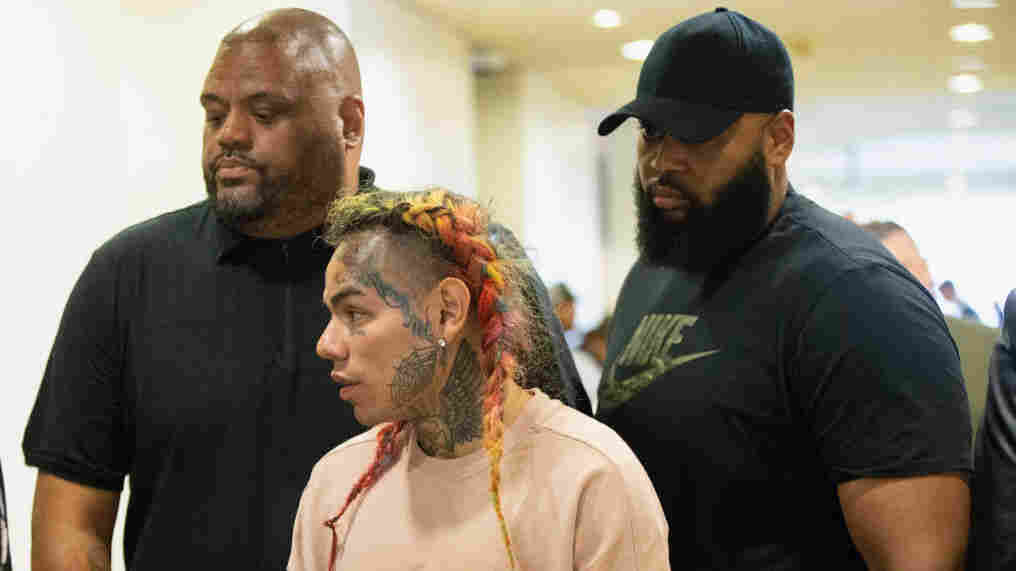 Tekashi 6ix9ine, a platinum-selling rapper who has collaborated with the likes of Nicki Minaj, Kanye West and 50 Cent, was indicted Monday in federal court on numerous charges that include alleged involvement in shootings, armed robbery and drug trafficking.

Prosecutors allege that he, along with four other men named in the indictment, are part of, or associated with, a violent New York City gang called Nine Trey Gangstas Bloods. The charges, which were unsealed on Monday in U.S. District Court of the Southern District of New York, include six counts against the 22-year-old Tekashi, whose birth name is Daniel Hernandez and who is also known as 6ix9ine or Tekashi69.

According to prosecutors, if Hernandez is convicted, the minimum punishment could range from 3 years in prison to as much as a life sentence.

The indictment recounts three specific incidents that allegedly took place earlier this year. In the first, which prosecutors say took place on April 3 near Times Square, members of the Nine Trey gang — including Hernandez — allegedly robbed a man at gunpoint.

In the second incident, which allegedly took place on April 21, one of the other indicted men, Fuguan Lovick, is accused of shooting at a rival inside the popular Barclays Center arena in Brooklyn, though no one was hit. On July 16, prosecutors also allege, an innocent bystander was shot when gang members planned to shoot someone who had been disrespectful to Nine Trey.

As Tekashi 6ix9ine, Hernandez rose to hip-hop fame largely after the debut of his first commercial single, "Gummo," last November; the song went platinum. His mixtape Day69, released in February, debuted at No. 4 on the Billboard albums chart. He went on to collaborate with artists like Nicki Minaj and Kanye West. A recent music video shoot with West and Hernandez was reportedly interrupted by gunfire; in a separate incident in August, gunshots were reportedly fired on the set of a video shoot with Hernandez and 50 Cent. It is not known in either incident who shot the guns.

Last month, Hernandez was given four years' probation after pleading guilty to a 2015 case in which he made and distributed a sexually explicit video with a 13-year-old girl that he then posted online. (An adult man who had sex with the same girl as part of the videos was jailed.)

Last Wednesday, Hernandez pleaded guilty to another charge of disorderly conduct, stemming from a May incident involving what was described in a Pitchfork report as the assault of a police officer in Brooklyn, but which was dropped down to a lesser charge. (That same month, he was arrested in Texas for allegedly attacking a 16-year-old.) He received a one-year probation related to the Brooklyn charge.

The U.S. Attorney's office released a statement on Monday saying that the federal indictment was the result of a cooperative investigation that involved the New York Police Department, Homeland Security Investigations and the Bureau of Alcohol, Tobacco, Firearms and Explosives (ATF).

During court time on Monday, the New York Times reports, it was also revealed that the FBI had this past weekend warned the rapper that there were possibly death threats made against him by members of the gang.

Pitman denied Hernandez' request for bail on Monday, saying that during a September FBI raid of Hernandez' apartment, agents found a backpack allegedly taken during the April robbery. The backpack contained the credit cards and ID belonging to the man who had been robbed, and agents also found an AR-15 weapon. In addition, prosecutors say that Tekashi was captured on surveillance video during the April 3 incident.

Last week, the rapper gave an extended interview to popular talk show The Breakfast Club on 105.1 FM in New York, saying that he had fired his entire management team. In the course of that conversation, Hernandez also professed to be scared of only two forces: "God first," he said, "and the FBI."