Accessibility links
Georgia Set To Remain A Battleground For Voting Rights Ahead Of 2020 Perhaps more than any other state in the last decade, Georgia has put new restrictions on voting, which became a central issue in the recently concluded governor's race. 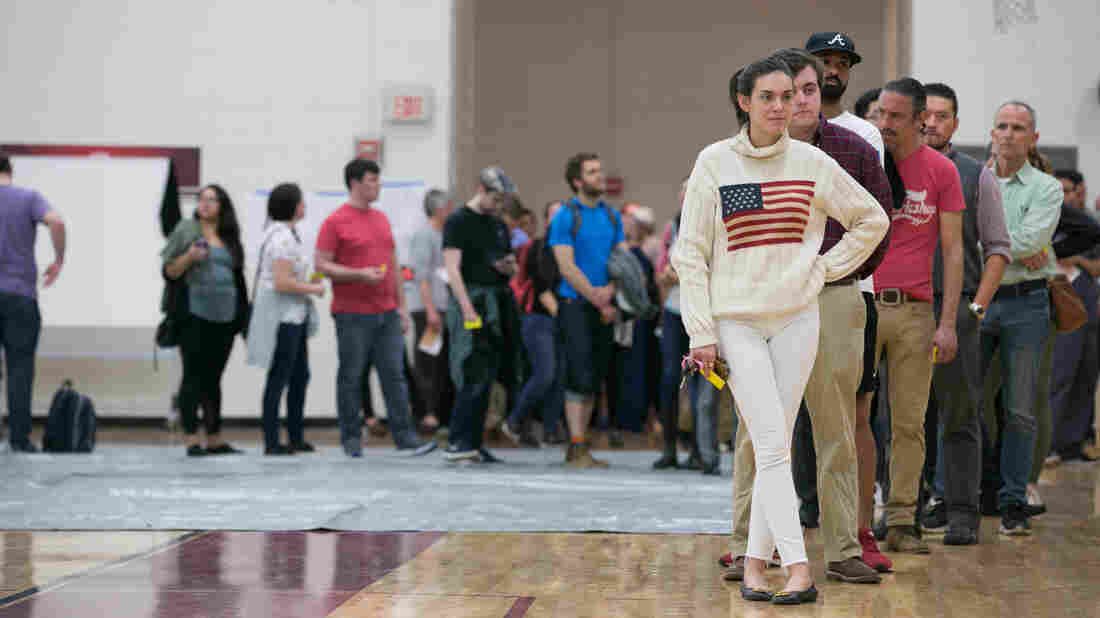 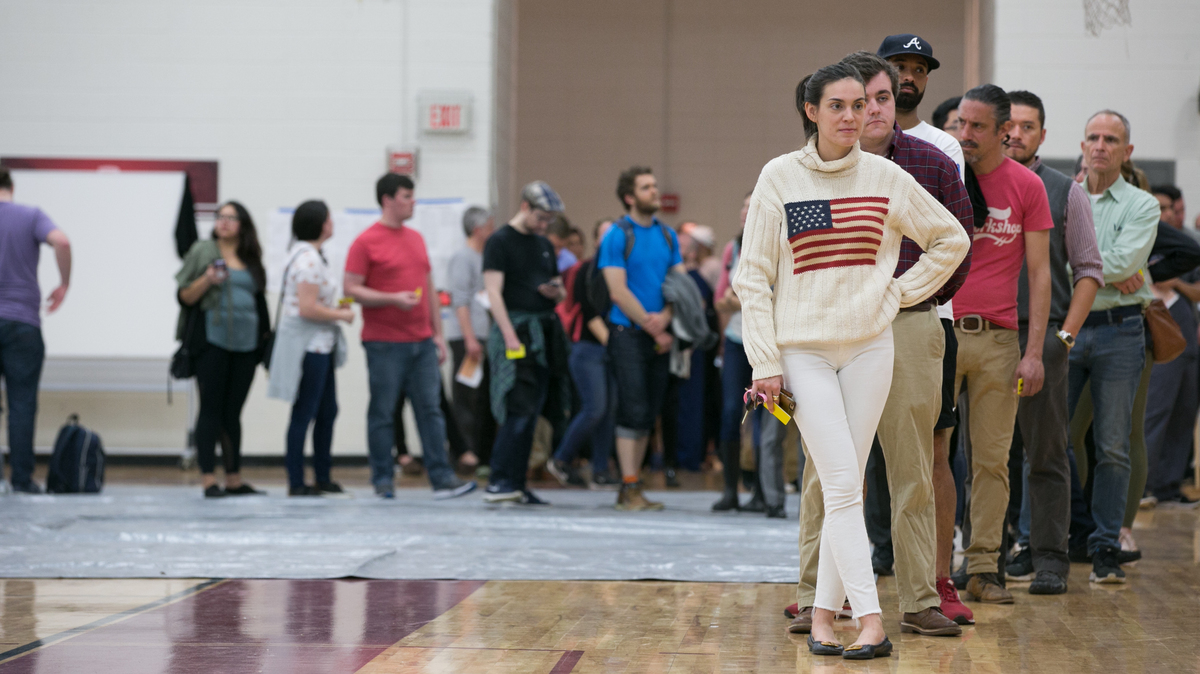 When Democrat Stacey Abrams ended her bid last week to become governor of Georgia and the first black woman ever elected governor of any state, she issued a stinging indictment of Georgia's voting system, a system overseen by her Republican opponent Brian Kemp, who was the state's top election official during the 2018 midterms.

"Democracy failed Georgia," said Abrams in a speech acknowledging Kemp would be the state's next governor.

"Make no mistake, the former secretary of state was deliberate and intentional in his actions," Abrams said. "I know that eight years of systemic disenfranchisement, disinvestment and incompetence had its desired effect on the electoral process in Georgia."

In an interview this week with NPR, Abrams spoke about how she was nearly denied the chance to vote in person this year due to a clerical error.

Abrams said she's preparing to sue the state of Georgia for "the gross mismanagement" of the 2018 election, and announced the launch of "Fair Fight Georgia," an initiative to "pursue accountability in Georgia's elections and integrity in the process of maintaining our voting rolls."

For months, Kemp resisted calls from Democrats and civil rights groups for him to step aside from his role as the state's top election official. He was also criticized for policies making voting more difficult for people of color, in order to gain a political advantage.

Kemp's campaign called these criticisms a strategy meant to motivate Democratic voters. Georgia's population is growing and Kemp pointed to record-breaking voter registration and turnout statistics to make the case his policies made it easier to vote and harder to cheat.

According to the United States Election Project, a record 55 percent of eligible voters turned out in Georgia this month, compared to less than 40 percent turnout in the 2014 midterms. And the number of registered voters in Georgia has grown since Kemp was first elected in 2010. Then, 5.8 million Georgians were registered to vote, compared to 6.7 million registered voters in the 2018 election, a number that is in line with the state's population growth in that period.

Since Abrams acknowledged Kemp won the election, he has said little about voting, and refrained from attacking back, a change from when he was secretary of state, and a candidate for governor.

"The election is over and hardworking Georgians are ready to move forward," Kemp said in a statement after Abrams effectively conceded.

But over the last decade, Kemp and Georgia's Republican-controlled statehouse put up new obstacles to voting in the name of fighting fraud, even though there's no evidence of widespread voter fraud in the state.

In defense of these policies, outgoing Republican state Sen. Josh McKoon said a lack of evidence doesn't mean voter fraud is not an issue.

"You know, if I come home," said McKoon, "And termites aren't visibly present. That doesn't mean that I don't have a serious pest problem."

Perhaps more than any other state in the last decade, Georgia has put new restrictions on voting.

In a 2018 report, the U.S. Commission on Civil Rights, a federal agency, focused in on five voting rights issues: voter ID requirements and proof of citizenship requirements, purges from the voter rolls, cuts to early voting, and moving or eliminating polling locations.

"Georgia is leading the country in moving backwards with respect to that core democratic right of voting," said the commission's chair, Catherine Lhamon, an appointee of former President Barack Obama.

"That's dangerous to the fabric of our understanding of who we are as a nation," said Lhamon. "And it is dangerous to ensuring that government is appropriately responsive to its citizens and that that each of us actually has a chance to make our voices heard."

Georgia's voting policies drew renewed scrutiny ahead of the 2018 election.

An investigation from APM Reports, the podcast Reveal and WABE found 107,000 people were removed from Georgia's voter registration list, largely for not voting in previous elections.

This practice, sometimes called "use it or lose it" was approved by the U.S. Supreme Court in a 5-4 decision this year.

In early October, the Associated Press found 53,000 voter registration applications were on hold, many because of small errors, like a missing hyphen. Of the applications on hold, the AP found nearly 70 percent were from African-American registrants.

Subsequent reporting by Georgia Public Broadcasting found that that nearly 47,000 names on that list did not match federal or state databases but that some included clearly fake names, such as "Jesus Christ," and "Magic Mike," and that some of the registrants gave non-residential addresses.

"It's gotten harder to vote" in Georgia, said Helen Butler, executive director of the civil rights group, Georgia Coalition for the People's Agenda.

Since Butler started working in Georgia in the early 2000s, the state has implemented online voter registration and early voting, which she acknowledged make voting easier and more convenient.

But she said obstacles like voter ID, for example, passed by the Republican-controlled legislature in 2009, still stand in the way of people of color and young people, who are more likely to vote for Democrats.

"If you can target and narrow down the people that you're going to focus on," said Butler. "It makes it easier for you to get elected."

Republicans, like state Sen. McKoon, dispute the criticism they've made it harder to vote for political gain.

"I think that for somebody to vote they ought to at least pass a very small bar of filling out the personal information and getting registered," he said. 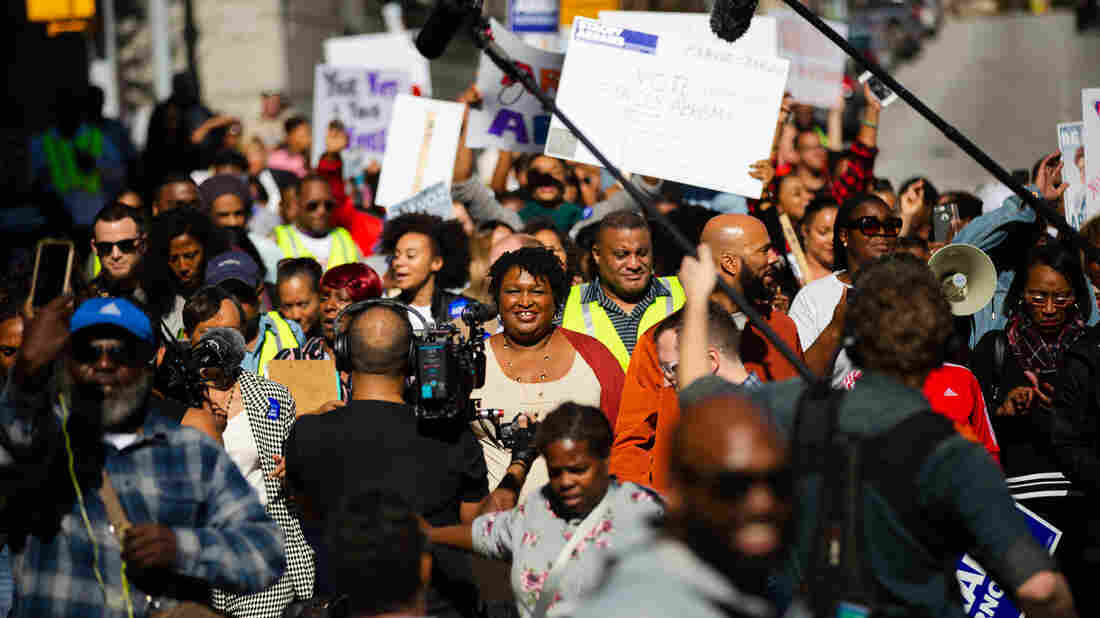 Stacey Abrams, then the Democratic nominee for governor of Georgia, center left, and musical artist Common, center right, lead a Souls to the Polls march in Atlanta, Ga., on Oct. 28, 2018. Bloomberg/Bloomberg via Getty Images hide caption 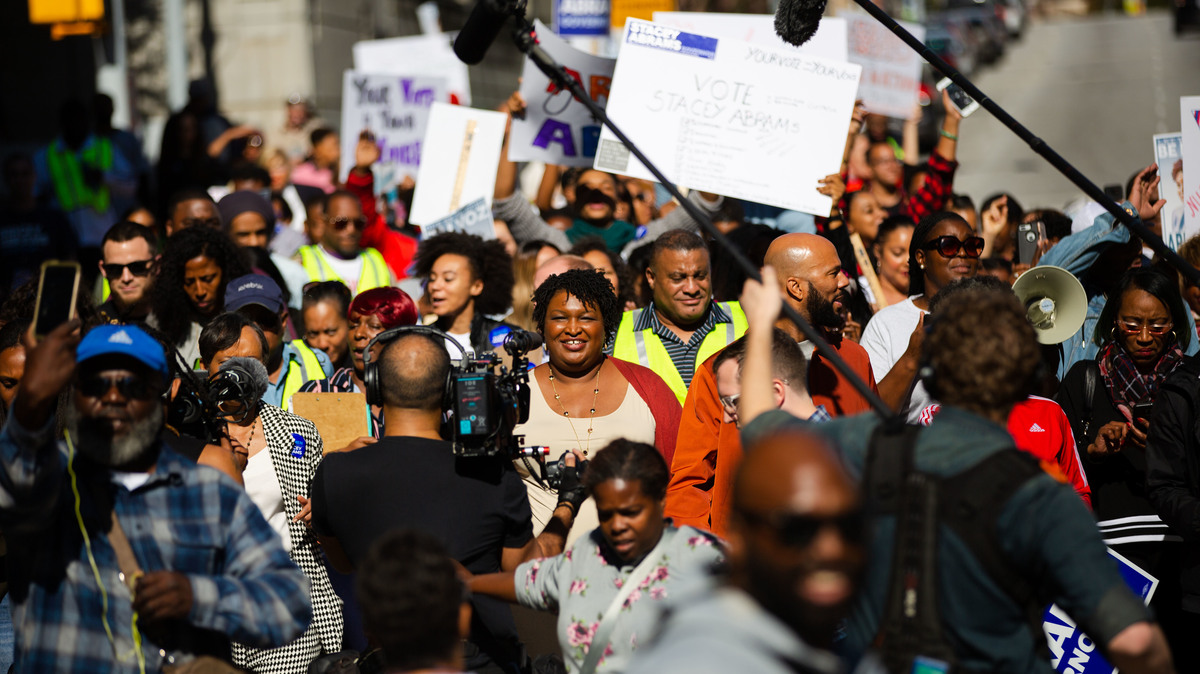 Stacey Abrams, then the Democratic nominee for governor of Georgia, center left, and musical artist Common, center right, lead a Souls to the Polls march in Atlanta, Ga., on Oct. 28, 2018.

On election night, Abrams refused to concede despite Kemp having a lead of thousands of votes in initial returns. She justified her position saying every vote deserved to be counted. And the Abrams campaign had hoped uncounted absentee and provisional ballots would push the race to a runoff, which is triggered under Georgia law if no candidates gets 50 percent plus one vote.

Heavy turnout, issues with aging voting machines and miscalculations by county election officials led to at least four-hour waits in some Democratic-friendly areas.

College students, many of them first-time voters, were forced to cast provisional ballots because they showed up at the wrong precinct on Election Day to vote.

More at stake than the midterms

The race between Abrams and Kemp has brought into focus an issue bigger than who is Georgia's next governor.

As politicians elected in the 2018 midterms prepare to take office, they face the task of restoring trust in the contested and questioned voting process used to put them there.

And the 2020 presidential contest is looming, when doubts about election results in potential battleground states like Georgia, Florida and Arizona could raise the stakes even higher than those in a midterm year.

Members of both parties after the 2018 midterms raised questions about results.

President Trump and Republicans accused Democrats, without evidence, of trying to steal elections.

Democrats said voting laws made for an unfair fight, because they disproportionately kept people of color and young people, likely Democrats, from casting ballots.

The often highly partisan battles over voting run the risk of undermining faith in the entire system — and the results the system produces.

Imani Soyinka was one of the college students who showed up at the Fulton County election office in Atlanta, a few days after the Election Day, to ensure her vote would be counted in at least statewide contests.

But she left unsure her vote was counted.

"I guess I kinda' feel disrespected," Soyinka said, "We're voting for a reason, it's not just like we're voting because we wanted to."

For Soyinka, the fact Kemp was overseeing the election, even though his name was on the ballot, made her less trusting of the system.

"It's not fair. But no elections are fair. It's not fair anywhere really," she said. "You can't stop being active because there's so much unfair and unjust in America, you just have to keep trying your best."