Accessibility links
'Creed II' Isn't In The Same Weight Class As 'Creed,' But It's Got Heart The sequel to 2015's winning overhaul of the venerable Rocky franchise is "is a more listless and ordinary film than Creed by any measure, but still a rewarding one." 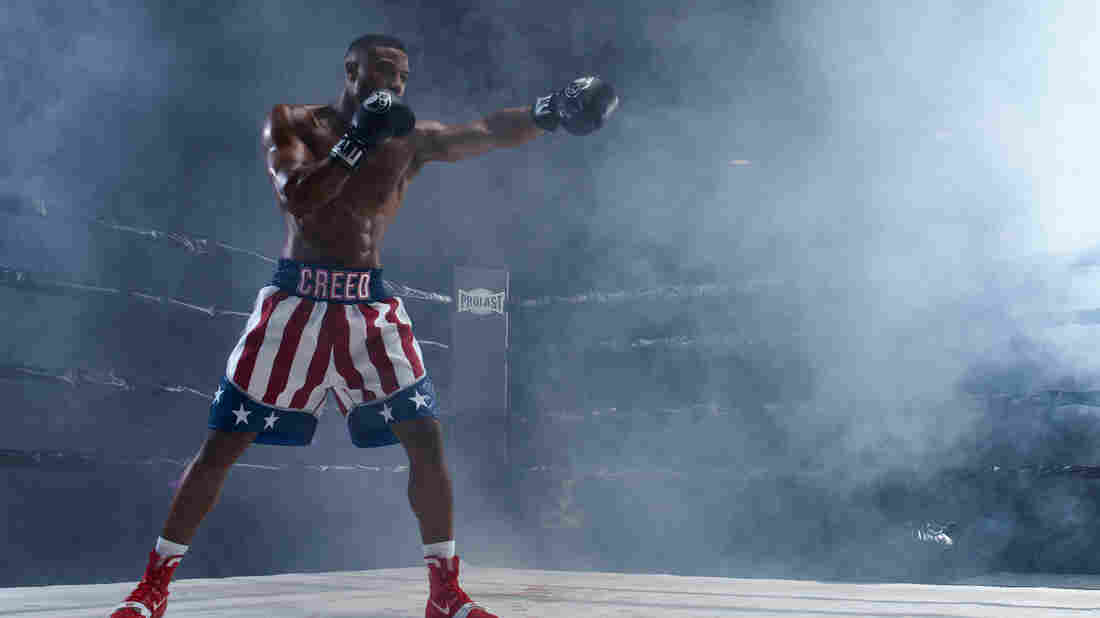 Michael B. Jordan is back on his beatdowns as Adonis "Donny" Creed in Creed II. Frank Ockenfels/Annapurna Pictures hide caption 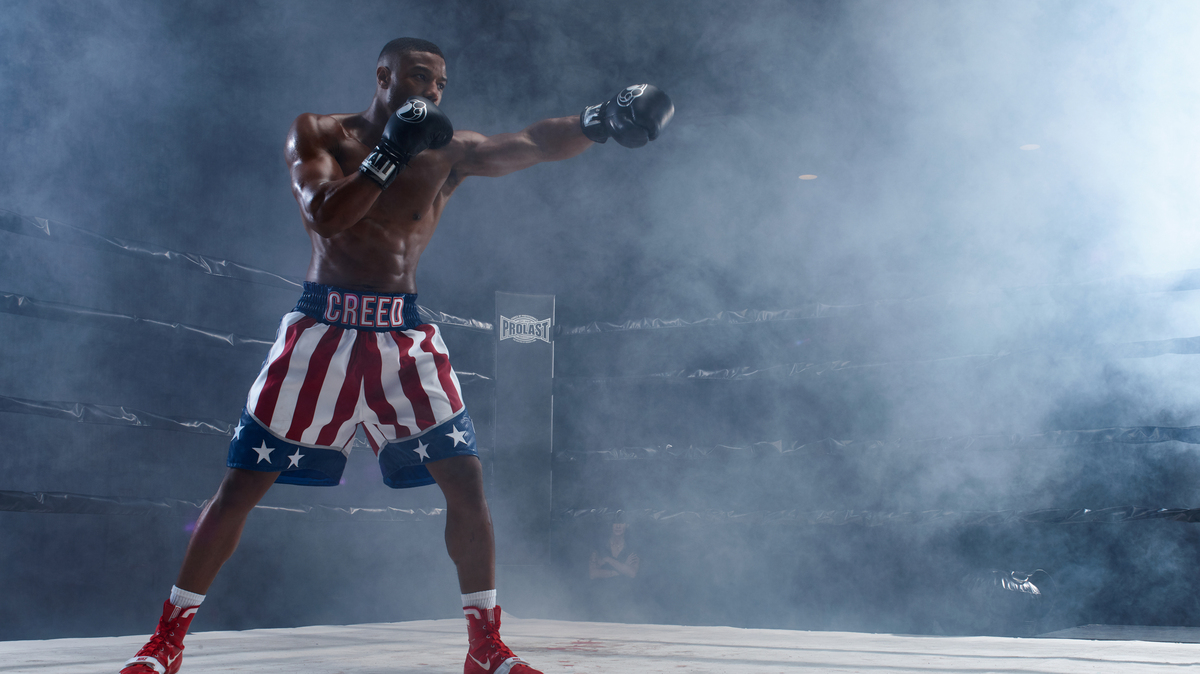 Michael B. Jordan is back on his beatdowns as Adonis "Donny" Creed in Creed II.

In 1985's Rocky IV, the most most high-and-tight entry in the formerly-shaggy Rockiad, an age-obsessed Apollo Creed (Carl Weathers) laments to his opponent-turned-pal Rocky Balboa (Sylvester Stallone) that "we're turning into regular people." Apollo's obsession with proving he can still compete after half a decade in retirement leads him to pursue an exhibition match with genetically engineered Soviet supercomrade Ivan Drago (Dolph Lundgren), who beats Apollo to death. It's a 91-minute movie that's at least one-third montage, and shorn of the rough edges that made its predecessors so winning, it was the biggest hit of the series.

Three decades later, 2015's Creed didn't redeem the creaky franchise — its prior entry, 2006's Rocky Balboa, was almost as favorably received and successful as Creed was, and neither of those late, great entries banked nearly as much cash as their dumber 1980s predecessors. But Creed indisputably re-lit the torch, giving us an ascendant pair of stars in Michael B. Jordan and Tessa Thompson, an astute young storyteller in co-writer/director Ryan Coogler (who'd go on to make Black Panther), a renewed sense of Philadelphia as an environment and a warm chemistry between Michael B. and Sly, in one of his finest, most vanity-free performances.

It would be almost impossible for Creed II to land with the same force, and unlike Rocky Balboa or Adonis Creed, it doesn't defy the odds. This is a more listless and ordinary film than Creed by any measure, but still a rewarding one, inviting us to share "Donny" (Jordan) and Bianca's (Thompson) prosaic struggles with new parenthood and their flourishing careers in, respectively, prizefighting and music — professions that seldom offer stability or longevity — while Donny weathers his first experience of defeat. Their maturing relationship is persuasively dramatized; the unconvincing rift that develops in the Donny-Rocky bond when Rocky urges Donny not to fight, less so. Rocky is, as his dead pal Paulie used to tell him, "all heart" and zero calculation, but even he ought to figure reverse psychology would work better at this point: Yo, kid, we all know you could take this scary guy who outweighs you by like 40 pounds, no problem. Of course you could. No need to get your skull caved in proving it.

At once hypermasculine and shamelessly shamelessly schmaltzy, these Rocky/ Creed movies have always treated their heroes' compulsion to prove themselves and re-prove themselves (and also to reproof themselves) as an incurable mental illness that they and their partners and friends just have to manage. For those of us who can't help but watch them through a forgiving lens, it's enough simply to spend time with these characters while we wonder what featherweight variation on the lose-suffer-reflect-win formula this installment might dare. (1990's Rocky V, the entry that messed with the recipe the most, was an unloved flop that left the series in a coma for 16 years.)

Well. There are four writers credited here, including Luke Cage showrunner Cheo Hodari Coker and Sylvester (F.IS.T., Stop! Or My Mom Will Shoot) Stallone, who wrote I-VI himself. Whichever scribe came up with the specific gesture that ends Creed II's climactic bout deserves a raise. Rocky movies are a genre within a genre, and their audiences expect or even demand they be 95 percent predictable. So when they're even ten percent surprising — a generous estimate of Creed II's novelty quotient — it feels like a win.

This movie is as much a follow-up to Rocky IV as it is to Creed, bringing back Dolph Lundgren as Ivan Drago, a bitter Ukranian whose life in what was then still the Soviet Union never rebounded from his humiliation — in front of Premier Gorbachev himself, or at least a non-terribly-persuasive lookalike — at the hands of the little American. He probably doesn't understand that his son Viktor, played with palpable menace by the hulking Florian "Big Nasty" Munteanu, is exactly like Rocky was when we met him all those decades ago, making his humble living through hard labor while training and taking amateur fights in his spare time. This irony is just present enough to make you wish Lundgren and Munteanu had more screen time. You also wish the writers had taken another crack at the scene where Ivan visits Rocky at his humble Italian restaurant. ("Izzat you?" Stallone asks.) Their confrontation should be charged with electricity, but it's weirdly inert. Maybe Stallone and Lundgren used up all their juice is those terrible Expendables flicks.

Anyway, a crafty promoter played by Russell Hornsby knows that if he can get the Son of Drago into the ring with the Son of Creed it'll be a huge score. He also knows how manipulate Donny into saying yes, over the objections of everyone who cares about him.

Where Rocky IV framed its big battle as one between state-owned Soviet technology versus, um, rural Jeffersonian individualism — Rocky pulls his entourage behind him in a horse cart, hilariously, and later leaves his KGB chaperones skidding in the snow as he runs up a mountain — Creed II becomes an examination of different family dynamics. Viktor Drago appears to live a Spartan existence, hoping to earn his stern pop's elusive approval. Donny, meanwhile, is bathed in love, from his wife and infant daughter, his stepmom (Phylicia Rashad), from his "Unc" Rocky, and from his fanbase in Philly.

Director Steven Caple, Jr. is, like Coogler before him, a filmmaker with only a single, well-liked indie feature on his resume, 2016's skateboard odyssey The Land. (He's also done some TV.) He doesn't bring the same observational curiosity to the material that Coogler did, but that may just be a consequence of the fact this film is 20 minutes shorter than Creed. At least he managed another big deposit in the series' fat account of top-notch training montages. These are always better when they're shaped around a specific goal; this one, in the New Mexico desert, has Donny developing new close-quarters tactics intended to negate his hulking opponent's superior reach. Connoisseurs of shirtlessness will note with approval that Jordan has bulked up past his physique of three years ago, selling Donny's move up to the heavyweight division. And once again, his fight work eclipses anything in the 20th century Rocky films.

Ironically, the pretend match-up (and Russian rematch-up) in Creed II turns out to be the last fights called by the gold-standard HBO Boxing team of Jim Lampley, Max Kellerman, and Roy Jones, Jr., who reprise their roles from Rocky Balboa, The Fighter, Creed, Southpaw and other 21st century sports flicks as themselves. HBO announced at the end of September that it was scuttling its boxing division after 45 years. Long-lived franchises do eventually quit, the happy dissent of Creed II notwithstanding.