Accessibility links
Climate Change Slows Oil Company Plan To Drill In The Arctic Development of the first oil production facility in federal Arctic waters will take longer than planned. That's because warming temperatures are melting the sea ice needed to build it. 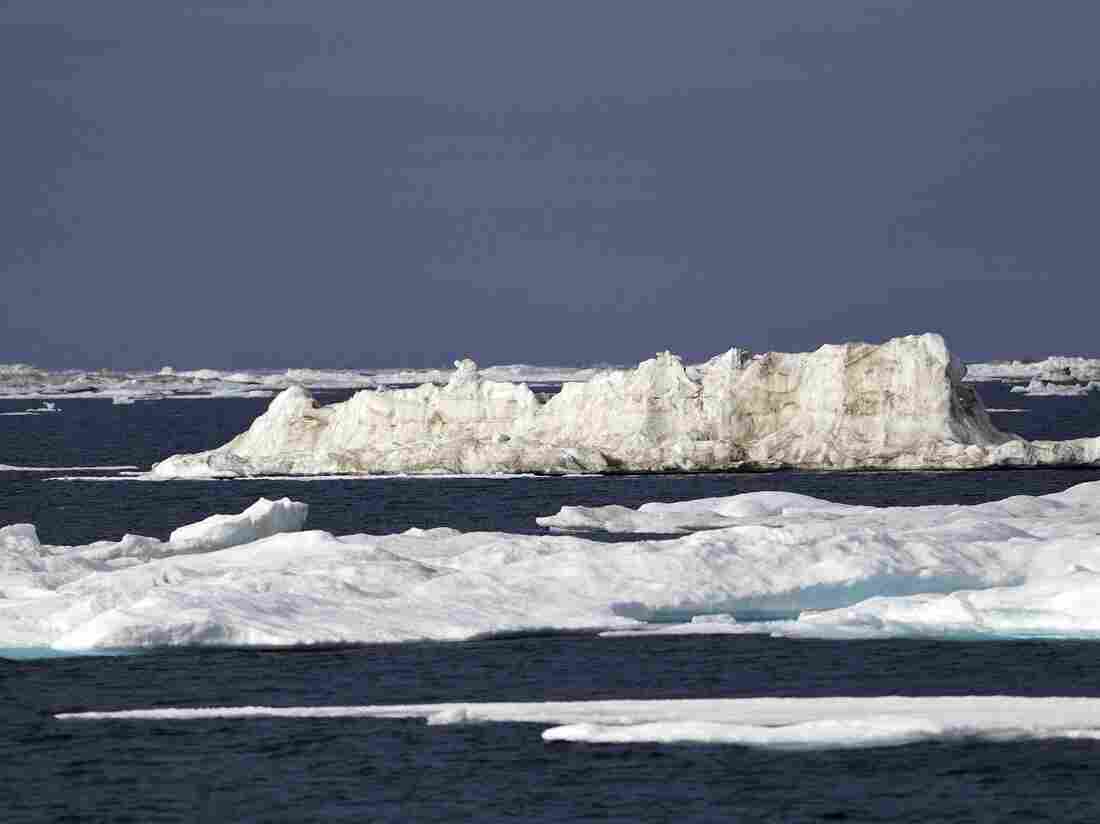 In the Beaufort Sea off the coast of Alaska, global warming is melting sea ice and glaciers at an historic rate. David Goldman/AP hide caption 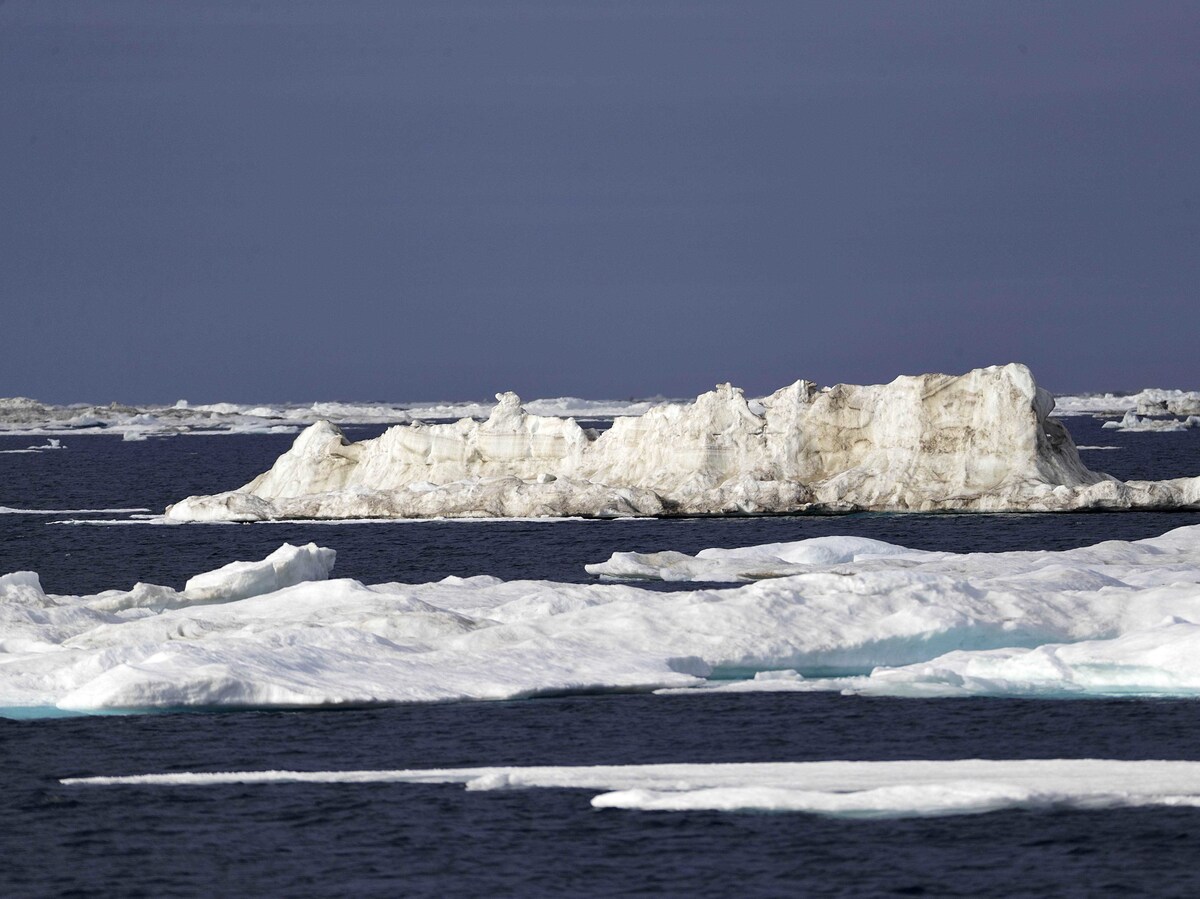 In the Beaufort Sea off the coast of Alaska, global warming is melting sea ice and glaciers at an historic rate.

A milestone oil development project in Alaska's Arctic waters is having to extend its construction timeline to accommodate the warming climate. The recently approved Liberty Project — poised to become the first oil production facility in federal Arctic waters — has altered its plans due to the shrinking sea ice season.

The challenge comes as the Trump administration has reversed an Obama-era policy and proposed re-opening the majority of Alaska's federal waters to drilling. It's pushing to hold a lease sale in the Beaufort Sea next year. The lease for the Liberty Project pre-dates the Obama-era ban on oil development in Arctic waters.

To get at the oil targeted by the Liberty Project, Texas-based oil company Hilcorp is planning to build a gravel island about five miles from shore, in the shallow waters of the Beaufort Sea, and drill from there. In order to build that island, Hilcorp needs to use what's called landfast sea ice, or ice that attaches to the coast each winter. Hilcorp would build an ice road on top of it, and transport the gravel in dump trucks.

"When it's in place and when it's stable, it makes, actually, a fairly convenient platform from which to operate," says Andy Mahoney, a sea ice researcher at the University of Alaska Fairbanks. He provides information to oil companies and federal regulators on ice thickness, extent, and seasonal duration. He says operating from sea ice can be easier than trying to work from a ship or barge.

But Mahoney says a primary concern he hears from oil companies these days is that the window they have to work on sea ice is shrinking as the Arctic warms. Rising temperatures, of course, are driven by the burning of fossil fuels, and the Arctic is warming more than twice as fast as the rest of the world.

Mahoney's research shows that the landfast ice on the Beaufort Sea is forming later, and breaking up sooner than it used to. Between 1973 and 2008, satellite data showed the seasonal duration of the ice shrank by around 7 weeks. Mahoney says it's likely declined even more since then.

For oil companies, that can mean work they'd planned to complete over one winter may now take two. Apparently, that's happening to Hilcorp, according to construction plans the company has provided to regulators.

There are also other ways that a warming Arctic may affect companies that pursue offshore drilling projects.

"With the projections of declining sea ice you would expect the waves to get bigger and bigger, and in fact that's what is being seen in the Beaufort Sea," says Jeremy Kasper, an oceanographer at the University of Alaska Fairbanks.

Kasper is currently leading a study for BOEM trying to better understand wave and sediment dynamics in the area around Hilcorp's Liberty project. A large part of the focus is the potential impacts of Hilcorp's development on the marine environment. But researchers are also going to model how wave height, storm surge and coastal erosion may change along the whole Beaufort coast, and part of the Chukchi coast, decades into the future as the climate warms.

Kasper says those changes could mean that companies have to plan for increasing erosion around their pipelines, or higher wave conditions. "If you increase the waves, you're talking about [needing] bigger boats," he says. "Bigger boats, you have to start thinking about dredging, because it's pretty shallow up there."

Kasper says all this will add to the cost of drilling oil in the Arctic. Companies will have to spend money to assess how future changes may impact their operations, and then potentially spend additional money to deal with them.

It's not just offshore production in Alaska that faces challenges from climate change. The oil industry is having to grapple with thawing permafrost under critical infrastructure. And in March, Alaska officials said that warm temperatures last winter — warmer than any winter on record in Alaska's Arctic — contributed to a decline in oil production. According to Reuters, Alaska Revenue Commissioner Sheldon Fisher told state lawmakers, "We actually do better when the winter is colder. The equipment operates better and they're able to accomplish more with colder weather."

Still, along with all these challenges, researcher Andy Mahoney points out that the warming climate may also create new opportunities. He says the increasing retreat of sea ice around the Arctic is opening up possible new areas for oil exploration and drilling.