Accessibility links
In China, The Communist Party's Latest, Unlikely Target: Young Marxists Chinese authorities are cracking down on student activists, exposing a paradox between a state founded on Marxist principles and the young people it calls upon to carry them out. 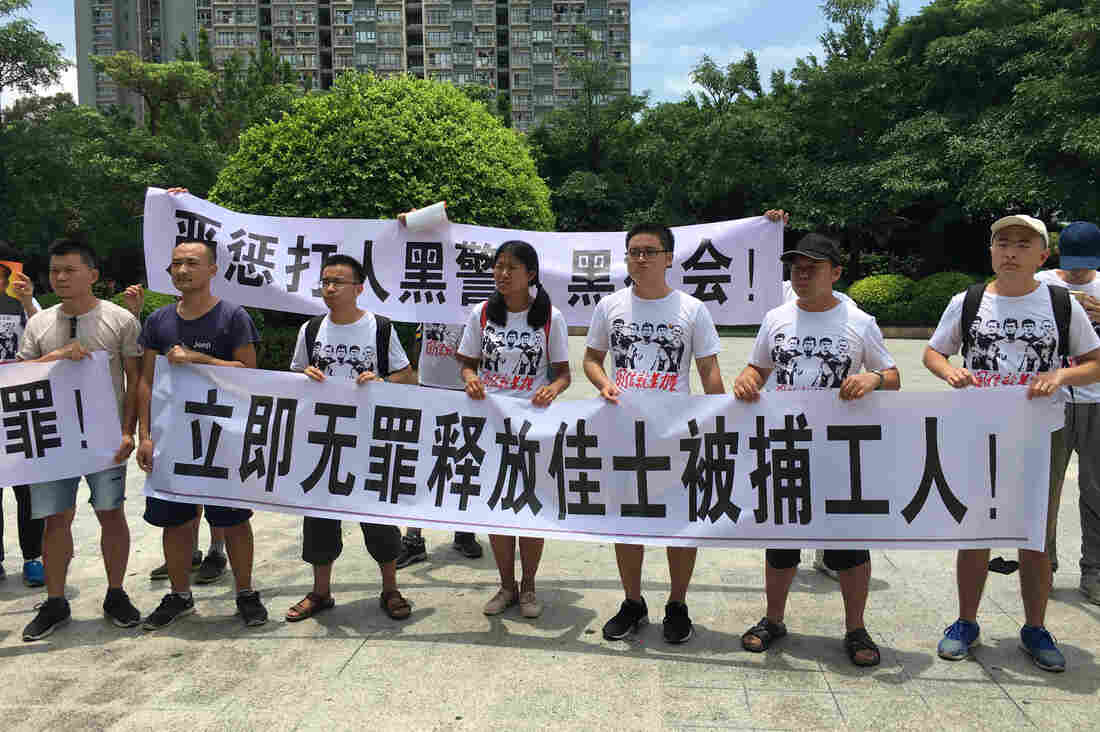 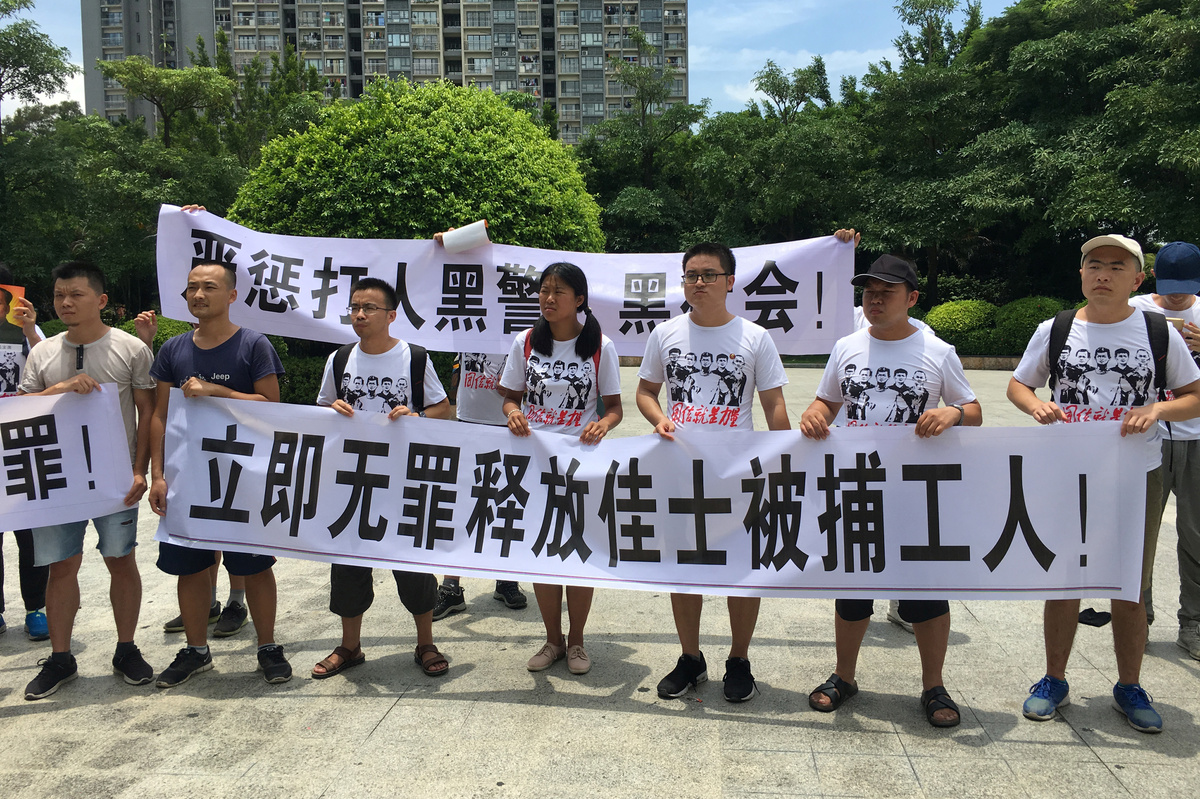 Demonstrators hold banners in support of workers at the Jasic Technology factory in Shenzhen, in China's Guangdong province, on Aug. 6.

When he started at Beijing's Renmin University, one of China's best schools, a freshman scanned a list of student clubs and landed on the one that made him the most excited: Young Marxists.

"I'm from a working-class family in the countryside," he says. "Very few students with my background could have made it to my school. I liked that this group pays attention to the issues of workers and farmers, so I joined."

He was also interested in studying the works of 19th-century philosopher and economist Karl Marx; works that inspired the founders of China's Communist Party. Young Marxists aim to put the thinker's ideas into practice on Renmin University's campus.

The student, now in his senior year, is not being named to protect his identity from authorities. Young people who belong to Marxist groups have recently become the unlikely targets of a state crackdown due to their zeal to help educate and mobilize China's working class to fight for their rights. The conflict has exposed a paradox between a party founded on Marxist principles and the very young people it has tasked with carrying those principles out.

"We organized a tai chi group for the men who worked on campus and a square dancing group for female staff," the student says. "We taught illiterate senior workers how to read and write, and we offered night classes in labor law to migrant workers. We set up a free clinic for them, too."

By doing so, he and his young comrades believed they were "serving the people," he says, making good on the promise of Chinese Communist leaders echoing all the way back to founding father Mao Zedong; a promise that's been resuscitated by China's current leader.

"As Communists, we should incorporate Marxist classics and principles into our lifestyle and treat Marxism as a spiritual pursuit," President Xi Jinping said at an event celebrating the bicentennial of Marx's birth in May.

But this August, police arrested more than 50 student activists, many of them members of college Marxist groups, for helping organize workers at Jasic Technology, a welding equipment factory in the southeastern Chinese city of Shenzhen. At least two Peking University graduates remain missing. Footage of the police operation was posted to YouTube by Voice of America, a U.S. government-funded news service.

"After the raid, police from my hometown, my parents, grandparents, relatives, and my old high school and middle school teachers came to take me home," says a student, who was arrested for defending Jasic's workers in August. Her name is also being withheld to protect her identity.

She is also a senior at Renmin University and serves in the Young Marxists group. She says nearly two dozen of her relatives and teachers from her hometown schools traveled hundreds of miles, at the behest of police, to persuade her to stop protesting for workers' rights. When they arrived back in their town, they continued to try to convince her she was in the wrong and asked her to write a confession.

She responded by running away.

Weeks later, police found her hundreds of miles away from home. "I refused to come back to my hometown with them," she says. "But they overpowered me, threw me into a car, and kept me hostage in a motel. I went on a hunger strike. My parents finally drove me to a hospital where they injected nutrients into my body for two days."

These bureaucrats only think of their political résumés as they destroy socialism. They want students to focus on studying Marxism, not to practice it or fight for its cause.

She says Renmin University also sent officials to stay with her while she was under house arrest, and they made her sign a pledge to stop her activism before allowing her to return to school. Now that she's back, the school has placed her on a blacklist and assigned school officials to monitor her.

But the student says university officials have a lot to answer for. "These bureaucrats only think of their political résumés as they destroy socialism," she says. "They want students to focus on studying Marxism, not to practice it or fight for its cause. When we do that, it causes too many problems for them."

Marxist youths are being targeted and blacklisted by local authorities at other schools, too. Earlier this month, plainclothes police assaulted and hauled away Marxist students at Nanjing University, in eastern China, after their school refused to recognize their on-campus Marxist student society. Two weeks ago, a graduate of Peking University, in Beijing, was attacked and dragged into a car on campus by several people in black jackets. 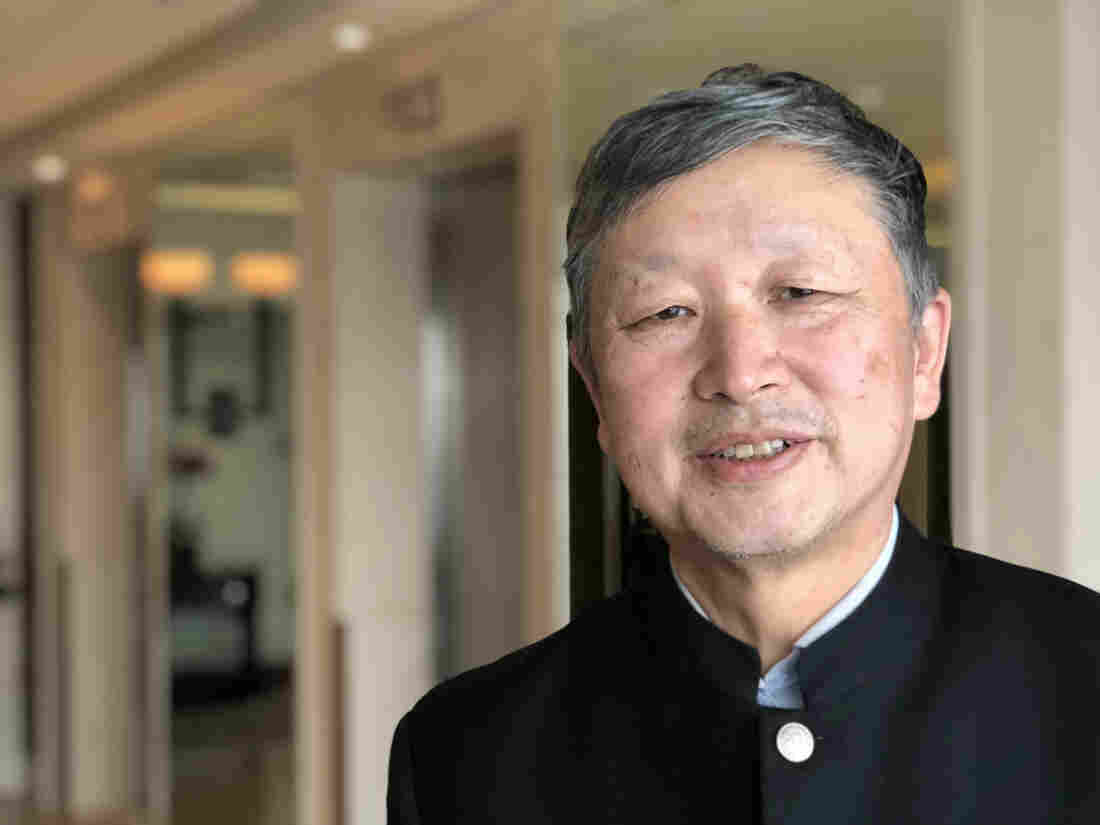 Zhang Lifan is a writer and historian of republican-era China and a former member of the Chinese Academy of Social Sciences. Zhang says China's Communist Party has brainwashed young Chinese with Marxist ideology, but by doing so, is unwittingly giving youths a tool to fight the government. Rob Schmitz/NPR hide caption 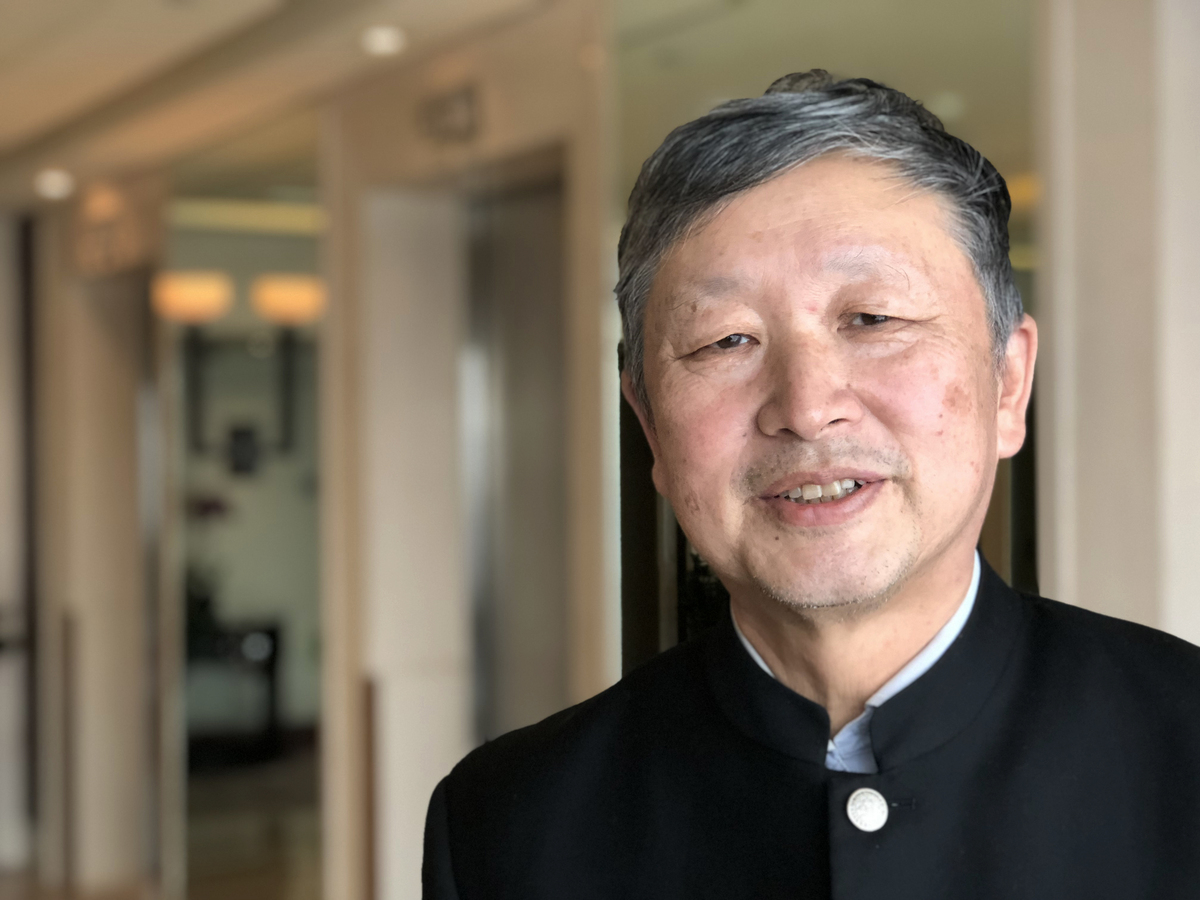 Zhang Lifan is a writer and historian of republican-era China and a former member of the Chinese Academy of Social Sciences. Zhang says China's Communist Party has brainwashed young Chinese with Marxist ideology, but by doing so, is unwittingly giving youths a tool to fight the government.

"I think this shows China's Communist Party can no longer justify itself," says Beijing-based historian Zhang Lifan. "While the party talks about serving the people, China's actually been practicing capitalism."

Zhang says young Chinese being arrested for practicing Marxism — the official ideology of the Communist Party — poses the latest conundrum for the country's leadership, whom he blames for feigning interest in Marxism in order to maintain a guiding principle.

"Since the current leader came to power, many colleges have established Marxist study centers, and that leads to a conflict for the ruling party," says Zhang. "You're brainwashing the youth with Marxist theory, but by doing so, you're giving them a tool to fight against the government."

It's also a tool young people can use to defend themselves when authorities arrest them, says Zhang. "It's like a child using his ancestor's tombstone to protect himself from an abusive parent."

The Renmin University student from the countryside says he learned this lesson over the summer, when he chose to work at a toy factory hundreds of miles from Beijing to beef up his Marxist credentials. Instead, it was a lesson on the realities of working at a Chinese factory.

"I had to sign a contract giving up my social benefits or else they wouldn't hire me," he remembers. "We worked 16 hours a day with hardly any breaks. When workers were injured, nobody helped them."

When he tried to stand up for his coworkers in a workplace dispute, a manager punched him and then refused to pay his salary, he says. When the young man would not leave until he was paid, the factory owner called Renmin University officials and complained about their student, prompting the university to send a teacher to come and retrieve him.

Now he's on a school blacklist, too. He says university officials assigned his roommate to spy on him.

The university has also cracked down on the Marxist youth group, barring its members from helping migrant workers on campus.

When asked what China's leader Xi would say about the situation at Renmin University, the male senior doesn't hesitate: "I think he'd definitely side with us. We've studied his theories, too, and if you look closely, you'll find that what the school is doing is against his ideas," he says.

After all, he says, Xi has instructed his generation of Chinese to study and implement Marxism, and the student says that is exactly what his group is doing.