Accessibility links
'Heirs Of The Founders' Looks At Efforts To Stave Off Civil War H.W. Brands brings to life a transitional era of American politics when the scope and power of the federal government was unknown, as were the boundaries of the United States. 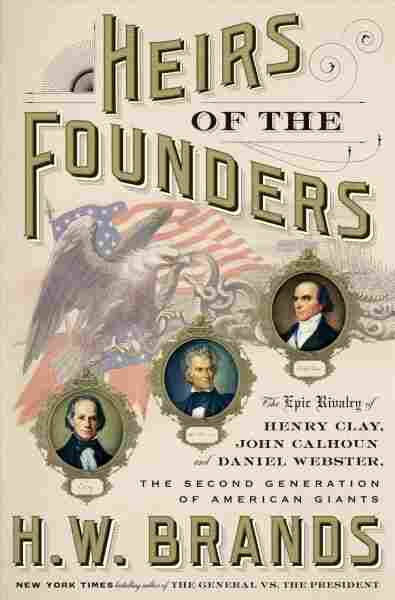 American politics has changed a lot over the past 200 years.

Sure, that's an obvious thing to say. But the seismic shifts in political rhetoric, messaging and style came crashing home during the last couple weeks, as I read about the greatest speech in the history of the U.S. Senate in H.W. Brands's new book, Heirs Of The Founders.

The speech: Daniel Webster's reply to Robert Hayne during an 1830 Senate debate.

The topic: Nominally, a push by eastern states to limit the scope and speed of land sales in the western frontier. More broadly, this was just one proxy battle in a larger fight over slavery, the power of the federal government, and Southern states' right to ignore — or nullify — federal laws they didn't like.

The context: Answering criticism from Hayne, Webster delivered an extended — we're talking days here — critique of nullification and defense of the Union. "It is, sir, the people's Constitution, the people's government, made for the people, made by the people, and answerable to the people," he said, using words some other orator would paraphrase more famously three decades later. He argued John C. Calhoun and the other South Carolinians were wrong to claim the federal government was infringing on their liberty. "Liberty and Union, now and forever, one and inseparable."

As I read about Webster's speech, my wife sat on the couch next to me watching a live Instagram feed of incoming New York Rep. Alexandria Ocasio-Cortez. The star of the newly elected House Democrats was chopping onions and carrots to make soup. As she did this, she answered questions about immigration rights and the importance of labor laws, among other things.

Is this a devolution? Maybe. On the other hand, more than 3,500 people were watching, and Ocasio-Cortez was getting them to care about — or at least think about — her policy priorities.

Informal has replaced formal. Mass communication has replaced floor speeches. And today success means authenticity, not verbosity. In fact, politicians are often punished for being well-scripted. So yes, politics looks much different.

But even today, Henry Clay, John C. Calhoun and Daniel Webster's spirits are alive in Congress. Brands's book is titled Heirs Of The Founders, but for the legislative branch, these three men are arguably more important than the founding fathers. Their countless portraits loom over the House and Senate, looking down on contemporary lawmakers like the headmasters of Hogwarts.

Brands's book is a joint biography of three giants of Congress known in their day as "The Great Triumvirate." All of them failed repeatedly to be elected president, but all three shaped the country as it transitioned beyond the first generation of leaders who set up the American system of government, and then gradually teetered toward Civil War.

Three subjects can be a lot, especially for a writer like Brands who gravitates toward Da Vinci Code-length chapters of just a few pages at a time. Large chunks of the lives and careers of Clay, Calhoun and Webster are missing here. Brands mentions that Clay was elected House Speaker in his very first term in Congress. How? Why? I'd love to hear more about it — especially in the middle of an extended battle over who will serve as the next House Speaker in 2019 — but Brands never fills in the details. The book also leans heavily on excerpts from floor speeches and journal entries. Perhaps Brands would have been better off writing about Henry Clay, the subject who comes most alive in these pages, and simply made Calhoun and Webster major recurring characters.

The book still brings to life a transitional era of American politics when the scope and power of the federal government was unknown, as were the boundaries of the United States. It also details the, at times, delayed and meandering, but ultimately inevitable, march toward catastrophe that a half-slave and half-free country found itself in.

The bulk of the book focuses on three different compromises that Henry Clay pulled together to delay the Civil War. In his "Missouri Compromise" and later "Compromise of 1850," Clay tried to split the difference as the country expanded, allowing some states to enter as free states, and others to come in allowing slavery. Clay also worked to diffuse the Nullification Crisis at a point when President Andrew Jackson was ready to march federal troops into South Carolina to block the state from overturning a federal tariff. He proposed a gradual phasing out of the tariff — "Compromise Tariff of 1833" — arguably a capitulation to a state Jackson and Webster thought was ready to embrace treason.

A revisionist look at Clay argues that these compromises were a bad thing, and that the United States would have been better off fighting the Civil War and ending slavery much earlier. "We are talking about a compromise based on forfeiting the lives of the enslaved," Ta Nehisi Coates argued in 2011. While the federal government benefitted from delaying the inevitable conflict between North and South, the millions of slaves who lived and died in the interim did not.

Brands clearly admires all three members of the Triumvirate — even Calhoun, who morphed over time into a zealot who credulously argued that slavery was good for slaves. But while compromise has its time and place — and is usually the most effective form of productively governing — it can also be morally corrosive.

The closing chapters of the book demonstrate this. As the shadow of a Civil War grew larger and larger, Clay and Webster got more and more desperate to stop it. (By this point, Calhoun was essentially cheering on secession and slavery.)

Clay's final compromise — the Compromise of 1850 — gave slave states almost everything they wanted. Webster, a longtime abolitionist, delivered a much less-celebrated Senate speech endorsing the approach. He backed the expansion of slavery into new states, chastised Northern states for not helping return fugitive slaves to the South, and dismissed abolitionists as extremists who hurt their own cause.

The man who had once advocated for liberty and union was now sacrificing one for the other. The compromise bought the United States exactly 10 years.