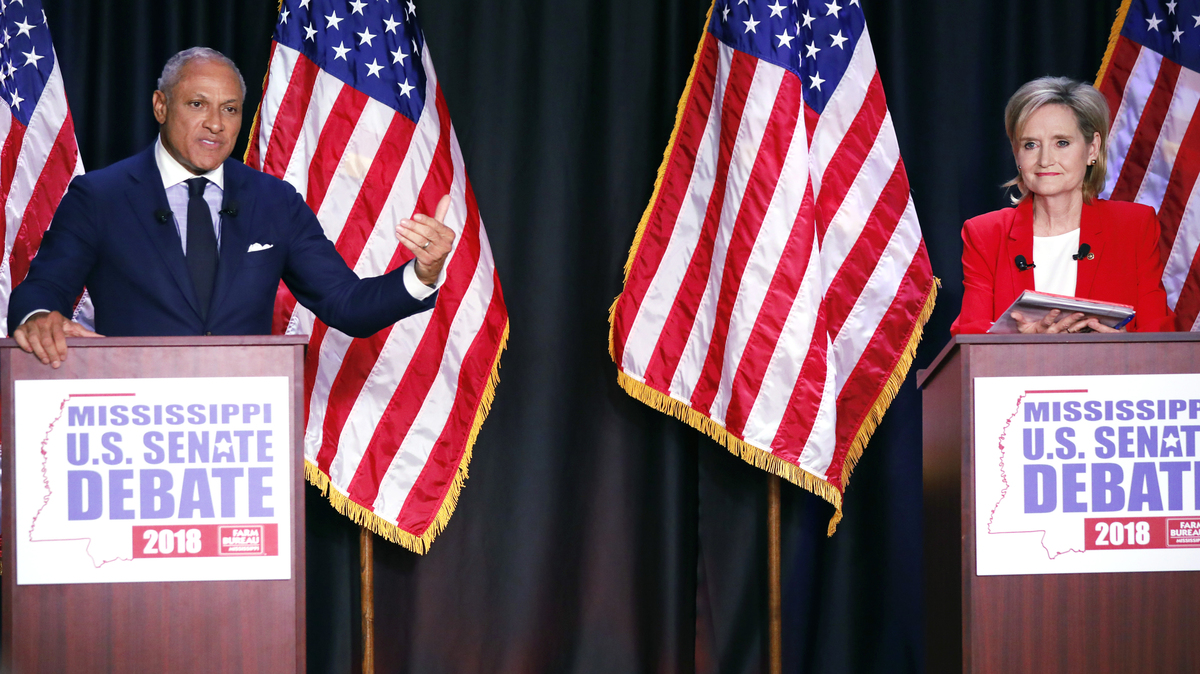 Mississippi was set for a fairly mundane midterm election runoff next week — deciding who would win the final undecided U.S. Senate seat in a state that easily elects Republicans, until a senator greeted a cattle rancher.

In a video posted on Twitter last week, Republican Sen. Cindy Hyde-Smith is talking to a rancher named Colin Hutchinson, who is seen putting his arm around her at an event in Tupelo, Miss., earlier this month.

"If he invited me to a public hanging, I'd be on the front row"- Sen. Cindy Hyde-Smith says in Tupelo, MS after Colin Hutchinson, cattle rancher, praises her.

Hyde-Smith is in a runoff on Nov 27th against Mike Espy. pic.twitter.com/0a9jOEjokr

The comment that comes next is hard to understand, but the dispute isn't about what Hyde-Smith said – it's about what her words meant.

"If he invited me to a public hanging," Hyde-Smith said to the supporter, "I'd be on the front row."

The crowd laughs. But many people took the comment to be a reference to lynchings.

That video prompted an onslaught of criticism (Walmart Stores Inc. pulled its support for her campaign and asked for her to return a $1,000 donation on Tuesday) and raised a question for Democrats — could they flip another Senate seat in the Deep South, like they did in Alabama last year?

That victory came in large part because of engagement by African-American voters. Hyde-Smith's Democratic opponent, Mike Espy, is a former congressman and U.S. agriculture secretary and is black. As of the most recent census, Mississippi had the highest percentage of black residents, 37 percent, of all states.

"The act of lynching is not a joking matter," Wiggins said.

Hyde-Smith has dismissed the criticism. In a statement, she said her joke about her willingness to attend a public hanging with the supporter was meant as an "exaggerated expression of regard" and "any attempt to turn this into a negative connotation is ridiculous."

In the only debate, on Tuesday night, when pressed, Hyde-Smith did apologize to "anyone that was offended by my comments," emphasizing that "there was no ill will, no intent whatsoever in my statements" and saying, "I've never been hurtful to anyone."

But she also put the blame on Espy's campaign for trying to assign any sinister meaning.

"My comments were taken and twisted and used as a political weapon against me by my opponent," Hyde-Smith said.

"I don't know what's in your heart, but I know what came out of your mouth," Espy responded. He said the comments have "given our state another black eye we don't need," echoing a TV ad he had put out just hours before the debate. It closes by saying, "We can't afford a senator who embarrasses us and reinforces the stereotypes we've worked so hard to overcome."

"We have a senator here talking about public hangings and voter suppression," Espy said in his closing statement at the debate, referencing another controversial comment Hyde-Smith was caught making: "I am not going back to yesteryear." Her campaign said those comments were a joke that was taken out of context.

Just hours before the debate, photos from 2014 also surfaced on Facebook of Hyde-Smith touring the home of Confederate President Jefferson Davis, with a caption that said, "Mississippi history at its best!"

The NAACP says that from the late 1800s to the late 1960s, Mississippi had more lynchings than any other state – many by hanging. Most of the victims were black. In that context, Wiggins says, such remarks are unacceptable.

"Those words were just inappropriate; they were wrong, they were distasteful," he said.

Hyde-Smith also received a $2,700 donation from a businessman named Peter Zieve said to be associated with white supremacist views.

The focus of Hyde-Smith's response has been Espy's past lobbying work for Laurent Gbagbo, the former president of the Ivory Coast who is on trial for crimes against humanity. His campaign has said Espy ended the arrangement because of Gbagbo's infamous record.

With the renewed attention to the runoff election on Nov. 27, both parties are sending national figures to Mississippi. Democratic Sens. Cory Booker and Kamala Harris have stumped for Espy. President Trump will campaign for Hyde-Smith next Monday, the day before the runoff — something Hyde-Smith reiterated in both her opening and closing statements at the debate.

Democrats are hoping the attention around the controversy will help turn out the party's base and turn off enough Republican voters.

Jack Pitts, 28, of Jackson, said he supported Hyde-Smith in the first round of the special election, but he's uncertain about the runoff. He described Hyde-Smith's response to the controversy as "tone-deaf" and "dumbfounding."

"I will go to the poll," Pitts said. "I don't know if I can in good conscience vote for either of these candidates now."

Hal Marx, the Republican mayor of Petal, Miss., and a candidate for governor next year, called her remarks about a public hanging "silly" and "stupid."

But Marx doesn't think Hyde-Smith's remarks were racially motivated, and he'll support her next week.

"She didn't use the word 'lynching,' which has a particular connotation; she said 'public hanging,' and there were a lot of people of all races that were hanged in those days publicly," he said.

For veterans of Mississippi's civil cights movement, the dark connotations of public hanging are harder to miss. Flonzie Brown-Wright, 76, is a longtime voting rights activist in Jackson. She's angry that Hyde-Smith has continued to stand by her statement rather than apologize.

"Now what the hell is that?" Brown-Wright said. "You don't have the compassion nor the capacity nor the intelligence to make a decent statement? Or to say, 'I may have misspoken?' It would have been all over."

Brown-Wright said that in the 1950s, her two teenage cousins were killed by a group of white men, dragged to death in a racially motivated crime.

"I've lived it and I've lived through it, and so Miss Hyde-Smith needs to understand why people are sensitive about the words 'hanging' and 'lynching,' " Brown-Wright said.

In an earlier version of this story, Peter Zieve's name was misspelled as Peter Sieve.