Accessibility links
'Extinctions' Digs Up Buried Memories and Unacknowledged History The title Josephine Wilson's new novel refers to its protagonist, an elderly man who feels useless, extinct — and whose journey is to find the means for growth and change within himself. 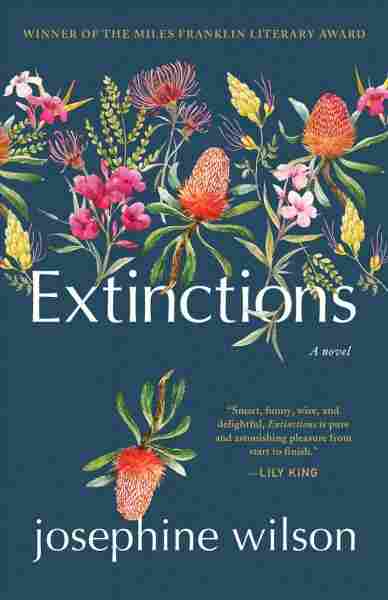 Extinctions, by Australian writer Josephine Wilson, opens with a photograph of a man standing beside a large fossil from an 1879 book, Extinct Wingless Birds of New Zealand.

The past is invoked — a prior Eden where wildness reigned and the dark earth was rich and generous, the air thick with beating feathers.

"Tales of extinction often begin near the end," Wilson writes.

Some stories are exemplary, propitious, like Martha, the last passenger pigeon, whose centenary is marked in 2014 by the Cincinnati zoo, where the bird died ...

In the end, all is allegory.

Extinctions received Australia's prestigious Miles Franklin Literary award in 2017. In its physical appearance, the novel presents like a work by W. G. Sebald — black and white photographs interspersed throughout — mostly related to engineering feats and failures, pictures that imply readers should stop and think about what makes them pertinent.

All may be allegory, but Extinctions gets its hands dirty with a real plot and realistic characters. Engineering professor Frederick Lothian is languishing in an Australian retirement village, miserable and waiting to die. He mourns his American wife, Martha (who shares a name with that last carrier pigeon), his lost son Callum, and his estranged daughter Caroline. A stickler for accuracy, Fred has been a difficult father, having fallen into the parental trap of letting his wife provide the emotional support for the family while he served as educator and disciplinarian. In the wake of Martha's death, he is lost.

Fred hides from everyone, including himself. Despite feeling ancient, he has not yet reached 70 — and there is more to his life than can be seen in his small apartment, littered with boxes he's never unpacked and mementos of his dead wife.

In its setting in a retirement community, Extinctions resonates with the pseudonymous Hendrik Groen's The Secret Diary of Hendrik Groen: 83 ¼ Years Old (translated from the Dutch by Hester Velmans). Groen's charming, best-selling novel is a series of diary entries by a lovable, foibled pensioner with a wonderful sense of humor. Both protagonists evince a sheepish curiosity about their neighbors, they look out their windows and make observations about their fellow retirees. Hendrik Groen's curiosity, however, leads more directly to human engagement — he has a best friend and takes an active interest in the governance of his facility. The Dutchman is both affectionate and self-deprecating; he sells us on the intrigues of life in an old-age home.

Extinctions, by contrast, centers on the depression that stems from buried memory and unacknowledged personal history. The complex family relationships in Extinctions take an entire volume to uncover — Fred has his idealistic or euphemistic ways of remembering people, like "a prior Eden," but his past is messy. He grew up halfway around the world in England, raised by an abusive, drunken father and a mother who abandoned her sons when she could no longer take it.

Initially, Fred idolizes his deceased wife and their relationship without looking underneath it. But as his air-brushed past starts flaking away, he opens a path to self-criticism and personal evolution. He becomes increasingly lovable and loving as he re-examines his relationships with his wife, his children, his contemporaries, and himself. Finally, he interrogates his own fathering skills, a project that goes to the heart of his grief-soaked inertia.

Extinctions takes a hard look at the politics of adoption, cultural appropriation, loss, deracination, and professional frustration, without Wilson letting up her fictional grip. She introduces us to Jan Venturi, who befriends Fred, and whose last name is a nod to Fred's regrets about becoming an engineer, rather than an architect. "Love is a feeling," Jan tells him. You "have to do it over and over and over again, and then you have to accept that you'll never be perfect." Engineering leaves no room for error, but life does. Whereas Hendrik Groen presents with an accessible and endearing humanity — faults and all — Fred needs Jan to re-connect to his.

What does the title of this novel mean? Surely it refers to Fred, who sees himself as useless and extinct at the beginning of the book. If he's on the way out, why should he try? His journey is to find it within himself to grow and to change.

We live in an age of Extinctions — not only the plants and animals that give our planet its rich and life-sustaining bio-diversity, but the potential extinction of democracy, of humanity, and life as we know it on the planet. Josephine Wilson knows this. She writes with great intention, calling upon us as individuals and as a society to change.