Accessibility links
'You Better Own This': How Rami Malek Came To Embody Freddie Mercury Malek sang at the top of his lungs while playing Queen's iconic lead singer in the new biopic Bohemian Rhapsody. Still, he says, "No one can sing like Freddie Mercury." 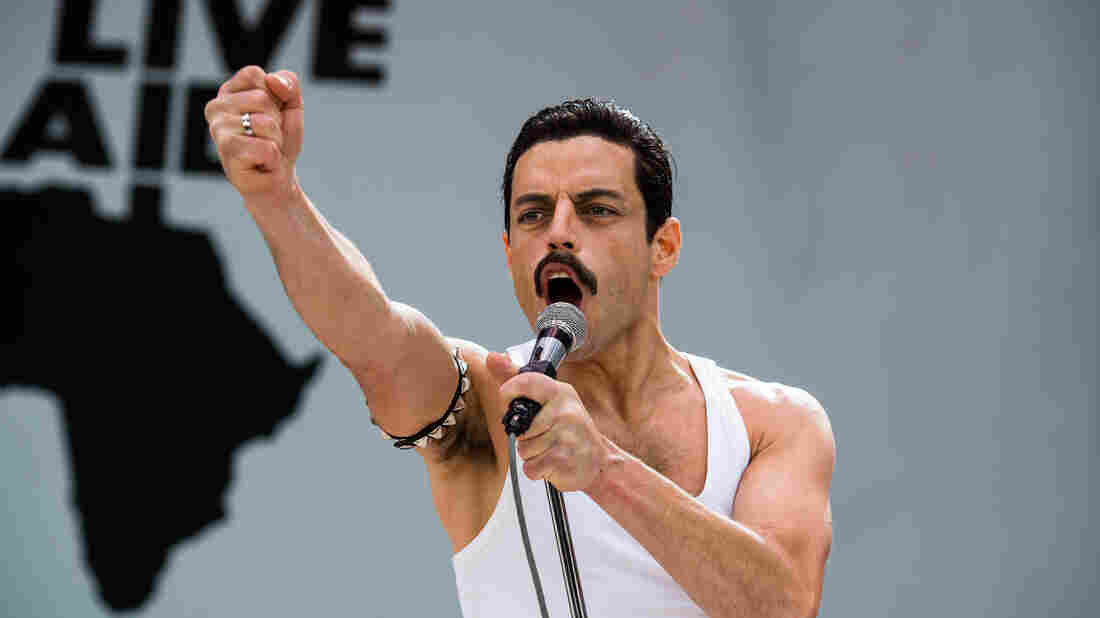 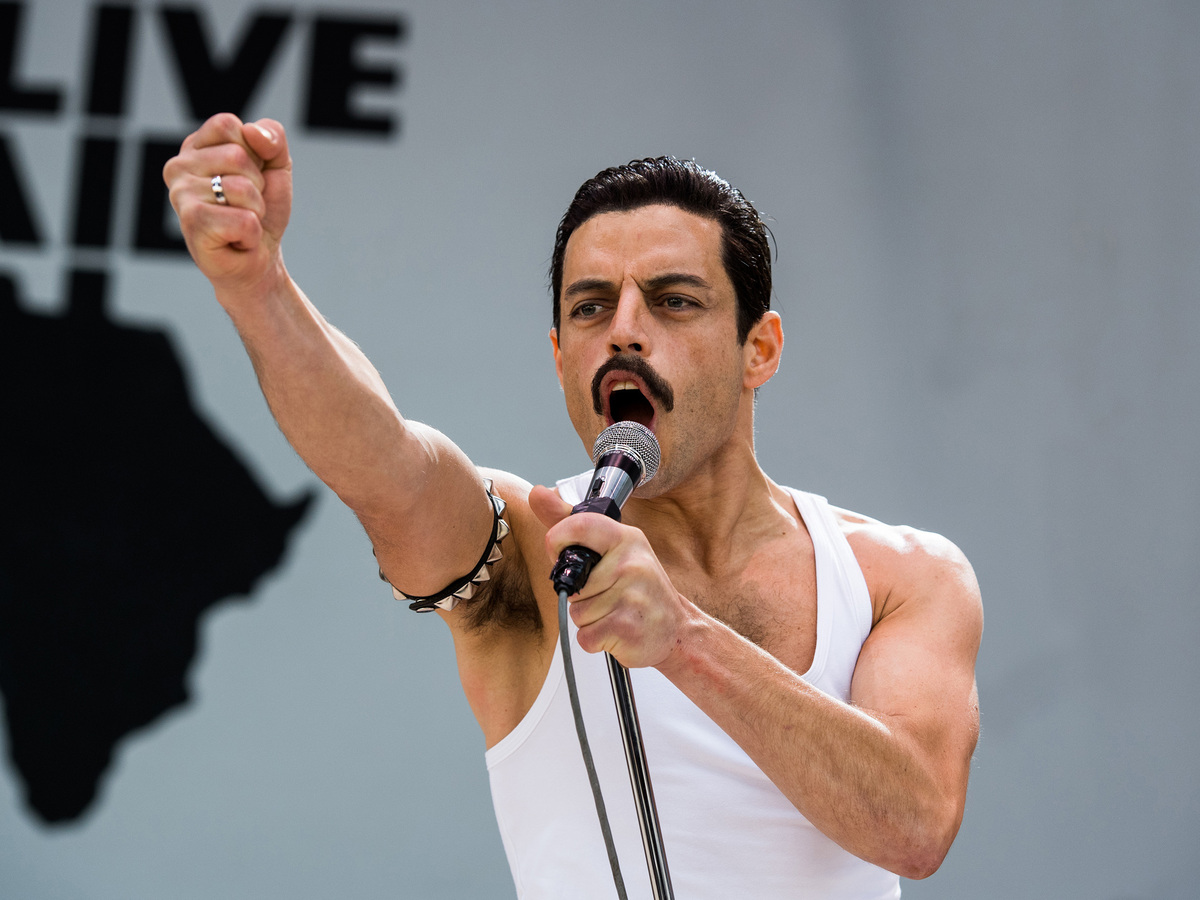 There is a moment in Bohemian Rhapsody, the new biopic on the late Queen lead singer Freddie Mercury, when Rami Malek, playing Mercury, steps onto the stage in a sequin leotard that leaves little to the imagination. The outfit is pure Mercury. But Malek, who also plays a withdrawn hacker on the hit television series Mr. Robot, initially felt so uncomfortable in it that he had to talk himself into wearing it.

"I said [to myself], 'Listen, if you're going to play a man who [will] rock this thing out like nobody's business ... you better own this,'" Malek says.

Why Freddie Mercury's Voice Was So Great, As Explained By Science

Asteroid Named For Freddie Mercury Is Announced On His Birthday

Call it the power of sequins, but Malek ultimately found himself channeling Mercury's charismatic stage presence so much so that toward the end of shooting the film, he asked the costume designer to make his character another sequin leotard, this time in ruby red.

Malek speculates that the singer's showmanship sprung from a desire to find his place in the world. Born in Zanzibar as Farrokh Bulsara, Mercury had buck teeth and was called "Bucky" by most of the kids at the boarding school he attended in India. When Mercury returned to Zanzibar after boarding school, the country was in the midst of a revolution and his family had to immigrate to London. "At that point, trying to identify himself, [he] feels like a fish out of water," Malek says.

But in front of a crowd, it was a different story: "When [Mercury] gets out on the stage, he holds everyone's attention and says, 'Hey, I may have been an outcast and a misfit, and I may feel like I don't belong, but here on this stage, we belong together,'" Malek says. "It is the most beautiful thing to see realized."

Click on the audio link to hear the full Fresh Air interview with Rami Malek and read interview highlights below.

What I quickly realized was no one can sing like Freddie Mercury.

It's actually an amalgamation. The large majority is Freddie Mercury. I went out every day and sang at the top of my lungs, because that's the only way to match what he's doing. He's giving everything 110 percent, always. And in order to sync it up properly they use bits of my voice. ... It will lead in with my voice, and then pick up the majority using Freddie Mercury's voice.

What I quickly realized was no one can sing like Freddie Mercury, and nor can I. It's very difficult to get my voice up to those high notes, and at some point, my voice breaks. And it breaks pretty quickly when I'm trying to ascend what Freddie Mercury can do.

It was the first thing we shot: Live Aid. Day one. We came out and it was that massive crane shot that goes through the audience and comes right up around the piano and opens to Freddie Mercury, myself playing him, singing "Bohemian Rhapsody." ... Talk about a baptism by fire! I had never worked that hard in my life on one particular piece of filming.

Queen Guitarist Brian May On Writing Anthems And Studying Astrophysics

Queen Guitarist Brian May On Writing Anthems And Studying Astrophysics

Every day I spent hours with a movement teacher. ... I always wanted to keep it very spontaneous, but at the same time, honor this fantastic performance that he and Queen gave. ... There are things he does with that microphone that defy what the mere mortal can do. He whips around with it with violence at times, with elegance he uses it as the air guitar — sometimes, right in front of one of the greatest guitar players of all time, Brian May. So as Brian May is crushing it on guitar, here is Freddie Mercury air-guitaring, and it's still a magnificent thing to watch. It's so compelling and only he could get away with that.

The teeth were difficult to get used to in the beginning. Initially, I put them in my mouth a year prior to shooting and I immediately felt insecure. I felt like I was on my back foot, in a way. I didn't feel like myself. ...

It was a feeling of insecurity that I had to cover them up as well. I had been watching so much footage of him. You see him covering up his teeth so often that I thought, "How am I ever going to do that?" Well, as soon as those teeth went in, it was second nature. I found myself covering them up so often. My lips would dry up, so I found myself licking my lips as he did.

But another thing happened: I started to compensate physically by holding my posture better, elongating my body, sitting up very straight, and that's something you also see him do. And I don't know if that was something that affected him, or he was born with the elegance that he has, but it did give me a way into understanding a little bit more about him.

I had to demystify him somehow. The way to do that was looking at his background, and I thought to myself, "Here's a young man [who] immigrated to a country, defied all obstacles to do what he loved." That was one thing that I could understand.

Not to compare myself to him in any way, shape or form, but I am a first generation American. My family came from Egypt and sought a better life for their children in the U.S. Obviously, like so many people, they would have loved for us to be doctors and lawyers. ... It was very difficult to convince anyone that I wanted to do this, and that I could do this.

Heidi Saman and Seth Kelley produced and edited the audio of this interview. Bridget Bentz, Molly Seavy-Nesper and Sidney Madden adapted it for the Web.