Accessibility links
'Hardly Children' Is Restless And Strange — Just Like Humanity The spare, slightly creepy off-white cover of Laura Adamczyk's debut collection is perfect for the uncomfortable stories within it, works that examine family, childhood, adulthood, gender and race.

'Hardly Children' Is Restless And Strange — Just Like Humanity

'Hardly Children' Is Restless And Strange — Just Like Humanity 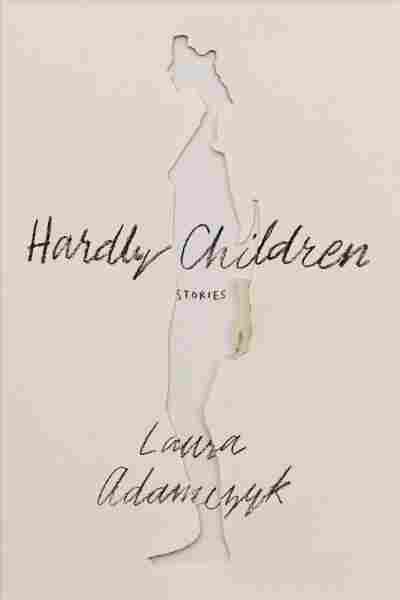 There is a disturbing blankness to the cover of Laura Adamczyk's debut fiction collection, Hardly Children. It's all a kind of papery off-white, save for a cut-out in the center of a person with small breasts, whose hand is the only thing that is vaguely, almost pink, as if it has been sitting in the morgue. The cover is perfect for the stories underneath it, which are at times eerie, often spare, and contain uncomfortable examinations of childhood, adulthood, gender, and whiteness.

The opening story, "WANTED," sets the collection's shivery tone as its narrator finds her own face on a neighborhood poster: "Have I seen this man? the poster asked. The skeletal face bones, the limp shoulder-length hair give it away. I've never looked like a woman, but most adults figure it out eventually." The unnamed narrator has been, it appears, hanging around in parks frequented by children, whom she neither likes nor dislikes, but considers "naïve adults — difficult to predict but easier to talk to."

My knee-jerk reaction, likely that of many readers, and almost certainly what Adamczyk is going for, is to ask why any childless adult would hang around kids without a sinister motive? And yet, for all the narrator's oddness, it is painfully poignant when she sits by a child on the swings and tells him it is sometimes lonely to swing alone. When she asks for a hug, I tensed up again — the power dynamics between child and adult are inescapable, after all. It's unclear, to the end, what exactly the narrator is feeling — is she turned on? Is she feeling parental? Is she, perhaps, simply so incredibly isolated that she craves the warmth of human interaction? Whatever the answer, the tone is now set, and a wonderful fog — the kind that makes your eye sting with the wet and your lungs feel damp, but that refreshes you on a cool fall morning — seems to settle over the rest of the book.

Many of the stories — "Girls," "Wine is Mostly Water," "Danny Girl," "Needless to Say," "The Summer Father," and "Black Box" — deal with families and their secrets. These stories all include sibling relationships, with an emphasis on sisters, and the uncomfortable moments of transition that accentuate the differences in knowledge between us. In "The Summer Father," for example, a middle sister can't help but notice how her older sister is changing, growing into less of a comrade and companion and more of a deliberate individual. The older girl is verging on her teens, her body becoming something to be used differently, with less abandon and more purpose. In "Wine is Mostly Water," a brother — who is part of an exhibition where hooks pierced through his skin suspend him for hours at a time from the gallery ceiling — is told by his father that he is adopted and has to choose whether to tell his sister, who was born to their parents.

The collection as a whole is restless — and this is a good thing.

The stories that escape the family unit, though, are the strangest and, to me, most wonderful. In "Gun Control," Adamczyk plays with the common Chekhovian advice, which she loosely quotes in the first sentence: "If there's a gun in act one, fire it in act three. Make it loud. Make it bang. Call it a climax." From there, she repeats the concept but slants it further and further in each paragraph, creating a long and sustained examination of our American obsession with guns, which she compares to a variety of dysfunctional relationships. It is a powerful story, and there is a wonderful sense of rage in it that fairly leaps off the page. A quieter, though equally wrenching, story is "Intermission," in which a man and a woman, friends, sit together in a community movie theater that is going out of business, each wishing that things could be different.

The collection as a whole is restless — and this is a good thing. The characters are almost always physically moving, but listlessly, commuters in their own lives. It's the kind of collection you want to read on a subway or in a moving vehicle or out in a café, as if to remind yourself that humans really are so often this way — inexplicable, urgent, slow to change, and unfathomable.