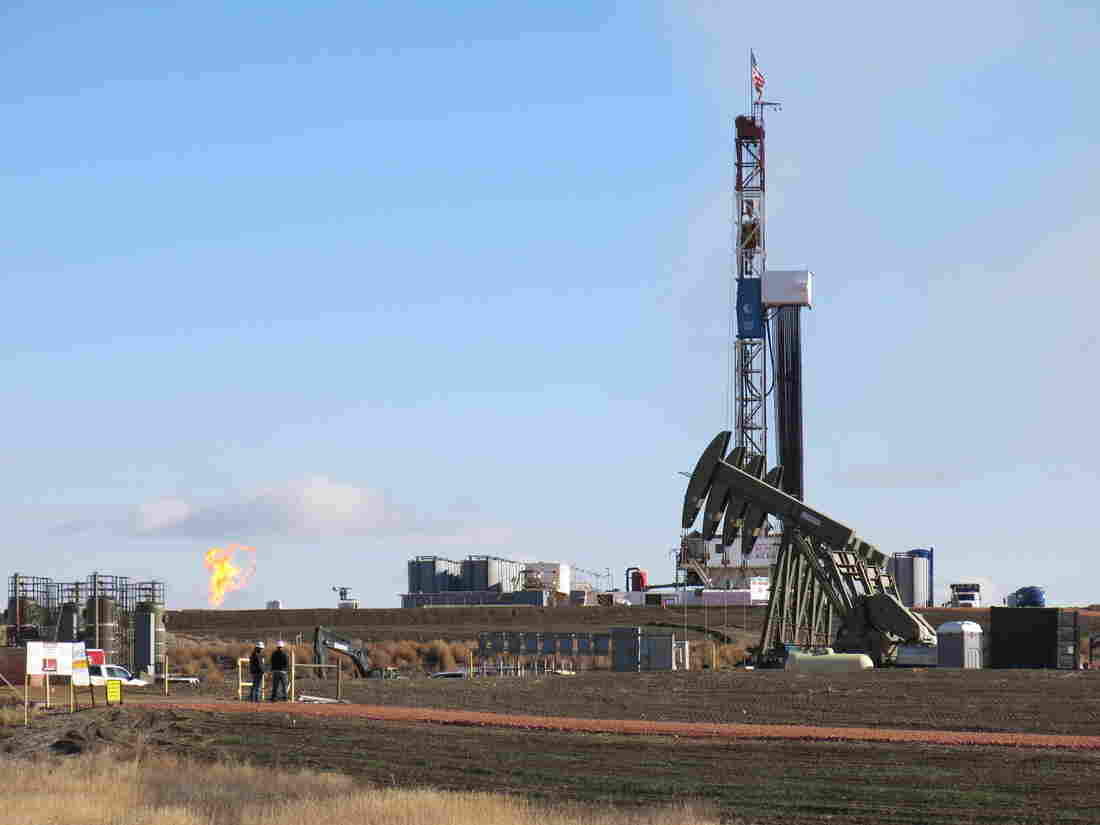 An oil well just south of Watford City, North Dakota, is one of thousands drilled in recent years. The oil-rich Bakken shale formation has made North Dakota the second-largest crude-producing state behind only Texas. Jeff Brady/NPR hide caption 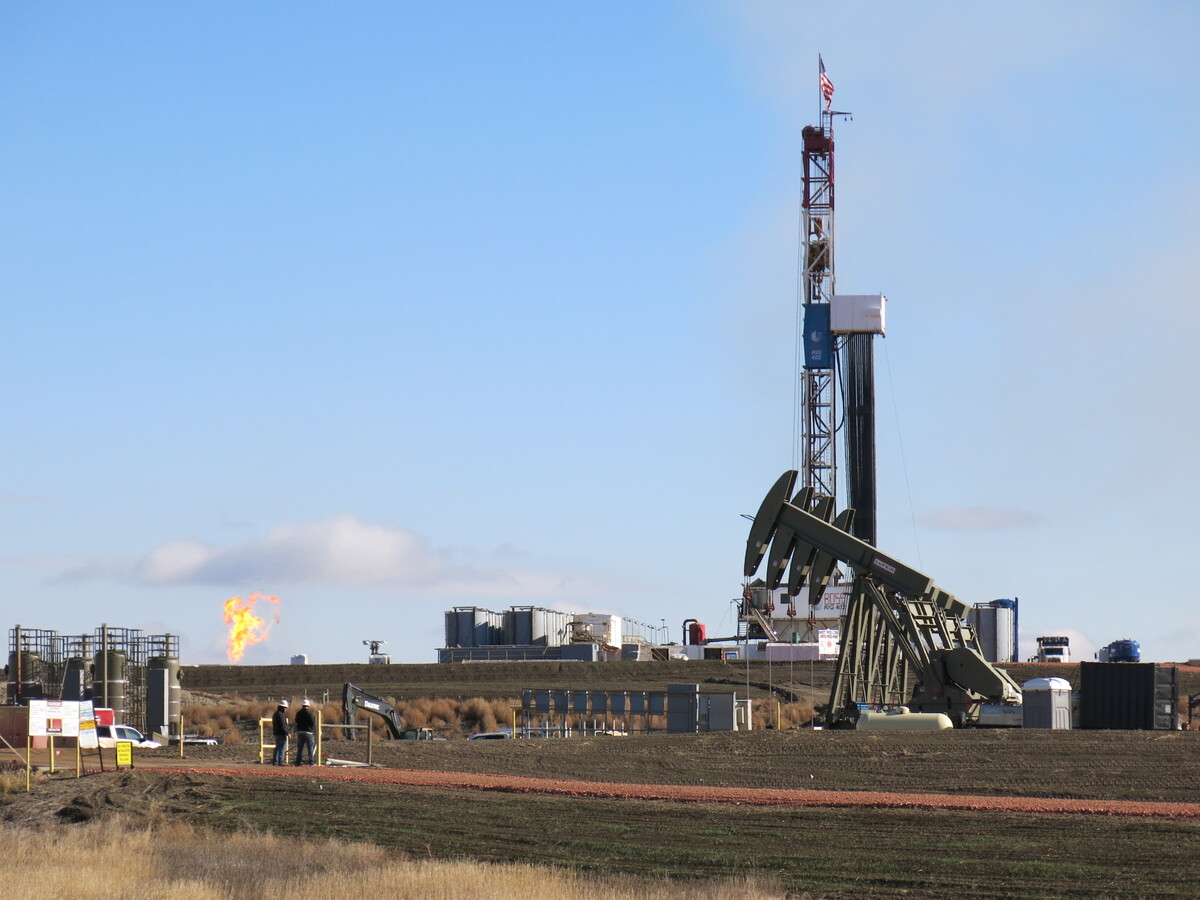 An oil well just south of Watford City, North Dakota, is one of thousands drilled in recent years. The oil-rich Bakken shale formation has made North Dakota the second-largest crude-producing state behind only Texas.

The U.S. hit a milestone this year, producing more crude oil than any other country, and North Dakota is a big reason for that. After a lull when prices collapsed in 2014, the state is setting new production records and is the country's number two oil state, behind only Texas.

Reaching this point has had its challenges. Five years ago many in these rural oil fields were talking about rising crime, including prostitution and illegal drugs. Another complaint was traffic jams from all the pick-up and tanker trucks traveling back and forth to the thousands of new wells that were drilled.

But visit Watford City now and the subject of crime doesn't really come up. The town feels less frantic. After years of growing pains, the region has spent a lot of money upgrading infrastructure to accommodate the influx of people drawn by the oil boom. A bypass around town has eased traffic on the main street.

Residents still have mixed feelings, though, about how the oil industry has changed things.

"I moved here to get away from people and they followed me," laughs Donna Rustad, a brand inspector watching ranchers unload calves at the Watford City Livestock Association. 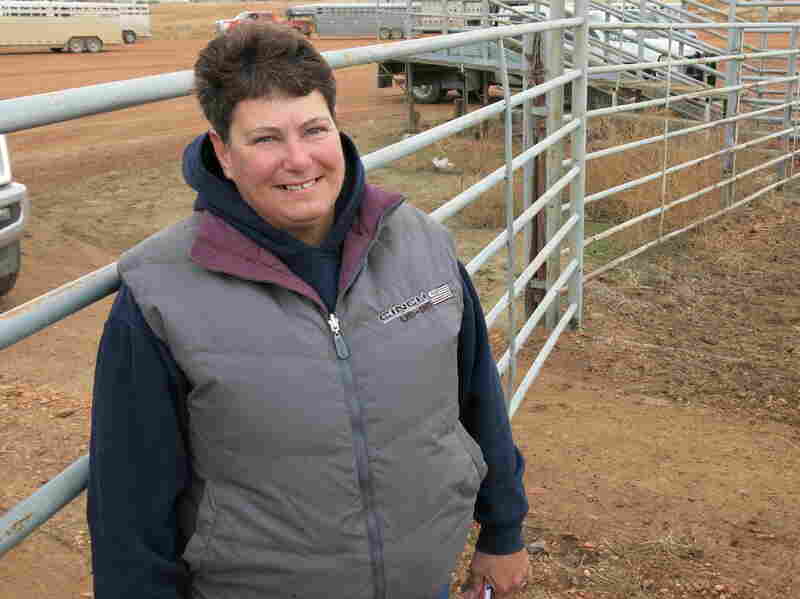 Donna Rustad moved to Watford City before the first Bakken oil boom. She has mixed feelings about how much the town has grown, but says the oil business has helped a lot of people here. Jeff Brady/NPR hide caption 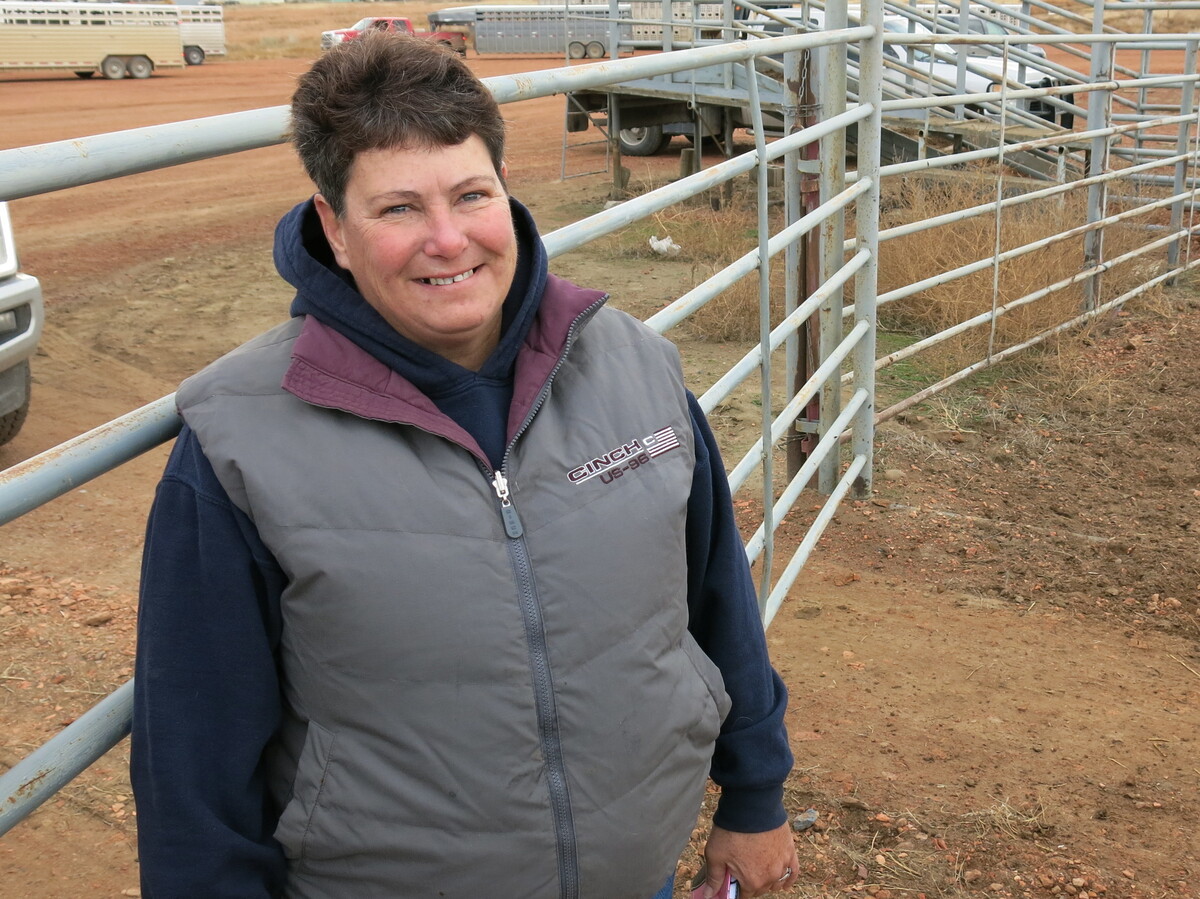 Donna Rustad moved to Watford City before the first Bakken oil boom. She has mixed feelings about how much the town has grown, but says the oil business has helped a lot of people here.

She moved here before the last boom. The town's population more than tripled in the past decade, from 1,790 to 6,523, according to the latest U.S. Census estimate. But like many of her neighbors Rustad concludes that, overall, the oil business helped Watford City at a time when many rural towns are hurting.

"Our town is booming, our main street is full. You don't go through little towns and see every store front have a business in it. We do," she says.

Before fracking and horizontal drilling revived North Dakota's oil business, Watford City mayor Phil Riely says his town was losing population and a top priority for policy-makers was to stop the out-migration.

"It was scary almost at times. We were going to close a school and we were going to have to lay off teachers," says Riely. Now he says friends he grew up with are moving back for jobs.

During the previous boom there were a lot of temporary workers coming from other states and living in RV parks, some in their cars and many in so-called man-camps. But this time is different, says Riely. Workers are bringing their families to settle down.

Instead of closing a school, a brand new $54 million dollar high school was built on the edge of town. And the oil industry has influenced what's taught there.

Down a gleaming hallway, past the lunch room that looks like a nice café, there's a truck-driving simulator that cost about $20,000. 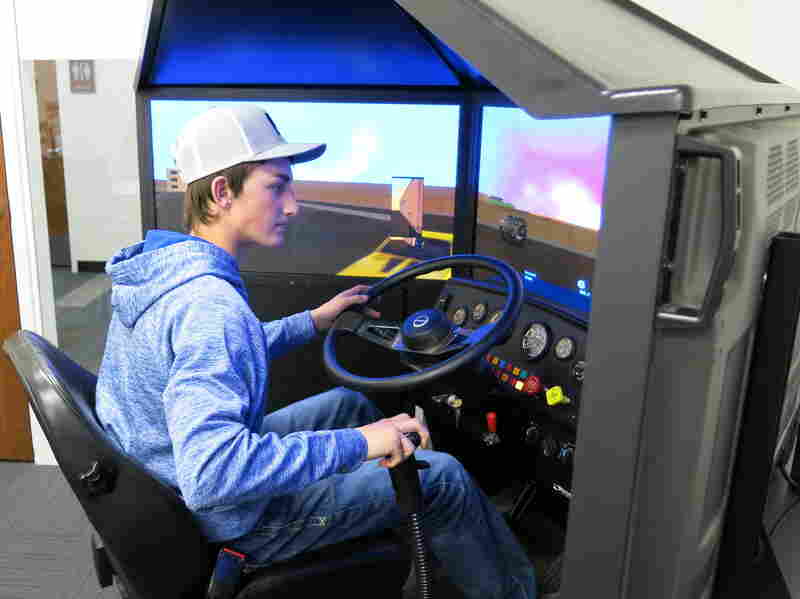 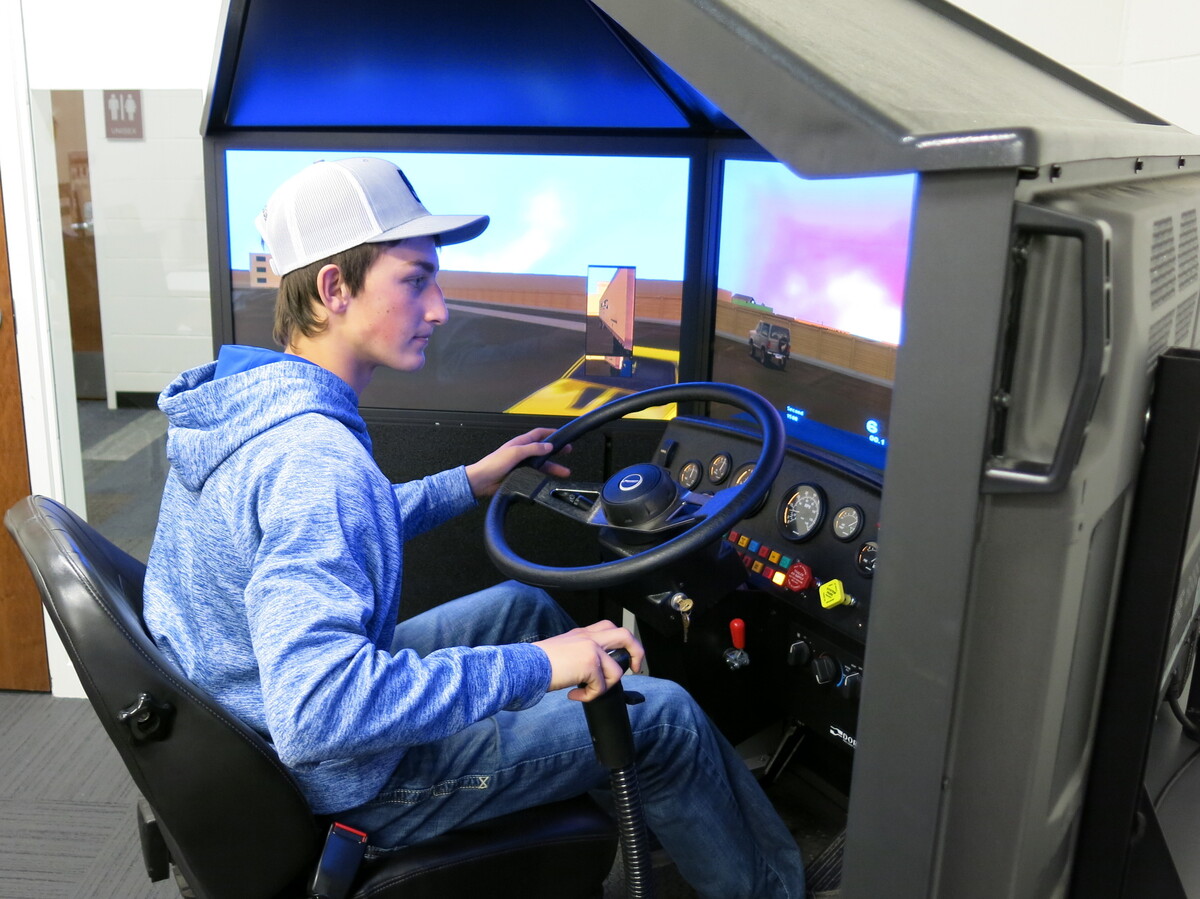 "It's basically like a video game," says Jake Lepell, a senior at Watford City High School. "You have three screens surrounding you. You're sitting in an actual truck seat [and] you've got every pedal that a truck regular would have."

The simulator takes the high school driver through different scenarios, such as parallel parking, entering a freeway and navigating narrow roads. The goal is to encourage students to pursue truck driving as career.

Another senior, Garrett Thorgramson says a representative from a local company told him pay for drivers in the oil fields is good. "Fresh out of high school you'll make about 80 grand, and if you're trucking for three more years you're making well over a hundred [thousand dollars]," he says.

North Dakota's unemployment rate in October was a low two-point-eight percent, nearly a full point below the national figure. So oil companies and others have trouble finding enough drivers.

Agriculture education teacher Scott Wisness says it's great to have people moving to Watford City from all over the country for jobs.

"But we don't want to export our students—or at least I don't—and neither do these companies. They want to keep people here who are going to stay here... Who are going to raise their families here," says Wisness.

The hope is that will keep Watford City growing.

The town has plans for more housing and businesses, and it has expanded the water and sewer systems. Local leaders are counting on the oil business continuing to expand, hopefully without the boom and bust cycles that have disrupted growth in the past.

Companies used to need oil prices to be up around $90 a barrel to make a profit drilling into the Bakken Shale formation deep underground, says North Dakota Petroleum Council President Ron Ness. But that's changed.

"Throughout the downturn starting in, really, 2015 and 2016, the industry put the engineers to work, and the technology to work, and were able to increase the efficiency of each individual Bakken well substantially," says Ness

Now he says drillers can profit when prices are down around $45 a barrel.

Today North Dakota's oil companies are producing record amounts of oil with half as many drilling rigs. Ness says the industry is pumping about 1.3 million barrels of oil every day and he predicts that will increase.

"We're really looking at potentially well over two-million barrels a day sometime over the next, maybe, four to seven years," he says.

The controversial Dakota Access Pipeline is another reason drilling here is more economical. North Dakota produces more crude oil than it can use, and in the past a lot of it left the state by train, which is more expensive than a pipeline. The Dakota Access is moving more than a half-million barrels a day more cheaply.

But its capacity is filling up quickly, and recently another big pipeline was proposed. The companies behind the Liberty Pipeline hope to have it built and operating in about two years. That would keep more oil moving, and keep these rural towns on the plains growing.