Accessibility links
Aid Group For Hostages' Families Seeks To Help Through 'Lonely Experience' Hostage US volunteers help guide relatives through government bureaucracy and personal crises after their loved ones are kidnapped or detained. 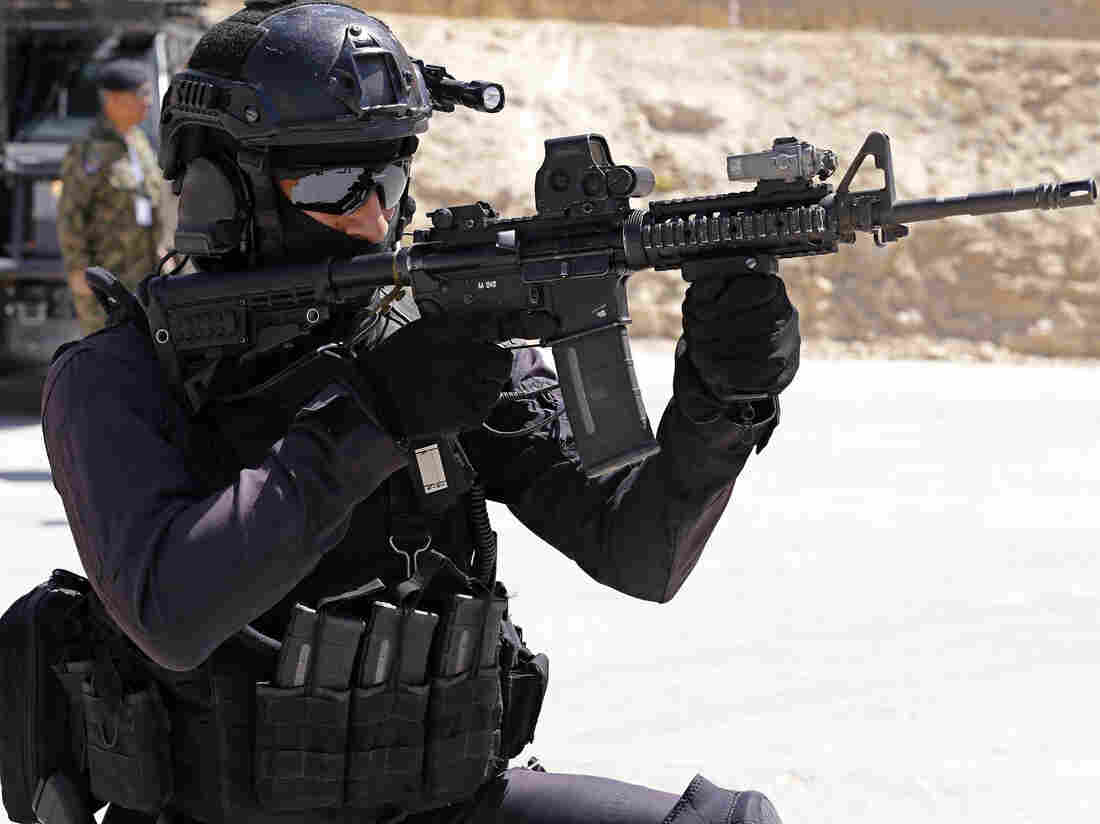 Jordanian troops took part in an international hostage rescue exercise in Amman, with other allied forces. A U.S. group focuses on helping the families of hostages before and after their recovery. Raad Adayleh/AP hide caption 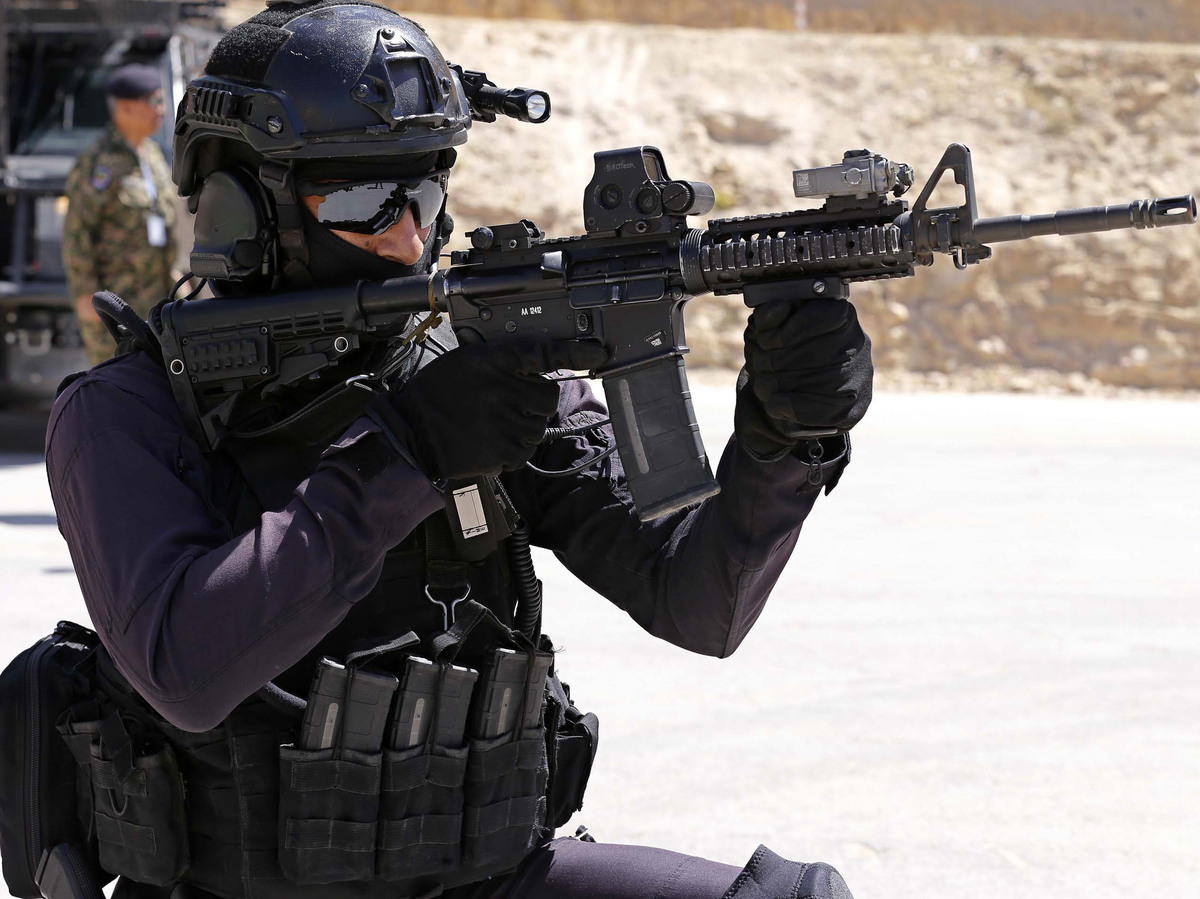 Jordanian troops took part in an international hostage rescue exercise in Amman, with other allied forces. A U.S. group focuses on helping the families of hostages before and after their recovery.

Every year, some 200 Americans are taken hostage somewhere around the world. It's usually terrifying for both the victims and their families. A nonprofit group founded by people who have lived through that experience says it wants to help.

In 1996, Rachel Briggs was enjoying her first year as a student at Cambridge University. Then came the news that a loved one had been kidnapped in Colombia.

"We faced seven and a half months of never knowing if my uncle was alive or dead," Briggs said. "We went through the roller coaster that I now know, 22 years later, is very usual for all families that go through this."

Her uncle eventually returned home safely but Briggs never forgot the fear and uncertainty. She went on to start a group to help other families, first in the United Kingdom, and then, here, in the United States, two years ago.

Hostage US helps people whose loved ones have been kidnapped by terrorists or by criminals, for ransom. The group also takes on cases of political detention — in places such as Iran, North Korea and Venezuela.

"The most important thing that we do right from day one is assign each family their own family support volunteer," Briggs said.

'It takes time for the trust to build'

Family members of past hostage victims have complained about how poorly they felt the government handled their cases. Briggs' group hopes to step in and fill the void.

At first, people sometimes aren't even able to articulate what kind of help they need.

But in time, those support volunteers can come to feel like family themselves.

Percy Pika's father, an American citizen, was taken from his farm in the Republic of Congo.

"For two and a half weeks, almost three weeks, we did not know his whereabouts," Pika said.

Later, Pika found out his father was being held in an overcrowded jail with no running water. Pika says the volunteer at Hostage US became like a brother.

"This man was there you know even taking the liberty to pray with us, to counsel us, to talk with us, to hear us when we wanted to vent," Pika said.

The volunteer accompanied the Pika family to meetings with government officials in Washington--and the group helped cover some of their expenses to travel from Nebraska.

What the government can't do

"There are things that the federal government either can't do or is not best poised to do," said Lisa Monaco, the homeland security and counter terrorism adviser during the Obama years.

"The federal government can't ask a company or a corporation to do something for free. It's simply not allowed to do that."

American reporters and aid workers were beheaded by the Islamic State. Their families were devastated and furious — they were angry over the lack of information coming from the U.S. government and they grieved over the failure to find and recover their relatives before it was too late.

"It wasn't because the federal government wasn't thinking about this issue," Monaco said. "It was organized for an old problem."

Monaco looked at the situation and saw that a nonprofit group like what became Hostage US could help fill some of those gaps for families. This year, she joined the board of the organization.

Rachel Briggs of Hostage US says a lot needed changing about the government approach, and a lot has.

Her organization is now around to connect families with advice — to secure a power of attorney, so they can access bank accounts and pay their mortgage, or to get tax advice, about how to notify the Internal Revenue Service a loved one has been captive and hasn't been able to pay their income taxes.

"Going through this is a very lonely experience," Briggs said. "You're told, 'Don't tell anybody.' Families often find themselves coping without their normal social support structure around them. And so we really hope that anybody going through this dreadful ordeal can find us as soon as possible."

For the Pika family, in Nebraska, the ordeal is mostly over. Their father returned home late last year. This holiday season, they plan to invite their Hostage US volunteer for a special meal. It's called saka saka: cassava leaves with peanut butter.