Accessibility links
Militants, Police Killed In Failed Attack On Chinese Consulate In Karachi At least seven people were killed in the attack, but none of the 21 Chinese nationals in the compound were harmed. In a separate attack in northwest Pakistan, dozens were killed in an open-air market. 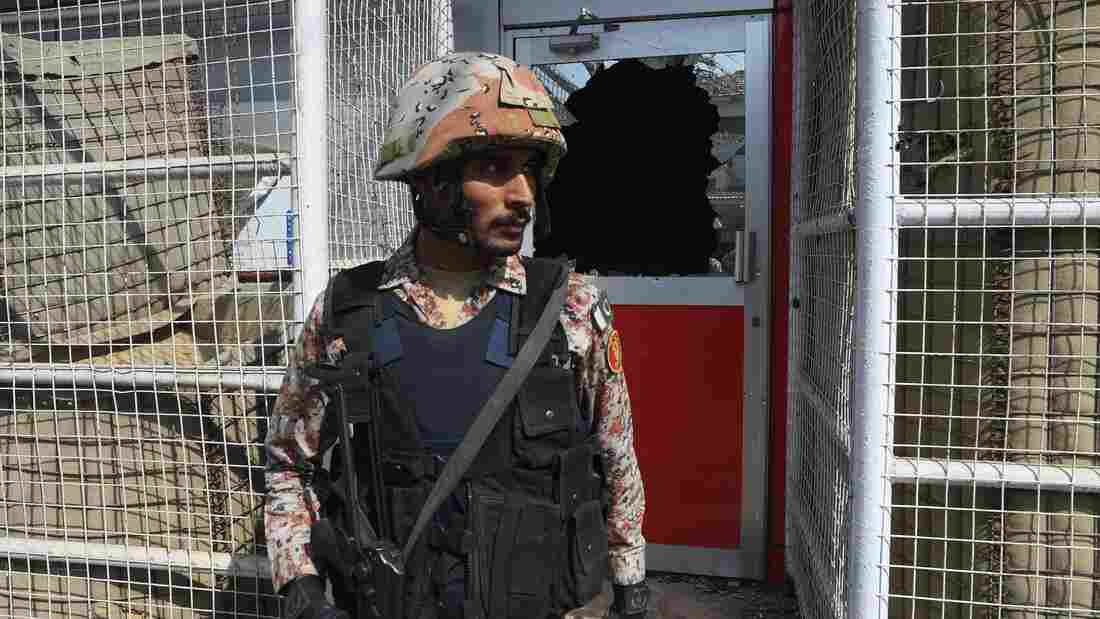 A Pakistani ranger stands in front of a damaged gate at the Chinese consulate after an attack in Karachi on Friday. Asif Hassan/AFP/Getty Images hide caption 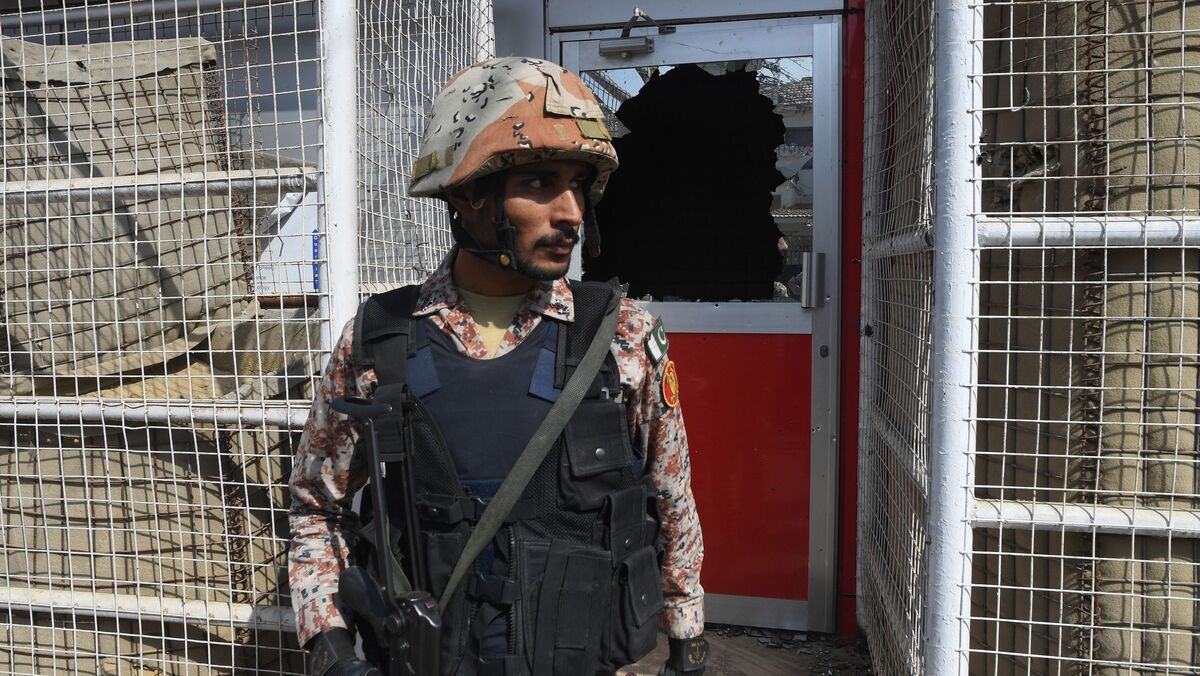 A Pakistani ranger stands in front of a damaged gate at the Chinese consulate after an attack in Karachi on Friday.

Separatist militants armed with guns and a suicide vest tried to storm the Chinese consulate in the southern Pakistani port city of Karachi on Friday, in one of the most serious attacks in years against Chinese nationals in the Islamic state. No Chinese nationals or consulate staff were harmed.

At least seven people were killed as police clashed with the militants: three militants, two policemen and a father and son, Pakistani nationals, who were apparently at the consulate to pick up visas, The Associated Press said.

But none of the 21 Chinese nationals inside the large compound in Karachi were hurt, according to the Pakistan's Foreign Minister Shah Mehmood Qureshi. He told local reporters that Chinese diplomats and staff members were taken to a secure location following the attack.

The attack on the consulate comes at a delicate time for relations between Pakistan and China. Islamabad is hoping to secure billions of dollars in loans from Beijing to shore up its precarious economy.

In an apparently unrelated attack that occurred hours after the assault on the consulate, a bomb blast targeted a Shiite community in Pakistan's remote northwest province, killing at least 31 people.

The two incidents underscore Pakistan's ongoing instability, even as much of the country is now considered safe after years of militant attacks primarily targeting its cities.

At a daily news briefing in Beijing, China's foreign ministry spokesman Geng Shuang strongly condemned the attack on the consulate but said the militants did not enter the compound.

Video from the scene showed smoke billowing from the area as the sound of explosions echoed through the upscale neighborhood.

One video posted on social media appeared to have been made by a Pakistani man who was inside the consulate for a visa application at the time of the attack. In it, he narrates the events unfolding in real time. "You might also hear the shots," he says in Urdu to the sound of a sharp blast. "We don't know what's happening outside."

The attack ended shortly after it began on Friday morning, and later video showed paramilitary forces and police rushing to cordon off the area.

Pakistan's Prime Minister Imran Khan suggested the attack was "part of conspiracy against Pak and China economic and strategic cooperation," according to a statement issued by Khan's office.

"The prime minister has ordered a complete inquiry into the incident and has desired that elements behind this incident must be unearthed," the statement said.

'My Family Has Been Broken': Pakistanis Fear For Uighur Wives Held In China

The incident represents a troubling strike against the Chinese community in Pakistan, which numbers tens of thousands of nationals. Many of them are linked to the sprawling China-Pakistan Economic Corridor, known as CPEC. It is a multi-billion dollar series of Chinese investments in Pakistan's infrastructure and energy projects.

Following the attack, the Chinese embassy in Islamabad said in a statement that it believed Pakistan was still able to secure China's interests in the country.

"The Pakistani side is able to ensure the safety of Chinese institutions and personnel in Pakistan," it said. "Any attempt to undermine the China-Pakistan relationship is doomed to fail."

A group calling itself the Balochistan Liberation Army, which has carried out several attacks in the past decade, claimed responsibility. The group said it was protesting "Chinese occupation" according to the AP.

There has long been resentment in Balochistan against Chinese investments in the province, particularly those that pertain to the development of the port of Gwadar. Resident there allege that the Chinese-led expansion of the port has stripped Baloch fishermen of their livelihoods, pushed them out of the homes and siphoned off their water supply. They also allege that Pakistani forces more harshly targeted their separatists, even peaceful activists, under the pretext of protecting Chinese assets in the area.

It was the most serious incident since August, when a suicide bomber rammed into a bus transporting Chinese workers to a mining project in Balochistan. Three people were wounded. The Balochistan Liberation Army claimed responsibility for that attack.

And in February, a Chinese national who worked for a shipping firm in Karachi was shot dead in an attack. It was unclear if the assailants in that incident were linked to militant groups.

Friday's attack came weeks after Khan, the prime minister, visited China in a bid to secure more loans to help save Pakistan's economy from unraveling. The country is currently facing a foreign currency shortage and has also sought assistance from Saudi Arabia as well as a bailout from the International Monetary Fund.

"The attack was intended to scare Chinese investors and undermine CPEC," Khan tweeted. "These terrorists will not succeed."

In Pakistan's northwest meanwhile, there was no immediate claim of responsibility for the blast that struck a crowded vegetable market in the largely Shiite town of Hangu. But targeting Shiites suggested that it was carried out by Sunni militants who have been known to frequently target the country's minority Shiite community.

The explosion killed at least 31 people and wounded dozens more, according to Khalid Iqbal, the district deputy commissioner.