Accessibility links
'Green Book' Is About Race — And Also Friendship, Class And Masculinity In the film Green Book, a black pianist on a 1962 concert tour in the Deep South hires a tough-talking bouncer from the Bronx. Rachel Martin talks to Mahershala Ali, who plays pianist Don Shirley. 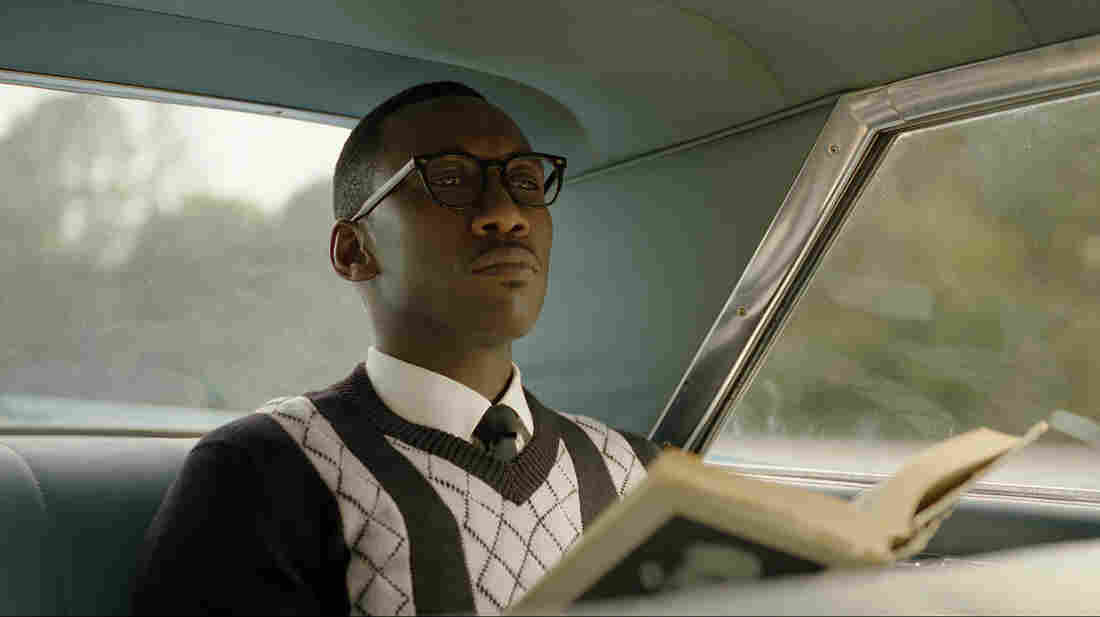 Don "Doc" Shirley could have been one of the most famous classical musicians in the world had it not been for the color of his skin.

As a black man playing piano in the 1960s, Shirley was excluded from many of the great American music venues of the day. The indignities continued when he decided to tour the Deep South in 1962. Not only did he have to play what he felt were less desirable stages and styles, but the trip also required a white driver to get him safely from club to club.

The movie Green Book tells the story of Shirley and of his friendship with Tony Vallelonga, the white man he hired as his driver during that 1962 tour. In an interview with NPR, Mahershala Ali, who plays Shirley, describes why the musician felt compelled to go south.

"It would have been too easy for him to stay up north or go to Europe and tour and travel and make money," Ali tells Morning Edition co-host Rachel Martin. "I think he was seeking to penetrate the stereotypes, especially once you cross that Mason-Dixon line. Doc Shirley wanted to expose himself to that environment for the good of changing minds and hearts."

On the tour, Shirley and Vallelonga used The Negro Motorist Green Book, a directory of businesses across the country that welcomed black travelers at a time when many places didn't.

A classical pianist and composer, Shirley grew up with dreams of playing on the world's most prestigious concert stages. He began collecting musical achievements early, learning piano at the age of 2 and performing his professional debut with Tchaikovsky's Piano Concerto No. 1 in B-flat minor at the Boston Pops at 18.

But Shirley's dreams of playing classical piano were deferred when a mentor advised that as a black man, he wouldn't be welcomed on concert stages around the world. He diverted from his classical aspirations to playing jazz, performing genre-bending compositions that also blended Negro spirituals and hints of classical music.

On why Shirley hired Vallelonga, who was openly racist, to drive him

I don't know if he would have even thought he could find someone else that would be that different. If you think about a white man agreeing to work for a black man in 1962 and drive him around in the South, it would have been challenging to find someone who could check all the boxes. I think that he approached it — and I'm guessing a bit — but I believe he would have approached it from the standpoint of believing that he would be able to be in control of the space in the car because he is the boss. He tolerates it because for him to complete this tour he needs his presence, but Tony needs Doc as well.

On the film's themes of masculinity and identity

It is a lot about masculinity and identity – and also giving people space to define that for themselves. As we're born, we're constantly having this negotiation between who we feel we are or what we feel we are with what the world is saying and guiding us to be, so that we all fit nicely into our categories. It's so much more complicated than that. I haven't seen Don Shirley's archetype before, and that was something that was really attractive to me because he was multidimensional.

Looking from my father to my grandfather, grandmother, my family — you inherit a little bit of the struggle. It means that even post-Oscar I have to advocate for myself. ... It doesn't mean that "Here is this trophy and then here's a leading role.' The conditions still are what they are, but you might have to say, "Hey, that second lead that you've handed me this script for? That's a cool part but I've done so much of that in my life. This leading part? I really want to play that part. That's the part I want to play."

I'm proud, and I feel fortunate to be in that place where I am in a position to speak up on certain things and perhaps change things, not only for myself but for a whole community of people at times. And any and all of us in those type of positions, when we have that kind of platform, have to be very conscious of having that responsibility and do our best to do good and be responsible with it.