Accessibility links
Why Are So Many Election Ballots Confusing? Poor ballot design can confuse voters and slow down election results. What makes a well-designed ballot and why are they so hard to come by? 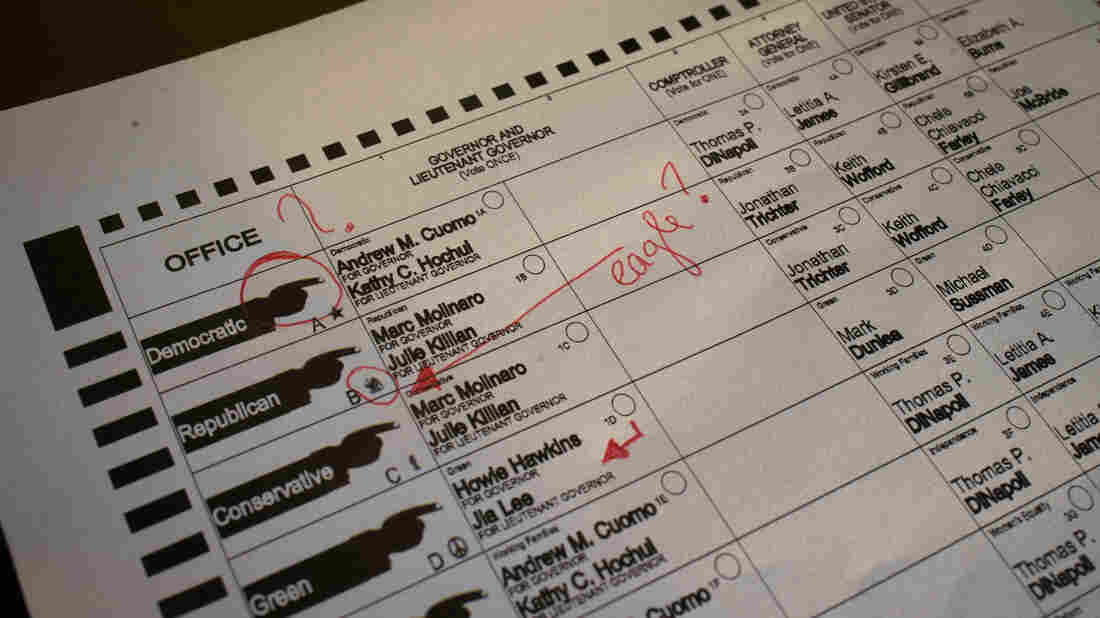 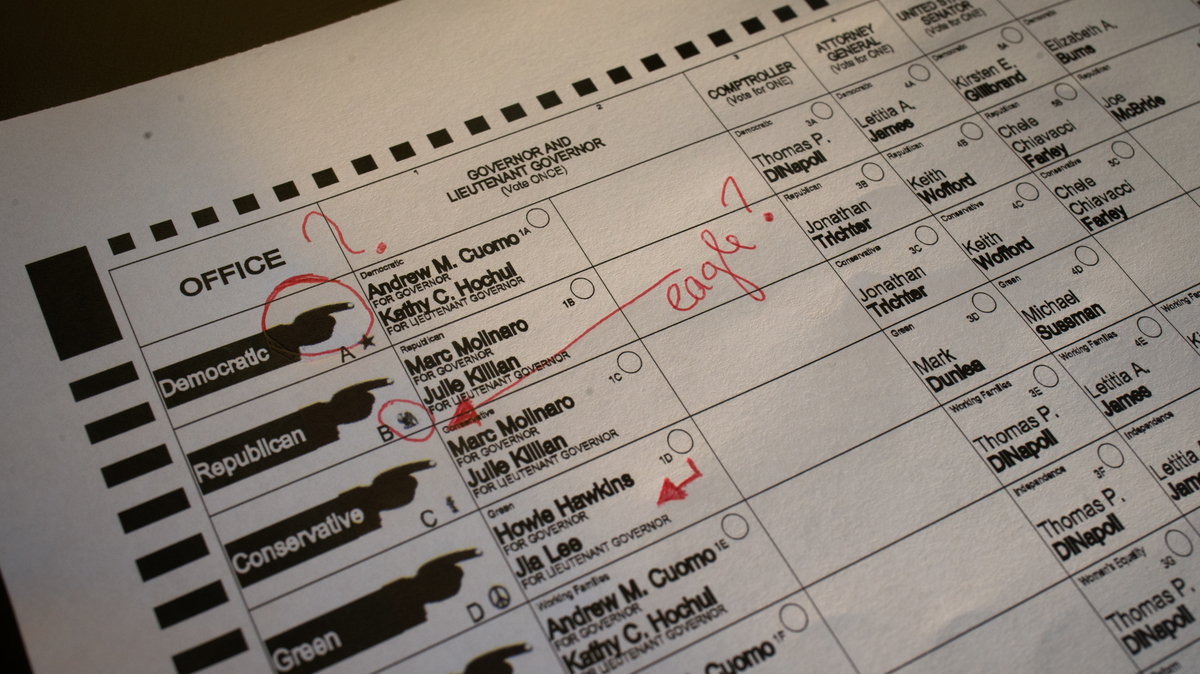 On a marked-up 2018 sample ballot from Chenango County, N.Y., illustrated index fingers point toward each candidate and tiny unfamiliar emblems represent each party — an eagle for Republicans, for example. One design expert calls these elements seriously antiquated.

Quesenbery has been assessing ballot design for nearly two decades. Los Angeles County's is one of the best she has seen.

"Look at those instructions," she says, admiring the ballot's simple wording and standout color. "They're beautiful."

A co-founder of the Center for Civic Design, Quesenbery regularly advises election boards on best practices for their ballots. Some places, like Los Angeles, have incorporated the design principles espoused by the center. But, Quesenbery says, many other counties are stuck using ballots that look as if they came out of the last century. 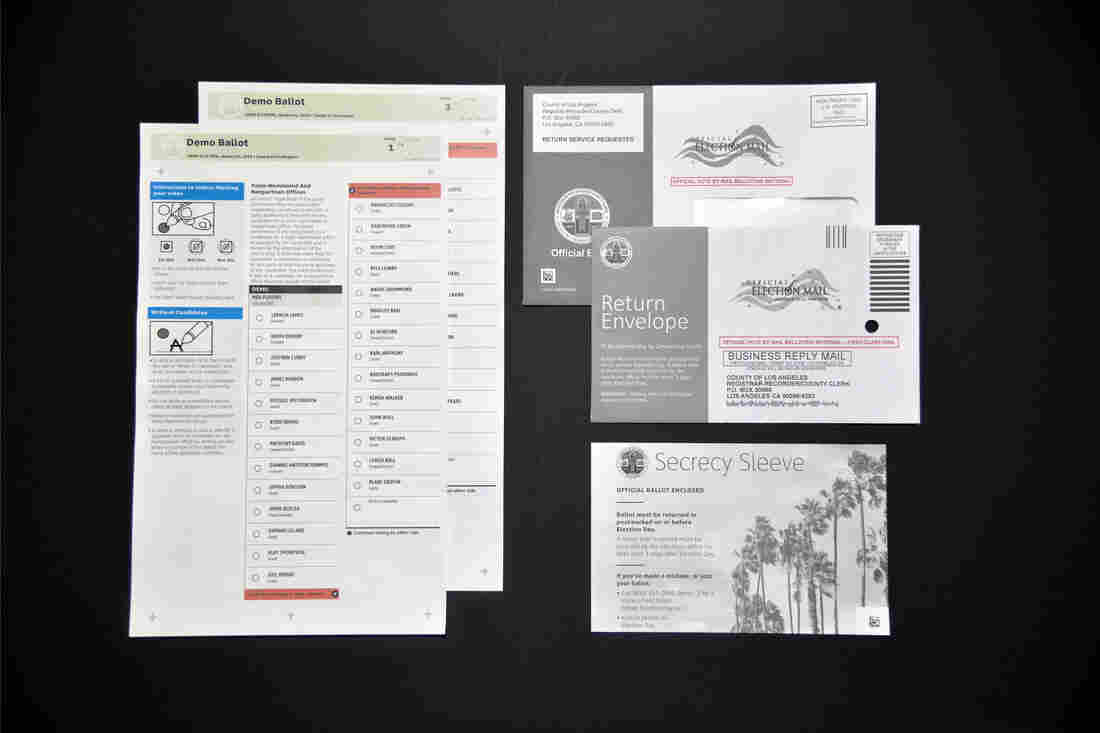 New York's election boards are similarly constrained by old technology and even older election code. The state's rules on ballot design are some of the most stringent in the country.

Quesenbery examines a ballot from Chenango County, N.Y., which has a typical layout for the state.

There are illustrated index fingers pointing toward each candidate. Beneath the fingers are tiny emblems representing each party — a star for Democrats, an eagle for Republicans, a peace sign for the Green Party. And, at the bottom of the page sit the instructions, directing voters to "mark only with a writing instrument provided by the Board of Elections."

Quesenbery says these elements are antiquated. She calls the instructions verbose, the emblems meaningless, and the finger reminiscent of "a typographic convention from the '40s."

These designs do more than irk usability experts. They can cause voters to make real mistakes. The Brennan Center for Justice, a public policy institute, estimates tens of thousands – and in some cases hundreds of thousands – of votes are lost or miscast in election years due to poor ballot design.

Tina Oliviero designed this year's ballot in Chenango County, N.Y. She says most voters figure it out just fine, but there are always a few who struggle with the ovals.

"We do have voters that don't fill it in, and they 'x' or check," she says. "But I feel that [the instructions] make it simple and it makes it so people should know you fill the oval in and then you cast your ballot."

One problem, says Quesenbery, is that voters won't read the directions at the bottom of the page. If New York's election code allowed for it, she recommends the county condense its 276-word instructions and bump them to the top.

"The basic rule is [instructions] should be before the thing you have to do," she explains.

Quesenbery says tiny design flaws like these likely result in "little ballot errors all over the country."

This year, the errors weren't so little. New York City's voters were subject to a series of setbacks after the election board unrolled a perforated two-page ballot. Voters who didn't know they had to tear at the edges to get at the entire ballot ended up skipping the middle pages. Then the fat ballots jammed the scanners, long lines formed, and people's ballots got soaked in the rain. When voters fed the soggy ballots into scanners, more machines malfunctioned.

In Georgia, hundreds blundered on their absentee ballot, incorrectly filling out the birth date section. Counties originally threw out the ballots before a federal judge ordered they be counted.

And in Broward County, Fla., 30,000 people who voted for governor skipped the contest for U.S. Senate. The county's election board had placed that contest under a block of multi-lingual instructions, which ran halfway down the page. Quesenbery says voters scanning the instructions likely skimmed right over the race.

She has seen this design before. In 2009, King County, Wash., buried a tax initiative under a text-heavy column of instructions. An estimated 40,000 voters ended up missing the contest, leading the state to pass a bill mandating ballot directions look significantly different from the contests below.

"We know the answers," says Quesenbery. "I wish we were making new mistakes, not making the same old mistakes."