Accessibility links
Understaffed And Overworked: Firefighters Exhausted By Severe California Fires As major wildfires increase in California, some firefighters are being pushed to the point of exhaustion — and overtime costs are soaring. 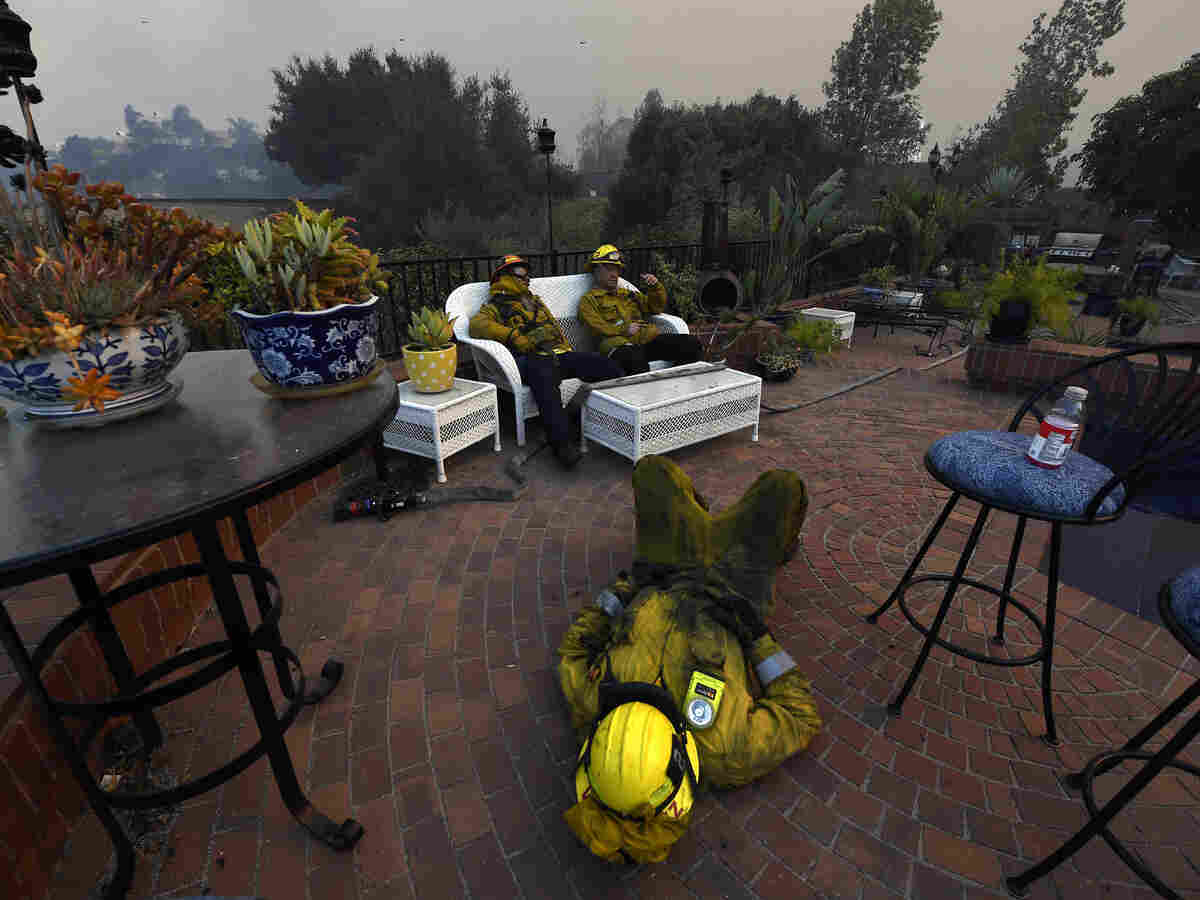 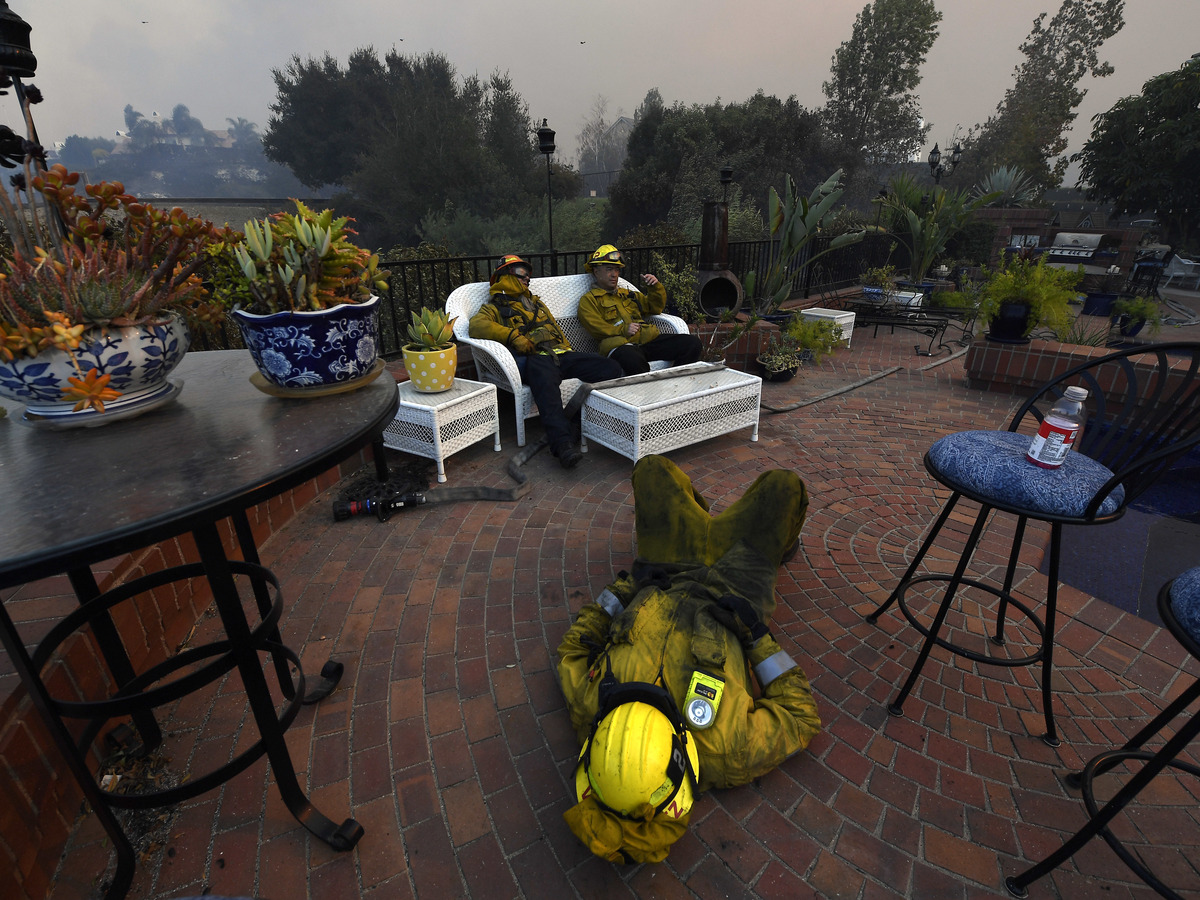 Los Angeles City firefighters Omar Velasquez (center), sleeps as Cory Darrigo (left), and Sam Quan rest in the backyard of home they were protecting after fighting the Woolsey Fire on Nov. 9, in Westlake Village, Calif.

Firefighters from the Los Angeles city fire department had just returned to their station after responding to the mass shooting at the Borderline Bar & Grill in Thousand Oaks, Calif. when they saw smoke filling the sky.

Roughly 12 hours after responding to one horrific incident, they were on their way to another.

That afternoon they were fighting the Woolsey Fire, one of the largest on record to burn in Los Angeles County, according to member station KPCC. They didn't get a break until one week later, when they finally asked for help.

Because of a longer fire season and chronic understaffing, firefighters are left exhausted, overworked and emotionally taxed — and overtime is becoming a point of contention.

It's Frank Lima's job to help firefighters get the resources and rest they need. As the vice president of the International Association of Fire Fighters (IAFF), Lima listens to the concerns of firefighters in his region, provides resources such as counseling, and advocates for firefighters in bargaining agreements.

In firefighting, overtime work is expected in order to respond to emergencies and ensure that a station is fully staffed. In recent years, though, Lima said the use of overtime has ballooned in many departments due to staffing issues, heightened by the increasing frequency and destructiveness of California's wildfires.

The L.A. Times recently looked at overtime data from the LA County Fire Department and found that overtime costs had surged 36 percent in recent years.

Other counties that have a contract with the California Department of Forestry and Fire Protection, or Cal Fire, to protect both local and state land show similar spikes.

Across five counties, the percentage of firefighter's wages that was overtime pay steadily crept up between 2012 and 2017, an average of about 1.5 percentage points per year. This is a significant increase, according to Frank Neuhauser, a senior research associate at UC Berkeley's Institute for the Study of Societal Issues and an expert on workplace insurance.

"That's a very steep trend for something like this," he said. "Imagine this trend continuing, you'd see pay go up twenty percent in twenty years. If you look at private industry, it's probably more of a flat line."

All but one of the counties analyzed had overtime wage percentages of over 30 percent of total wages in 2017. In private industry, according to Neuhauser, overtime percentages of total pay range between 5 and 10 percent.

"I've been a firefighter with LA city fire department for over 26 years," Lima said. "It wasn't like that when I started; [it] wasn't like it is now for overtime work."

The most Rick Swan has ever worked without a day off was 32 days in a row, fighting two fires back-to-back in 2007. Swan is the IAFF director of Wildland Fire Fighting Safety and Response.

"When I was working, that was not the norm; nowadays, it's the norm," Swan said. "We've got members today doing 32 days, taking two days off, and going back for another 30 days."

Part of the issue is a longer fire season.

"The number of fires has not necessarily gone up much, but it's the duration," Swan said. "We didn't have some of these large, huge fires that take forever to clean up."

In the past 13 months, California has seen two of its largest wildfires in terms of acreage, two of its most destructive blazes in terms of structures lost, and the deadliest fire on record, which has claimed at least 85 lives.

Over the summer, the Carr Fire burned over 220,000 acres and destroyed about 1,600 structures, making it the seventh largest and seventh most destructive wildfire in the state's history. California Gov. Jerry Brown called the rampant wildfires across the state a "new normal" in early August and warned of the financial stress that the fires could bring.

If the governor of California is saying this is the new norm, we should be staffing for the new norm.

Understaffing issues in many departments

In response to worsening wildfires, Swan would like to see increased hiring of firefighters, which would require a bigger firefighting budget.

"If the governor of California is saying this is the new norm, we should be staffing for the new norm," Swan said. 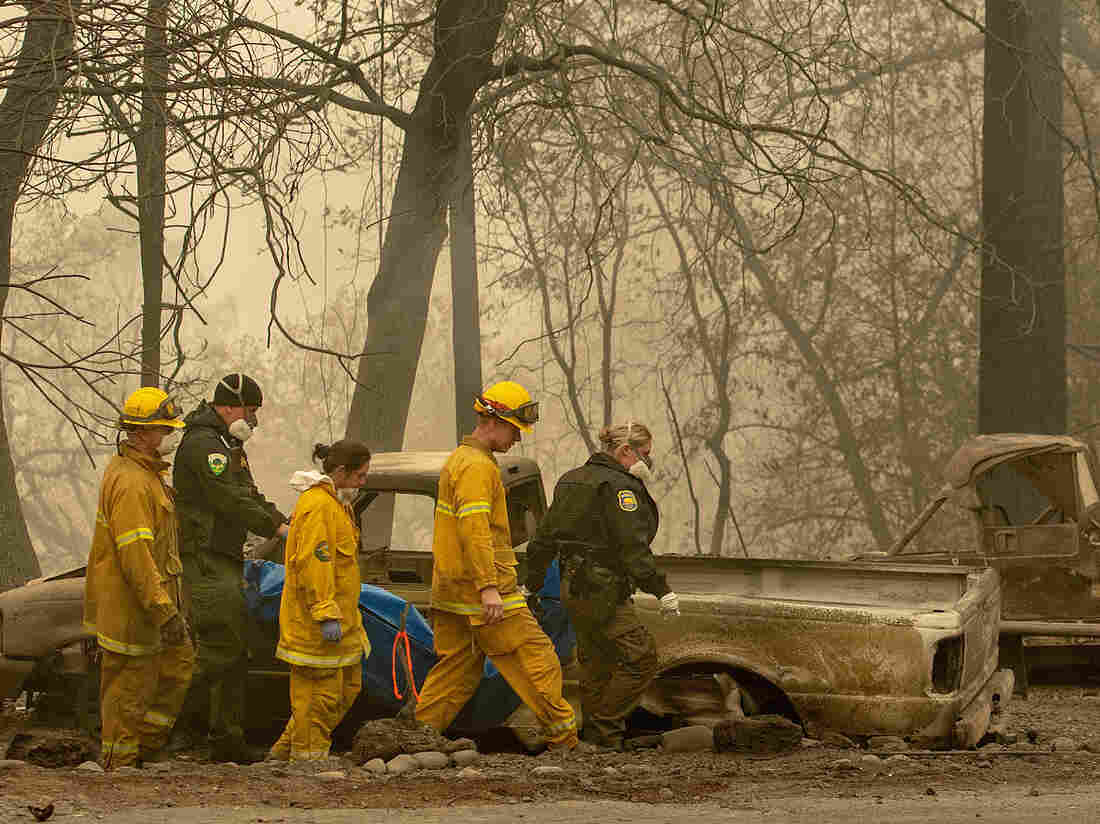 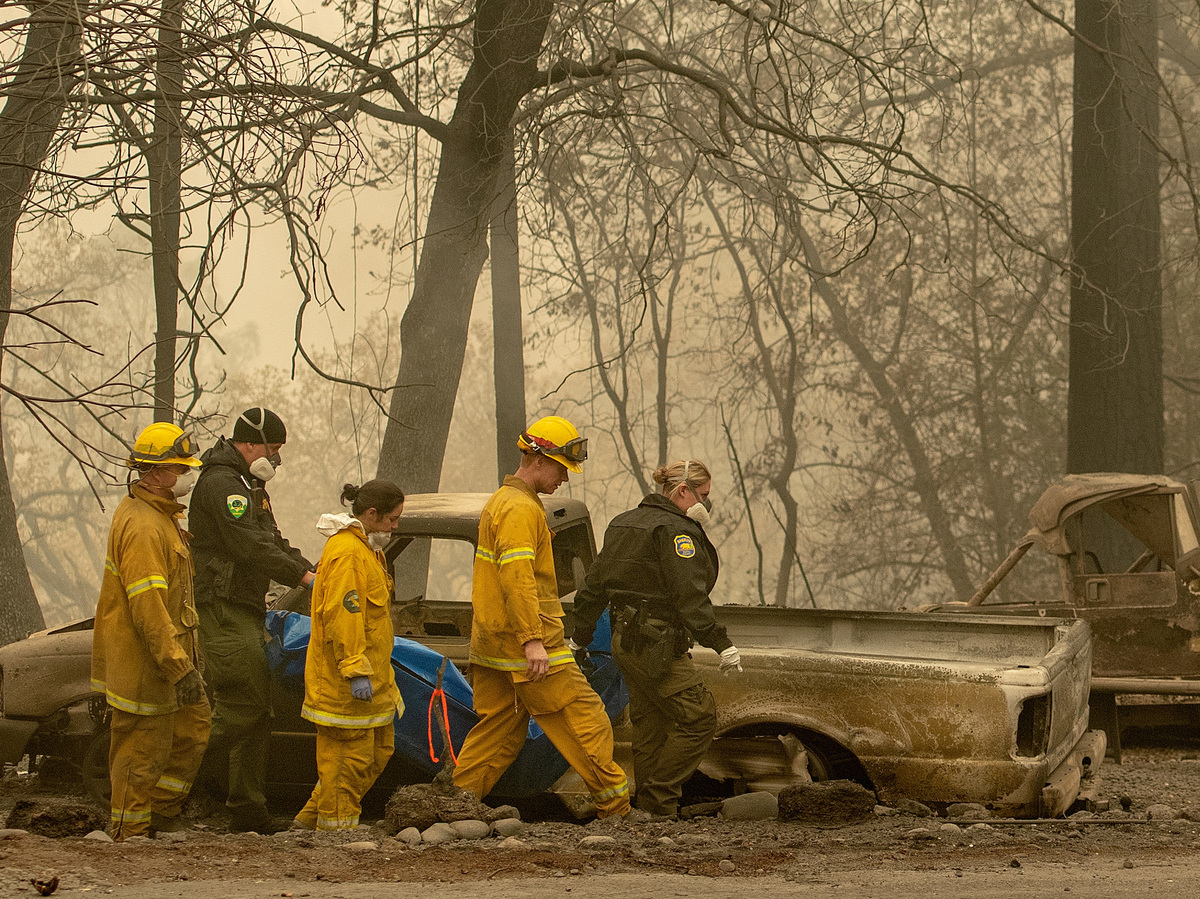 Rescue workers carry a body away from a burned property in Paradise, Calif., on Nov. 14.

As a result, Swan and Lima say understaffing is a perpetual issue, not just during times of wildfires. Lima's own L.A. City Fire Department went almost six years without hiring new firefighters. At the same time, hundreds of people retired, leaving vacancies that sat unfilled.

"We were so depleted that many were forced to work overtime," he said.

Hiring new firefighters is a long process, complicated by local budget restrictions. Mike Towns, a battalion chief for the San Mateo Consolidated Fire Department, said that between background checks and academy training, it can take six to nine months just to hire one new firefighter.

Still, he tries to staff three extra firefighters per shift than the department's required 41 in order to anticipate emergency situations.

"It's a really fine line, you don't want to over-staff too much," he said, adding that doing so would waste taxpayer money.

Fighting Fires For Free, Aging Volunteers Struggle To Recruit The Next Generation

In the first 24 to 48 hours of a massive inferno like the Camp Fire, no one sleeps.

The last couple of years have been crazy in California.

Bret McTigue, a battalion chief in Marin County, said his strike teams arrived an hour after Camp Fire broke out. For four days straight, they stayed on the fire line.

"They didn't feel comfortable leaving. Consciously, they have a tough time leaving the fire line," he said. "It's tough but the adrenaline keeps you going, and they want to save lives and buildings."

In initial fire response, departments use a "24 hours on, 24 hours off cycle." Here's what that looks like:

Firefighters wake up early. They go to a 7 a.m. briefing at base camp, then spend hours traveling to fire-fighting locations. They arrive at the fire line by 10 a.m.

For the next 24 hours, they'll battle the blazes. They are relieved the next day by 10 a.m. when a new shift comes in. They can't rest until they arrive back at base camp, typically by 1 p.m.

Then, the cycle repeats.

"We try to minimize spending 24 hours directly on the fire line," McTigue said. "But they might literally lay down in someone's front yard and get 20 minutes of sleep. They're pushed to the point of exhaustion." 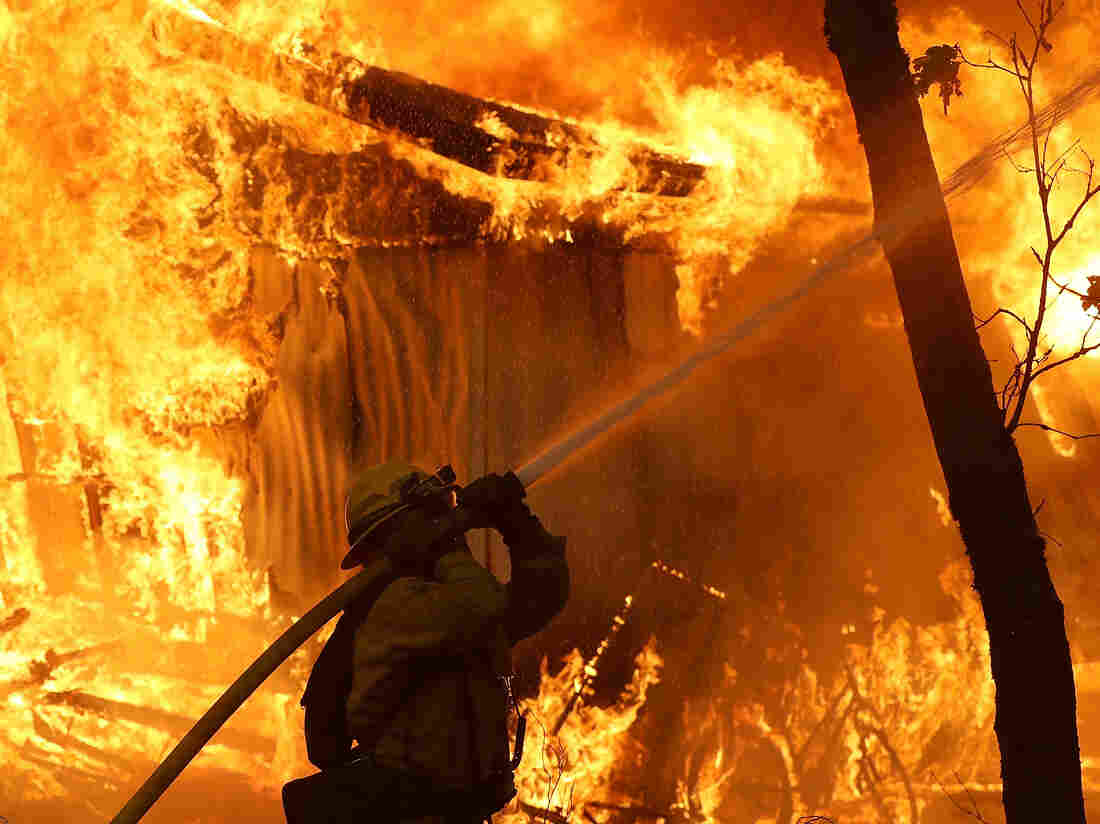 A Cal Fire firefighter monitors a burning home as the Camp Fire moves through the area on Nov. 9. Justin Sullivan/Getty Images hide caption 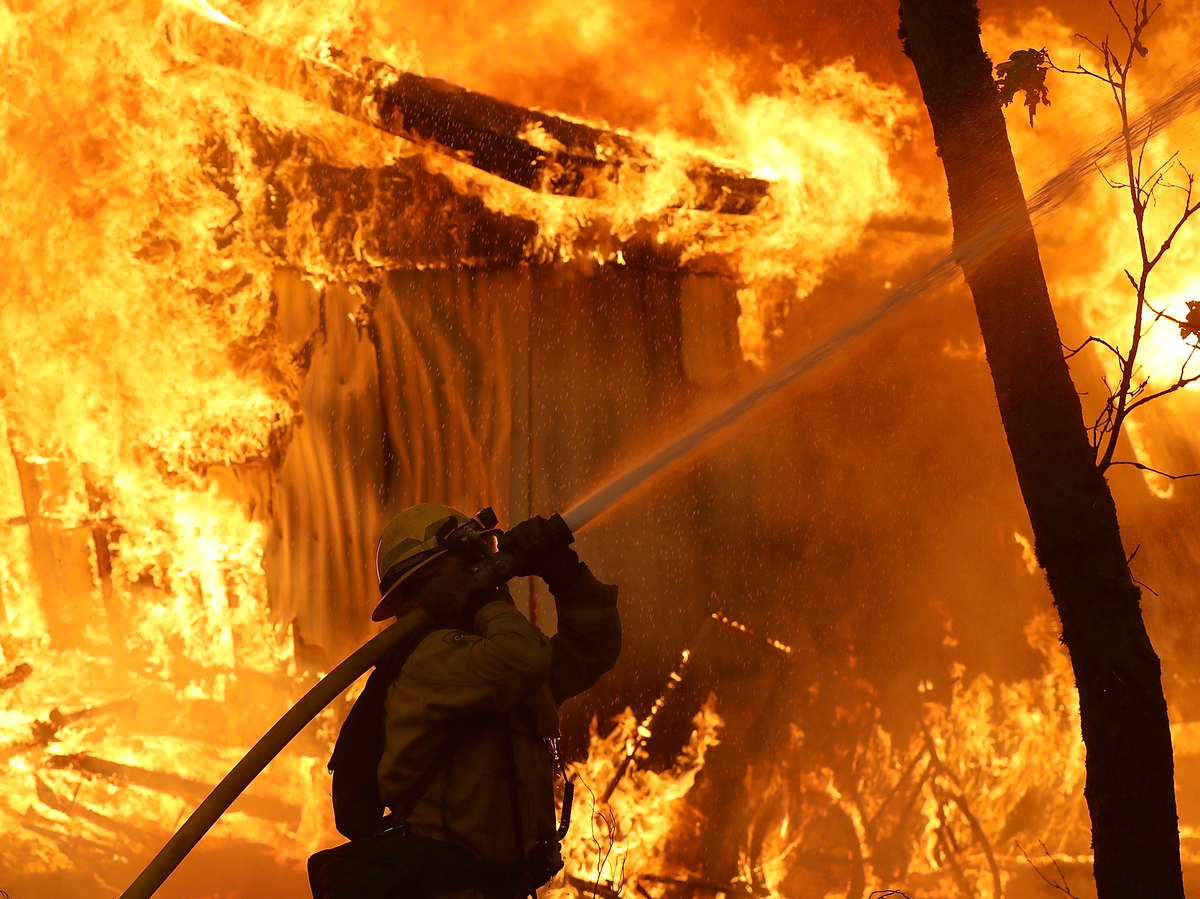 A Cal Fire firefighter monitors a burning home as the Camp Fire moves through the area on Nov. 9.

"Two weeks is our check in point," McTigue said. "We like to swap out the crews and bring in relief crews. But the people back in Marin aren't fresh."

If firefighters can continue, local department will hold them for another seven days, matching the 21-day deployment that Cal Fire firefighters serve. Working 21 days in a row is becoming more common as large California wildfires burn for weeks on end.

"The last couple of years have been crazy in California," Towns said.

Overtime works differently for Cal Fire firefighters and local firefighters. Local firefighters work two consecutive days accumulating 48 hours at normal pay. If they work on a day that they are not scheduled for duty, they earn overtime.

Cal Fire firefighters work three consecutive days, accumulating 72 hours, 19 of which is paid as overtime. The rest is paid at minimum wage. After 72 hours, all hours are overtime.

In the 2017-2018 fire season, Cal Fire estimated the total emergency fund fire suppression expenditures to be $773 million, a number they're still tabulating. It's already an increase from 2016-2017, when the total expenditure was $534 million.

The emergency fund fire suppression expenditures are normally paid for by the state, which will also reimburse local agencies for the cost of fighting major fires under the mutual aid agreement. However, the White House recently approved Major Disaster and Emergency Declarations for the devastating fires in Los Angeles, Ventura and Butte counties, which means that Federal Emergency Management Agency (FEMA) will assist with 75 percent of those fire suppression costs.

Hiring for fire season typically means that Cal Fire employs thousands of seasonal workers from June 1 to Nov. 1. Some work in contract counties, such as Marin County, since those counties have an agreement with Cal Fire to protect both local and state land.

Last year, McTigue noticed that Marin county received their seasonal workers in May, once the National Weather Service had issued red flag warnings and fire weather watches. It was one month earlier than usual.

Then, the seasonal workers, usually laid off in Nov. 1, weren't laid off until January 2018.

Though this year started normally, McTigue said it's likely that seasonal workers will stay until December, or even January, considering that it is already past the typical Nov. 1 deadline.

"We're staffing almost all year round," McTigue said. "There's no doubt in the last three years we've had the most major fires in the state, the duration of the fires is longer, and there's a higher cost."

I've seen more coworkers die of suicide in the last seven years than the 20 years before that.

Fighting fires while feeling drained can lead to more accidents on the job, but can also have an emotional impact that both Rick Swan and Frank Lima of IAFF say is just as serious.

Firefighters need time to process the horrific things that they see when they're on the front lines, time that they often lack, according to Lima. He said this places them at higher risk for PTSD or other mental health issues.

"I've seen more coworkers die of suicide in the last seven years than the 20 years before that," he said.

It's a trend that Swan also noticed over the course of his 30-plus-year career with Cal Fire and subsequent career with IAFF. Though IAFF offers a number of counseling services and support, both Swan and Lima say mental health problems, drug abuse and alcoholism are common among firefighters trying to cope with their emotions.

Swan still remembers how he felt fighting fires for days on end.

"People get frustrated because they end up going from one fire to the next or working the same fire for a long time." he said. "It's kind of this Groundhog Day effect. It goes on and on."