Accessibility links
Just How Tight Are Family Ties When Your Sister's A 'Serial Killer'? Oyinkan Braithwaite's wry, sly debut novel follows two sisters, dowdy Korede and gorgeous Ayoola — who has a habit of killing her boyfriends. Korede cleans up her sister's messes, but for how long?

Just How Tight Are Family Ties When Your Sister's A 'Serial Killer'?

Just How Tight Are Family Ties When Your Sister's A 'Serial Killer'? 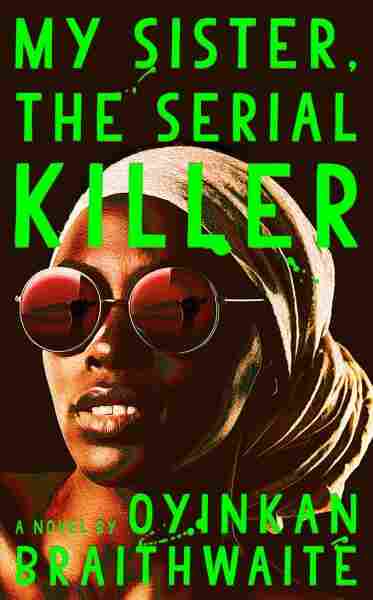 My Sister, the Serial Killer

"I am not angry. If anything, I am tired," Korede says, faced with yet another bloody crime scene to scour, yet another body to dump. The first few times, her beautiful sister Ayoola's self-defense claims seemed plausible, but the bodies have added up. And Korede Googled it: Three murders makes you a serial killer.

My Sister, the Serial Killer, the wry debut novel by Nigerian writer Oyinkan Braithwaite, tests the bonds of family, when family comes armed. The title says it all: Ayoola likes to kill her boyfriends. Korede can't quite bear to see her get caught: "Ayoola needs me; she needs me more than I need untainted hands." So, the gloves come on and the bleach comes out.

Ayoola is stunning, a "Bratz doll" next to her sister, who looks more like a "voodoo figurine." Men fall easy prey to her, while her looks make it impossible to for anyone to imagine she could be guilty of murder. If she went to trial, Korede thinks, she might be able to convince the court that her "actions were the fault of her victims and she had just acted as any reasonable, gorgeous person would."

So for Ayoola to be stopped, Korede will have to stop her. And there is suddenly a very strong motive for her to try when Ayoola picks her next boyfriend: the man Korede is in love with. That is the question at the tense heart of this novel. Who will she protect? Ayoola, who is selfish and violent — but family — or Tade, a doctor with soulful eyes and a "voice like the ocean"?

"There is no terror in the bang, only in the anticipation of it," as the (possibly apocryphal) Alfred Hitchcock quote goes. My Sister, the Serial Killer uses a familiar but irresistible formula: Give us a killer chasing a sympathetic character, make the writing plain so style doesn't get in the way, add some beauty and the threat of blood, and most of us are snared.

Braithwaite borrows as much from soap operas as from Hitch: there's a man in a coma, in whom Korede confides about her sister ("Come on," I yelled pointlessly at the book. "Obviously the coma guy will wake up and remember everything!"). There is plenty of Lady Macbeth-style scrubbing and a heavy-handed game of Clue with the presumptive next victim. But Braithwaite is at her best when she restrains these flamboyant impulses, and hews to vicious, delicious deadpan.

If Ayoola has a moral code, it is this: Men are shallow, and deserve what they get. "[H]e isn't all that different from the rest of them, you know." Ayoola says of Tade. "He isn't deep. All he wants is a pretty face. That's all they ever want."

... the most pressing question at the sour, sly heart of 'My Sister, the Serial Killer' is the basic one: 'What happened next?'

One of the novel's few moving moments comes when Korede finally decides to try to warn Tade off — and in the process, realizes he really is no different from other men. Ayoola may be a killer, but on the subject of men, she is proven right, again and again. Tade has decided to propose to Ayoola, and when Korede asks why, he can only muster that she is "beautiful and perfect."

"He fails to point out that she laughs at the silliest things and never holds a grudge," Korede thinks furiously. "He hasn't mentioned how quick she is to cheat at games or that she can hemstitch a skirt without even looking at her fingers."

One could try to extract various weighty questions from this sparse novel: Does loyalty outweigh other virtues? What special claims do our families have on us? What does beauty do to character? Which social codes are worth following? But the most pressing question at the sour, sly heart of My Sister, the Serial Killer is the basic one: "What happened next?"