Accessibility links
'They Know I'm Different': Deportee Struggles In Iraq After Decades Living In U.S. Naser al-Shimary, a refugee in the U.S., was deported this year back to Iraq — where he hasn't lived since he was 2 and now fears for his life. 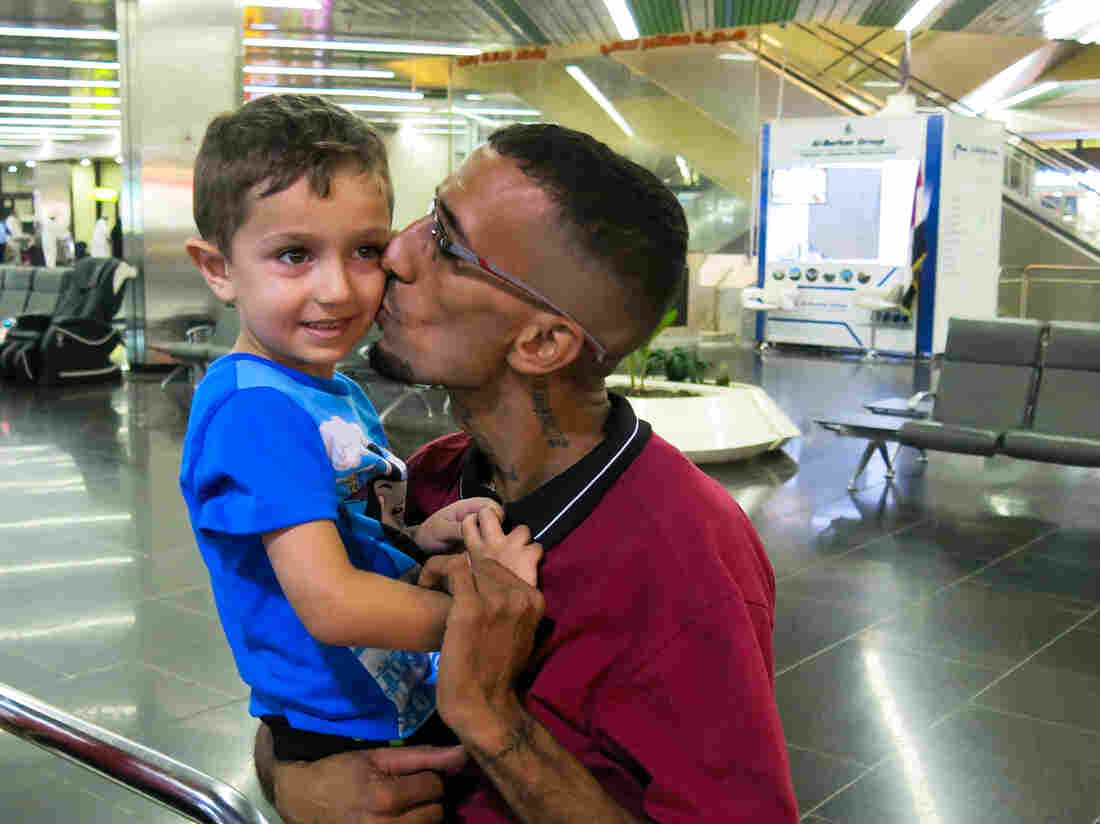 Naser al-Shimary, deported this year to Iraq from the U.S., greets his four-year-old son Vincent at Baghdad international airport. Shimary had lived in the U.S. since he was five years old. He agreed to be deported under a practice halted by a U.S. court this summer. Jane Arraf/NPR hide caption 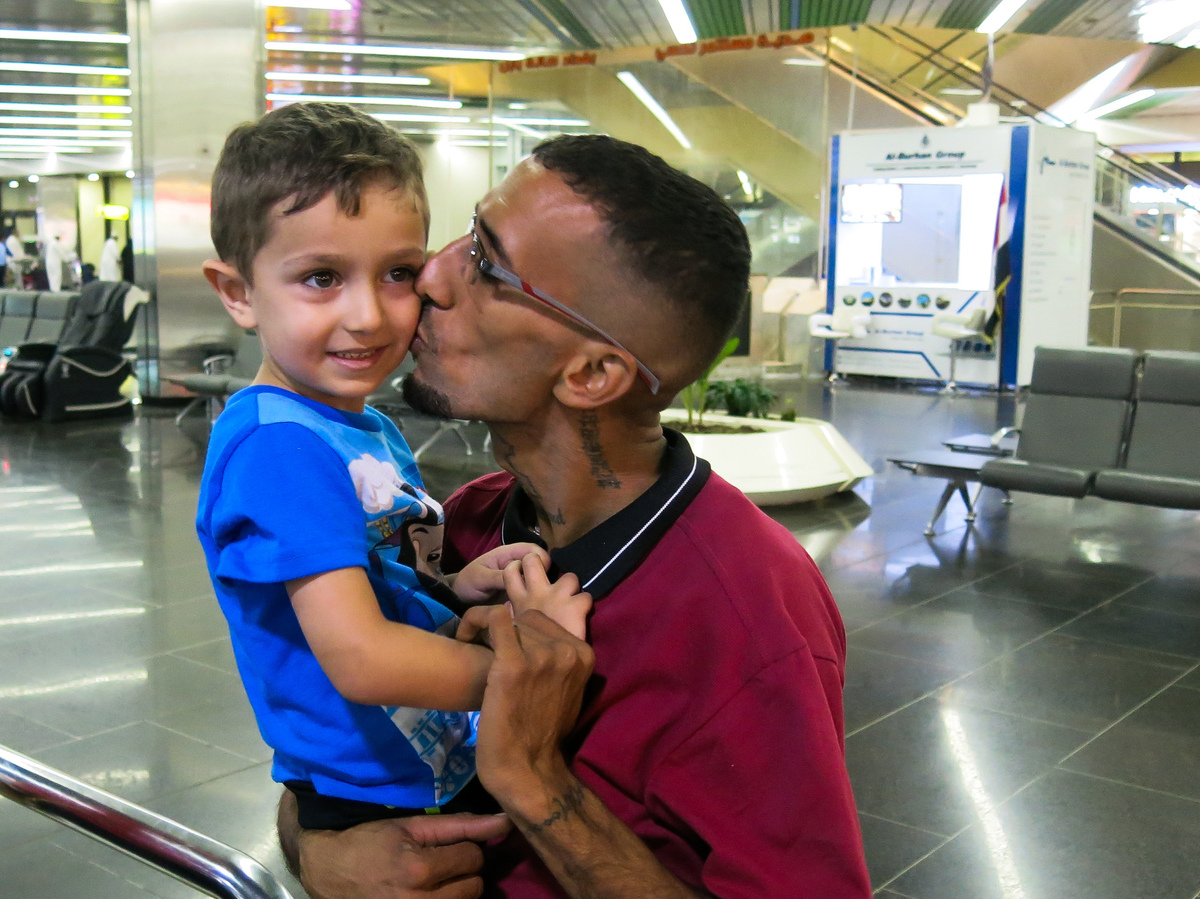 Naser al-Shimary, deported this year to Iraq from the U.S., greets his four-year-old son Vincent at Baghdad international airport. Shimary had lived in the U.S. since he was five years old. He agreed to be deported under a practice halted by a U.S. court this summer.

Naser al-Shimary is waiting at the arrivals gate at Baghdad's international airport. He says he's so nervous his "heart is skipping beats."

"Last time I held my wife and son was May 2017," says Shimary, 29, speaking English with an American accent. "That was the last time I got to kiss them and hold them."

Shimary is wearing a red polo shirt and jeans, tattoos with English and Chinese lettering of the names of his parents and brother on his neck and wrists. He's standing outside the same sliding glass doors he walked through eight months ago, after living in the U.S. for most of his life and being deported back to Iraq.

Shimary, who was a legal U.S. resident, was picked up in Detroit last year along with hundreds of other Iraqis, in an immigration sweep by federal agents responding to a White House order to accelerate deportations.

Under the Trump administration's tightening immigration rules, officials have detained residents across the country, on the basis of immigration violations or a past criminal conviction, and worked to deport them. Shimary had served time in prison.

The administration's efforts have hit a series of legal challenges. In June, a U.S. district court judge censured Immigration and Customs Enforcement agents over the roundup of Iraqis, saying ICE had misled and coerced detainees into agreeing to deportation.

Last week, the district court ordered the release of about 130 Iraqi detainees, some who had been held for up to a year, finding that there was no clear agreement with the Iraqi government on taking them back.

But those rulings came too late for Shimary. He says immigration agents threatened him with jail if he didn't agree to be deported to Iraq — a country he had not lived in since he was 2.

Shimary's family came to the U.S. as refugees in 1994, fleeing violence after a failed uprising against Iraqi dictator Saddam Hussein.

In Michigan, Shimary got a bachelor's degree, became a certified mechanic, bought a home and started a family. He was a permanent resident; his partner and their 4-year-old son are American.

Nine years ago, he was convicted of an assault on his brother-in-law in Michigan. He spent three years in prison.

"Everybody makes mistakes and I paid for my mistake," he says.

After he was released, he says he complied with annual check-ins at an immigration office and had no problem for the next five years. "I felt like, hey, I'm doing good," he says. "They're not going to bother me as long as I'm doing good. That I'm not making no problems."

But in May 2017, Shimary went to what he thought was a routine check-in. He was told the immigration authorities were revoking his supervision for bureaucratic reasons and that he would be detained for 15-30 days. Instead, over a period of three weeks, officials shuttled him between detention centers in Ohio, Louisiana and Arizona. Then they put him on a plane with 87 other Iraqis being deported.

That deportation was halted when it turned out Iraq hadn't agreed to take back unwilling detainees — a requirement for carrying out a removal order. Iraq doesn't accept deportees who have not agreed to return.

Shimary says he ultimately agreed to be deported after Immigration and Customs Enforcement officials falsely told him that if he didn't, he could be imprisoned for 10 years for resisting deportation. ICE agents pressured him to sign a document from the Iraqi Embassy in Washington, D.C., consenting to be sent to Iraq, Shimary says.

He adds that the agents told him Iraq had now agreed to accept him.

The ICE media office said it could not comment on the case because of ongoing litigation.

"I made a mistake, signing those papers," Shimary says.

In February, without notifying his family, he says, the U.S. deported him to Iraq. 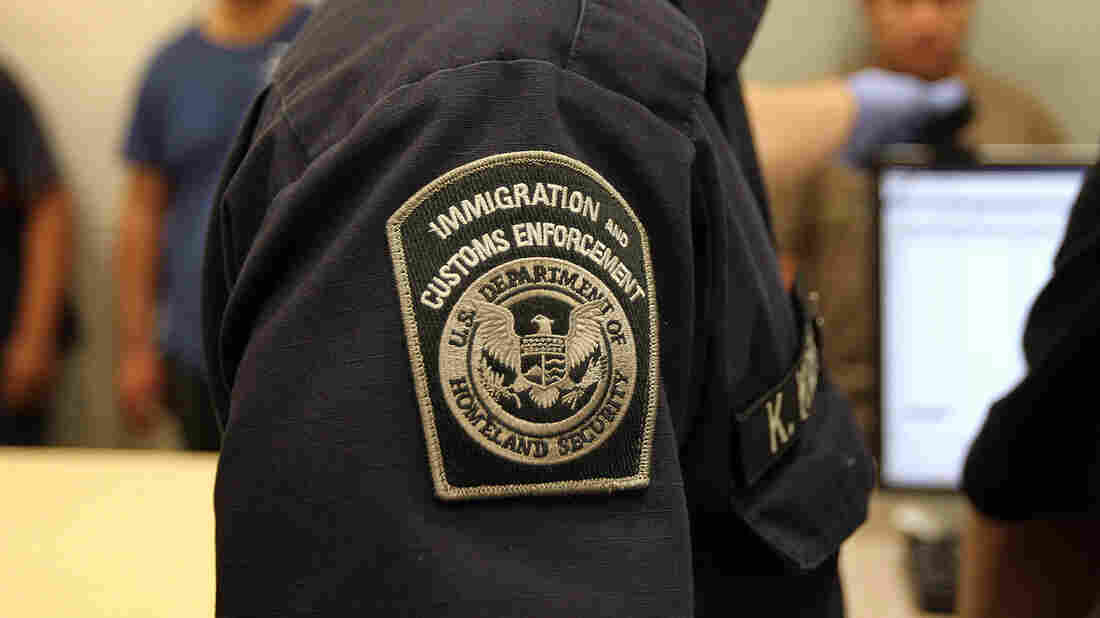 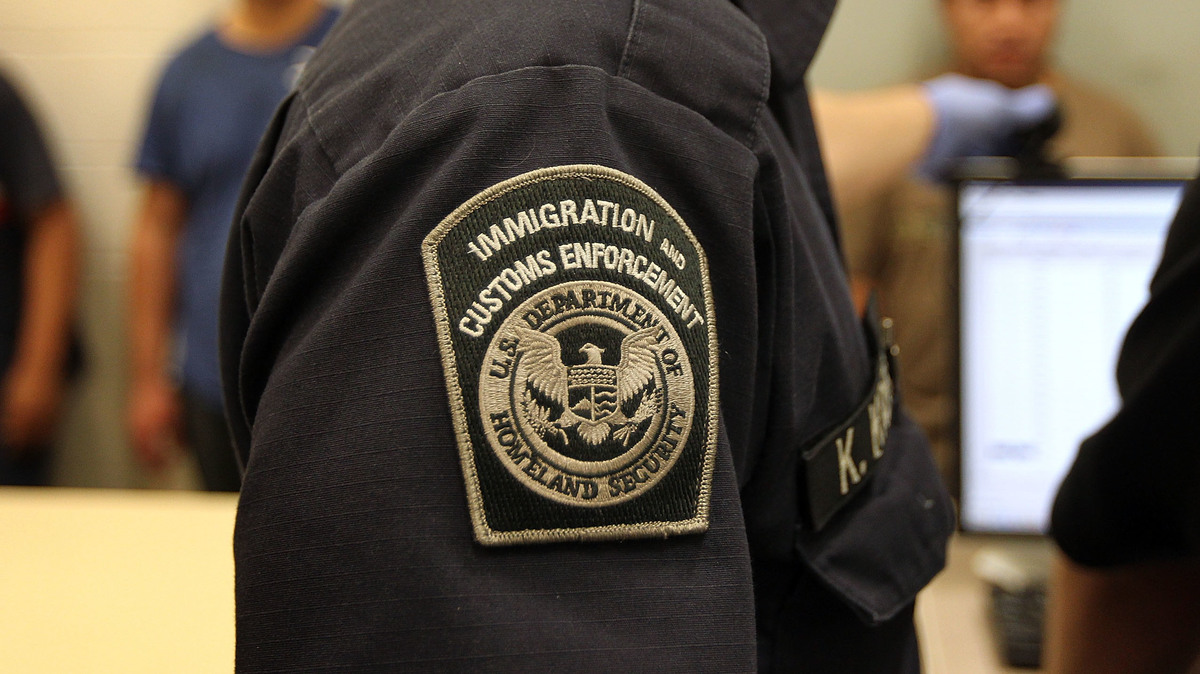 Immigration and Customs Enforcement officers process immigrants at a detention center in Phoenix.

Shimary landed in Baghdad with no money, no phone and only broken Arabic. After two days in Iraq's capital city, staying with a relative he'd never met before, he had to leave. His relative "said it was for his family's safety and mine," Shimary says.

He ended up in a makeshift house near the city of Najaf, south of Baghdad.

"People look at me differently. Even though I'm Iraqi by birth I'm not Iraqi to them. They know I'm different," he says.

Shimary says he has struggled to find work.

"They'd rather have a 10-year-old, 11-year-old kid work instead. They won't hire me because of who I am and where I come from," he says.

He doesn't read or write Arabic and often pronounces Iraq with a long "I" — like many Americans, but not Iraqis. He says his worst fear is that people will realize he's come from the United States.

"Even though I speak Arabic I still use the English language with it," he says. "So I slip up and they say, 'Hey, you didn't just speak English, did you?' I tell them, 'No, I was speaking French.' And I have to lie. I have to lie just so I can feel safe."

Shimary says he was attacked four months ago by a group of men he didn't know — beaten up so badly, he had to crawl home with two cracked ribs. He says people in the neighborhood were too afraid to help him.

Since then, he is terrified of almost everything in Iraq. In the morning, he asks a neighbor to check the sides and front of his house to see if there's anyone hiding there, waiting to jump him, before he opens the door. As soon as night falls, he locks the door with a padlock and chain.

"By 8 o'clock I barricade myself in. Like I'm in jail," he says. "I don't open the door for no one. Literally no one. Even if my neighbors are sitting outside."

There are credible fears for deportees in Iraq, says Daniel W. Smith, an Iraq-based human rights researcher who has served as an expert witness in dozens of U.S. deportation cases.

"My biggest concern about Iraqis being deported is that they do not have the tools to survive in Iraq," Smith says.

In July 2017, the federal court in Michigan suspended more than 1,400 deportations to Iraq after the American Civil Liberties Union argued they were being sent back into danger.

Smith says many deportees arrive without valid Iraqi identification documents and risk being arrested or detained by Iraqi security forces and militias. They also risk being misperceived as U.S. spies.

Iraqi security forces have a history of secret detention centers. Even those held in regular prisons are often untraceable by their relatives.

The ACLU says the whereabouts of one Iraqi deported by the U.S. in violation of court orders in August are unknown. Shimary says he knows of two Iraqis who were deported from the United States who disappeared after arriving.

At the Baghdad airport, after an hour of waiting in the arrivals hall, Shimary spots his family through the glass. He's so excited he can barely stand still.

"There she is. I see her — she's wearing that red jacket," he says, grinning. "And there's my little man. I see him!"

Vincent runs up to his father and hugs and kisses him. Last time Shimary saw his son, he wasn't talking yet. In Iraq, he says he gets up in the middle of the night to talk to Vincent by Internet in the U.S. morning.

"It's been difficult," says Chelsea Ravasani, Shimary's partner, exhausted after a series of flights from the U.S.

Ravasani, 26, works at a mortgage company and is studying for a master's degree in information systems at Wayne State University in Detroit. She says she and Shimary are not married. They are trying to figure out how to stay together but she doesn't feel she can live in Iraq.

"We talked about maybe going to another country. Getting him back [to the U.S.] seems like the hardest," she says.

Vincent wants to show his dad the news toys he brought, nestled in a suitcase next to Superman underwear.

"What is this place?" Vincent asks his father.

"This is the airport," Shimary tells him. "This is Iraq."

It's supposed to be Shimary's home country. But he doesn't think he can survive here. The U.S. is the only home he's known.