Accessibility links
'Dance In America' Aims To Chronicle The Art In The U.S. Mindy Aloff has attempted the nearly impossible task of collecting, in an anthology, the essays, excerpts, and asides that create a snapshot of the history of American dance. 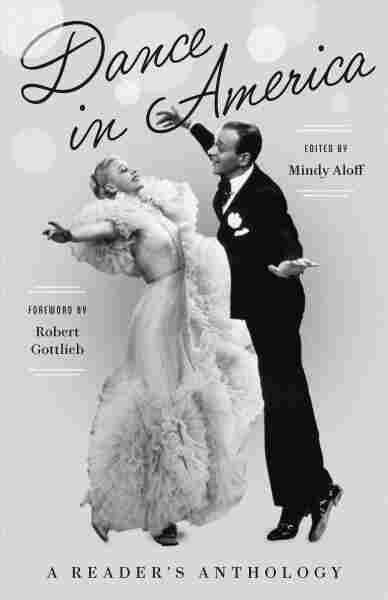 by Mindy Aloff and Robert Gottlieb

Lincoln Kirstein writes in one of his four pieces in Dance in America, "To write descriptions of dancing is even more aimless than to paint pictures of music."

Clearly that hasn't stopped him, or anyone else, from trying. Dancing means too much. We have to try to talk about it. But what a nearly impossible task, to collect the right essays, excerpts, and asides that will somehow become a definitive portrait of dance in America. It gets even tougher when your audience is equal parts academics and everyday fans.

But that is just what Mindy Aloff has attempted; her anthology, Dance in America, with all the appropriate Library of America heft, hopes to take a snapshot of the history of American dance.

There's certainly plenty of it. So much, in fact, this reference is best savored in small bites. The alphabetical order suggests you should make your own fun, sorting roughly by genre (memoirs, reviews, dissection), author (poet, dancer, critic), or mood (paean, rumination, aspersion). There's just enough modern work to catch mentions of the Internet, just enough deep history to intrigue, and an ongoing feeling that dance is as much a battlefield of personal taste as a cataloged art form. (It makes for an illuminating timeline that, among other things, traces changes in acceptable cultural vocabulary. Do a drinking game of "primitive" — used by turns to describe black people, Isadora Duncan sailing to Greece, notation systems, ballet, and Busby Berkeley's taste — and you'll get alcohol poisoning.)

With such a spread, it's no surprise many pieces work best in conversation. George Washington Cable's 19th-century description of Congo Square and Charles Dickens's visit to a New York dance hall make for pointed reading against Langston Hughes and Zora Neale Hurston's works on dance — a striking reminder that the narrative around dance is powerful, and changeable. We sense the dancer and the observer can never quite understand each other, but observation is the vastly more recognizable experience, even for dancers. And the overlapping, occasionally warring descriptions of Isadora Duncan embody the chaos of trying to write about dance. There is an ideal, somehow, inside anything; it's just always different. Anything can change. Everything will change.

That sense of dance as the eternally possible is the one thread that binds even the most disparate pieces in this anthology. Whether it's Arlene Croce discussing dance on film, José Limón waxing rhapsodic over Doris Humphrey's clarity of choreography, or Elizabeth Kendall on the sea change of ragtime as social dance, dance-as-conduit is everywhere. (Then there's Agnes de Mille's much more pragmatic view of it all: "Dancing was an honorable profession when it worked, which it so very seldom did.")

It goes on and on. In fact, with 100 selections spanning nearly 300 years, it might seem odd to think about what's missing. But even in her introduction, Aloff talked about rough decisions in the editing process. (I lament the 18-century dancing master who didn't make the cut.) Though there are works outside the expected canon, several iconic figures recur again and again. At first this feels like facets joining, but the further one goes, the more absences can seem like missed beats. Some dancers are written about, but their writings aren't included: Maria Tallchief, Ruth St. Denis, Carmelita Maracci. And there's a sense of a focal bell curve; ballet and classic modern dance are well-represented, while dances of indigenous Americans, Kathak dance, flamenco, tango, pop-star jazz appear only once, or only as afterthoughts. Some don't appear at all — understandable in a smaller anthology, but with so much room, and in an era where most of these show up on a given episode of So You Think You Can Dance, it seems odd how many styles adopted, imported, appropriated, or absorbed by American dance culture go unmentioned (600 pages and not a square dance or break dance in sight?).

But in those 600 pages are some truly stellar pieces — some personal, others dishy. Yehuda Hyman's "Three Hasidic Dances" is bittersweet memoir. Black Elk and John Gneisenau Neihardt's "The Horse Dance" is deeply evocative. Margaret Case Wilson's "Dance Team" is a sting pristinely delivered. Edmund Wilson's "The Finale at the Follies" is a priceless backstage snapshot. And Nancy Dalva's "Letter from Manhattan" talks about Paul Taylor's Esplanade and the moment the ineffable dance becomes personally engraved: "But if you spent the spring, as I did, watching someone progress into the wings, into death, into beyond what can be seen, what else could it mean, and what else can it mean, next year, or the year after that?"

There's always the return to the icons (a few more than necessary, if you were hoping for any of the dances at the ends of that bell curve). But the anthology's best pieces are illuminating and unexpected by turns, and Aloff has pulled some rare gems into this collection alongside the usual suspects. For something nearly impossible, that's not bad at all.