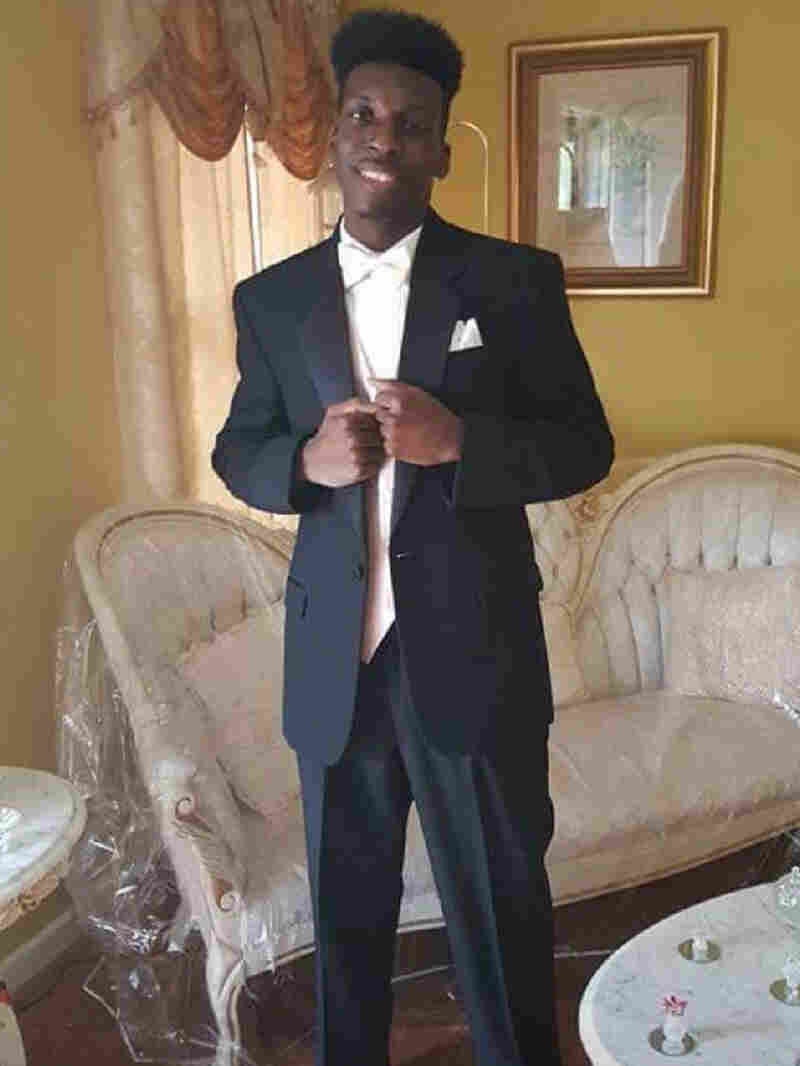 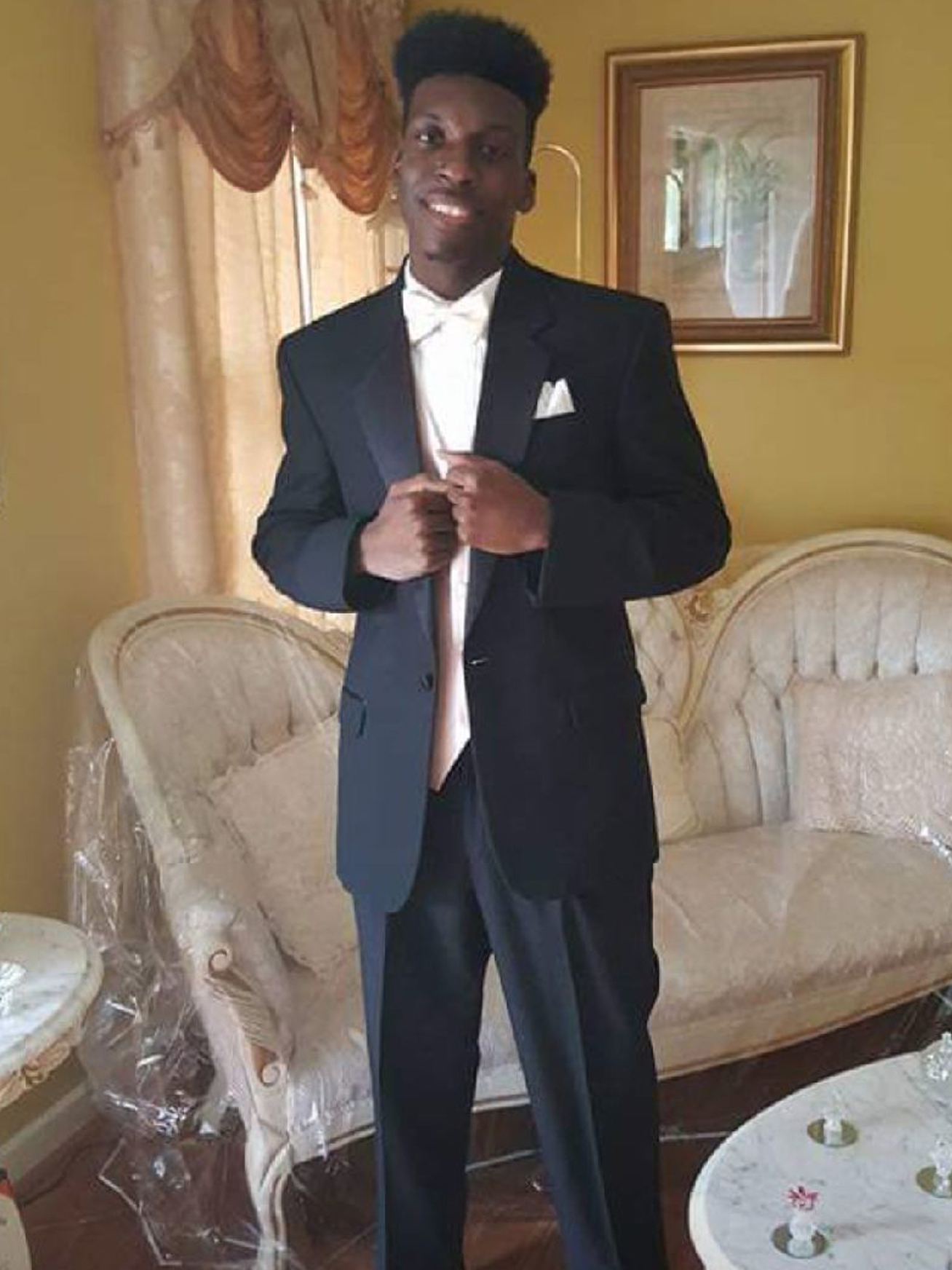 This undated image shows Emantic Bradford Jr., 21, posing for a picture at his father's home near Birmingham, Ala.

The family of Emantic "EJ" Bradford Jr., who died Thanksgiving night after he was shot by a police officer working security at an Alabama mall, is calling on the Hoover Police Department to release the mall video, witness videos and body camera footage of Bradford's death.

Initially, officials said Bradford was engaged in a fight with an 18-year-old at the Riverchase Galleria Mall in Hoover, Ala. when he pulled out a gun and shot the teen. A 12-year-old bystander also was wounded that night. That night, police and city officials hailed the quick response as "heroic."

But officials later retracted the statement, saying it was "highly unlikely" Bradford had fired the shots that injured two people.

In a statement early Monday, city and police officials said they can "say with certainty Mr. Bradford brandished a gun during the seconds following the gunshots, which instantly heightened the sense of threat to approaching police officers responding to the chaotic scene." Body camera and other available video was turned over to the Jefferson County Sheriff's Department as part of the investigation, and the evidence is now with the Alabama Law Enforcement Agency.

"We extend sympathy to the family of Emantic J. Bradford of Hueytown, who was shot and killed during Hoover Police efforts to secure the scene in the seconds following the original altercation and shooting. The loss of human life is a tragedy under any circumstances," the statement continued.

Members of Bradford's family spoke at a news conference Sunday, accompanied by their attorney, Ben Crump.

Crump says several witnesses have come forward since the shooting to say the police officer who killed Bradford didn't give any verbal commands to Bradford before shooting him in the face.

Officials also say the shooter could still be at large. Crump says police offered Bradford no medical assistance after the shooting. Family members were tearful at the news conference at Birmingham's Kelly Ingram Park. Several clutched photos of Bradford. At one point, Bradford's grandmother Althea Pipkin collapsed and was escorted away as she sobbed over her grandson's killing.

Crump and the family say it's just another instance of a black man dying at the hands of police. Crump has represented other black men who were killed by police or others, including Trayvon Martin and Michael Brown.

The officer who shot Bradford has since been placed on administrative leave. His name has not been released.

Neither the State Bureau of Investigations, which is handling the investigation, nor Hoover police officials have responded to requests for further comment.

Crump says the family's communication with the police department has been minimal. He says as of Sunday, the family still had not been contacted by Hoover police about Bradford's death. Instead, he says the Bradford family found out about his death through social media.

On Saturday, protesters walked through the mall chanting "Say his name — EJ" and carrying signs that read "Justice for E.J." and "Hoover PD Lied."

Protesters walk the inside of the Riverchase Galleria Mall. They're protesting the shooting death of #emanticbradford.@ShopRiverchase pic.twitter.com/AevYPs4lxY

E.J. Bradford Sr., who is a retired Birmingham jail employee, says he considers others in the law enforcement community as family. But he is angered by Hoover's quick conclusion to label his son the killer. Bradford Sr. says he called Hoover police at 12:30 a.m. Friday but was told they would call him back. He says they did not call him before they gave a media briefing and that he has yet to receive a call. 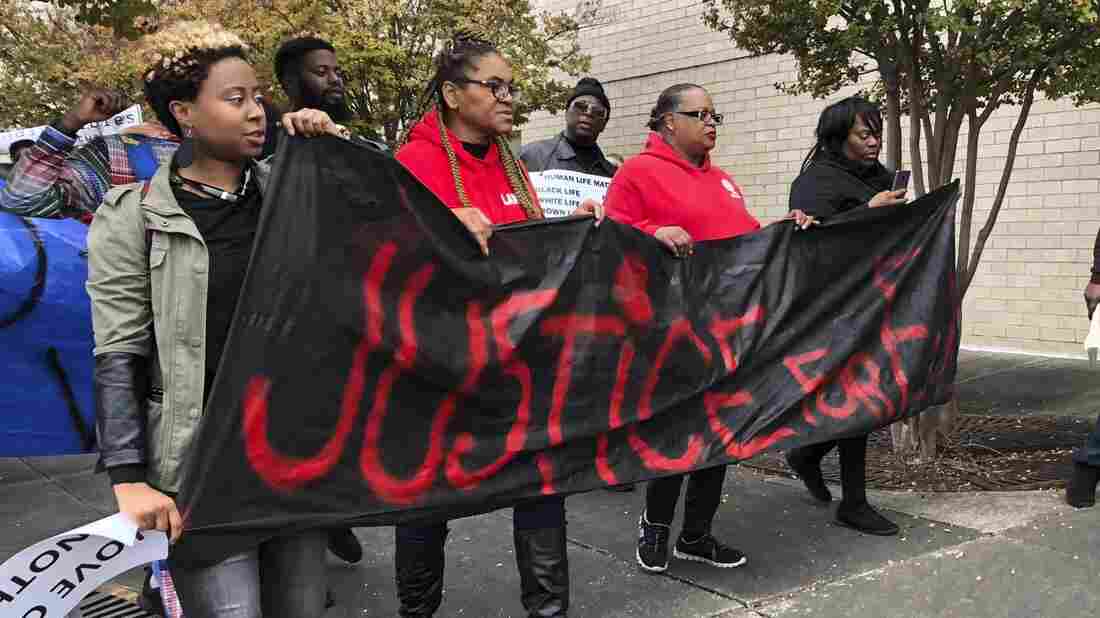 Demonstrators carry a sign reading "Justice for E.J." during a protest at the Riverchase Galleria in Hoover, Ala., Saturday. Kim Chandler/AP hide caption 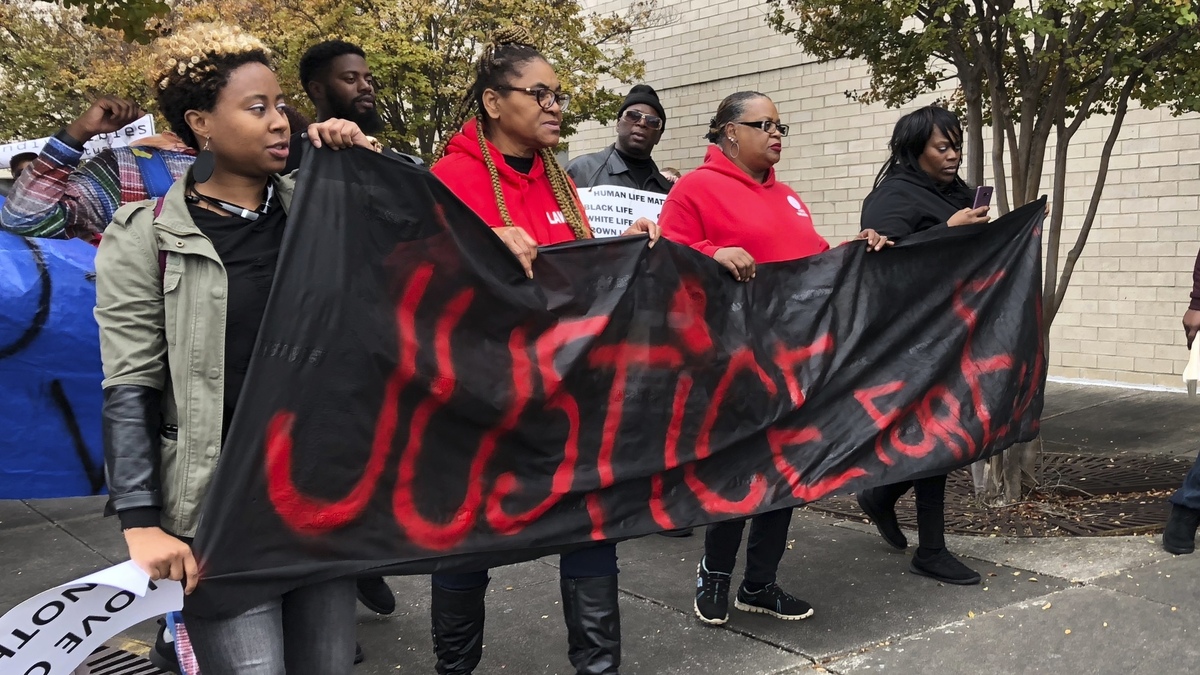 Demonstrators carry a sign reading "Justice for E.J." during a protest at the Riverchase Galleria in Hoover, Ala., Saturday.

April Pipkins, Bradford's mother, says Thanksgiving will never be the same again. Other family members joined Pipkins at the news conference. One of them was Clemon Brown, who is Bradford's younger brother. Brown says he blames the media for going with early police accounts.

"EJ was not that kind of guy at all," Brown says. "He was very respectful to his mother [and] his father."

The family says Bradford had been taking care of his father, who has cancer. Crump says the family is unsure as to whether it can have an open casket funeral because the police officer shot Bradford in the face. Law enforcement has not yet released any details about the fatal shooting. Crump says in the meantime, they are going to explore every possible legal avenue available on the state and federal level.

"What the family wants most is justice," Crump says.

Amita Kelly contributed to this report.