Accessibility links
As Many As 145 Pilot Whales Die Stranded On Remote New Zealand Island A hiker reported the mass stranding Saturday. By the time officials could reach the marine mammals, half were dead — and the rest were in such dire condition, they had to be euthanized. 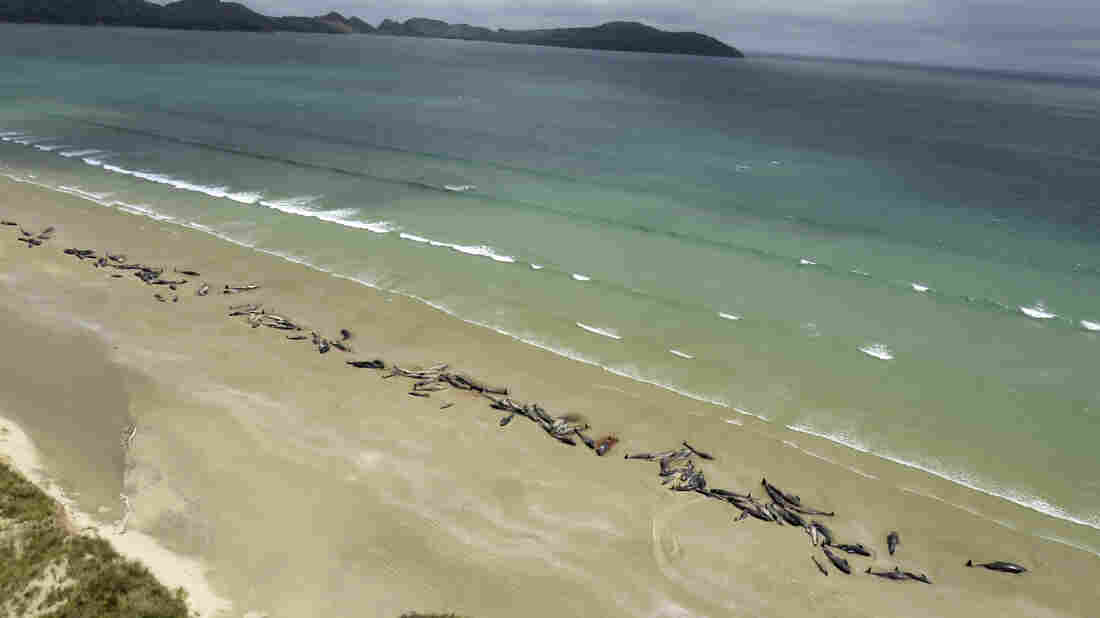 As many as 145 pilot whales lie beached Sunday at Mason Bay, on Stewart Island, New Zealand. A hiker reported the mass stranding on Saturday. New Zealand Department of Conservation via AP hide caption 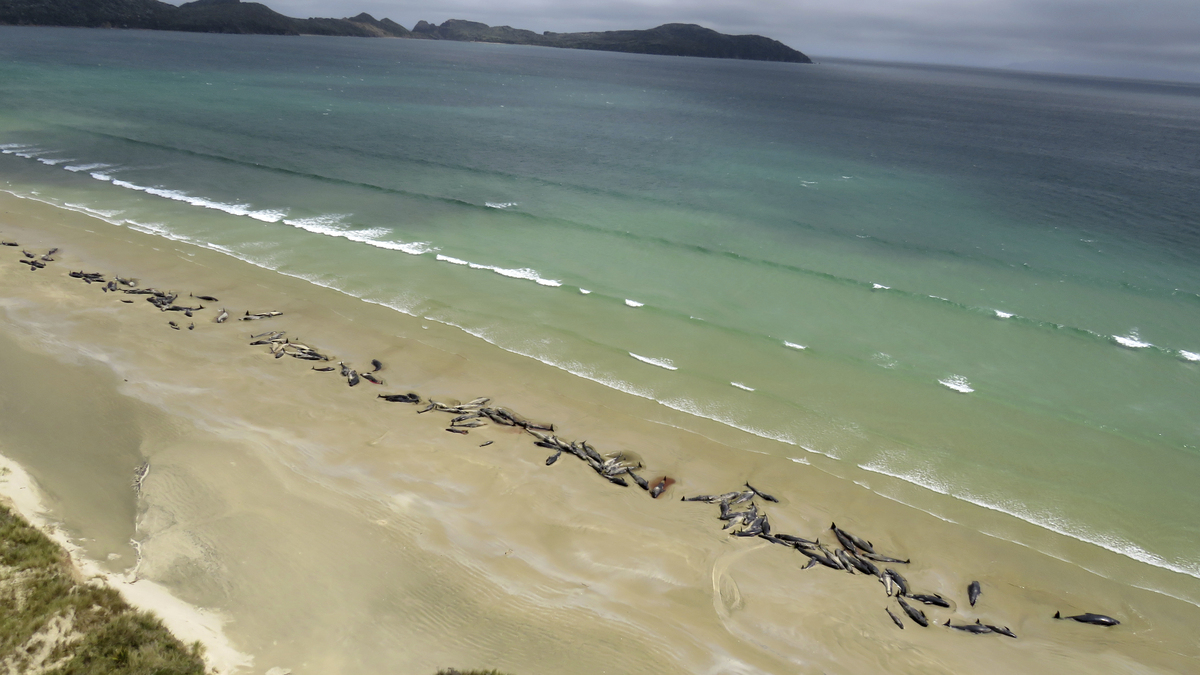 As many as 145 pilot whales lie beached Sunday at Mason Bay, on Stewart Island, New Zealand. A hiker reported the mass stranding on Saturday.

Over the weekend a hiker was tramping across Stewart Island, a remote locale in New Zealand's far southern regions, when the crest of a hill brought an unsettling vista into view: scores of dead pilot whales washed ashore on the beach.

As many as 145 of the marine mammals — which, contrary to their name, are technically classified as dolphins — were found stranded along Mason Bay, two pods strewn across the sands just over a mile apart. New Zealand's Department of Conservation, which was notified Saturday night, said half of them had already died by the time they were discovered.

The rest were in such a dire condition, and so difficult for experts to reach on short notice, that the department decided even the survivors needed to be euthanized.

"Sadly, the likelihood of being able to successfully re-float the remaining whales was extremely low. The remote location, lack of nearby personnel and the whales' deteriorating condition meant the most humane thing to do was to euthanise," the department's operations manager on the island, Ren Leppens, said in a statement released Monday.

"However," he added, "it's always a heart-breaking decision to make."

The sheer number of pilot whales made for a startling sight on an island of just 378 people. In video footage shot from an aircraft, the dead rest motionless in thick clusters, many half-buried in sand by the movements of the tide.

Alarming as this incident may be, such strandings are not uncommon in New Zealand. The Department of Conservation reported at least four other incidents across the country last weekend alone, none of which appear to be related.

Officials have not yet given up hope on one of those incidents, a stranding on Sunday that left 10 pygmy killer whales washed ashore near New Zealand's northernmost tip. Two of them have died, but authorities have called on volunteers to help them save the rest by re-floating them out to sea Tuesday.

Across a period of several days last year, more than 650 pilot whales beached themselves on a thin strip of land projecting off New Zealand's South Island.

Those strandings — some of the country's largest ever on record — reached a bittersweet ending, with roughly a third of the whales escaping to safety with the aid of volunteers.

It remains unclear why, exactly, such mass strandings occur.

"Factors can include sickness, navigational error, geographical features, a rapidly falling tide, being chased by a predator, or extreme weather," the New Zealand Department of Conservation explained. "More than one factor may contribute to a stranding."