Accessibility links
U.S. Climate Assessment: What You Need To Know The Trump administration released a major climate assessment on Black Friday. It is the most detailed and blunt assessment yet of the dangers of unchecked global warming. 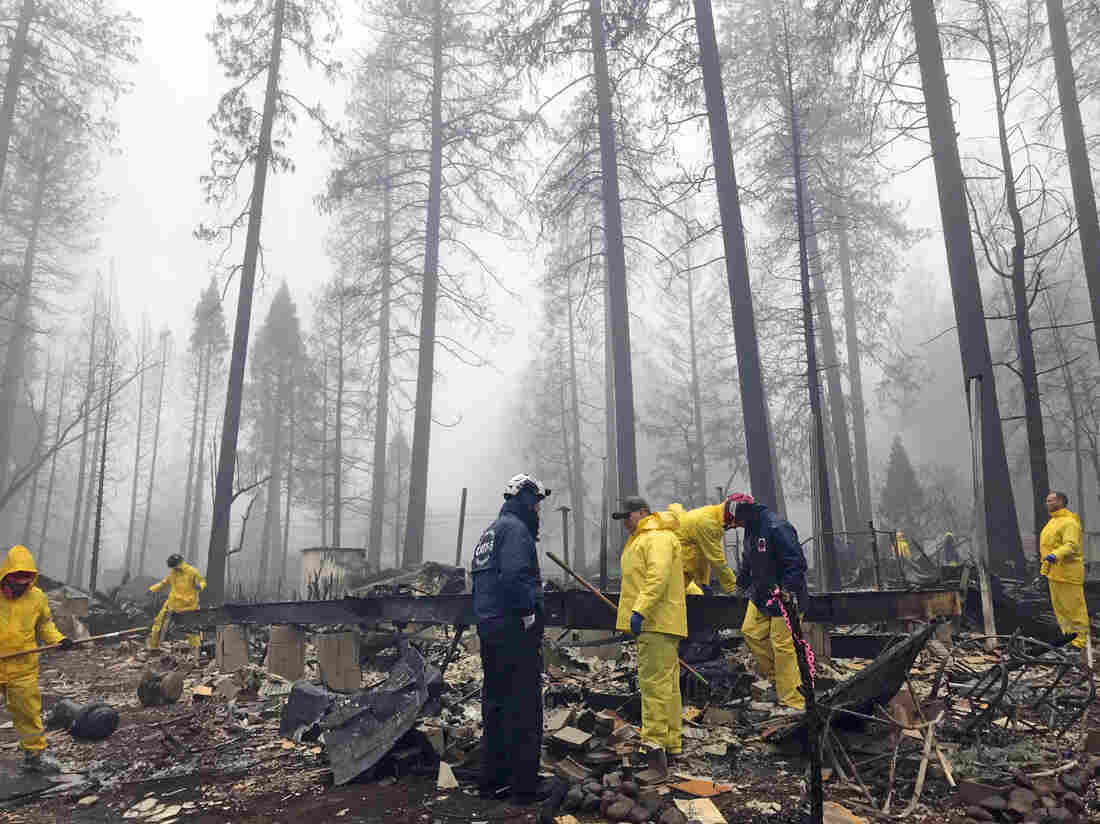 Volunteers search a mobile home park in Paradise, Calif. Government scientists predict wildfires like the one that struck this community will contribute to billions in losses for the U.S. economy. Kathleen Ronayne/AP hide caption 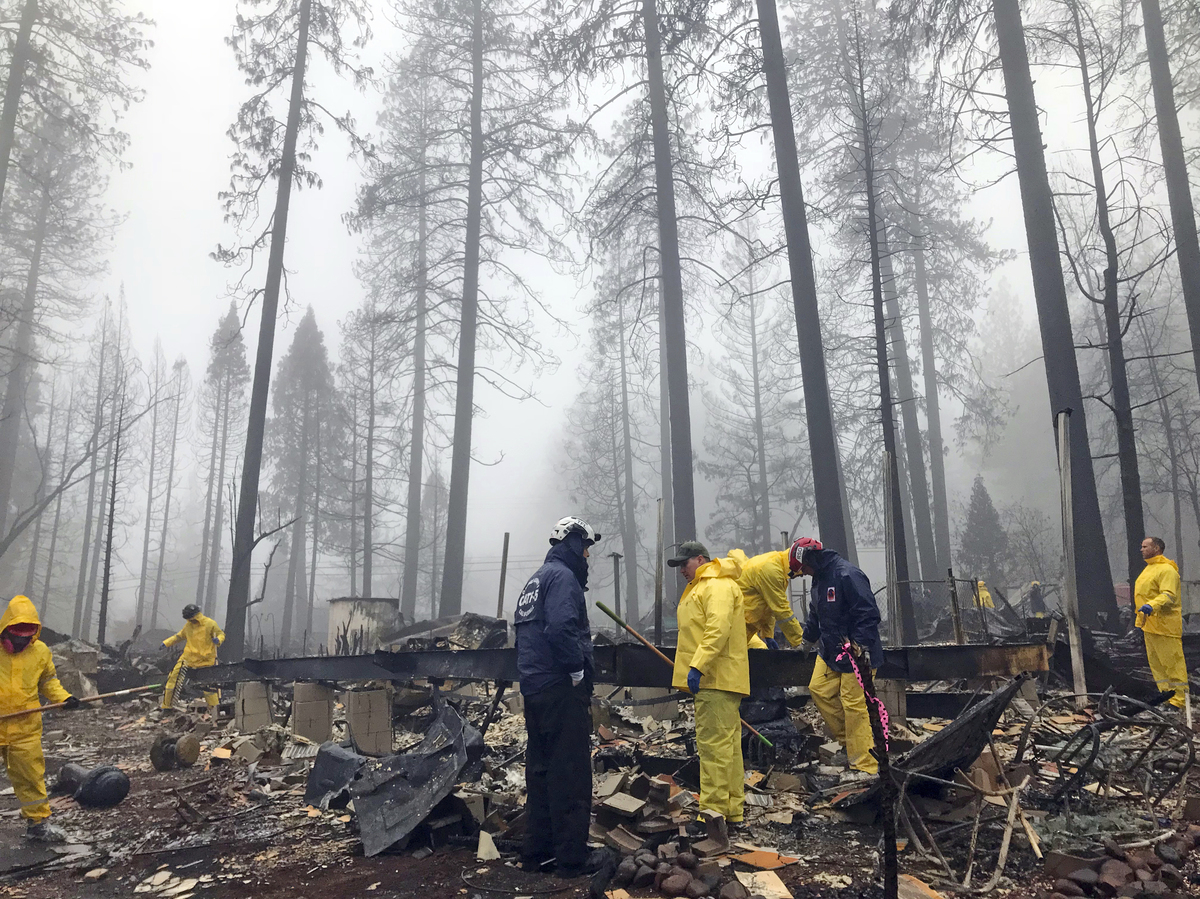 Volunteers search a mobile home park in Paradise, Calif. Government scientists predict wildfires like the one that struck this community will contribute to billions in losses for the U.S. economy.

The Trump administration released a major climate assessment on Black Friday, the culmination of years of research by the country's top climate scientists. It's well over 1,000 pages and touches on a daunting range of topics.

President Trump said Monday that he has read parts of it. "It's fine," he told reporters at the White House, although he said he doesn't believe the report's assessment that climate change will cause devastating economic impacts for the U.S.

The report is required by Congress every four years and is issued by 13 federal agencies and the U.S. Global Change Research Program. This one marks the most detailed and blunt assessment yet of the dangers of unchecked global warming.

"Climate change is happening here and now," co-author Katherine Hayhoe of Texas Tech University told Weekend Edition Saturday. "It is affecting all of us no matter where we live. And the more climate changes, the more serious and even more dangerous the impacts will become."

Here are some key points.

Climate change will be expensive

Some parts of the U.S. economy could suffer hundreds of billions of dollars in annual losses by the end of the century unless global greenhouse gas emissions are substantially reduced, the report finds. Already, there's the impact of increasingly frequent and intense extreme weather events. The report notes that large wildfires are more frequent and that the areas burned by lightning-ignited fires are "expected to increase by at least 30 percent by 2060." The costs for fighting fires and forest management are on the rise (see chart). But there are other, less obvious risks.

Increasing rain and humidity could cause agricultural productivity to fall in the Midwest, and warming oceans will hurt fisheries. Along the coasts, more severe flooding threatens billions of dollars' worth of property and infrastructure, which in turn "could affect the economic stability of local governments, businesses, and the broader economy."

Extreme weather events could also cause price spikes and interrupt international trade. As an example, the report notes that flooding in Thailand in 2011 disrupted production of Ford and Honda vehicles in the U.S. and cost a U.S.-based hard drive manufacturer $199 million in losses.

Again, the rise of extreme events like wildfires, floods and storm surges poses the most immediate danger to public health and well-being. The report finds that with continued warming, heat-related deaths will increase.

The warming climate and more frequent and intense rain might also expand the range of ticks and mosquitoes, exposing more people to diseases like West Nile, dengue fever, chikungunya and Lyme.

Climate change could also worsen harmful ozone levels and air pollution. That could send more people to the hospital for aggravated asthma and respiratory or cardiovascular problems and could even increase premature deaths. As with so many climate impacts, the report notes that those most at risk include children, the elderly and low-income communities.

U.S. infrastructure was not built for these changes

Much of America's infrastructure is already aging and deteriorating, and it is taking a pounding from extreme weather. In some places, more intense rain and saltwater intrusion have led to dam failures, bridge and road closures and power outages. Heavier downpours can also overwhelm sewer systems, causing untreated water to flow into rivers.

In the West, prolonged drought has forced utilities to cut back on electricity production from hydropower. Extreme heat (and higher demand) can also raise the risk of power outages. The report notes that power outages can affect drinking water treatment, among many other services people take for granted. 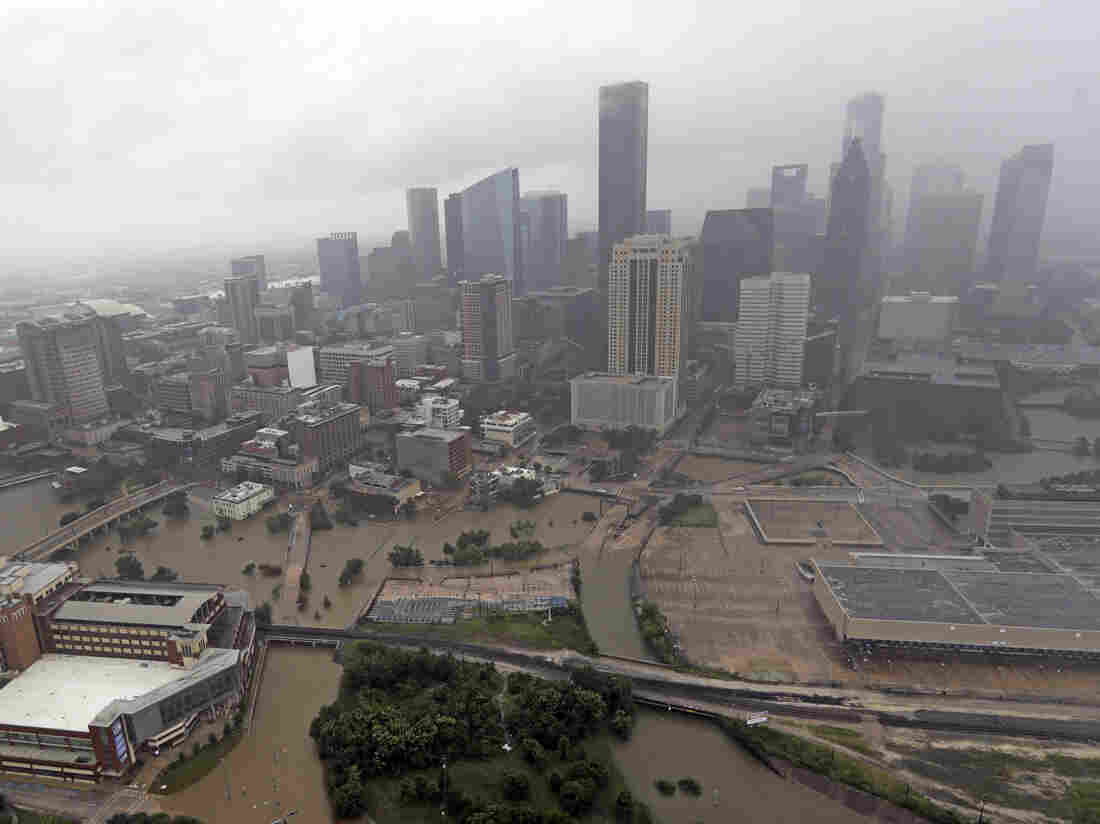 Many highways in Houston were flooded during Hurricane Harvey in 2017. The report finds that U.S. infrastructure is unprepared for climate change. David J. Phillip/AP hide caption 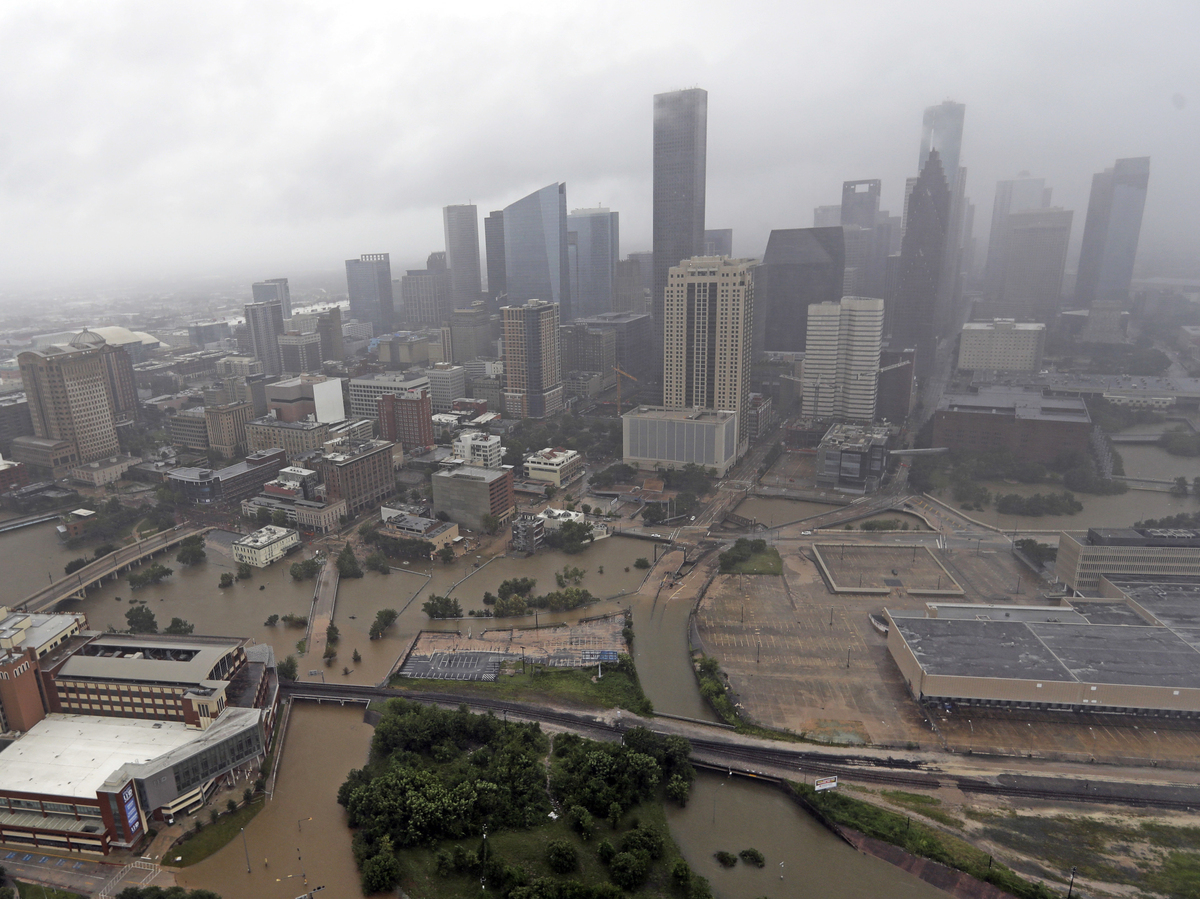 Many highways in Houston were flooded during Hurricane Harvey in 2017. The report finds that U.S. infrastructure is unprepared for climate change.

What's the risk ahead?

The report, like most climate studies, offers different scenarios for how fast the climate will change and by how much. The bigger the change, the greater the consequences for everything from heat waves to hurricanes.

The White House issued a statement criticizing the report as largely based on the "most extreme scenario" for emissions of greenhouse gases. The report is in fact based mostly on two scenarios: One is the most severe view, in which little or no effort is made to lower emissions. However, it also uses a more moderate scenario, one that sees more aggressive actions to reduce emissions than are currently underway — less fossil fuel use, for example, or more efficient vehicles and buildings. And for some of its chapters, the report considers a third, far rosier future where emissions are drastically reduced and even where greenhouse gases are pulled back out of the atmosphere. Effects on people and the economy are considerably less dire under these scenarios than in the most severe one.

Some communities are already adapting

The good news in this dire report is that scores of local and state governments are taking action to lower their own carbon emissions and cope with climate impacts. Some of those impacts will get worse still, no matter what, as they are "locked in due to historical emissions." But the report makes clear that changes today can make a big difference.

"It's absolutely not too late to take action," says Brenda Ekwurzel, a co-author and senior climate scientist at the Union of Concerned Scientists.

The report states that more than half the projected damages of coastal property "are estimated to be avoidable through well-timed adaptation measures." But Ekwurzel cautions that we can't merely adapt our way out of this mess.

"The cost of adaptation could be quite high, and it may never be enough," she says. "But costs will really start skyrocketing if we don't start reining in emissions."