Accessibility links
Bernie Sanders Criticizes Democrats And Republicans In 'Where We Go From Here' The former presidential candidate's latest book is just what you might expect from this genre: His platforms are presented but not interrogated — and there is little self-reflection. 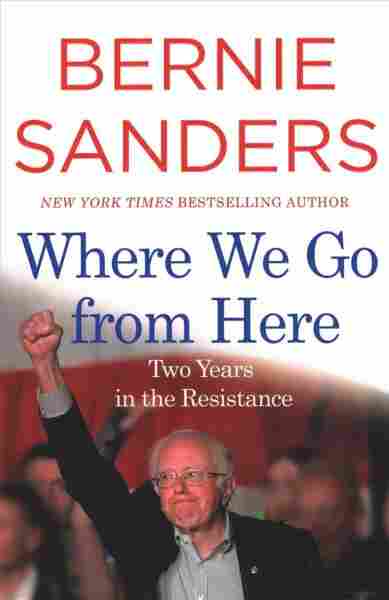 Where We Go from Here

Two Years in the Resistance

Bernie Sanders will not say he is running for president. Instead, he employs a familiar dodge: "The year 2020 remains a long way off."

But Where We Go From Here is unmistakably a campaign book, which means that, like almost all campaign books, it is boring.

Many campaign books are ghostwritten and scraped free of controversy and doubts; these are not books in any meaningful sense of the word, but tools to generate publicity and "Is he or isn't he running?" speculation in the press.

Why anyone would read one of these when they could be reading a book about good-looking British detectives, or ghosts, or rockets, is beyond me. But here we are: 2020 is looming, contenders are ramping up their campaigns, and the season for glossy hardbacks full of declarative sentences, false modesty, and Abraham Lincoln quotes is upon us.

Where We Go From Here is slightly more interesting than most campaign books because Bernie Sanders is slightly more interesting than most candidates for president: He won 13 million votes in the 2016 presidential election as a self-identified democratic socialist, pushing Medicare for all, a higher minimum wage, prison reform, free public universities, campaign finance reform, and ending unnecessary foreign interventions.

"At a time of massive and growing income and wealth inequality," he writes, "as our nation moves closer and closer to an oligarchic form of society, we need an unprecedented grassroots political movement to stand up to the greed of the billionaire class and the politicians they own."

And, the longest serving Independent in Senate history, he is happy to criticize Democrats, whom he sees as ineffective and easily cowed, alongside Republicans, who he sees as morally compromised by their donors.

Chapters are structured like diary entries spaced over the last two years, which he has spent visiting 32 states to advance progressive candidates and position. A standard entry will describe his platform and quote a previous speech at length, with some notes about audience size — he has an almost Trumpian interest in crowd sizes — and then finish with a vague injunction to unity or progress.

One of the book's most striking features is his disdain for what he calls "the corporate media." He is careful to distinguish his criticism from Donald Trump's: "Unlike Trump, I do not believe that the mainstream media is 'fake news' or an 'enemy of the people,'" he writes. "I don't believe that most reporters carry a grudge and intentionally try to destroy politicians. I do believe, however, as I have said many times, that for obvious reasons, multinational conglomerates that own our media are not interested in analyzing the power of big-money interests, or the needs of working families."

For any legitimate outlet, allowing funders to dictate coverage in any way is a huge ethical breach. It's irresponsible of Sanders, who surely knows how media works, to suggest that reporters tweak their stories to please "big-money interests." He also often accuses the media of not covering issues that they cover extensively, from climate change to healthcare to the Koch brothers — Sanders writes that the media has "zero interest in what they stand for," despite the amount of great reporting on their agenda from journalists such as Jane Mayer at The New Yorker.

His disdain, if more nuanced than Trump's, is hardly less self defeating, and at a certain point it begins to feel like what he is actually bothered by is the media's failure to cover his campaign as he would like it to be, rather than as it actually is. He is annoyed, for instance, by a New York Times article that suggested some of his political proteges wouldn't win their primary races. He points to the victory of Alexandria Ocasio-Cortez — whom he did not even endorse in the primary — and sneers, "No doubt the New York Times was disappointed."

Otherwise, Where We Go From Here is just what you might expect. His platforms are presented but not interrogated. There are stances, but few real questions and little self-reflection. But light deception, overblown rhetoric, and the urge to find blame everywhere but in your own campaign are not unique to Sanders: they are hallmarks of this genre.

Sanders often works to counter perceptions that he is an extremist. But whether or not he is a political radical, on the page, Sanders is textbook.