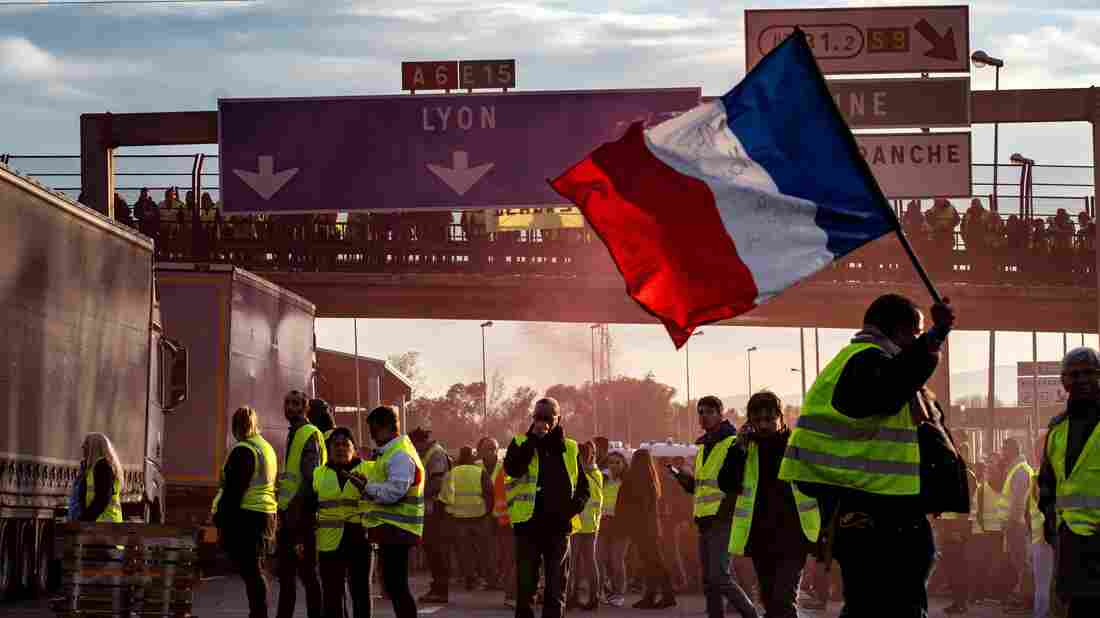 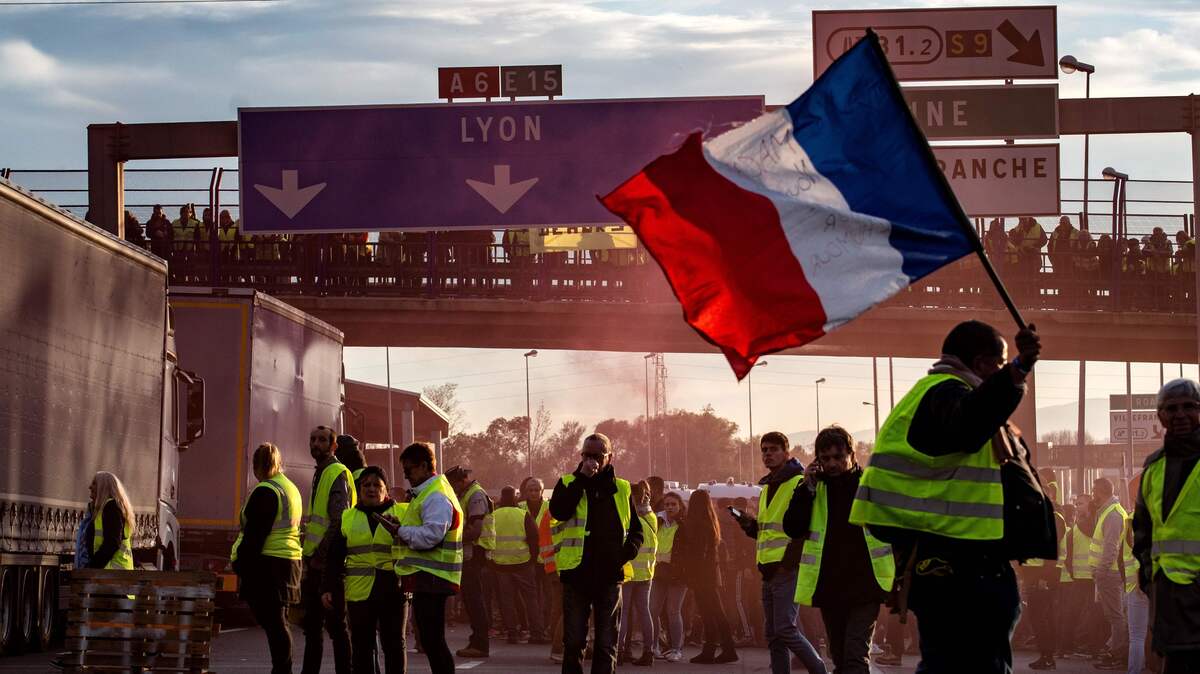 A "Yellow Vest" protester waves a French flag in Villefranche-sur-Saone on Saturday, during a demonstration against high fuel prices.

Despite intensifying grassroots protests, the French government won't be reversing course on a gasoline tax that's designed to help the country transition away from fossil fuels.

In a speech on Tuesday, French President Emmanuel Macron said he sympathizes with the protesters and offered some conciliatory gestures, but stood firm on the tax that prompted the anger.

The "yellow vest" movement, which emerged suddenly this month, is driven primarily by working-class people living outside of France's large cities. France has a strong history of public protests, but the vigor of this movement has been noteworthy.

Hundreds of thousands of protesters have taken to the streets this month to object to the new tax, which will take effect in January. The French already pay some of the highest gas prices in the world.

The protesters wear bright yellow vests — which French drivers are required to keep in their cars, in case of accidents — giving the leaderless, spontaneous movement its name.

"Among its ranks are retirees and the unemployed, farmers, housewives and people who have never protested before," NPR's Eleanor Beardsley reports from Paris. "One newspaper called it the revenge of the diesel class. What unites them is the economic pinch and anger at a president who seems far removed from their daily hardships."

The leaderless movement, not tied to a political party, doesn't have a clear set of demands aside from opposition to the gasoline tax. But the protest movement is speaking to deep-seated concerns and divisions in French society, and the unrest may have been brewing for a while, analysts say.

Demonstrators have set up blockades across roads, blocking other drivers. Two people died. There have been clashes with police: over the weekend, protesters threw bricks and bottles at police, who responded with water cannons and tear gas. 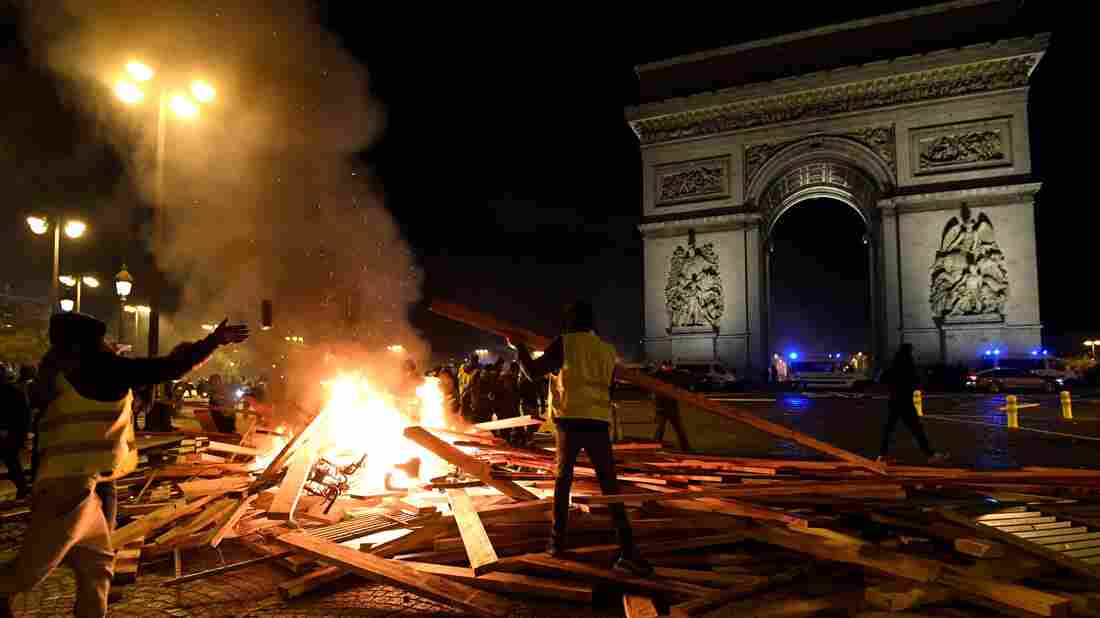 A yellow vest protestor adds to a fire near The Arc de Triomphe in Paris on Saturday, during a rally against a gas tax that will go into effect in January. Bertrand Guay/AFP/Getty Images hide caption 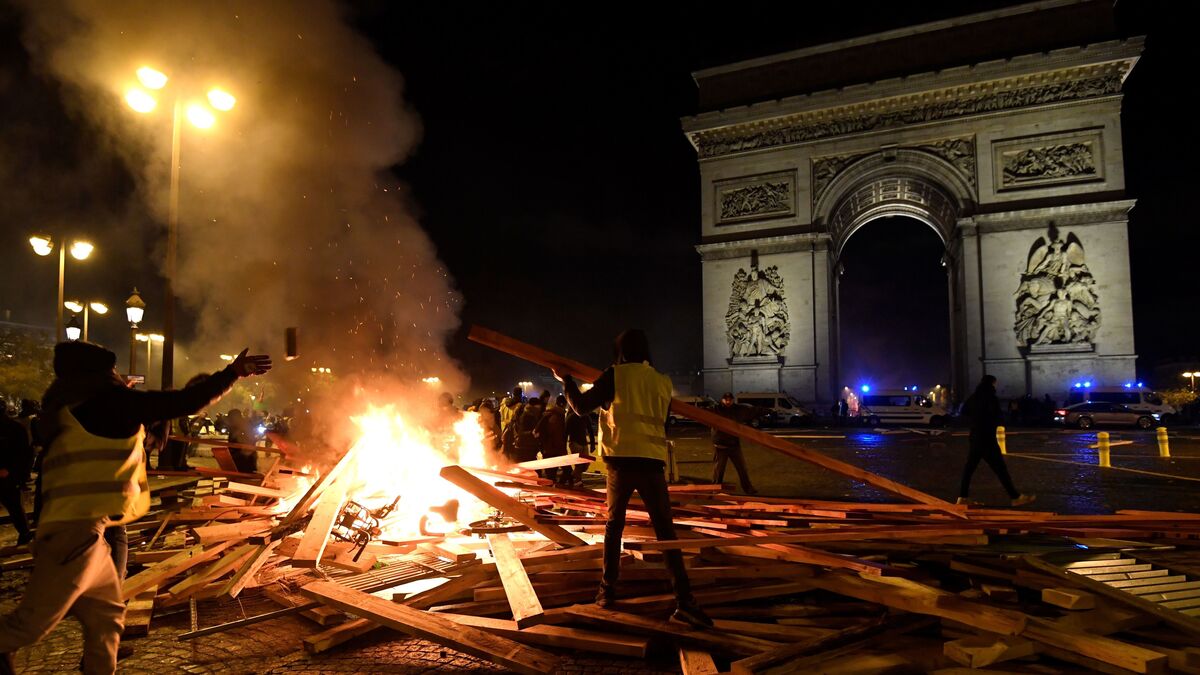 A yellow vest protestor adds to a fire near The Arc de Triomphe in Paris on Saturday, during a rally against a gas tax that will go into effect in January.

A poll found that 77 percent of French people support the "yellow vest" movement.

"There are two Frances: There are the better off people who live in the cities who can afford to think about climate change, and then those living in the rural areas and small towns, a lot of blue collar workers, [who] can't make ends meet," Beardsley says. "And this is where the movement came from. It rose up from the French heartland."

Macron has "successfully faced down unions in his plans to overhaul the french labor market," Beardsley notes. But the yellow vest movement "is posing serious political problems for Macron and his plans to remake France."

Speaking on Tuesday, Macron said that he understood why people were angry, and promised to take steps to help the working class.

But the fuel hike isn't going away, he made clear.

"What I've taken from these last few days is that we shouldn't change course because it is the right one and necessary," he said, according to a translation by The Local.

"Macron did offer a concession, saying he would propose a mechanism to adjust tax hikes when they occurred at the same time as an increase in oil prices internationally — as they have this year," The Local reports.