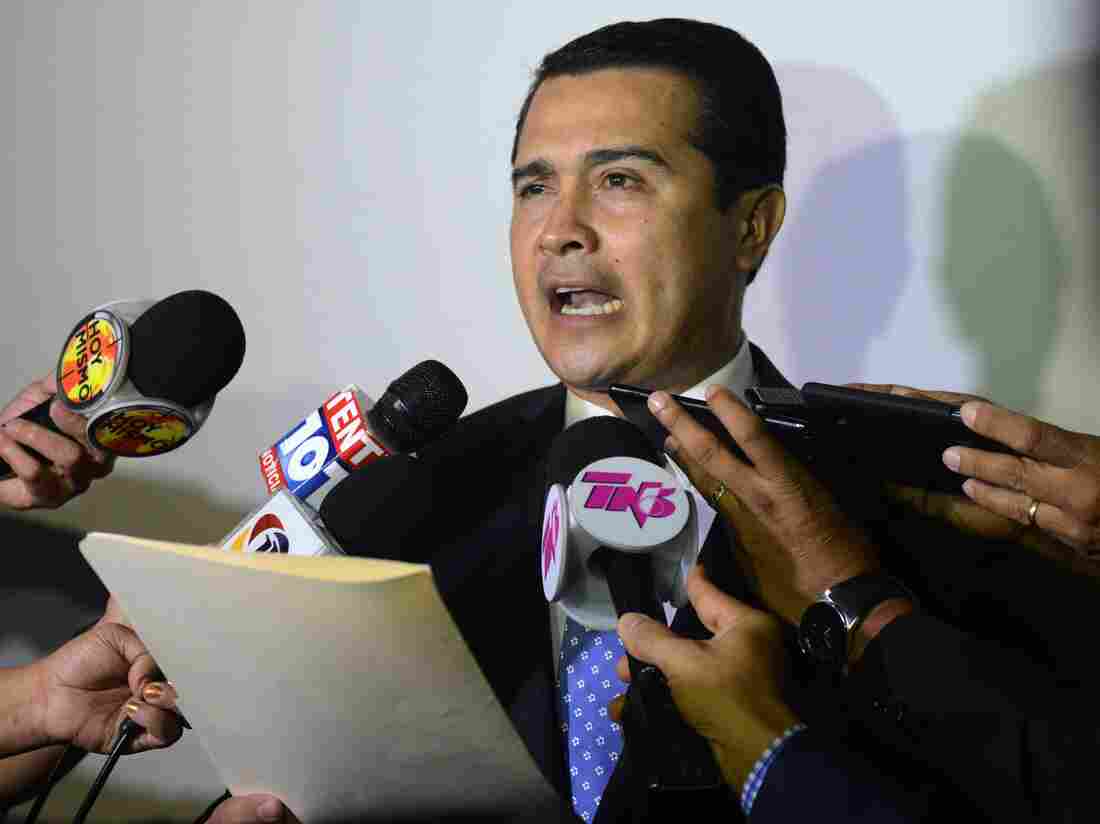 Juan Antonio Hernández, the brother of Honduran President Juan Orlando Hernández and a former congressman, was arrested in Miami on Friday. He is accused of collaborating with multiple criminal organizations in Honduras, Colombia and Mexico to smuggle tons of cocaine into the U.S. Orlanda Sierra/AFP/Getty Images hide caption 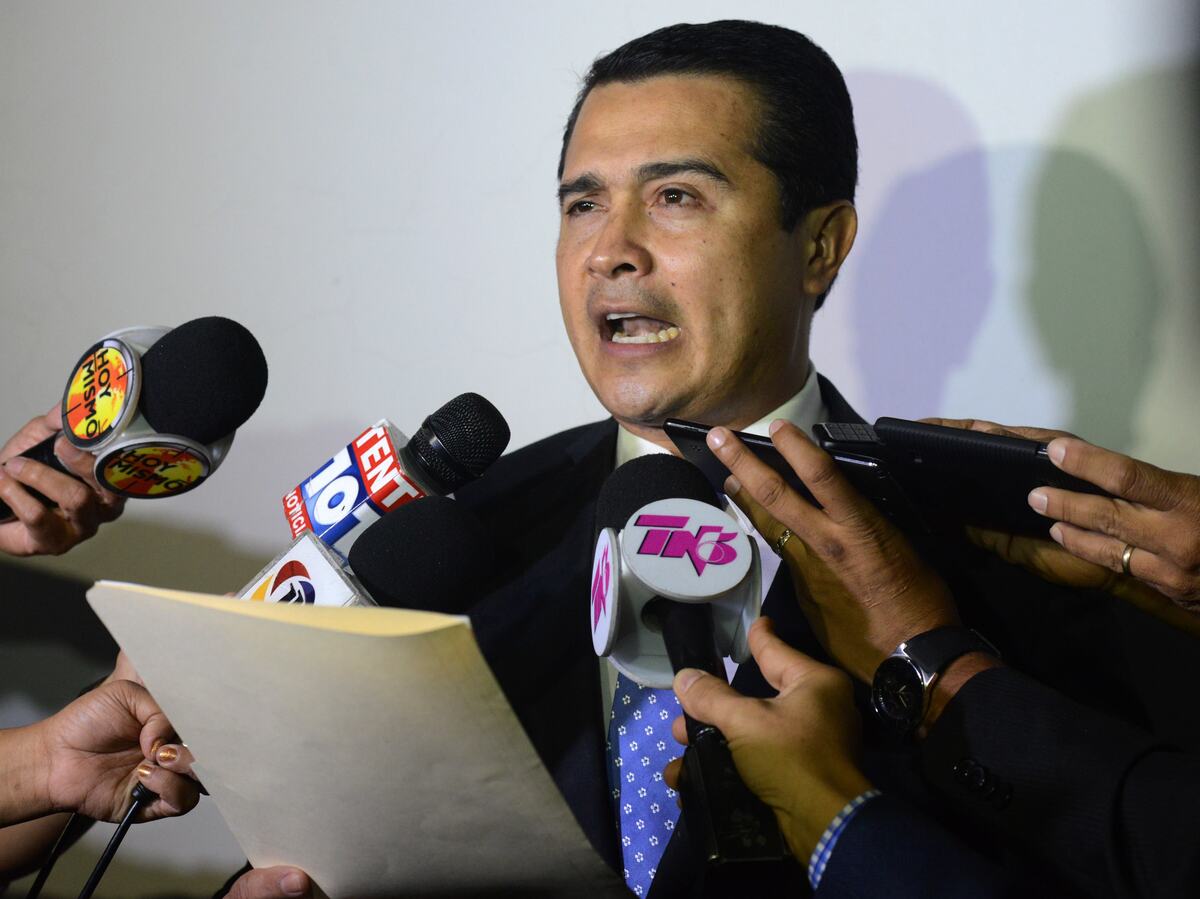 Juan Antonio Hernández, the brother of Honduran President Juan Orlando Hernández and a former congressman, was arrested in Miami on Friday. He is accused of collaborating with multiple criminal organizations in Honduras, Colombia and Mexico to smuggle tons of cocaine into the U.S.

The Honduran president's brother, Juan Antonio Hernández, was arrested on Friday in Miami and charged with the smuggling of tons of cocaine from the Central American country into the U.S., weapons offenses involving the use of machine guns and false statements to federal agents.

U.S. Drug Enforcement Administration officials described the president's younger brother — a former Honduran congressman and lawyer — as a "large-scale drug trafficker" who collaborated with multiple criminal organizations, along with prominent politicians and law enforcement officials in Honduras, Colombia and Mexico.

Hernández, who goes by "Tony," was involved in all stages of the trafficking of multi-ton loads of cocaine that were destined for the United States, Manhattan U.S. Attorney Geoffrey Berman said in statement on Monday, adding that he also "arranged machinegun-toting security for cocaine shipments, bribed law enforcement officials for sensitive information to protect drug shipments, and solicited large bribes from major drug traffickers."

The indictment, filed in the Southern District of New York, alleges that Hernández was so involved in the production of cocaine between 2004 and 2016 that he developed his own brand. The court documents claim Hernández would stamp the letters "TH" for Tony Hernández on cocaine produced in Honduran and Colombian laboratories.

In Honduras, Protests Erupt In Wake Of Presidential Election Results

In Honduras, Protests Erupt In Wake Of Presidential Election Results

"Hernández and his criminal associates allegedly conspired with some of the world's most deadly and dangerous transnational criminal networks in Mexico and Colombia to flood American streets with deadly drugs," said DEA Special Agent in Charge Raymond Donovan, who leads the Special Operations Division.

"This is a heavy blow for the whole family," President Juan Orlando Hernández told reporters following his younger brother's arrest, according to Reuters. "I hope the justice system gives him the room to defend himself, and as a family, we will do what we can to support him."

The New York Times reported President Hernández in a statement "reaffirmed his government's commitment to justice and declared that no one was above the law."

Thousands Of Hondurans Waiting For Word On Special Permission To Stay In U.S.

The charges against the younger Hernández could worsen an already strained relationship between the two governments.

President Trump has issued escalating threats to withdraw foreign aid to the country ever since Honduran migrants seeking asylum began making the arduous journey toward U.S. borders earlier this year. "The United States has strongly informed the President of Honduras that if the large Caravan of people heading to the U.S. is not stopped and brought back to Honduras, no more money or aid will be given to Honduras, effective immediately!" Trump tweeted in October.

The Guardian said the U.S. contributed at least $181 million in aid to Honduras in 2017 "to finance security, anti-drug trafficking and poverty reduction programmes."

Angel Muñoz, one of thousands of migrants currently waiting in Tijuana, Mexico, to apply for asylum told NPR that he joined the caravan after a gang threatened to kill him and his family.

"[Muñoz] drove a taxi in the city San Pedro Sula. Beyond losing at least half his earnings to gang extortion, they wanted Angel to drive around operatives and deliver drugs. He refused, and that brought death threats to the family. They moved to another town, but he says the gang found them again. Leaving was their only option, and the caravan seemed like the best way to do it."

This is not the first time Hernández has been accused of involvement in narcotrafficking. Univision reported that a Honduran army captain was fired last year after he made allegations linking the president's brother to a helicopter that was seized in a drug trafficking raid.

The federal indictment against Hernández charges that sometime in February 2014 he met with Devis Leonel Rivera Maradiaga, the former leader of a violent Honduran drug-trafficking organization known as Los Cachiros. Apparently, video and audio recordings of the encounter show Hernández accepting a payment of approximately $50,000 in exchange for agreeing to act as a bribe collector for Rivera and several Los Cachiros money laundering companies. Their deal was that Hernández would get Honduran government agencies to pay up and take kickback payments from Rivera, according to court documents.

Rivera has been cooperating with the DEA for nearly five years. Since then, he has helped federal prosecutors in Manhattan charge "seven police officers from Honduras's national force, along with the son of the country's former president and several members of a prominent Honduran banking family," The New York Times reported.

If convicted, Hernández could be sentenced to life in prison.