Accessibility links
Review: 'The Favourite' Is Nasty, Brutish and Fun The Extra U Is For Unctuous: Yorgos Lanthimos' latest is a gleefully nasty piece of work about a queen (the spectacular Olivia Colman) and two women (Rachel Weisz and Emma Stone) vying for her favor. 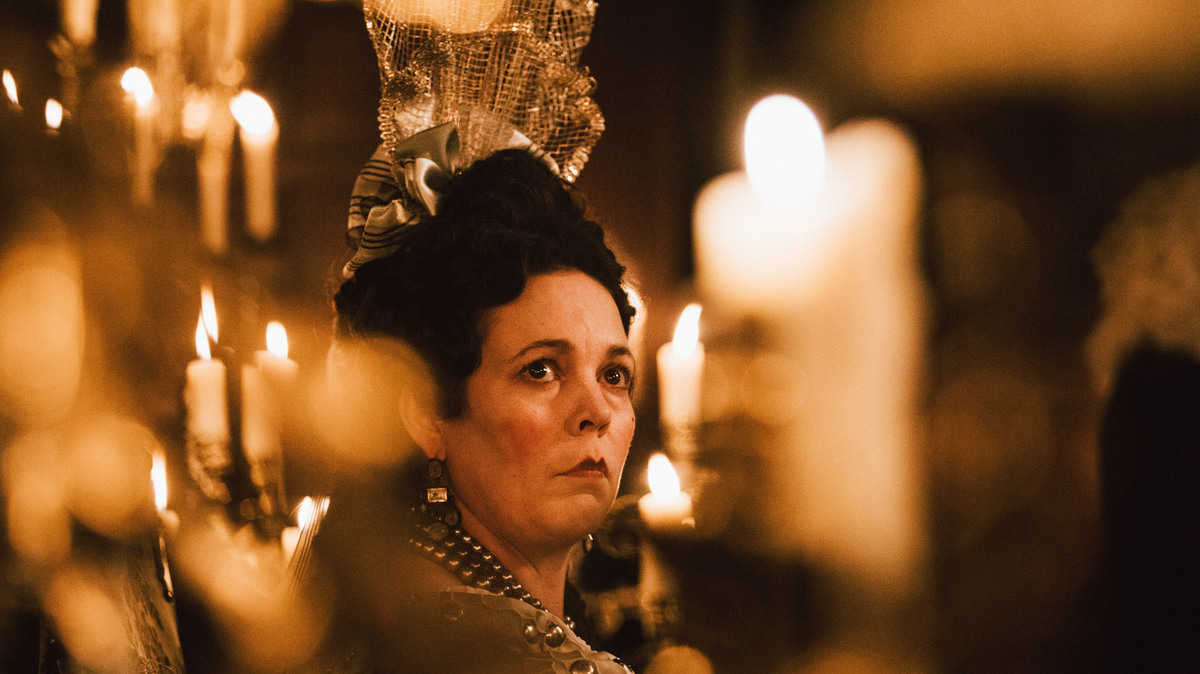 Queen Anne (Olivia Colman) gets Whiggy with it in Yorgos Lanthimos' The Favourite.

And it's not simply the Queen's favor — er, favour — that proves so mercurial. As the film progresses, our sympathies get brutally buffeted about among its three major players: the weak-willed Anne; her sublimely vicious adviser Sarah, Duchess of Marlborough (Rachel Weisz); and the ambitious, wiser-than-she-lets-on servant Abigail (Emma Stone). Weisz and Stone constantly plot and counter-plot against each other as Colman's Anne dithers and waffles and screams at whatever unlucky attendant should happen to enter her field of vision.

At first, Colman makes Anne a downright hateful figure. Having spent her reign infantilized by those around her, she barks willfully childish demands from her bedchamber, throws tantrums, hurls herself into salty spirals of self-pity and too-willingly shunts the affairs of state onto Weisz's Sarah. But Colman's just too damn good to leave it at that; Anne's initial repellent awfulness soon softens into something more pitiable, even empathetic, while her mewling self-pity hardens into a kind of resigned self-awareness — often over the course of a single scene. It's a remarkable performance, at once hilarious and achingly sad.

As Sarah, Rachel Weisz gazes out at the world from behind a fixed, steely, calculating expression, her mouth pressed into a thin reptilian smile that should be registered as a lethal weapon. As she trades waspishly witty barbs with Stone (the screenplay by Deborah Davis and Tony McNamara teems with quotable insults, both veiled and very, very not), what begins as a hairline fracture in her cocksure veneer soon spiders into a crackle finish; she's worried about her station. She has every right to be.

That's because she's watching, in horror, the same thing we're watching: Emma Stone's Abigail shuffling off her plain, humble outer layer to reveal the shrewd and cunning creature of raw ambition that lies beneath. Stone's never been better than she is here, as the character of Abigail threads a perilous needle. The first time we see her, she's literally thrown in the mud. She then proceeds to get dismissed, exploited, abused, and thrown into still more mud — this time at the bottom of a ditch — and if all that weren't enough to win our sympathies, and our sympathetic thirst for vengeance, there's also the small but telling fact that she's played by Emma Freaking Stone, an actress who works with an audience's empathy the way J.M.W. Turner worked with oils. As Abigail learns to play the game of court, we cheer her on — and when she goes further, and further still, and her lip inevitably curls into a sneer, we're still with her, though we should know better.

In films like Dogtooth, The Lobster and The Killing of A Sacred Deer, director Lanthimos established his signature, deadpan aesthetic. His characters didn't so much speak as intone their lines in a flat, affectless monotone which served at first to amuse and fascinate, then ultimately to unsettle, our perceptions. The Favourite forgoes such verbal constraints to freely admit messy human emotions — it's downright awash with them — and the vocal inflections that attend them. The fact that Lanthimos didn't write the script means that the dialogue is sharper and more acidic than usual, favoring the venomous over the vacuous.

Yet this is unmistakably a Lanthimos joint: The world of the film feels both familiar and foreign. Here are all the expected period-drama trappings: wigs and Whigs, Tories and topiaries, bustles and corsets and flounces. But Lanthimos films the action from low angles, to highlight the well-appointed yet oppressive ceilings hanging over everything, and underscores the artifice by employing fish-eye lenses and double-exposure to allow us to see the world through his characters' skewed perceptions. And he doesn't skimp on the vaguely absurdist details: dandies in powdered wigs parade their beloved ducks; a naked man gleefully withstands an odd pomegranate fusillade; a decorous waltz transforms into a kind of antic soul-train line-dance.

That grayed-out quality of light suggests Anne's emotional and physical state: She's fading, and not terribly slowly. Gout and depression are catching up with her, leading to a final shot that's even more arresting, and mysterious, and unforgettable than the uncompromising, charmingly merciless film that preceded it.