Accessibility links
In Praise Of 'Good As Hell,' The Song That Believes In You Even When You Don't Lizzo's self-love anthem works by turning a mirror to the listener. Every moment, from the hair-tossing hook to the rapturous call and response, is about you — the best, most impossible you. 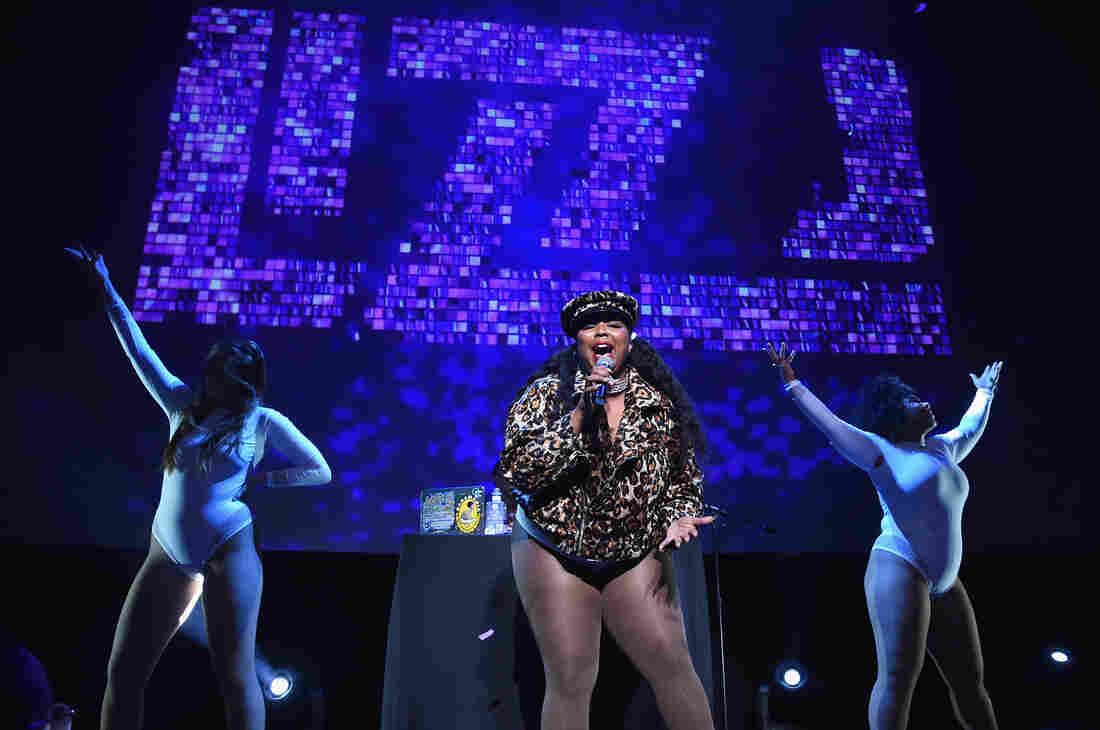 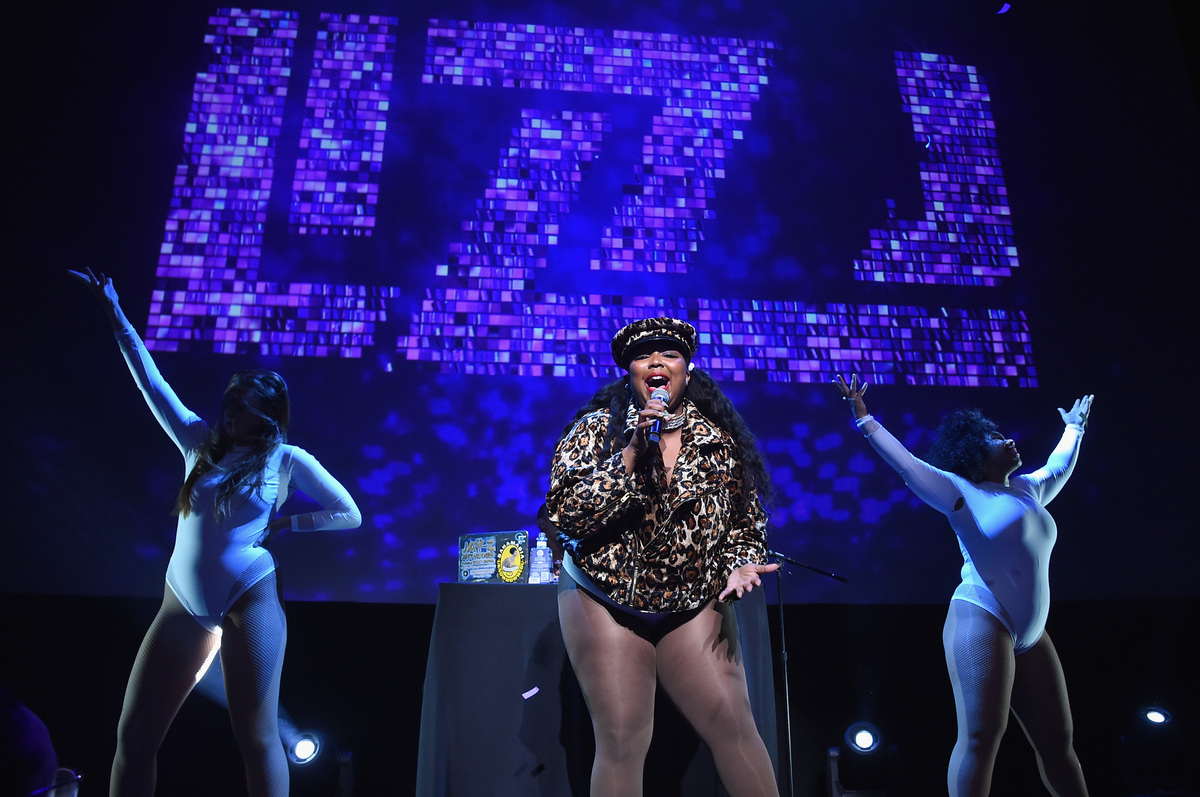 One weekday afternoon last winter, when me and my pal Mia were decidedly not feeling good as hell, we slipped into one of those daytime matinees — the type reserved for people who have awoken feeling like we did and decided to disappear into the dark night of a theater for a few hours in hopes it might hold the madness of the world steady. We saw A Bad Moms Christmas, a comedy sequel about how rapidly people become their parents. At the end of the movie, past the blooper reels and the sentimental clips of the stars as children, as the credits moonwalked up the endless black, a familiar wave of percussion and melody washed over the theater and stopped me in my tracks.

Lizzo's "Good as Hell" was first released in the spring of 2016, ahead of the rapper and singer's stellar EP Coconut Oil. It is the kind of song that crawls into the body, becoming one with all its good joints and best nerves, and by now it has found a life of its own — not only in film but in clubs, jukeboxes, house parties, road trips, RuPaul's Drag Race, anywhere that signifies escape.

Like most great anthems, it is a communal exercise. In place of a hand over her heart, Lizzo opens with, "I do my hair toss." The line will return over and over, eventually shifting into a direct invitation to the listener: "And do your hair toss." Then comes the central thesis, issued in the chorus as a call and response. Marching through the wreckage wrought by shaky self-confidence, Lizzo shouts a question into the void — "Baby, how you feelin'?" — and waits as a choir of voices replies, "Feelin' good as hell."

The choir lives inside the song, but the response is loud enough to echo into the world beyond it: in a car after a breakup or bad date, or in a bedroom with no one but you and the isolation you've built for yourself, reminding you that you are not alone and not invisible. Like the dirt on Jay-Z's shoulder before it, the collective hair toss is a shaking off of weight, emotional or mental, the action that allows a recontextualizing of the self before the night ahead calls to us.

I believe the night to be sacred. I believe it grows more so as a person ages, takes on more responsibilities, loses the freedom to revel with the same devil-may-care energy as in their younger moments. When a night out becomes a rarity, it has to remain sacred, and so the moments that soundtrack it must be sacred.

"Good as Hell" is the rare song that can play at any point in a night out and resonate in each: the getting ready, the going out, the rallying while the hours dwindle, the affirmation in a car home. It is the song that first says, "We're going to do it," and then says, "You are doing it better than anyone ever has," and then, "You did it. Thank you."

It is the saint that comes to you in the mirror when the lighting is bad, or the hair won't move the way you want it to, or when you've tried on all of the outfits and none of them seem right.

The empowerment of women is at the heart of this particular anthem, a fact that deserves not to be erased. The music video is packed with women of color, doing the work of preparing themselves for the world, and then feeling themselves in the most glorious sense. There is looking into a mirror to make sure your s*** is straight, and then there is lingering with the reflection for that extra handful of moments because you know your s*** is straight.

Tucked between the verse and chorus are the lines, "If he don't love you anymore / Just walk your fine ass out the door." It is a conceit that has shown up in American pop music — particularly that made by women — for decades now, the idea of leaving some no-good man who doesn't see the best angles you have to offer.

But there is also a doorway here for anyone to step through a find a room of their own, if one can zoom out and imagine that all kinds of leaving are honored between the song's opening and crescendo — a bad relationship, or a bad job, or a bad meal or, even if just for a moment, a bad world. Without erasing the unique specifics of the song's message, there is another message rattling below: Anyone who desires wings can go out and get them.

Bring me your people who work two jobs during the week just to have spending money on Saturday. Bring me your brokenhearted — the ones who know their relationship is careening towards doom but still wake up searching for a reason to stay, and the ones who know they won't find that reason and have given up looking. Bring me the people who were shy in college but grew into their endless potential while everyone else grew old and boring. Bring me the parents who have stashed their children with someone else for a few hours, and bring me the children who have snuck past their sleeping parents. There is a night yawning wide, begging for you to run into it.

"Good as Hell" is the anthem of both the night itself and of life in preparation for it: the saint that comes to you in the mirror when the lighting is bad, or the hair won't move the way you want it to, or when you've tried on all of the outfits and none of them seem right. "Walk your fine ass out the door" isn't just about ending a romance gone awry. It is permission to exit from whatever version of yourself doesn't believe in the other you: the best, most impossible you.

Bigger Than Disco, 'You Make Me Feel (Mighty Real)' Is A Celebration Of Self

These days, movies are the night I run into. When I look at the news lately, or even catch a glimpse of a television while walking through an airport, I sometimes mumble "This is hell" to myself, because I have become less reluctant in my pessimism. I say "This is hell" and I mean I am watching bad people revel in their misdeeds, while less powerful people pay the consequences. I go to movies because I need an escape from a world where, for many of us, there are people waiting around every corner to shame, or minimize, or marginalize.

A few months after A Bad Moms Christmas, I dragged myself to I Feel Pretty for a friend's birthday. I sat alone in a showing of Blockers during another week when I'd watched too much news and felt perhaps hell, but no goodness, flowing from it. Both times, "Good as Hell" was there at the film's ending, ushering the story to a close. When you have already escaped, re-entering the world is the hard part. It is nice to have a song throw its arms around your shoulders and push you, gently, back into what you ran from.

Hanif Abdurraqib is a writer and poet from Columbus, Ohio. His latest books are They Can't Kill Us Until They Kill Us and the forthcoming Go Ahead in the Rain: Notes to A Tribe Called Quest.