Accessibility links
If Pelosi Returns As Speaker, So Would The GOP Playbook Against Her Tying Democrats to Nancy Pelosi did not stop a blue wave in 2018, but many Republicans say she's still a "toxic" figure whom they could use against her party in 2020 if Speaker Pelosi returns. 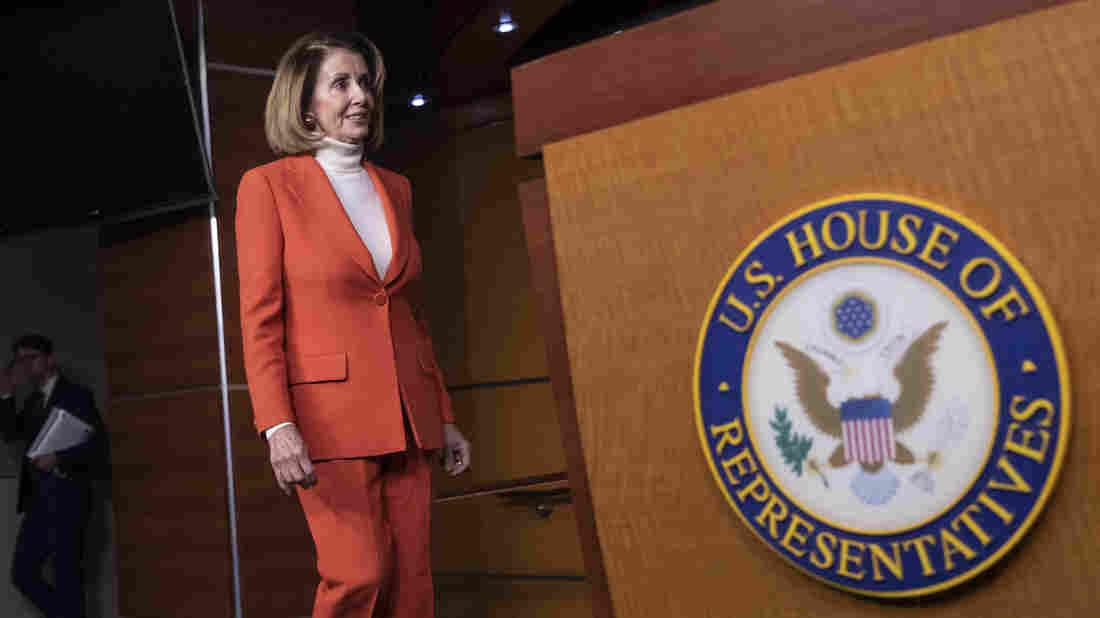 House Minority Leader Nancy Pelosi, D-Calif., arrives for a news conference earlier this month. Many Democrats who distanced themselves from Pelosi in the midterms are coming around to voting for her for speaker again. J. Scott Applewhite/AP hide caption 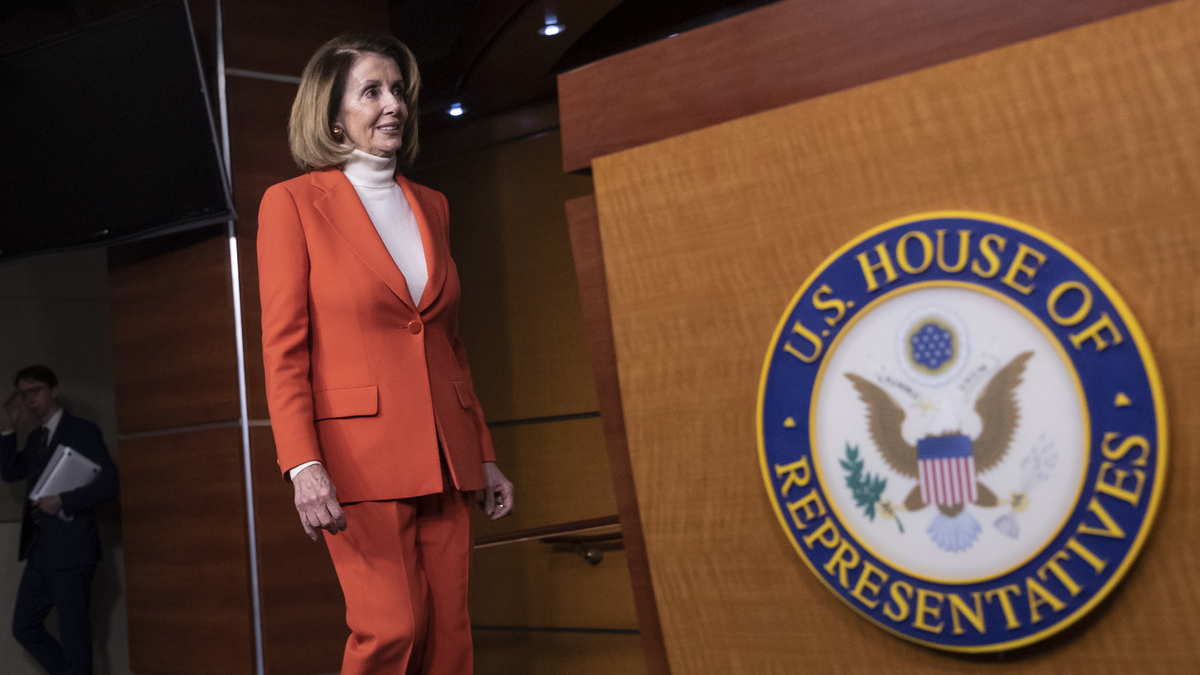 House Minority Leader Nancy Pelosi, D-Calif., arrives for a news conference earlier this month. Many Democrats who distanced themselves from Pelosi in the midterms are coming around to voting for her for speaker again.

For nearly a decade, Nancy Pelosi was the GOP's not-so-secret weapon.

Tying a congressional candidate to the Democratic leader and raising the specter of another would-be speakership was a Republican's silver bullet for much of the past decade.

But in 2018, that strategy failed — badly. Democrats flipped control of the House and are on pace to pick up as many as 40 seats with their biggest popular-vote margin since the Watergate scandal, and Pelosi is hoping to become speaker of the House again as her fellow Democrats take a first vote Wednesday.

In part, Republicans say Democrats successfully distanced themselves enough from Pelosi in 2018 to convince voters of their independence. But with many of them coming around to voting for her for speaker again, don't count on the Pelosi strategy among the GOP to go away any time soon.

"I still think she's a toxic figure and and an unpopular figure to definitely tie Democrats to," said GOP strategist Andrea Bozek, a former communications director at the National Republican Congressional Committee. "That's why you had a lot of Democrat incumbents and candidates during the campaign say that they weren't going to vote for her, which is sort of unprecedented."

Pelosi has once again shown her political prowess in wooing even skeptical lawmakers and wavering freshmen to her side. A formal vote for speaker won't be held until January, but enough possible defections have now petered out that it looks as if the California Democrat will claim the gavel again.

On Tuesday, a group of 20 freshmen — including some who were lukewarm about her on the campaign trail — released a letter explaining their rationale for backing the 78-year-old Pelosi now.

"The incoming class of first-term members is younger and more diverse than ever before. A proven leader like Leader Pelosi will be a valuable resource as we, ourselves, step up to lead, and as we work to make life better for the people we represent," the letter reads.

One of those signatories, Rep.-elect Angie Craig of Minnesota, admitted that she campaigned saying she would consider new leadership but said Tuesday during a panel discussion on bipartisanship that "you can't beat something with nothing" and that she was supporting Pelosi after meeting with her and talking about taking action on several issues she stressed during her campaign.

Other possible Pelosi challengers also backed down. Ohio Rep. Marcia Fudge was a possible alternative, but she announced last week that she would support Pelosi after squeezing concessions from the leader and being granted a position leading a revived panel on election administration. New York Rep. Brian Higgins, who had earlier signed an anti-Pelosi letter, also reversed course.

According to a list by NBC News, there were at least 58 incumbents or candidates during the cycle who said they either wouldn't support Pelosi or had signaled they were open to new leadership, far more than the number that would be required to block her path if they all opposed her.

Rep.-elect Lauren Underwood of Illinois was one of those on the fence. But she also said Tuesday that she eventually realized that people in Washington were focused on Pelosi but said flatly "people at home don't care."

Underwood said she was asked by reporters regularly during the campaign about Pelosi but argued "we are missing so much" of the other issues that voters care about with the intense focus on the Democratic leadership race.

Democratic strategists say their winning strategy in 2018 proved that Pelosi isn't the motivating factor she once was for that very reason, with their more issue-focused ads on things like health care and entitlements showing voters want solutions and not just rhetoric about who will be in leadership.

"This is an old, tired playbook they've really been trying since dating back to 2006," said Democratic consultant and ad-maker John Lapp. "Republicans ran it in districts across the country, and it really fell flat in some ways, and in some ways, I would say it backfired."

Republicans have long tried to use the San Francisco lawmaker as the embodiment of the ideals that Republicans knew were anathema to much of middle America — a liberal, coastal elite whom they could paint as wanting to raise taxes and inflate the deficit.

Some Democrats argue that the way Republicans tried to use Pelosi as a political weapon this year was especially tone-deaf, as white women in suburban districts revolted from the GOP.

"There's a huge element of sexism here. Usually [Pelosi] looks like she's screeching or yelling and has an angry face in all of these ads. It's sort of symbolic of women's power in workplace and women's leadership, but for some voters, that is threatening," said Democratic pollster Anna Greenberg. "Suburban, professional, well-educated women are very, very supportive of women in leadership, and Pelosi is very popular among them."

There were signs even before Election Day that there were cracks in the GOP's strategy. An internal Republican poll obtained by Bloomberg News in September showed that voters were more likely to back a Pelosi-aligned candidate that once endorsed by President Trump by 5 points.

Republican groups still ran ads wielding Pelosi in some of the races that Greenberg worked on this past cycle, including Democrat Lizzie Pannill Fletcher's victory over Texas GOP Rep. John Culberson.

Greenberg said she ultimately never saw the numbers move that much after such an attack. However, other Republicans privately say that if they did not try to use Pelosi again in some races and make her a villain nationally, they could have lost even more seats.

Fletcher was another incoming freshman who signaled during the campaign that she wouldn't necessarily support Pelosi as speaker. But she is among those who have since come around and say they will back the California congresswoman for the position — something even Republicans give Pelosi credit for as evidence of her political skills and negotiating prowess.

Other Republicans admit the reason making Pelosi a boogeyman didn't work this year is simple: Democrats had a bigger one this time around.

"It begins and ends with Trump," said GOP strategist Doug Heye. "Pelosi does motivate Republican base voters. But clearly Democrats had a whole lot more they were motivated about than Republicans."

Heye was communications director at the Republican National Committee in 2010 when the Affordable Care Act passed while Speaker Pelosi led the Democratic House majority, and he helped lead the GOP's "Fire Pelosi" initiative that would ultimately be successful in that year's midterm elections as Republicans were swept into power. But as Heye explained last week in a Daily Beast op-ed, there was one clear reason Republicans were so focused on getting rid of Pelosi.

"Nancy Pelosi, we believed, had to go precisely because she was so effective. Had Speaker Pelosi not been able to get Obamacare through, our campaign had no rationale," Heye wrote.

Freshmen like Fletcher and Underwood who remained uncommitted to voting for Pelosi, or some who remain outright opposed to her, did somewhat inoculate themselves from political attacks. Republicans say that in a March special election around Pittsburgh, in which Democrat Conor Lamb was able to flip a GOP-held seat, the moderate Democrat provided a playbook for distancing himself from his party's leader that others were able to replicate.

And on a micro level, perhaps the Pelosi strategy did work. Republicans credit it with helping them save another special election last year in Georgia's 6th District. But when things go macro, it's harder to stop the bleeding. After all, that same district in the Atlanta suburbs fell into Democratic hands in the midterms.

Even with less-than-stellar results this year by doubling down on Pelosi, not all Republicans are ready to abandon that strategy in the future. And with freshmen in swing seats reversing course and backing Pelosi, Republicans are eager to get that footage of them casting their voice vote for speaker in January that can be used against them.

Democrats opposed to Pelosi also argue she's putting these new members in a tough spot on their first vote in Congress.

Some in the GOP point out that, with Democrats partially controlling one branch of government, a Speaker Pelosi could actually help Trump, with his easily making her a scapegoat in a way that voters might believe easier now that Democrats have some power back.

And if he can build her into even more of a drag, don't be surprised if Republicans revive their Pelosi strategy again in 2020.