Accessibility links
Authorities Describe 'Confusion And Chaos' At Borderline Bar Shooting In California The FBI says they've found no evidence of "radicalization" of the shooter, Ian David Long, at the mass shooting at the Borderline Bar and Grill in Thousand Oaks, Calif., earlier this month. 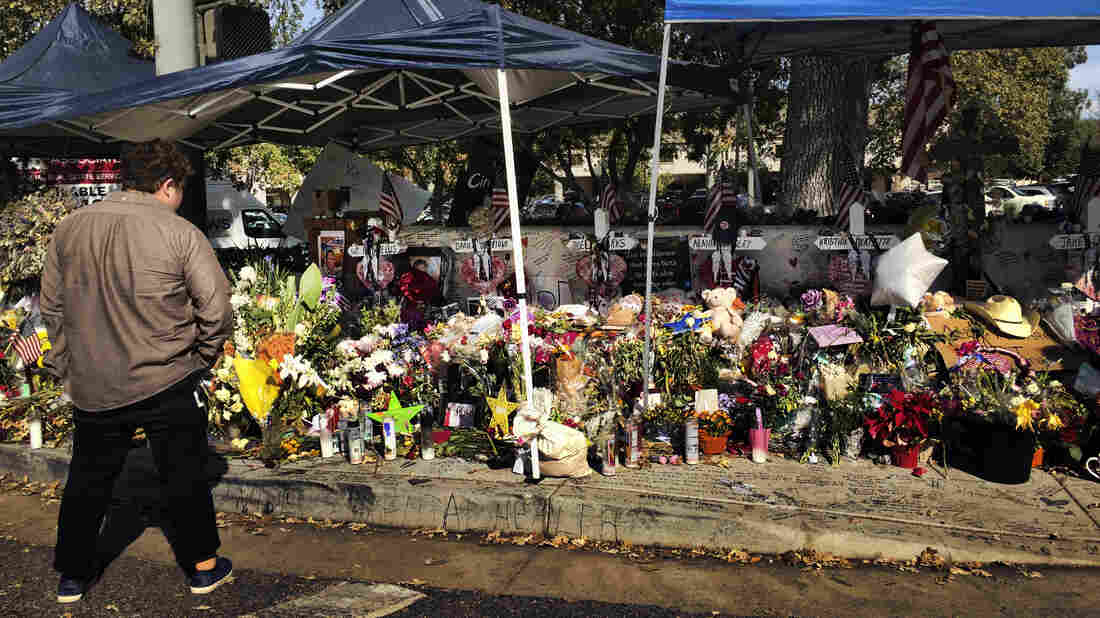 A passerby stops to look over a street side memorial to the shooting victims of the Borderline Bar in Thousand Oaks, Calif., on Tuesday. Investigators said the number of victims from the shooting at the country music bar could have been much higher based on the amount of ammunition the gunman carried. Amanda Lee Myers/AP hide caption 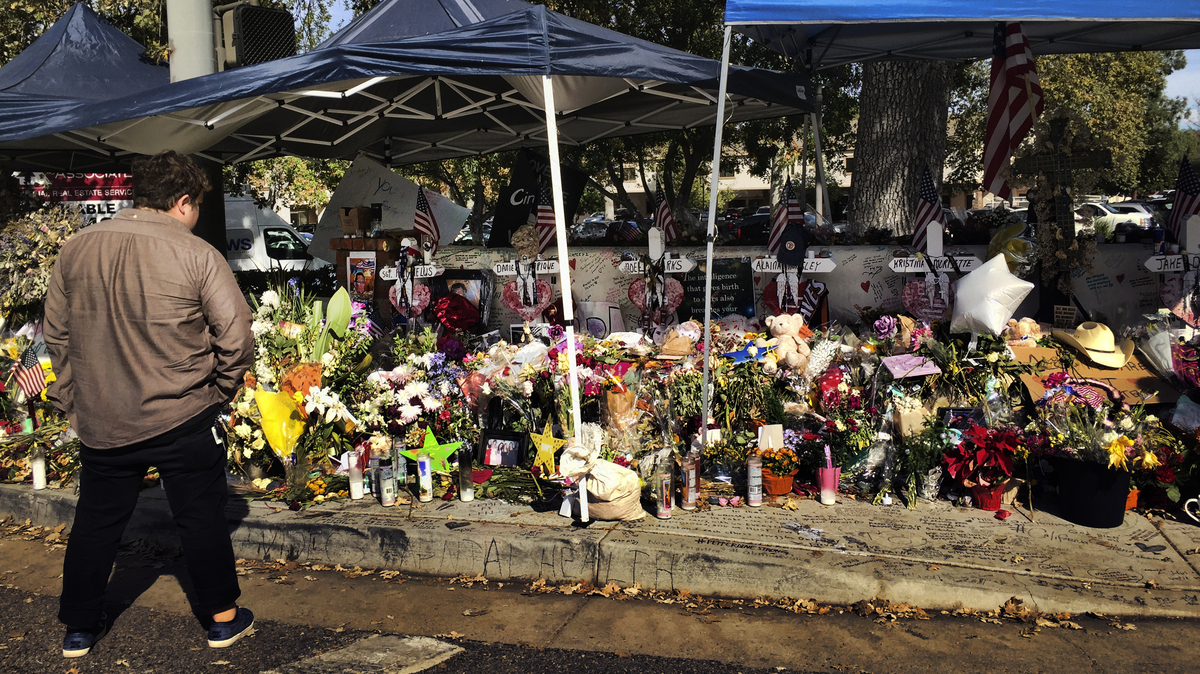 A passerby stops to look over a street side memorial to the shooting victims of the Borderline Bar in Thousand Oaks, Calif., on Tuesday. Investigators said the number of victims from the shooting at the country music bar could have been much higher based on the amount of ammunition the gunman carried.

"Confusion and chaos" was how Ventura County Sheriff Bill Ayub described the immediate aftermath of the mass shooting at the Borderline Bar and Grill on November 7. Much is still unknown, including the motives of the shooter, Ian David Long. But, on Tuesday, the Sheriff and other public officials were able to divulge a few more details about their investigation.

Wednesday, Nov. 7 was college night at the Borderline, a time when young people not yet old enough to drink were welcomed for some hanging out and line dancing.

Long fired more than 50 rounds into the crowd, killing 12 and wounding 1 before taking his own life.

He used a .45 caliber Glock semi-automatic pistol that he purchased legally at a gun shop in nearby Simi Valley a couple of years ago. He'd attached a flashlight with a laser sight. Long did not have a concealed carry permit.

Investigators also recovered 7 high capacity 30-round magazines at the scene. Those are illegal in California, but can be purchased in neighboring states. No other weapons were found at the crime scene or at his home.

Ayub said that, after firing on bar patrons and setting off smoke bombs, Long took a defensive position, anticipating the arrival of law enforcement. Sgt. Ron Helus and a California Highway Patrol officer entered the bar within minutes. "The suspect ambushed the officers almost immediately from a position of tactical advantage," said Ayub. Both officers returned fire, but did not hit the gunman. Helus was shot and killed.

Ayub sent a SWAT team and crisis negotiator to the Borderline and says that his department was planning for a "barricaded suspect situation." After Long took his own life, deputies entered the bar to find more than a dozen patrons hiding in the attic and other locations in the building.

Some patrons who had escaped had fled to a nearby bar and, there was confusion because deputies at first thought there could be two crime scenes. They also got differing descriptions of the gunman from witnesses and thought there might be more than one shooter. "It's not that the witnesses were wrong," said Ayub. "Each person had a different perspective of what they saw and heard."

During the first eight days following the shooting, there were 80 to 90 FBI agents on the scene. They participated in recovering evidence and victims from the crime scene. They also assisted sheriff's deputies in conducting hundreds of interviews of victims, witnesses and people who may have known the gunman. Paul Delacourt, the FBI's assistant director in charge of the Los Angeles Field office, said there's been no indication of any "radicalization" and that they continue to look for a motive.

Physical evidence from the crime scene and the gunman's home has been sent to the FBI's crime lab in Quantico, Va. Delacourt said that the Bureau is also preparing a shooting reconstruction report which will "take some time" to complete.

So the investigation into the Borderline shooting continues. Ayub said that "any information we share publicly through the media, will first be shared with the families of the victims."