Accessibility links
Trump: Manafort Pardon Not Off The Table After Briefings From Manafort's Lawyer The president told the New York Post that although a pardon for his former campaign chairman hasn't been "discussed," he won't close the door to short-circuiting punishment for Manafort. 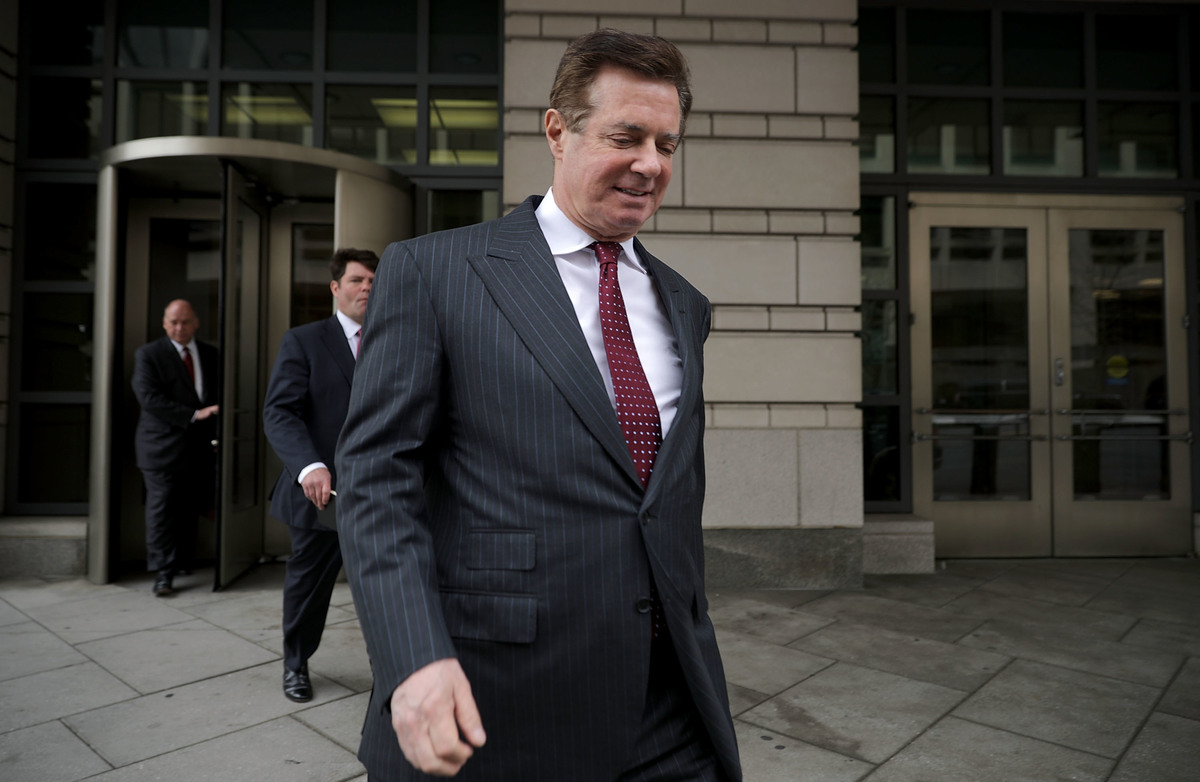 A pardon for ex-campaign chairman Paul Manafort is not "off the table," President Trump said Wednesday, following a report that Manafort's lawyer has briefed Trump's lawyers about his testimony in the Russia investigation.

Trump told the New York Post that he hasn't talked about clemency for Manafort but that the door remains open.

Trump's interview followed a report late Tuesday in The New York Times that Manafort's attorney has been briefing Trump's lawyers about what Manafort has been telling investigators with Justice Department special counsel Robert Mueller's office.

Those briefings are "highly unusual" but not illegal, the Times reported, and they've enabled the president's legal team to get a look inside the work of the special counsel's office, which has helped Trump's lawyers craft their defense and public relations strategies.

Critics pounced on what they called a transparent offer by Trump to reward efforts to keep facts from the Justice Department investigators.

This would be a blatant and unacceptable abuse of power. The pardon power is not the President’s personal tool for protecting himself and his friends. https://t.co/sM5UnUmOnW

Trump's interview with the New York Post continued the intensification of his months-long attacks on attacks on the Justice Department with a new charge that Mueller is trying to induce witnesses to lie.

An earlier tweet on the president's thread cited the latest turns in the saga as further evidence for his argument that Mueller has run amok and that his office is simply cooking up a case against Trump.

While the disgusting Fake News is doing everything within their power not to report it that way, at least 3 major players are intimating that the Angry Mueller Gang of Dems is viciously telling witnesses to lie about facts & they will get relief. This is our Joseph McCarthy Era!

Trump's account then reposted a tweet from another account featuring a meme that asked: "Now that Russia collusion is a proven lie, when do the trials for treason begin?"

The "collusion" question remains open, pending the outcome of the investigation.

The special counsel's office did not comment on the developments this week.

The tweet's allusion to "at least 3 major players" referred to the recent news accounts about the interactions of key witnesses with investigators; Trump told the Post he was talking about Manafort, conservative commentator Jerome Corsi, and political consultant Roger Stone.

The Times and Post stories appeared after Mueller's office notified a federal court on Monday that Manafort had lied during his interviews since his plea deal, which the office said voided the agreement.

So the special counsel's office asked a judge in the case to sentence Manafort as soon as possible without any consideration for his cooperation.

Federal Judge Amy Berman Jackson scheduled a conference in Manafort's case for Friday that could establish when he will be sentenced.

"The government will file a detailed sentencing submission ... in advance of sentencing that sets forth the nature of the defendant's crimes and lies, including those after signing the plea agreement," Mueller's attorneys said in their earlier court filing.

Manafort is not expected to appear for the conference on Friday; he waived his right to attend in a filing on Wednesday.

Who knew what about the meeting

The Times report suggested Mueller's office asked Manafort to affirm that Trump was aware of the much-dissected meeting in June 2016 involving a delegation of Russians and Manafort, Trump's son and Trump's son-in-law.

If Trump authorized that meeting or simply knew about it beforehand, that would be important evidence in the investigation into whether anyone in his campaign conspired with the Russian attack on the election.

Trump has denied knowing anything at the time about the meeting or, more broadly, about Russia's campaign of active measures.

Dems: The Acting Attorney General Can't Continue In His Job. DOJ: Yes, He Can

He and Donald Trump Jr. have acknowledged the conference was aimed at getting political dirt on Hillary Clinton, but they have said that that's common in politics and that they didn't use the information they received.

Trump's post on Twitter and his interview with the New York Post suggested that when Manafort, in this construction, didn't agree to lie and tell prosecutors that Trump was aware of the meeting beforehand, the government opted to punish him by spiking his plea deal.

It isn't clear what statements prompted the government to rescind the deal with Manafort; prosecutors wrote in their court filing that he "committed federal crimes by lying to [the FBI] and the special counsel's office on a variety of subject matters."

The Russia Investigations: Trump Says His Answers For Mueller Are Done. Now What?

Mueller's office has concluded several guilty pleas with people in the Russia case predicated upon false statements; in other examples, it has said in court documents that it had evidence that contravened statements made by people who were interviewed.

Trump, meanwhile, has said he believed the questions he answered in writing from Mueller were "tricked up," i.e., designed to entrap him, and his Twitter post on Wednesday alluded to similar statements by others in the case.

Trump said in his answers that Stone did not tell him about WikiLeaks and that he did not learn about the Trump Tower meeting beforehand, according to a report by CNN on Wednesday.

The other "major players"

Corsi is a conservative commentator for InfoWars who has been negotiating his own plea agreement with Mueller. Stone is the longtime political consultant who has said he expects to be indicted in the Russia case but maintains he did nothing wrong.

Corsi has told news organizations that he walked away from a potential guilty plea that would have been based on his statements about his connection to Stone and Stone's alleged links to WikiLeaks.

WikiLeaks released a blizzard of stolen documents in 2016, including emails, that embarrassed targets in the United States including the then-chairwoman of the Democratic National Committee and the chairman of Clinton's campaign.

Prosecutors say WikiLeaks and its boss, Julian Assange, got the material from Russia's military intelligence agency, the GRU, making it a key plank in its campaign of influence against the U.S.

Sealed charging documents against Assange may be on file in the Eastern District of Virginia; the Justice Department declines to confirm or deny what it has in store there.

Stone and Corsi deny they had any inside line to Assange in 2016; they say when they talked among themselves and, in Stone's case, with Trump's campaign bosses, they were just puffing themselves up with information that was already public from Assange's public comments.