Accessibility links
FACT CHECK: Trump's Claims About 'Record Clean' U.S. Air The president says the U.S. environment is better than it has been in years. But data from various sources paint a more complicated picture. 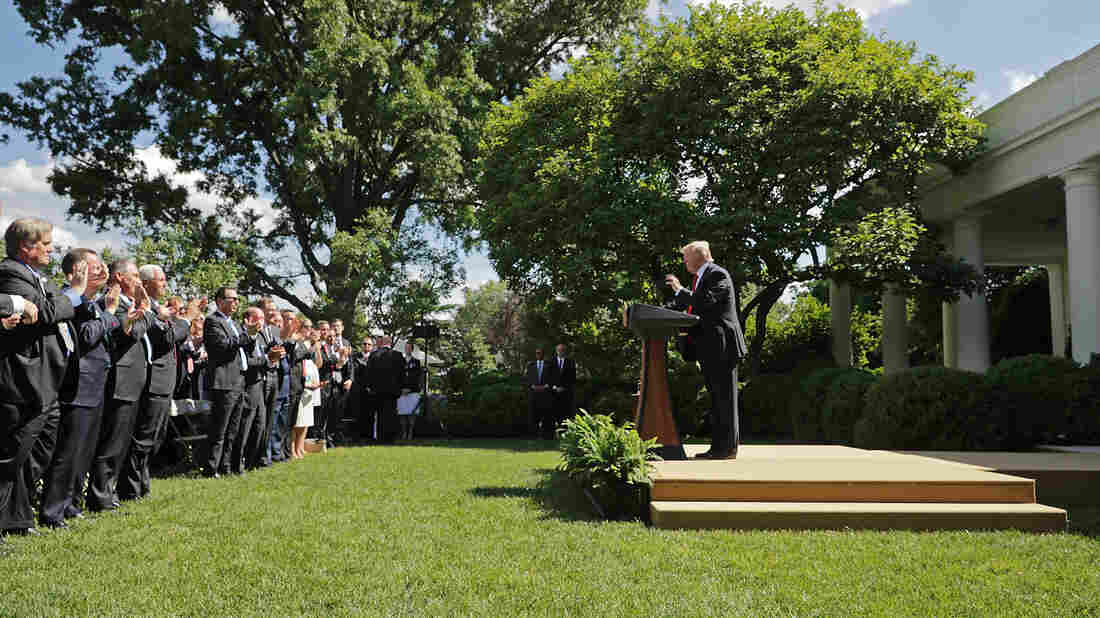 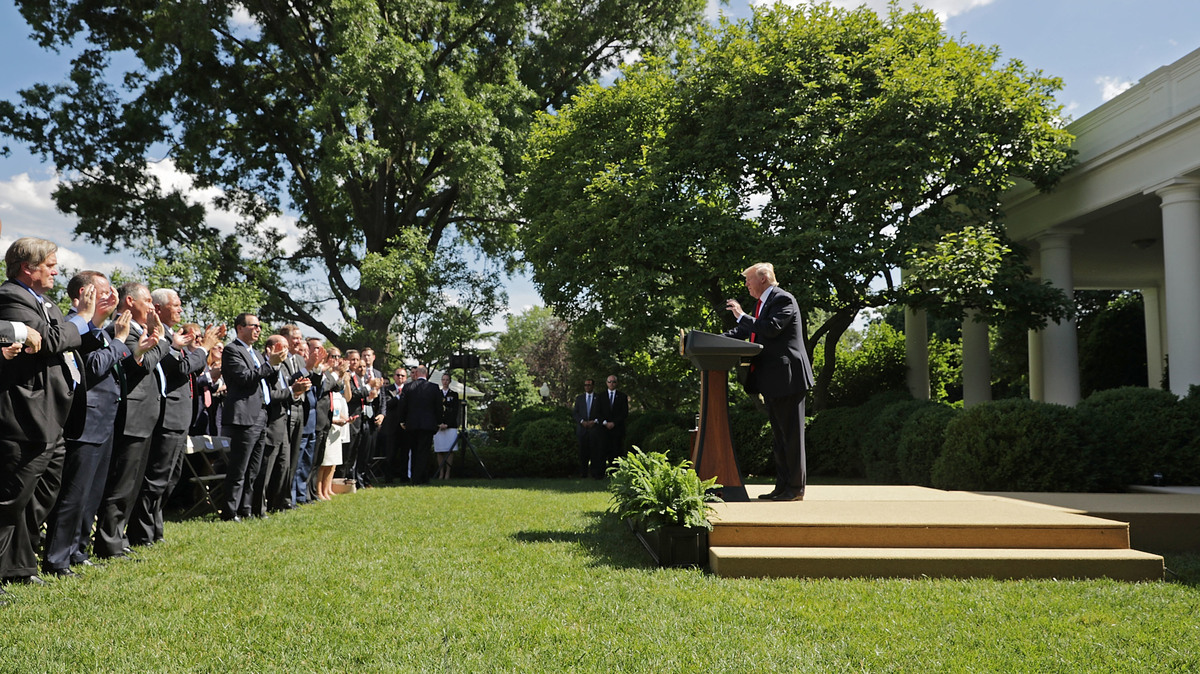 President Trump receives a standing ovation while announcing his decision to pull the United States out of the Paris climate agreement, June 1, 2017.

In an interview with the Washington Post published online Tuesday, President Trump brushed aside climate change concerns by hailing the state of the environment in the United States.

Asked why he was skeptical of a federal report detailing the significant consequences of climate change, Trump said: "One of the problems that a lot of people like myself — we have very high levels of intelligence, but we're not necessarily such believers. You look at our air and our water, and it's right now at a record clean."

Just how clean is the air in the United States right now?

It depends on what is being measured, and even then, context matters.

Trump was responding to a question about climate change, so let's first take a look at greenhouse gas emissions.

Carbon emissions from the U.S. have declined in recent years, but they are certainly not at their lowest level.

The latest numbers from the World Bank show U.S. carbon emissions at levels last seen in the mid-1990s. Emissions were much lower in the 1980s and earlier decades.

Energy-related emissions fell 0.9 percent in 2017 compared with a year earlier and were 14 percent below 2005 levels, according to the U.S. Energy Information Administration.

The drop in emissions is attributed to a number of factors including state and federal regulations and more use of natural gas, which is less carbon-intensive than coal for power production.

Even as emissions have declined, climate scientists say the U.S. is still emitting far too much carbon to combat climate change.

"We are nowhere near where we need to be to solve the problem," said Gretchen Goldman, a research director at the Union of Concerned Scientists.

Under the Obama administration, the U.S. set a target of reducing greenhouse gas emissions 26 to 28 percent below 2005 levels by 2025 as a part of the Paris Agreement.

With Trump pulling out of the deal and rolling back regulations aimed at sharply cutting emissions, the United Nations says the U.S. is not on track to hit that goal. 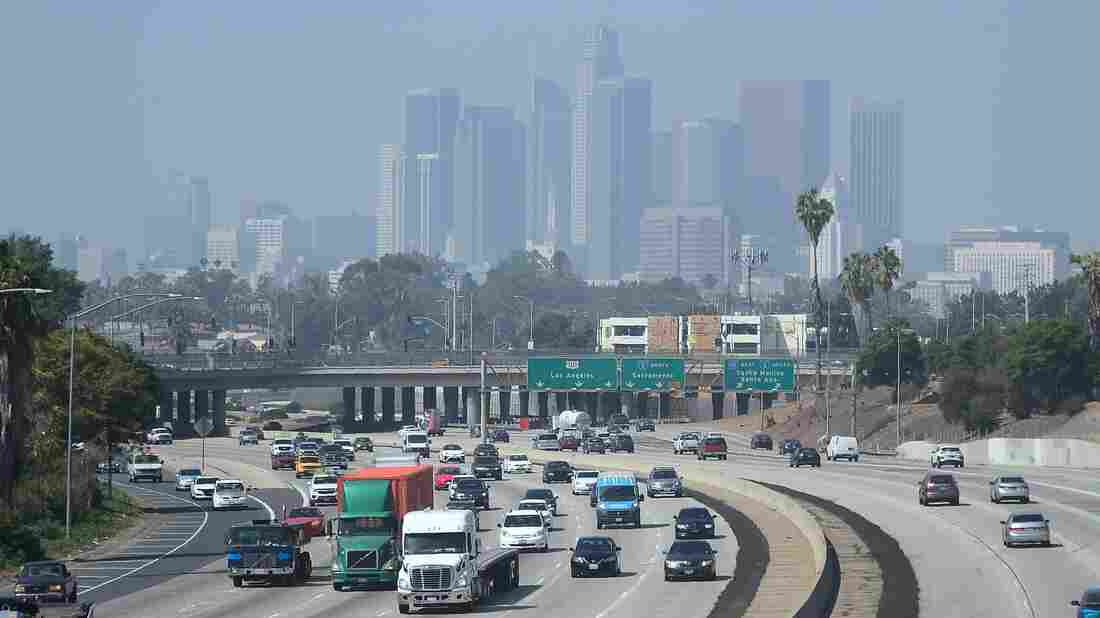 High-rise buildings in downtown Los Angeles are seen on a hazy morning in September. Although the Clean Air Act of 1970 resulted in greatly improved air quality in the U.S., smog worsened between 2014 and 2016, according to the American Lung Association. Frederic J. Brown/AFP/Getty Images hide caption 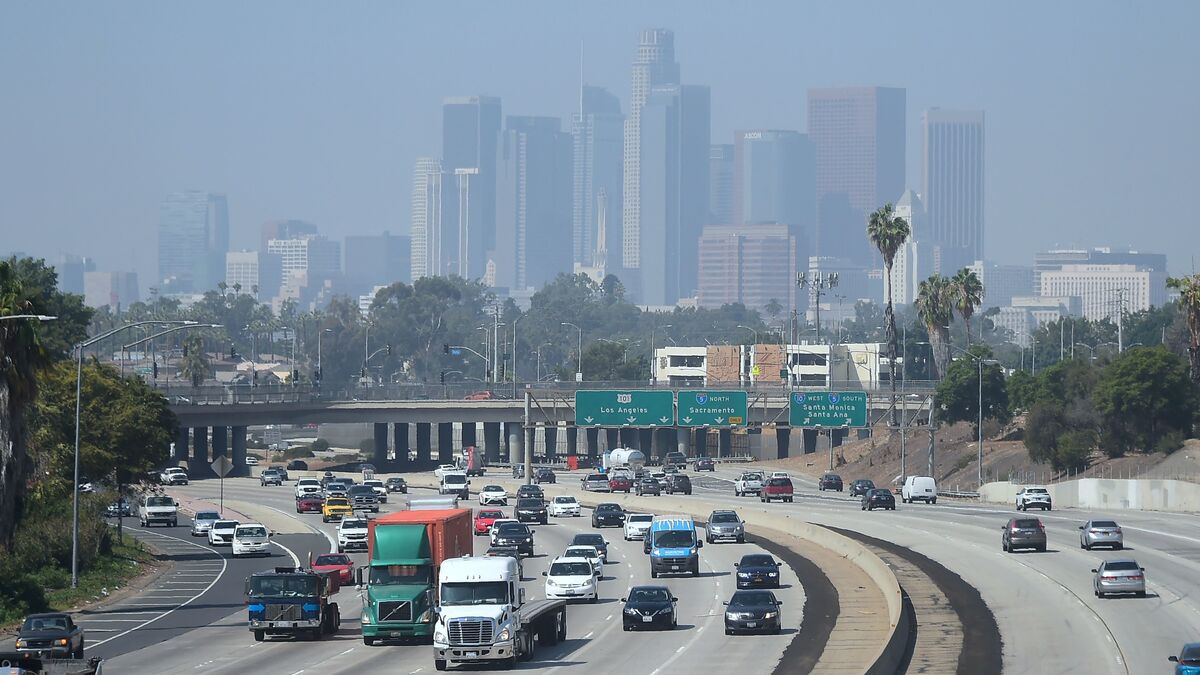 High-rise buildings in downtown Los Angeles are seen on a hazy morning in September. Although the Clean Air Act of 1970 resulted in greatly improved air quality in the U.S., smog worsened between 2014 and 2016, according to the American Lung Association.

In the Post interview, Trump also seemed to draw a distinction between climate change and air quality, although experts say the two are linked. After he mentioned "record clean" U.S. air, he talked about air pollution in other countries.

Trump often talks about wanting "crystal clean" air and about having the "cleanest air on the planet."

It's true that when it comes to air pollution, like smog, the U.S. is doing much better than countries like China.

Air quality greatly improved in the United States after the enactment of the Clean Air Act of 1970.

But an American Lung Association report found that smog, also known as ozone pollution, worsened in the U.S. between 2014 and 2016. The report also concluded that 4 in 10 U.S. residents live in counties with unhealthy levels of ozone or particle pollution.

What's the cause of worsening air pollution? The lung association blamed climate change and record-setting heat.

"We can't separate climate change from many of the environmental problems that we are tackling in this country," Goldman, of the Union of Concerned Scientists, said. "Climate change is affecting our air quality. Ozone pollution is expected to be exacerbated by warming temperatures."