Accessibility links
Angry Senators Say Trump Administration Is Stonewalling Amid Saudi Crisis The administration wants to stick by Riyadh, but the Senate looked for ways to punish Saudi Arabia for the role its crown prince is suspected of playing in the killing of journalist Jamal Khashoggi. 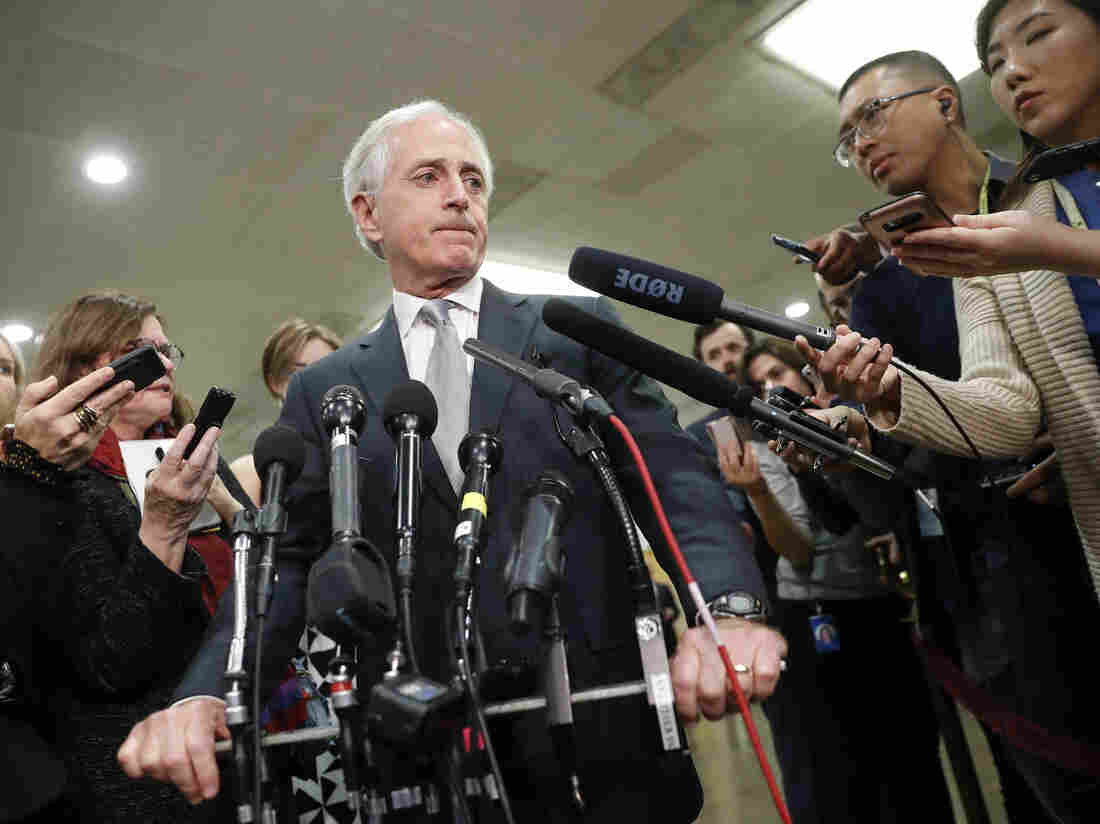 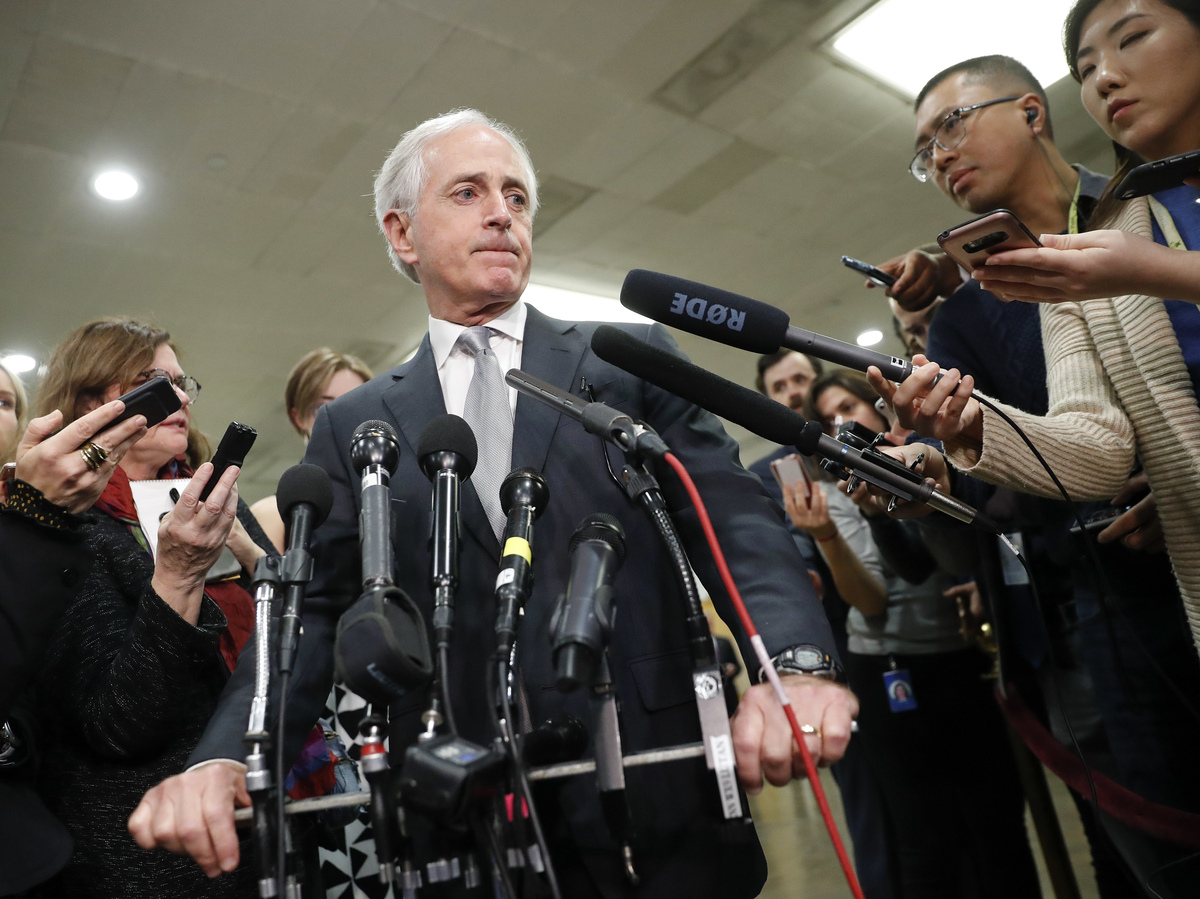 Sen. Bob Corker, R-Tenn., said he doesn't doubt that Saudi Arabia's crown prince is culpable for the death of a Washington Post writer in the Saudi Consulate in Istanbul.

Angry senators on Wednesday accused the Trump administration of stonewalling in an effort to avoid linking Saudi Arabia's crown prince to the killing of journalist Jamal Khashoggi.

In a rare rebuke of the White House, even Republicans complained they weren't getting the full story. Sen. Lindsey Graham, R-S.C., threatened to withhold key votes until he gets the answers he is looking for. Lawmakers also vented their frustration during a procedural vote on Yemen.

The complaints started with the personnel involved.

The CIA has assessed that Crown Prince Mohammed bin Salman approved Khashoggi's killing, according to a person briefed on the matter. President Trump has rejected that assessment, insisting, "maybe he did and maybe he didn't."

Haspel traveled to Turkey as part of the information-gathering process and is said to have heard an audio recording that depicts Khashoggi's death. Her absence from the Senate left Pompeo and Mattis to echo the more skeptical interpretation Trump has taken of the CIA's assessment.

"There is no direct reporting connecting the crown prince to the order to murder Jamal Khashoggi," Pompeo told reporters. "That's all I can say in an unclassified setting."

The absence of a "smoking gun"

Mattis agreed there is no "smoking gun" to link the crown prince, who is also known as MBS, to Khashoggi's Oct. 2 killing at the Saudi Consulate in Istanbul.

Several senators were not convinced.

"I don't think there's anybody in that room that doesn't believe he was responsible for it," said Sen. Bob Corker, R-Tenn., chairman of the Senate Foreign Relations Committee.

"It's outrageous that the Senate can be stonewalled from hearing from the CIA director," added Sen. Bob Menendez, D-N.J., the committee's top Democrat.

Graham, typically a reliable supporter of the president's, said he would have trouble voting for a must-pass spending bill or other legislation until he hears from the CIA director.

"Anything you need me for, to get out of town, I ain't doing it," Graham threatened. "I'm not going to be denied the ability to be briefed by the CIA, that we have oversight of, about whether or not their assessment supports my belief that this could not have happened without MBS knowing."

A CIA spokesman said in a statement that the agency has already briefed the Senate intelligence committee on its findings concerning Khashoggi's death. He denied that the White House had barred Haspel from attending Wednesday's briefing.

Implications for the war in Yemen

The senators' frustration spilled over into a procedural vote Wednesday on a resolution to end U.S. support for the Saudi-led war in Yemen. Senators voted 63-37 to advance the measure. A final vote on the resolution is not expected before next week.

Pompeo warned that withdrawing American support from the war could undermine U.S. efforts to broker a cease-fire.

"We're right on the cusp of that," Pompeo said.

He also warned that passing a resolution against the war would encourage Yemen's Houthi rebels, who are backed by Iran.

"Abandoning Yemen would do immense damage to U.S. national security interests and those of our Middle Eastern allies and partners," Pompeo said in remarks prepared for the closed-door briefing.

But senators were in no mood to back down.

"The Khashoggi incident has also gotten a lot of people's attention," said Sen. Mike Lee, R-Utah, a co-sponsor of the resolution to end support for the war. He wondered why, after the killing, the U.S. should "so blindly and so willingly" join the Saudis in their war in Yemen.

"We are not going to be continuing to be part of that humanitarian disaster," Sanders said. "We are ending our participation in that horrific war."