Accessibility links
'Come With Me' Lays Bare The Risks And Regrets Of Our Online Lives Helen Schulman splices together an old-school family drama with high-tech fantasy in her new novel, a rich, closely observed story about regrets and risk-taking in the Internet age. 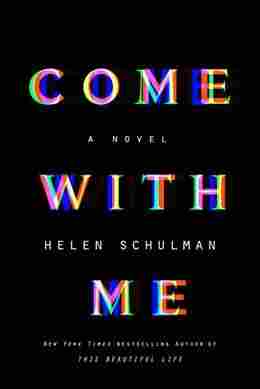 The Great Internet Novel. Like the great white whale, it's rumored to be out there somewhere beyond the horizon. So far, the novelists who've been hailed as coming closest to writing it have done so in dystopian doorstoppers even longer than Herman Melville's Moby Dick; I'm thinking of The Circle, by Dave Eggers, and Book of Numbers, by Joshua Cohen, both of which tell sweeping cautionary tales about the wired life within Facebook-type cult compounds.

But Helen Schulman is taking a different tack in capturing the Internet revolution: She's zooming in tight and close on all those computers and smart phones scattered around the rooms where we live.

Schulman has a gift for vividly tracing the fallout on the domestic realm from that hard-to-pinpoint historic moment when the Internet first drifted through the walls of the American home. In her bestselling and harrowing 2011 novel, This Beautiful Life, Schulman described how a sexting scandal broke apart an otherwise solid family and school community.

Now, in her new and much more narratively ambitious novel called Come With Me, Schulman splices together an old-school family drama with high-tech fantasy: It's a rich, closely observed story about regrets and stupid risk-taking set mostly among the coders, crunchers and ordinary citizens of Palo Alto, Calif.

The heroine of Schulman's story is Amy Reed; she's a middle-aged mom who finds herself in the humbling position of working as a PR flunky for her old college roommate's 19-year-old son. Donny is a brilliant Stanford undergrad who's founded his own startup; he's just invented an algorithm that allows users to access all the alternative lives they might have lived, or as he calls them, "multiverses."

Here's how it works: Donny knows a lot about Amy's early life from his gossipy mother and, more disturbingly, from the Cloud, where, apparently, the most personal information floats, ripe for the picking. Equipped with this data, Donny creates what he calls a "personalized crystal ball" for Amy.

Donny instructs Amy to strap on a virtual reality headset and journey into her various "what if?" lives. What if she'd married her handsome-but-feckless actor boyfriend?; What if she'd tripped that time she was running after her then-toddler son and didn't catch up to him before he ran into the busy street? What if she'd carried that unplanned early pregnancy to term?

Even as Amy is being traumatized at work by these deep dives into her alternative lives, the Internet is changing the texture of her family's daily routine at home. Amy's teenage son, Jack, maintains an intimate relationship with his out-of-town girlfriend mostly via Web cam, while her husband, Dan — a former journalist who got phased out of his job at a "dead-tree" publication — spends his days angrily tweeting. We're told:

No wonder [that] Dan, bitter and scared, clung to his iPhone the way "some cling to their religion and their guns." It was like an oxygen tank for his breath-starved mind.

Come With Me is ingeniously structured around three non-consecutive days in the lives — both virtual and real — of Amy and her family. There are a lot of storylines here, as well as a lot of humor and heart. Amy is the fully realized moral center of the novel, intrigued by innovation, but also graced with a witty feminist skepticism about the male-dominated tech industry. For instance, reading an article that theorizes that tech may one day cheat death by making it possible to download the human brain into a robot, we're told Amy reflects:

When she was in college and studied literature, it was male novelists who'd believed they could use their craft to achieve immortality. Updike, Mailer, Bellow. They'd behaved as if the written word could defy death, but clearly it ... had not. [Her teenage son Jack had] never heard of any of them.

Fair enough, but I'm still putting my money on literature to transcend time. In fact, if at this moment, I had to recommend one contemporary novel to the readers of the far future to give them a sense of how we newbies are struggling to grasp the unforeseen powers of the World Wide Web, I'd give them Schulman's Come With Me. It poignantly captures the wonder, as well as the cluelessness, of how we live now.