Accessibility links
'Talent Wants Transit': Companies Near Transportation Gaining The Upper Hand Businesses like Amazon and McDonald's are building offices near bus and train lines to attract and keep top talent in a tight labor market. 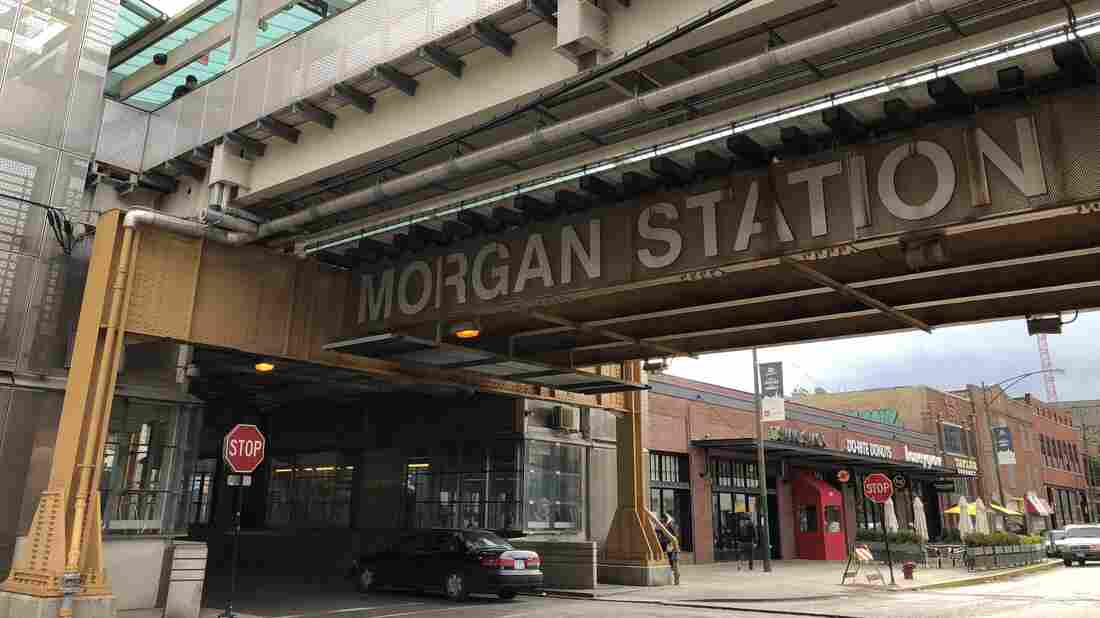 McDonald's moved its corporate headquarters from the Chicago suburbs into the city. The new location is near two Chicago Transit Authority "L" stops, including Morgan Station, a 2012 addition to the system. David Schaper/NPR hide caption 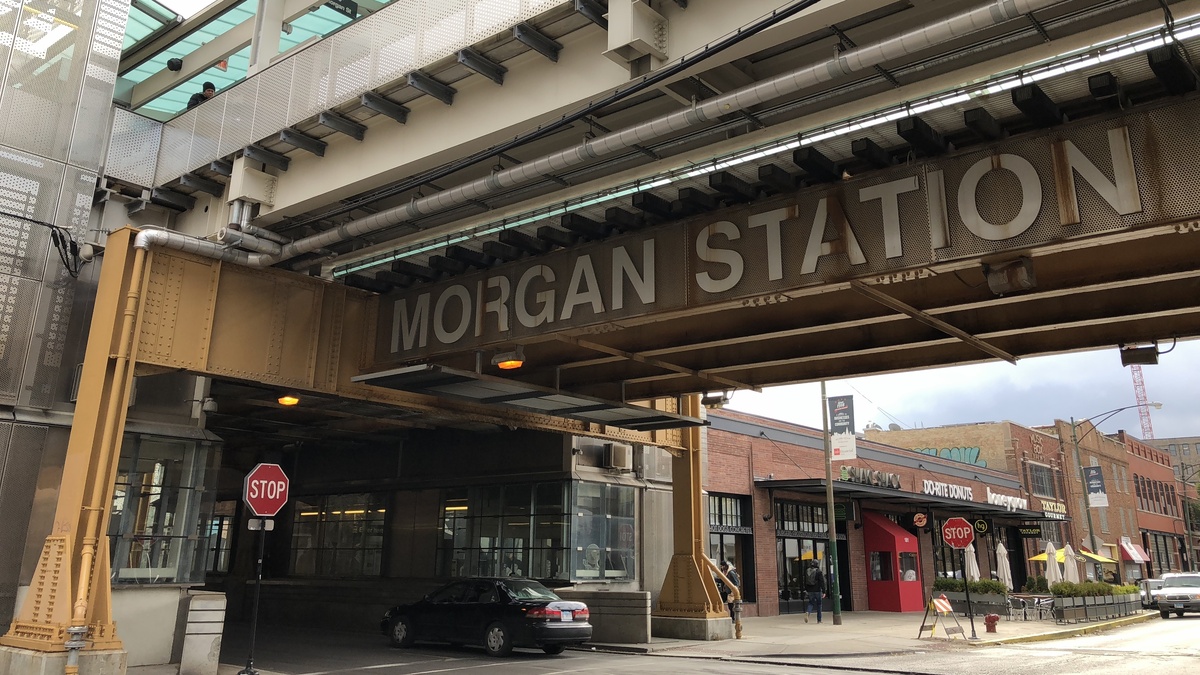 McDonald's moved its corporate headquarters from the Chicago suburbs into the city. The new location is near two Chicago Transit Authority "L" stops, including Morgan Station, a 2012 addition to the system.

One of the important criteria in Amazon's high-profile search for a second (and third) corporate headquarters was access to public transportation for the company's employees. The company chose Queens, N.Y., and Arlington, Va., for its new HQ2s — both locations will be near subway stops. And a new study finds Amazon is not alone in this regard; businesses all over the country increasingly want to be near bus and train lines, as they struggle to attract and keep top talent in a tight labor market.

A case in point is McDonald's, a company that owes its enormous success to people driving their cars. After all, the fast-food giant sells millions of meals through drive-through windows.

For decades, McDonald's made its corporate home in a sprawling campus in the Chicago suburb of Oak Brook, Ill.; a location that was pretty much only accessible by car.

A few months ago, McDonald's traded the lawns, trees and ponds of its suburban home for sidewalks, concrete, glass and steel and moved into a new corporate headquarters building, just west of downtown Chicago. It's within walking distance of a stop on two Chicago Transit Authority "L" lines, two Metra commuter rail stations and several bus stops and is easy to get to by bicycle.

"We actually at one point knew that 97 percent of our folks were arriving by themselves in a car," says Sheri Malec, director of workplace solutions for McDonald's. She says the 80-acre parklike setting worked well for the company through the '70s, '80s and '90s, but more recently, the remote, suburban location made it difficult for McDonald's to attract and retain talent — especially millennials.

"For a job open on my team a couple weeks ago I interviewed a young woman and she confided in me, 'You know, I really wouldn't have applied for the job if it had been in Oak Brook, because I don't own a car,' " Malec says. 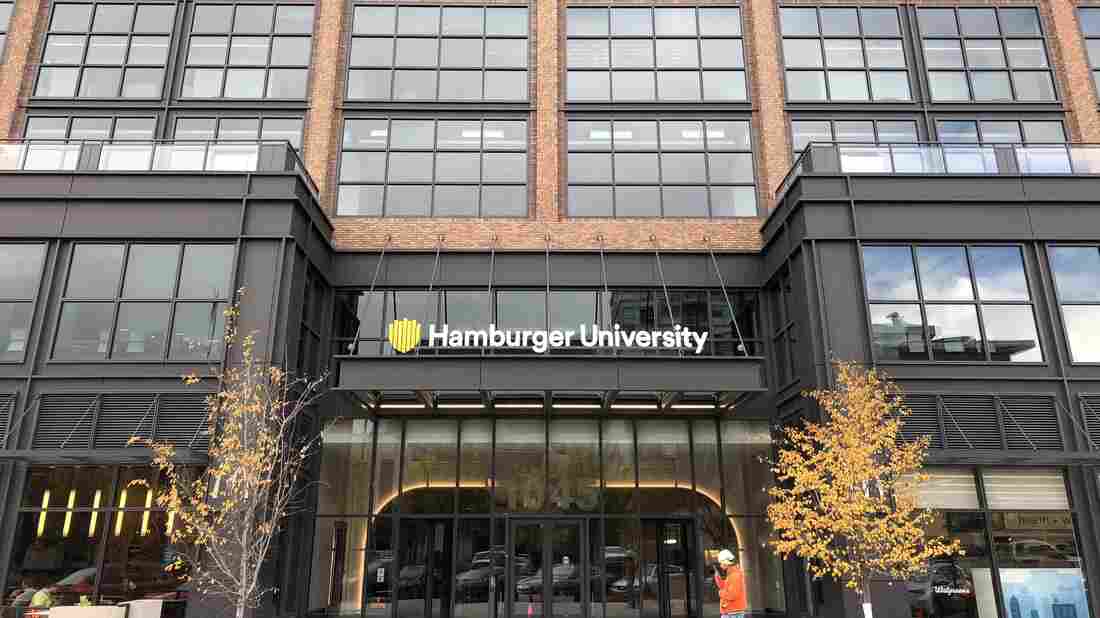 McDonald's new corporate headquarters building is just west of the Loop in downtown Chicago. The neighborhood, once a bastion of warehouses and food wholesalers, is now home to office buildings, restaurants, condos and loft living spaces, all sparked by the opening of the new L station. David Schaper/NPR hide caption 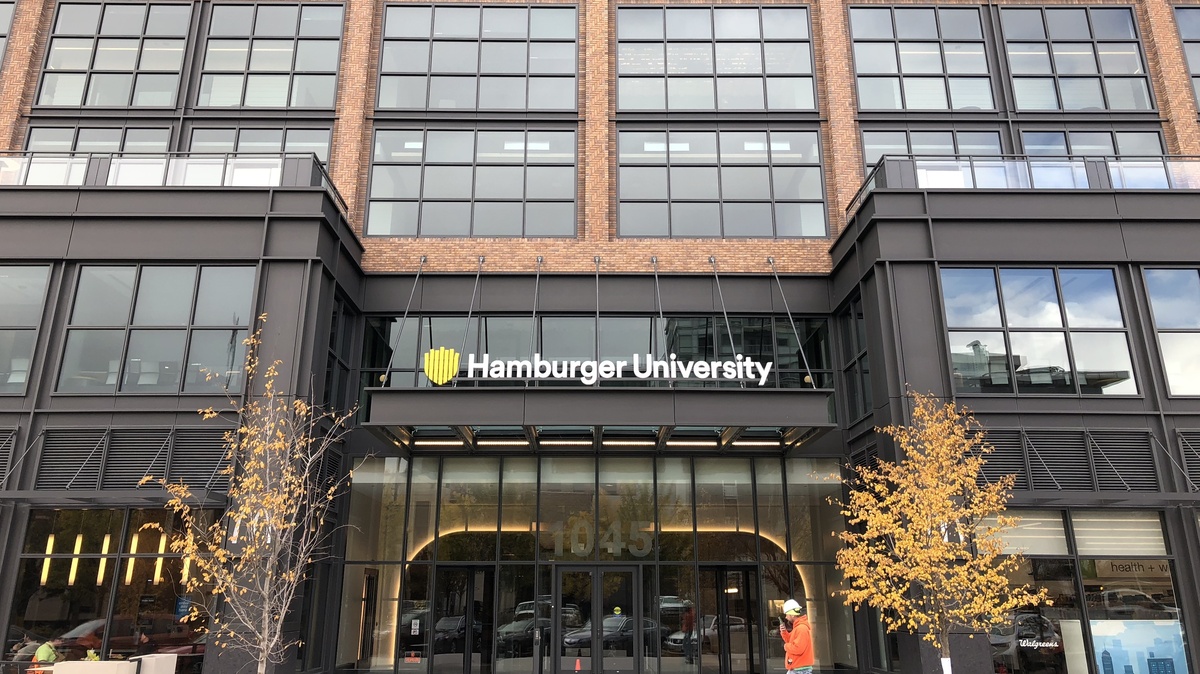 McDonald's new corporate headquarters building is just west of the Loop in downtown Chicago. The neighborhood, once a bastion of warehouses and food wholesalers, is now home to office buildings, restaurants, condos and loft living spaces, all sparked by the opening of the new L station.

So instead of having 97 percent of McDonald's corporate employees commuting to work with each of them alone in a car, Malec says, "right now, we have I think around 90 percent of our folks are arriving in a nonautomobile fashion."

Chicago isn't the only region experiencing this business boom along transit lines. From Seattle to St. Louis and Minneapolis to Atlanta, studies show that companies are relocating to be near transit lines, as they seek to attract workers, especially millennials, who prefer living in more urban areas and increasingly don't want the long, driving commutes of their parents' generation.

"Talent is choosing to ride transit," says Audrey Wennink, director of transportation at Chicago's Metropolitan Planning Council, a regional nonprofit research and advocacy organization on urban issues, and co-author of a new study indicating that more and more businesses want to be located close to rail and bus stations.

The report shows that since 2005, 60 percent of all the new jobs created in the Chicago region are in areas with high-quality transit service, and about half of all newly created jobs are within a half mile of a CTA L or Metra rail station. Within a quarter mile of a CTA L or Metra station, jobs grew at a rate of 20 percent, which is more than twice the growth rate in the region as a whole, according to the MPC report.

"To have the most broad labor pool and access to the best workers, [businesses] need to offer [access to transit lines] as an option," says Wennink.

One example is the Fulton Market neighborhood west of Chicago's central business district downtown, which used to be full of produce and other food wholesalers, distributors and a lot of big warehouses. But not anymore. Now it's new office buildings, condos and loft living spaces. And Wennink says a big game changer was the opening of the Morgan Street L stop in 2012. "There's been development incessantly since then," she says. "McDonald's moved here. Google's [Midwest] headquarters are here; they've been here for about three years. We have tons of restaurants; there are tons of co-working spaces. This is the hip neighborhood."

MPC's research also finds that in 2017 alone, 85 percent of all new business construction in the Chicago area occurred within a half a mile of a transit station, and Wennink says the data also show that transit fosters economic resiliency.

The business boom around transit is not just a city thing, but it's happening in the suburbs too.

Companies that are moving to the suburbs are finding locations where their talent can commute via public transit, says Vicki Noonan, executive managing director of the commercial real estate firm Cushman & Wakefield in Chicago.

One example is the heavy equipment manufacturer Caterpillar, which just relocated its corporate headquarters from Peoria, Ill., to a Chicago suburb but located the office close to a commuter train station.

"There are some larger vacancies up in that area along what we would view as a major driving corridor," Noonan says, referring to suburban corporate office spaces that are only accessible by car. She says those buildings that are close to commuter rail stations are in high demand.

One building owner, she says, decided to fight the trend by providing free shuttle buses to transit stations and even showers for those who want to bike from the train.

"That office building is almost 100 percent full when others around them are vacant because they took the time to say, 'OK, we need to figure out our workforce, how are they getting here and how can we enhance their experience?' " says Noonan.

"At the bottom line of everyone's search is they want to optimize the financial performance of either the asset they're buying or the space that they are leasing," says Noonan. "You have a higher probability of that on a transit line than you do when you're off the transit line," she says, because transit improves a company's ability to attract and retain talent.

Where transit goes, the economy grows.

"Where transit goes, the economy grows," says Kirk Dillard, the chairman of the Regional Transportation Authority in Chicago.

But Dillard says many of the nation's aging transit systems, Chicago's included, are in desperate need of repairs and upgrades.

"I ride in every day on a Metra train that was delivered when Dwight Eisenhower was president," Dillard says. "We need new equipment; we need to stay up with 21st century technology."

Rail and bus systems around the country have backlogs of repair and maintenance needs in the billions of dollars, and transit advocates say not only is more state and local funding needed for upgrades and to expand transit routes but a big federal infrastructure investment is needed, too. Without it, they fear the nation's economic growth could suffer. But they note such funding may be hard to get out of a federal administration that seems at times hostile to transit and instead seems to want to invest more in highways.