Accessibility links
Gorgeous 'Black Future Month' Tracks A Writer's Development N.K. Jemisin's new story collection is a story in itself, a chronicle of her career that has the seeds of her award-winning novels, but also lovely and thought-provoking stand-alone work. 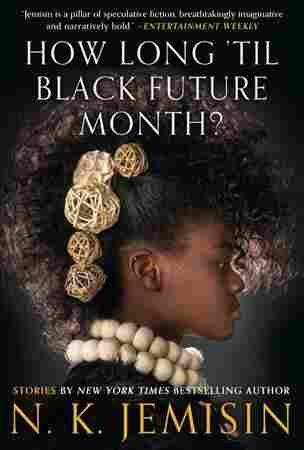 How Long 'til Black Future Month?

Earlier this year, N. K. Jemisin made history when she became the first author to win the Hugo Award for Best Novel for three consecutive years, each volume in her Broken Earth trilogy receiving science fiction and fantasy's highest honor. But her very first award nomination was for short fiction: "Non-Zero Probabilities," a short story imagining a New York City where probability's been skewed so that the most improbable things happen on a regular basis, was nominated for both the Hugo and Nebula awards back in 2010.

That story is among 22 included in How Long 'Til Black Future Month, Jemisin's first collection of short fiction — one that begins, deliciously, with "Once upon a time, I didn't think I could write short stories."

I want to dwell in Jemisin's introduction, because I love when writers are good readers of their own work. In it she anticipates a lot of what I'd like to say about the collection: That there are seeds in here of her celebrated novels; that these stories track the development of her craft and her voice, see her shed hesitation and reluctance around talking about race and racialized bodies; that they also constitute a very deliberate decision to imagine futures that contain people of color.

But one of the most marvelous aspects of this gorgeously Afrofuturist collection is that it's also, ironically, a time capsule. Containing stories written between 2004 and 2017, it occasionally imagines futures grown from earlier moments of our shared lives on the internet — from LiveJournal, from fora and discussion boards — that tripped me into nostalgia for earlier, more innocent visions of apocalypse. Stories like "Too Many Yesterdays, Not Enough Tomorrows," "The Trojan Girl," and "Cloud Dragon Skies" feel rooted in conversations about singularities, artificial intelligence, and climate disaster that were decidedly more speculative ten years ago than they are now. There are whole languages and discourses, all but obliterated in our present era of social media, that I was shocked and delighted to find preserved in the amber of Jemisin's prose.

That said, the collection isn't organized chronologically but thematically, like a symphony with distinct movements. There are stories about cities, bodies, and the similarities between them; there are stories about hunger, and food, and the shapes they can take; there are stories that argue directly with the canon that provoked them. "Who is to say plutonium is more powerful than, say, rice?" asks a character in "L'Alchimista"; "All the monsters were right here. No need to go looking for more in space," says another in "Walking Awake." Themes and ideas are passed back and forth between stories, accreting and accelerating as they develop, like a coin collecting heat as it's passed from hand to hand.

Jemisin's strengths lie at the intersection of character and setting, storytelling parts that definitely show to best effect in longer work, so I wasn't surprised to find the stories I loved most in this collection were connected to her novels: "The Narcomancer" is set in the world of her Dreamblood novels, and "Stone Hunger" in The Broken Earth. But there are so many lovely, moving, thought-provoking standalones too. I especially loved how beautifully and effectively Jemisin writes food and cooking, always alive to the ways in which food is wedded to culture, family, magic. In "Cuisine des Mémoires," two friends frequent a very exclusive restaurant that recreates any meal the customer can remember; in "Red Dirt Witch" a memory of rosemary becomes a weapon against evil spirits.

There were stories that didn't quite come together for me, that I appreciated more for their ideas than their execution, and one of them is unfortunately the very first: "Those Who Stay and Fight," a response to Ursula K. LeGuin's "Those Who Walk Away from Omelas," starts out as a pitch-perfect pastiche but then seems to change its project in a way that muddles its argument, and "The Brides of Heaven," though it nestles tidily into a quartet of stories about xenobiology, bodily autonomy and the lack thereof, had a portrayal of Islam that felt cursory in ways that left me dissatisfied. But these were exceptions to a general rule of awe and admiration; overall these stories demonstrate a gathering strength, a flexing of new muscle.

Jemisin's introduction to this collection of stories is a story in and of itself: it begins with "once upon a time," traces her peripatetic journey through cities and careers over a decade and change, and ends with a nod towards the future. One line from it has tattooed itself on my mind, a sort of manifesto for her ongoing work and all the fiction I love: "Now I am bolder, and angrier, and more joyful."

I felt, after reading those stories, that I was too.