Accessibility links
George H.W. Bush Dies: Former U.S. President Was 94 The patriarch of a political dynasty, Bush was the last World War II vet to serve in the Oval Office. His son George W. called him "one of the greatest one-term presidents in the nation's history."

George Herbert Walker Bush died Friday at the age of 94.

Former President George W. Bush released a statement, saying for himself and his siblings, "Jeb, Neil, Marvin, Doro, and I are saddened to announce that after 94 remarkable years, our dear Dad has died."

"George H.W. Bush was a man of the highest character and the best dad a son or daughter could ask for," he said of the 41st president. "The entire Bush family is deeply grateful for 41's life and love, for the compassion of those who have cared and prayed for Dad, and for the condolences of our friends and fellow citizens."

There were fears that after his wife, Barbara, died in April, Bush might die, too. He was admitted to the hospital with a blood infection on April 23, one day after the funeral for the former first lady, and remained there for 13 days. He also spent time in the hospital in May and June, but lived to be the first former president to reach the age of 94.

Bush was the patriarch of a political dynasty that included one son who served as president, another as a governor and a grandson who currently holds statewide office in Texas. 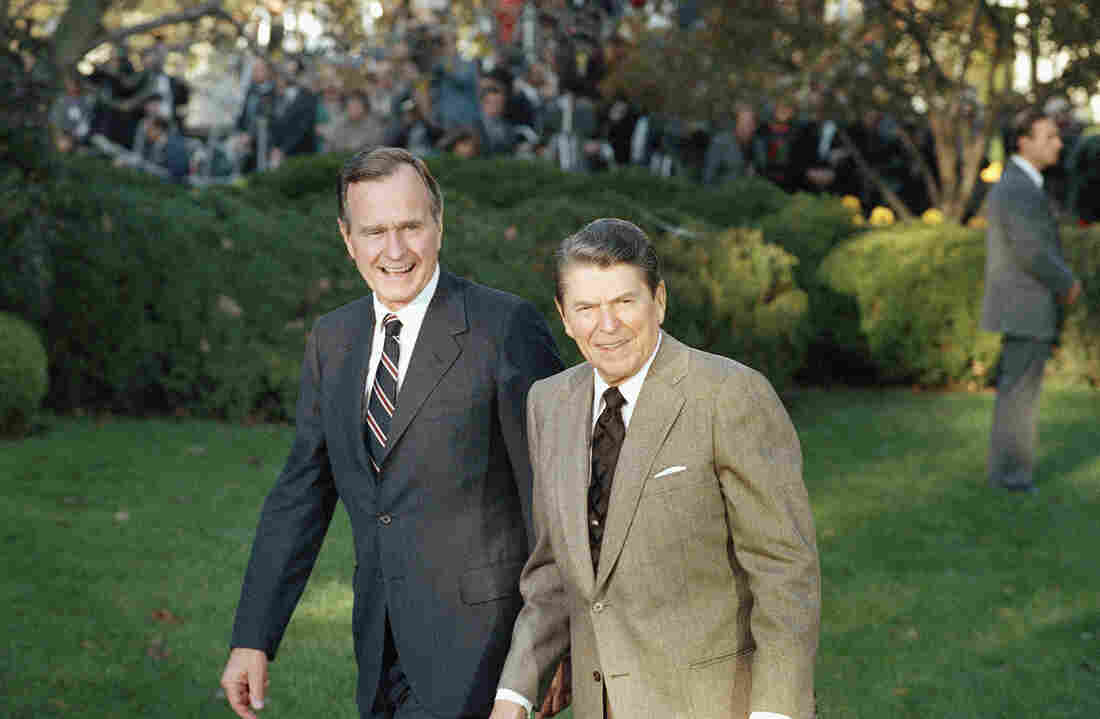 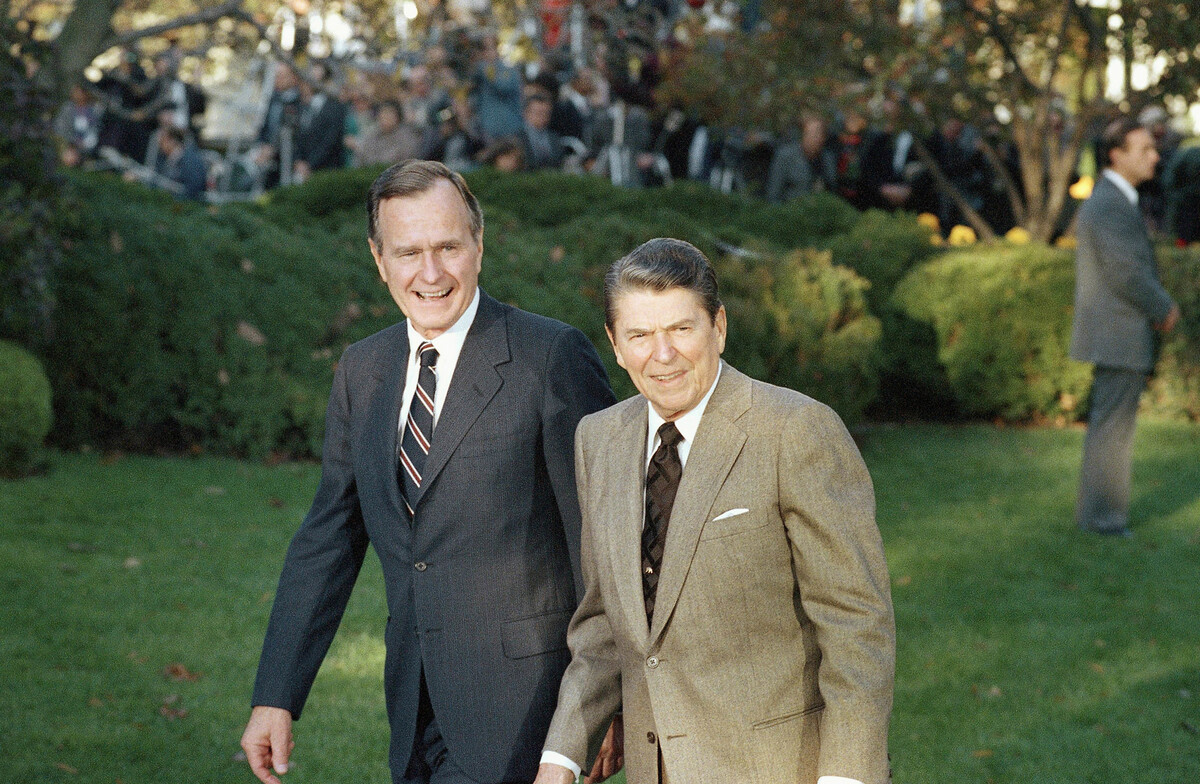 The senior Bush had a lifetime of public service before he became president — as a young Navy pilot in World War II, Texas congressman, CIA director and faithful vice president to Ronald Reagan.

"His loyalty to Ronald Reagan was legendary," said biographer Timothy Naftali. "He did not always agree with Ronald Reagan. And he was so secretive about those moments where he disagreed, we don't even have good documentation — at least not available yet — on when he disagreed."

Bush famously disagreed with Reagan when he ran against him in the Republican primary of 1980. Bush branded Reagan's supply-side faith that government could slash tax rates without losing revenue as "voodoo economic policy."

History would prove that assessment right. Reagan later had to reverse some of his tax cuts in the face of mounting deficits. But by the time Bush ran to succeed Reagan, he knew what it took to win the confidence of conservative Republicans.

Bush trounced Democrat Michael Dukakis that year to win the White House. But he ultimately backtracked on his lip-reading promise. During 1990 budget negotiations with Democratic congressional leaders, Bush, like Reagan before him, agreed to a tax increase. 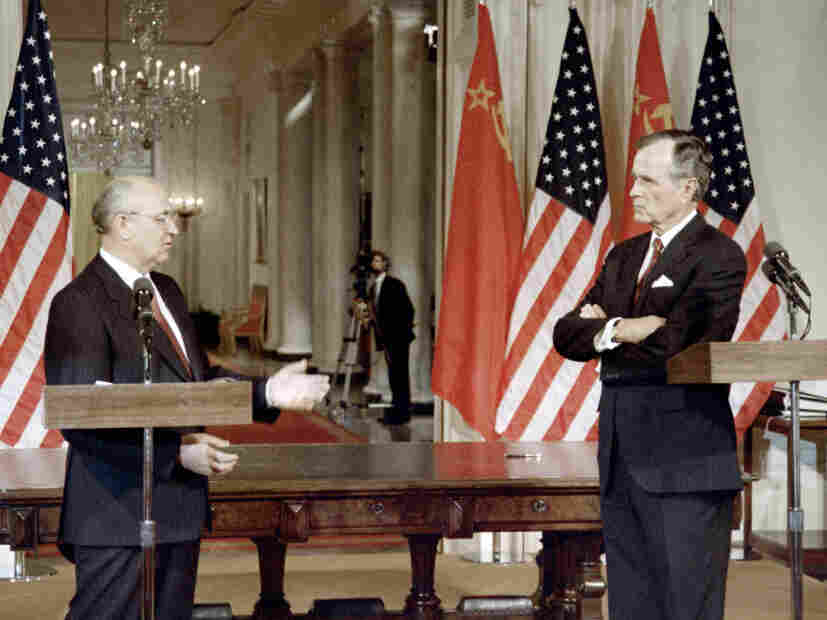 Bush talks with Soviet President Mikhail Gorbachev during a signing ceremony at the White House on June 1, 1990. Bush and Gorbachev signed the foundation of a treaty for the first-ever cuts in nuclear missiles and a pact to slash chemical weapon stockpiles. J. David Ake/AFP/Getty Images hide caption 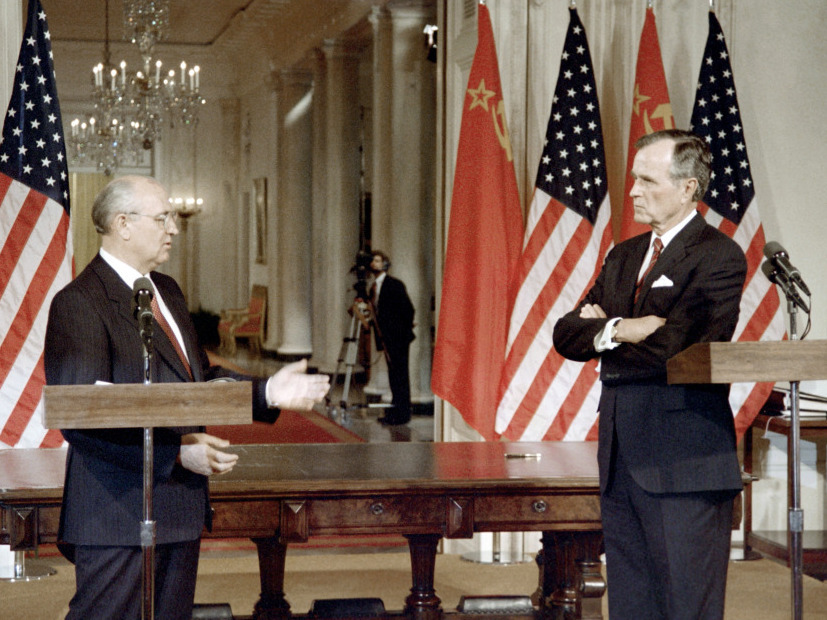 Bush talks with Soviet President Mikhail Gorbachev during a signing ceremony at the White House on June 1, 1990. Bush and Gorbachev signed the foundation of a treaty for the first-ever cuts in nuclear missiles and a pact to slash chemical weapon stockpiles.

His press secretary, Marlin Fitzwater, recalled a budget meeting where the deal was presented.

"The minute I saw it, I looked around the table and the Democrats looked like the cat who ate the canary," Fitzwater said. "They knew they had negotiated a winner."

The tax hike cut the deficit, but it cost Bush dearly with conservatives. Years later, he would receive a Profile in Courage award from John F. Kennedy's grandson, who said, "America's gain was President Bush's loss."

Bush's most notable accomplishments in the White House came in the area of foreign policy. While Reagan is often credited with winning the Cold War, it was Bush who successfully navigated the aftermath. His low-key approach avoided inflaming communist hard-liners and allowed for the peaceful breakup of the Soviet Union.

"The soft landing that occurred, which was not inevitable, is in large measure due to George H.W. Bush's diplomacy," said Naftali.

Bush, who served as U.S. envoy to China as well as a globe-trotting vice president, had a thick Rolodex and plenty of experience working the phones. His lifetime of foreign contacts also came in handy when Iraqi troops invaded Kuwait in 1990. Bush methodically assembled an international coalition to push them back. 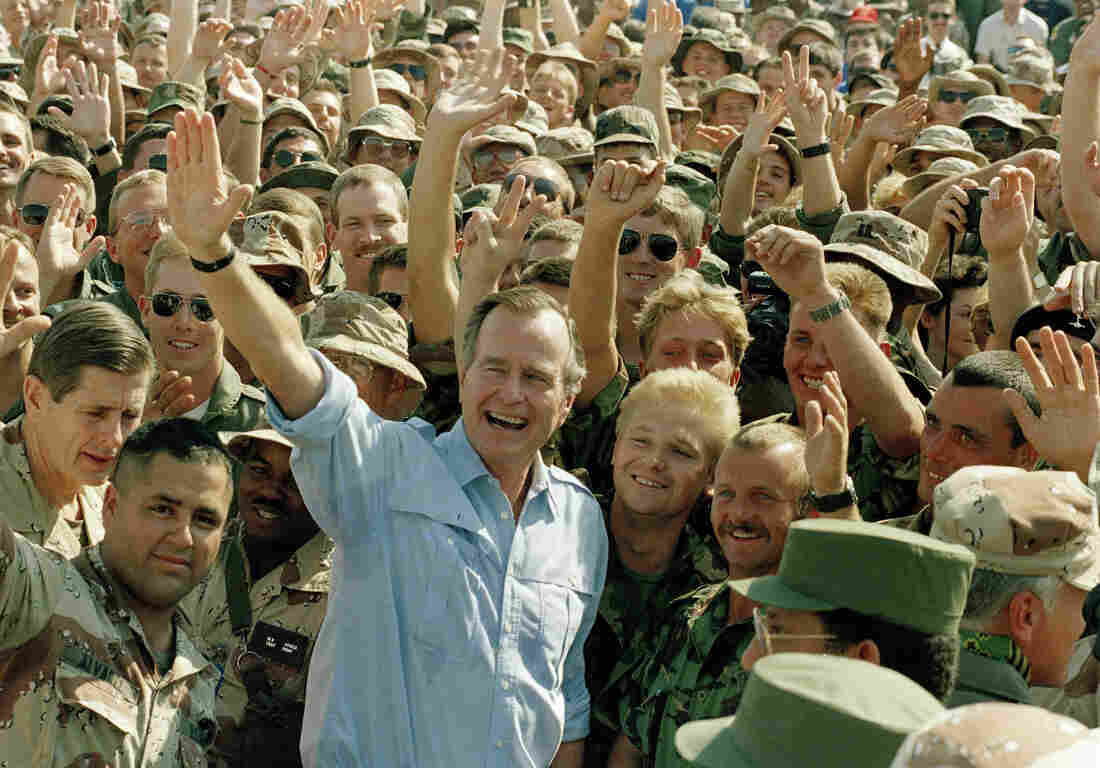 Bush poses with soldiers during a stop at an air base in Dhahran, Saudi Arabia, on Nov. 22, 1990. J. Scott Applewhite/AP hide caption 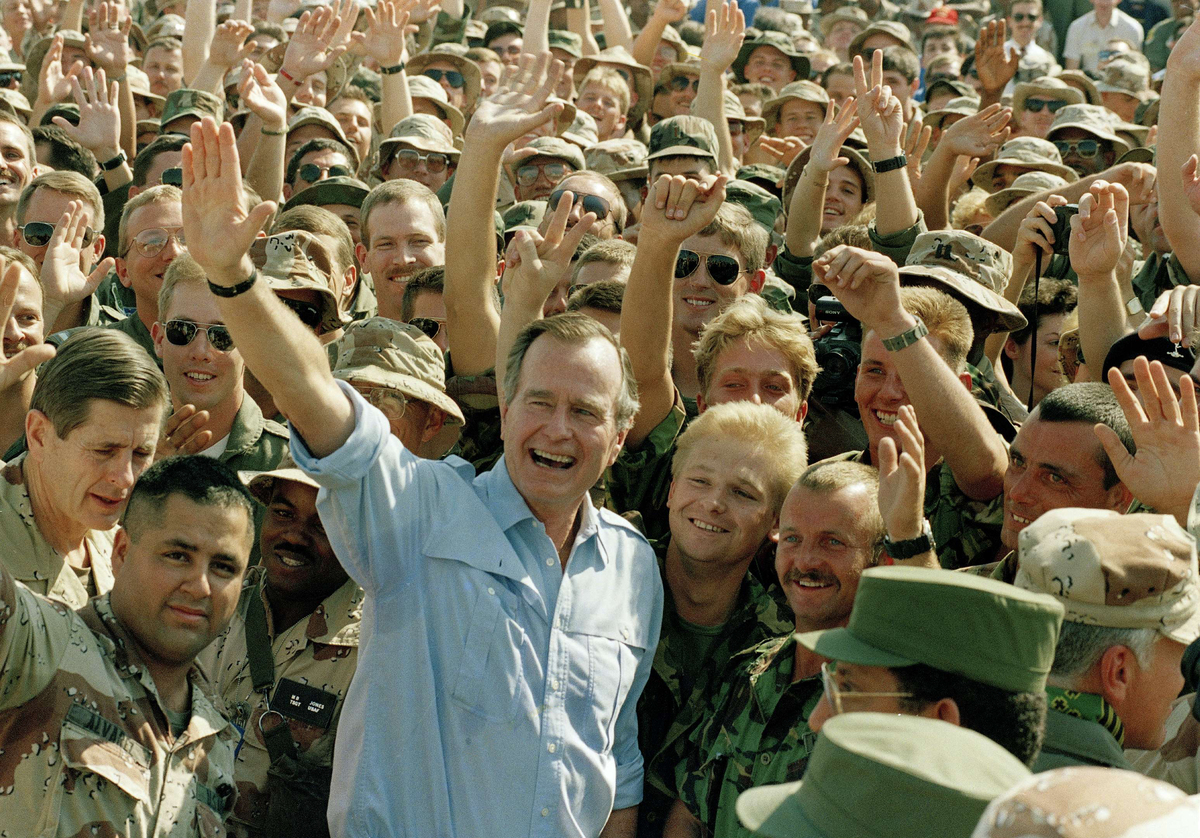 Bush poses with soldiers during a stop at an air base in Dhahran, Saudi Arabia, on Nov. 22, 1990.

A five-week bombing campaign was followed by a 100-hour ground assault that routed the Iraqis from Kuwait. Some wanted allied troops to push on to Baghdad and topple Iraqi leader Saddam Hussein. But Bush said no.

"The president's decision was we are not going on to Baghdad," the late diplomat Lawrence Eagleburger recalled. "If we do, we will have violated the agreement we have with our allies, which was to bring Saddam out of Kuwait. It was not to bring Saddam down. And in addition, it will tie us into an area where we cannot be sure how soon we can withdraw." 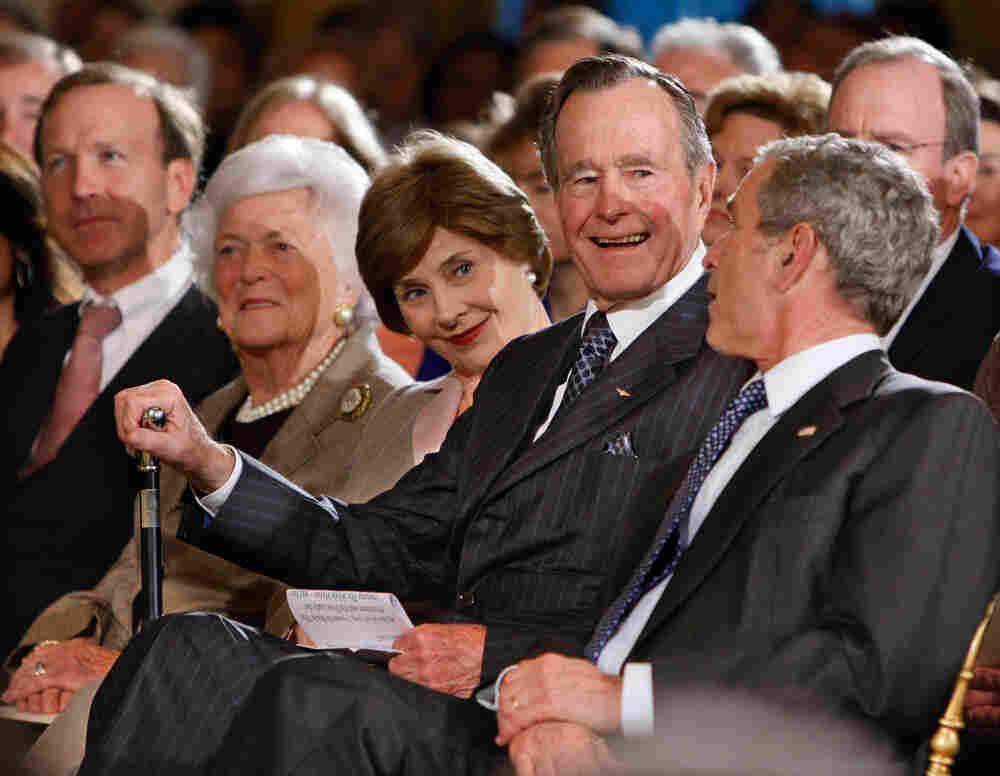 Bush with (from left) his son Neal Bush; wife, Barbara Bush; daughter-in-law Laura Bush; and son former President George W. Bush at a reception in honor of the Points of Light Institute at the White House on Jan. 7, 2009. Ron Edmonds/AP hide caption 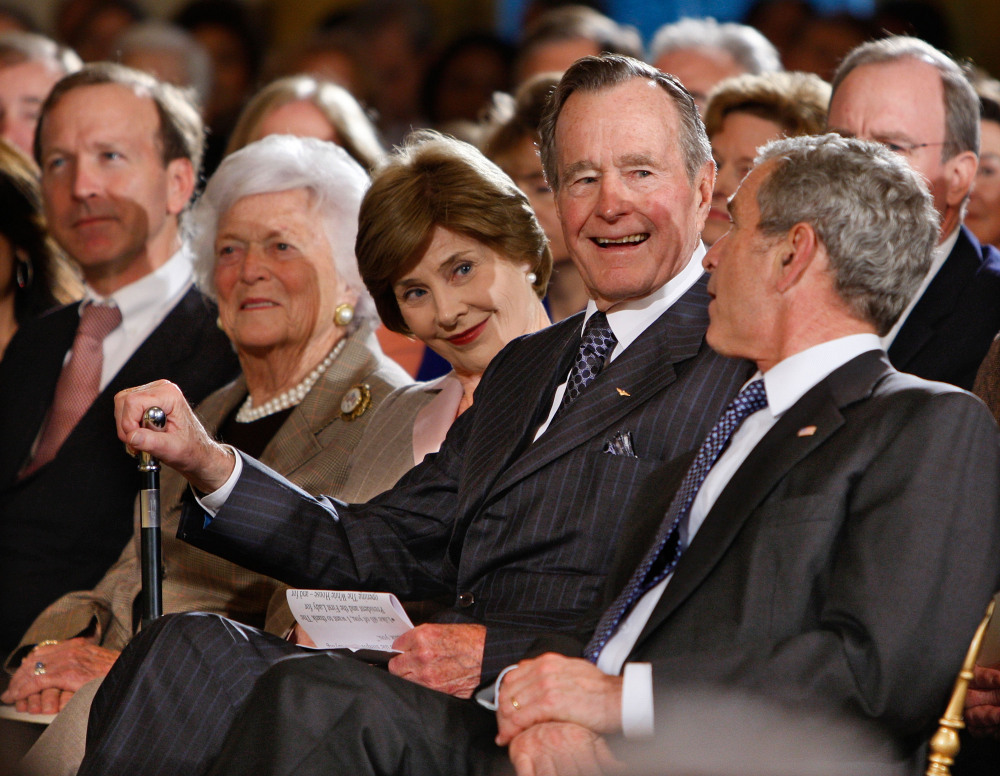 Bush with (from left) his son Neal Bush; wife, Barbara Bush; daughter-in-law Laura Bush; and son former President George W. Bush at a reception in honor of the Points of Light Institute at the White House on Jan. 7, 2009.

The first Gulf War was a clear victory for U.S. forces. As commander in chief, George H.W. Bush saw his approval ratings soar to nearly 90 percent. His lock on a second term seemed so solid that many national Democrats opted to sit out the 1992 election, leaving it to the governor of a small Southern state to challenge him.

Bill Clinton of Arkansas had one big advantage, though: the economy, stupid. As the country sank into recession, Bush's popularity sank with it. There was no parachute or soft landing this time. He lost a three-way race in the November election, carrying just 38 percent of the vote.

More than two decades later, George W. Bush, who experienced his own roller-coaster ride in the polls, wrote an affectionate portrait of his father, titled 41.

"I want people to better appreciate George Bush, as not only a great person but a very successful president," the younger Bush said.

Bush was also the linchpin of a political dynasty that now spans four generations — including a second son, former Florida Gov. Jeb Bush, who ran for the White House and lost in the 2016 Republican primaries as Donald Trump became the dominant force in a GOP that had evolved far from where it was when the 41st president was in office.

Whatever the senior Bush's political shortcomings, hindsight has cast his presidency in a kinder, gentler light.

President Trump praised George H.W. Bush on Twitter as someone who "led a long, successful and beautiful life."

From 2014: George W. Bush On His Common Enemy With His Father, Saddam Hussein

"Whenever I was with him I saw his absolute joy for life and true pride in his family," Trump tweeted. "His accomplishments were great from beginning to end. He was a truly wonderful man and will be missed by all!"

The White House also issued a statement saying, "Melania and I join with a grieving Nation to mourn the loss of former President George H.W. Bush, who passed away last night."

The statement also referenced George H.W. Bush as a president who "guided our nation, and the world, to a peaceful and victorious conclusion of the Cold War."

But to one admittedly biased observer, the elder Bush has always been shortchanged.

"As a result of him being a one-term president, historians hadn't paid much attention to him," George W. Bush told NPR in a 2014 interview. He called his father "one of the greatest one-term presidents in the nation's history."

A caption in an earlier version of the photo slideshow incorrectly said former President George H.W. Bush served in the U.S. Navy from 1943 to 1945. He enlisted in 1942.