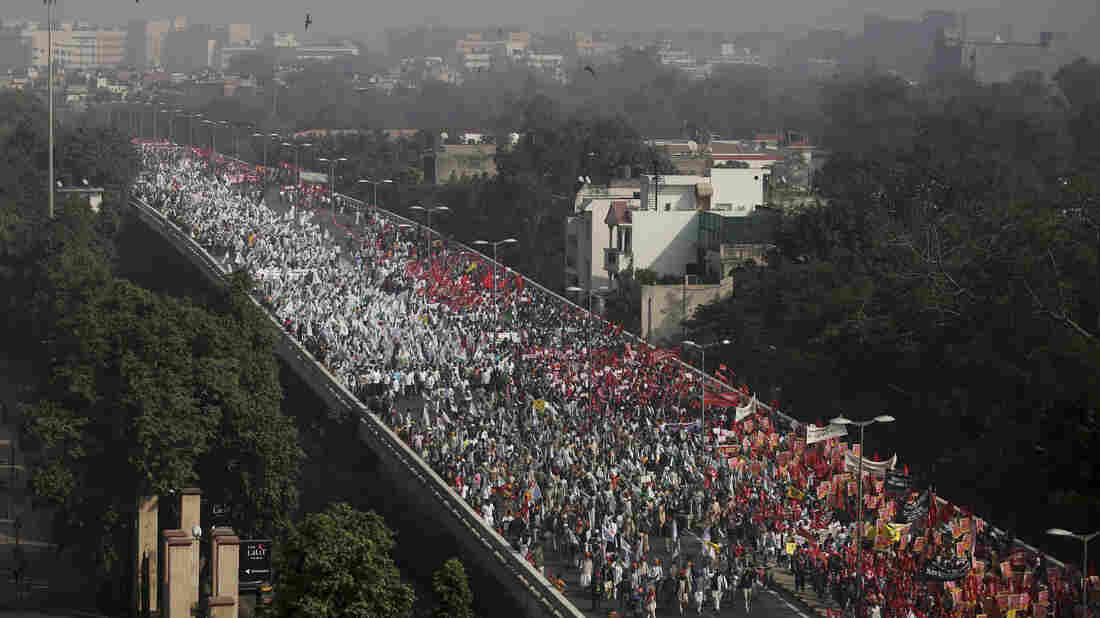 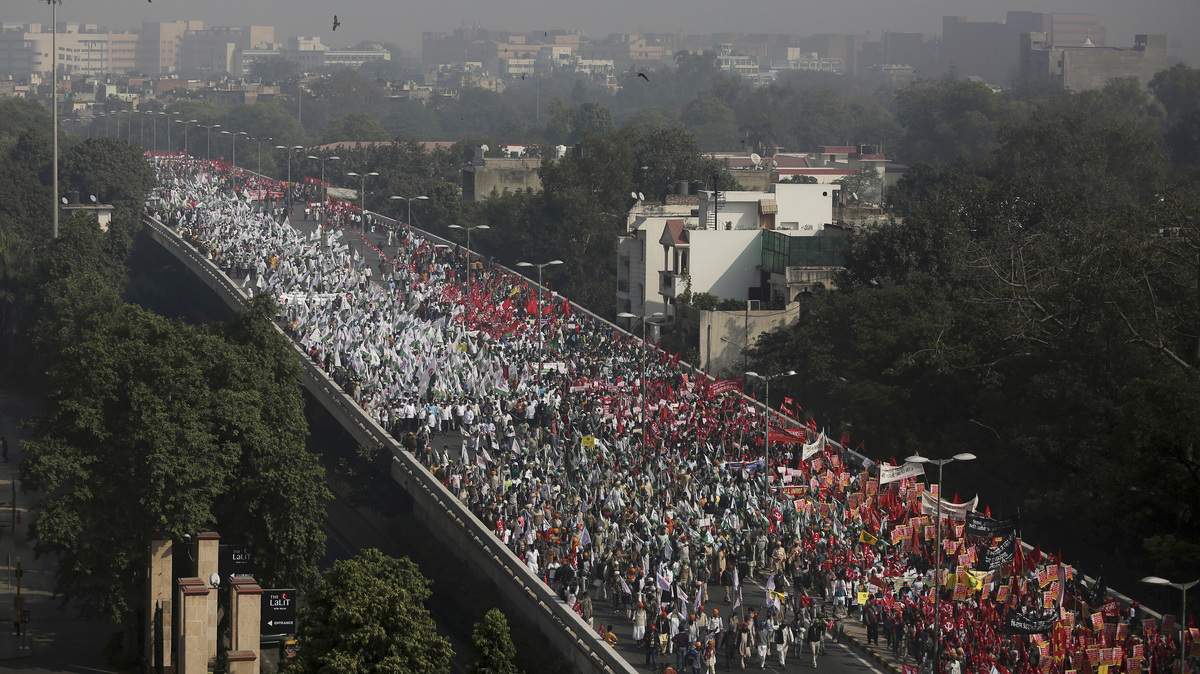 Indian farmers and agricultural laborers march towards the Indian Parliament during a protest rally in New Delhi, India, on Friday.

Tens of thousands of farmers from across India took to streets of the capital on Friday, demanding relief from debt, higher prices for their produce and a special session of parliament dedicated to their needs.

Friday's rally in New Delhi may be the biggest demonstration so far of frustration with Prime Minister Narendra Modi and his ruling Bharatiya Janata Party, or BJP. The farmers want Modi to intervene and forgive some of their government loans.

"Down with Modi!" thousands chanted.

India's agriculture sector employs nearly half of India's 1.3 billion people, but it makes up only about 15 percent of the country's economy. Low food prices have depressed rural incomes and farmers are frustrated. They remain a huge voting bloc, and elections are coming in early 2019.

The government of India provides some crop subsidies, but farmers say it's not enough.

In trains and tractors, as many as 100,000 farmers, according to Indian media estimates, arrived in the capital Thursday night. Around 3,500 extra security personnel are deployed along the march route, which winds through the city center. Police held back traffic as protesting farmers filled six-lane thoroughfares. 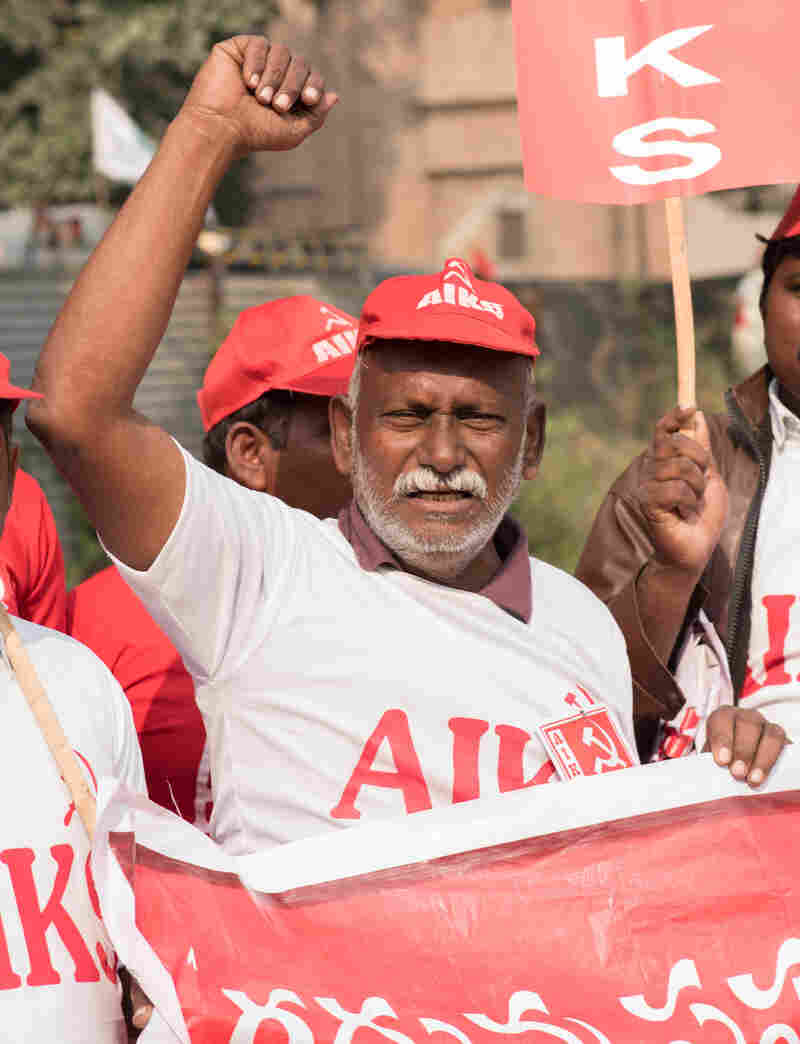 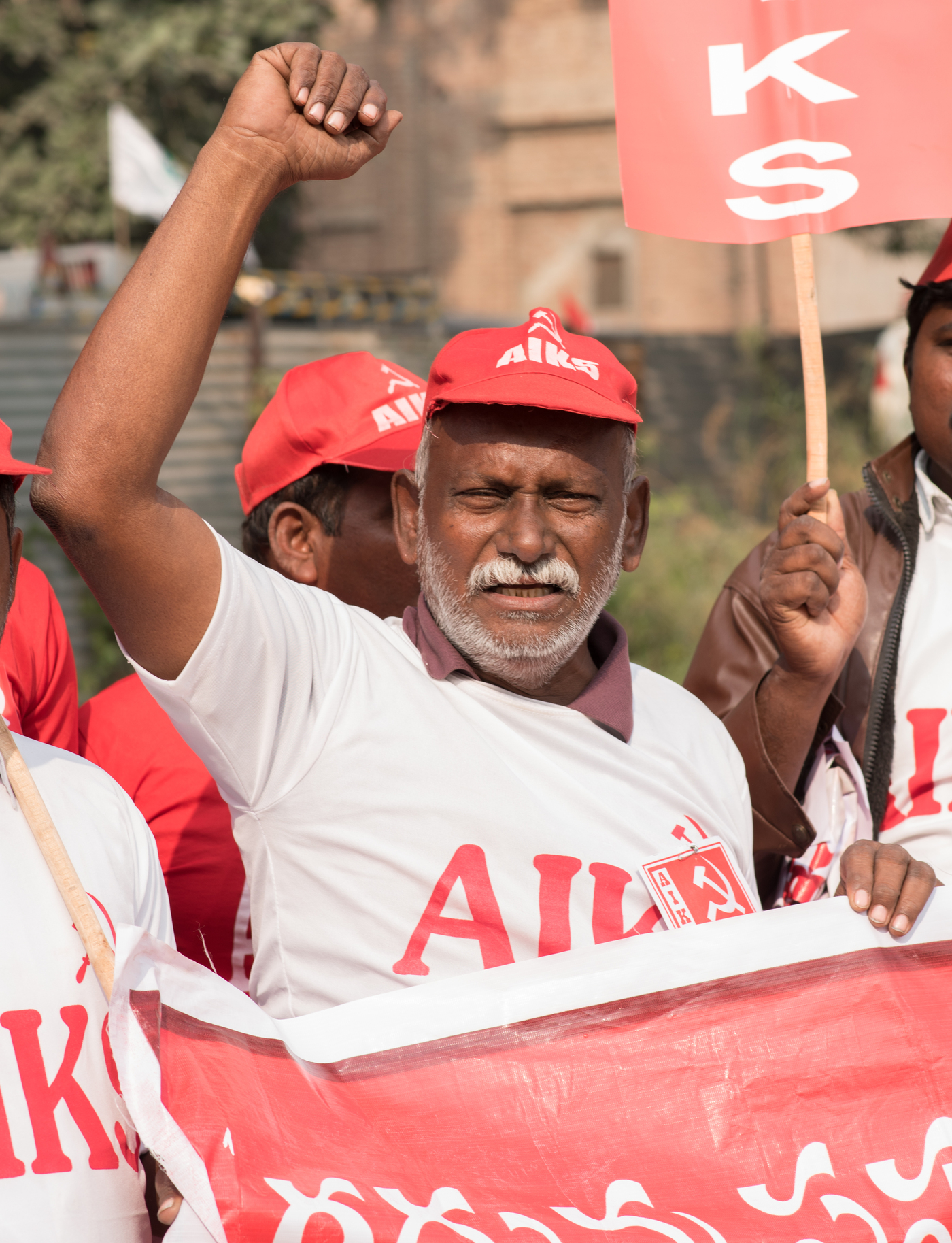 The crowd is made up of more than 200 farmer groups created after police shot to death six farmers at a similar protest in 2017, in the Indian state of Madhya Pradesh.

In New Delhi on Friday, students and doctors set up medical checkpoints along the route, distributing food and water. One of the trending hashtags on Twitter is #MarchWithFarmers. There's also a website for participants, called Dilli Chalo, or "Let's go to Delhi."

Modi has promised to support farmers, and insists they get a fair deal under his BJP rule. He has also accused opposition parties of using the farmers' plight for political gain.

But in the lead-up to next year's elections, Modi has been more vocal about causes dear to his nationalist base, such as protecting Hindu holy sites, including one at the city of Ayodhya that has been the focus of tensions between Hindus and Muslims for decades. In 1992, Hindu extremists demolished a 16th-century mosque there, sparking riots that left thousands of people, mostly Muslims, dead.

Modi has vowed to build a Hindu temple on the site.

On Thursday night, some farmers chanted "Ayodhya nahi, karz Maafi!" — which in Hindi means "Not Ayodhya, we want loan waivers." 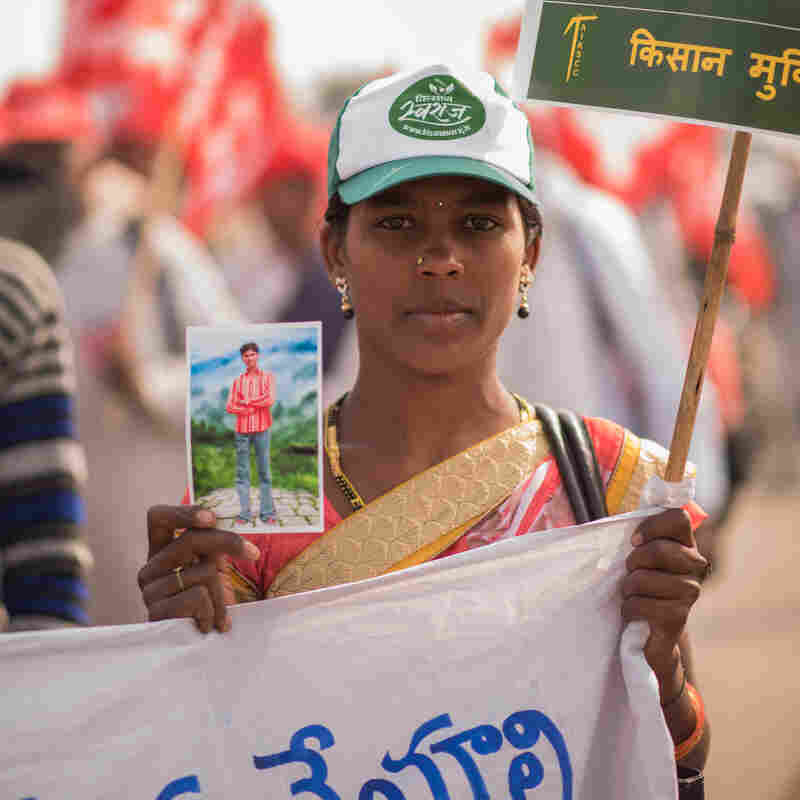 Surya Raga, a cotton farmer from Telangana, holding her husband's photo. He killed himself in 2014, after being unable to repay his loans. Furkan Latif Khan/NPR hide caption 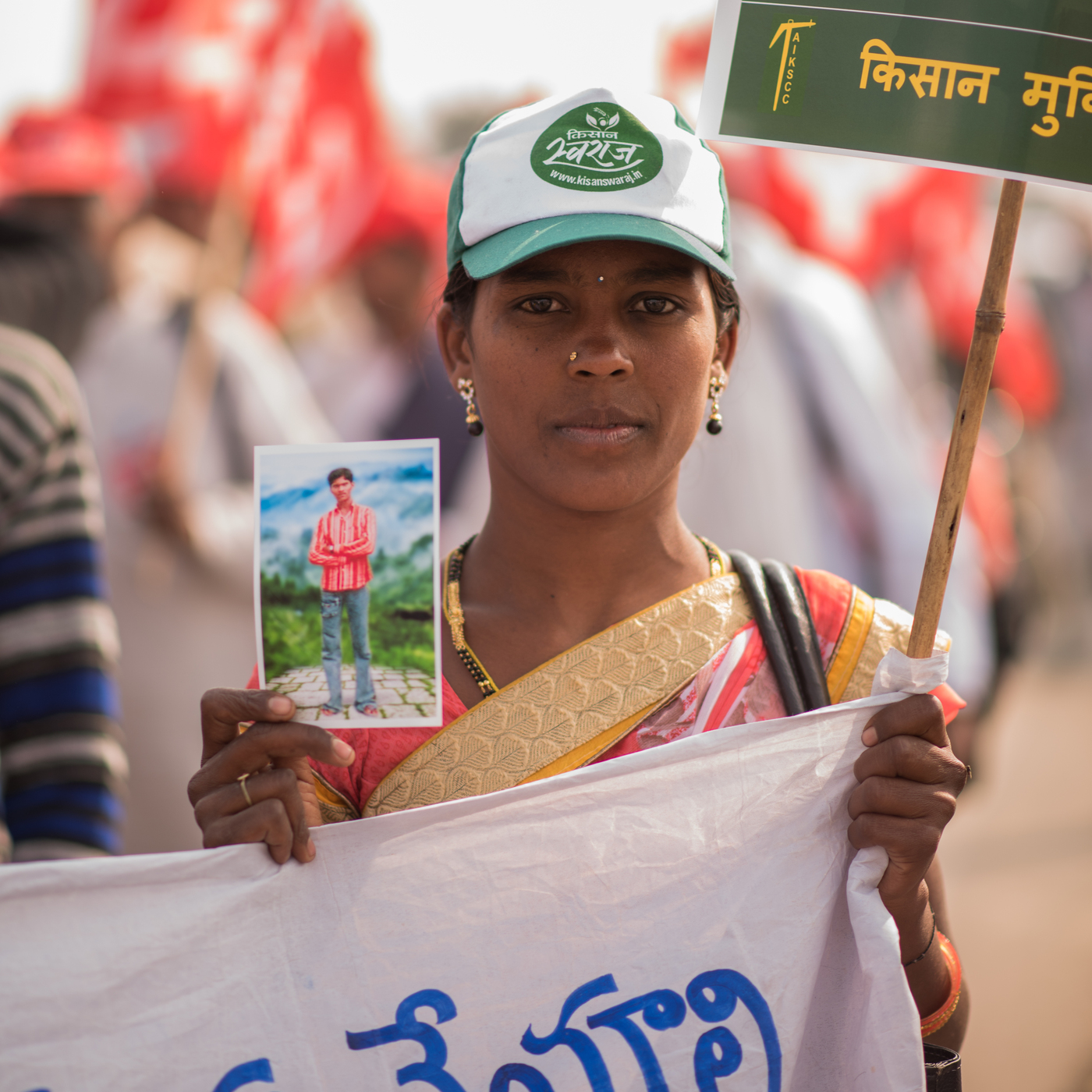 Surya Raga, a cotton farmer from Telangana, holding her husband's photo. He killed himself in 2014, after being unable to repay his loans.

Some protesters carried skulls and bones they said were from farmers who had killed themselves in desperation. A handful of farmers stripped naked and laid down in front of TV cameras, to draw attention to their cause.

For India's farmers, debt can be deadly. Since 2013, some 12,000 farmers have killed themselves each year, according to a report submitted to India's Supreme Court last year.

Women Are Not 'Chattel,' Says India's Supreme Court In Striking Down Adultery Law

"I hope the government helps me, so I can help my son to grow up," says Surya Raga, a cotton farmer who traveled to Delhi from the southern Indian state of Telangana.

Raga was marching with a photograph of her deceased husband. In 2014, he took his own life after being unable to pay back a government loan of about $4,300 dollars. With her husband dead, and Raga having taken over his farming duties, she wants the loan forgiven. She was marching with a group of women farmers who've all lost family members to suicide sparked by farming debt.

India's government has pledged debt relief in cases of drought or natural disaster. But farmers say it's been slow to arrive.

"We are suffering a lot. There is no drinking water even 1,000 feet under the ground," says Galli Venkatrao Reddy, a chili pepper farmer from the state of Andhra Pradesh whose crops have been been hit by drought. "We want the government to immediately send us some relief."

Reddy believes he is entitled to a drought relief package from his state government, but he says it hasn't come. He traveled more than 1,200 miles to Delhi, with his wife and eleven other farmers from his region.

Various politicians waded into the farmers' crowd, pledging to help them. The leader of the opposition Congress party, Rahul Gandhi, was expected to be at the rally later Friday. Modi was unable to attend, because he is in Argentina for the G20 summit.

The mass rally on Friday marks the second time farmers have marched on the capital in recent weeks. The last time, on Oct. 2, they were met by police with water cannons and tear gas. Dozens of farmers were injured in clashes.

Indian farmers' complaints are longstanding. The biggest government effort to help them came in 2004, with a national commission that issued five reports on how to help Indians working in agriculture.

But advocates for farmers say the recommendations have never been addressed.

"In 14 years, Parliament has not found the time to have a discussion on those reports," says P. Sainath, founder of the People's Archive of Rural India, which publishes reports about farmers and supports their efforts to organize. "But when it comes to the interests of corporations, they'll hold a special session of parliament at midnight."