Accessibility links
What 'The Front Runner' And Gary Hart Tell Us About Political Theater Today Matt Bai and Jay Carson wrote the screenplay of a new drama about the swift 1987 downfall of the Democratic presidential candidate — an event Bai says has a "direct throughline" to President Trump. 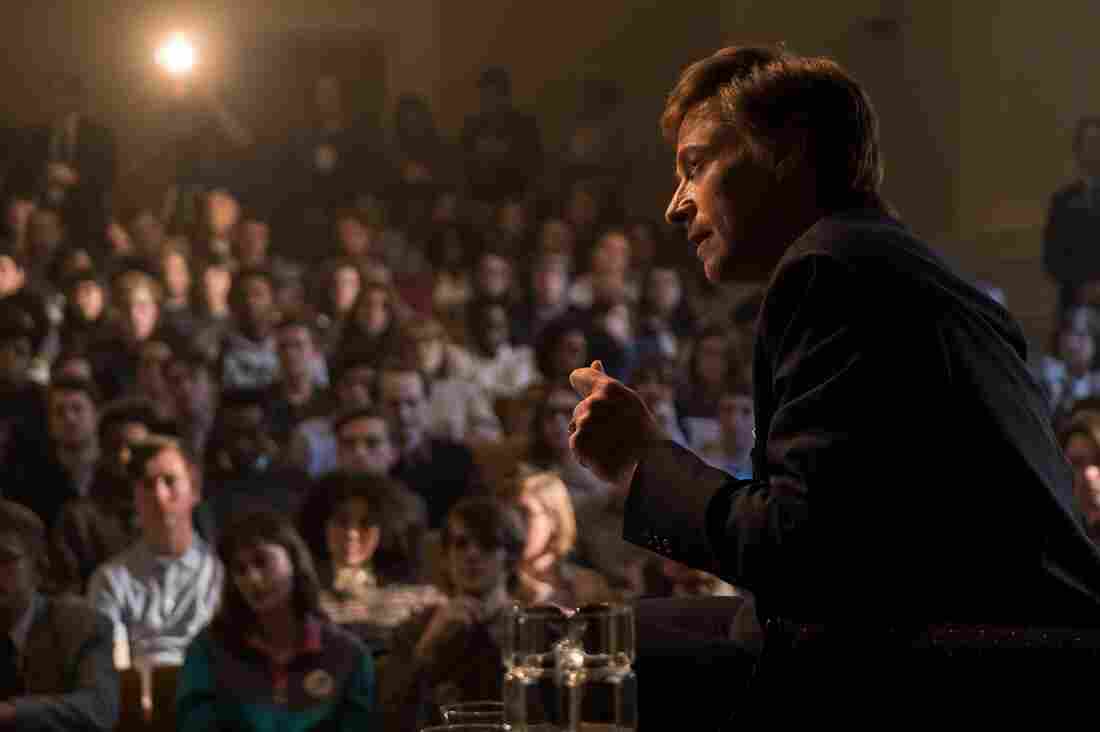 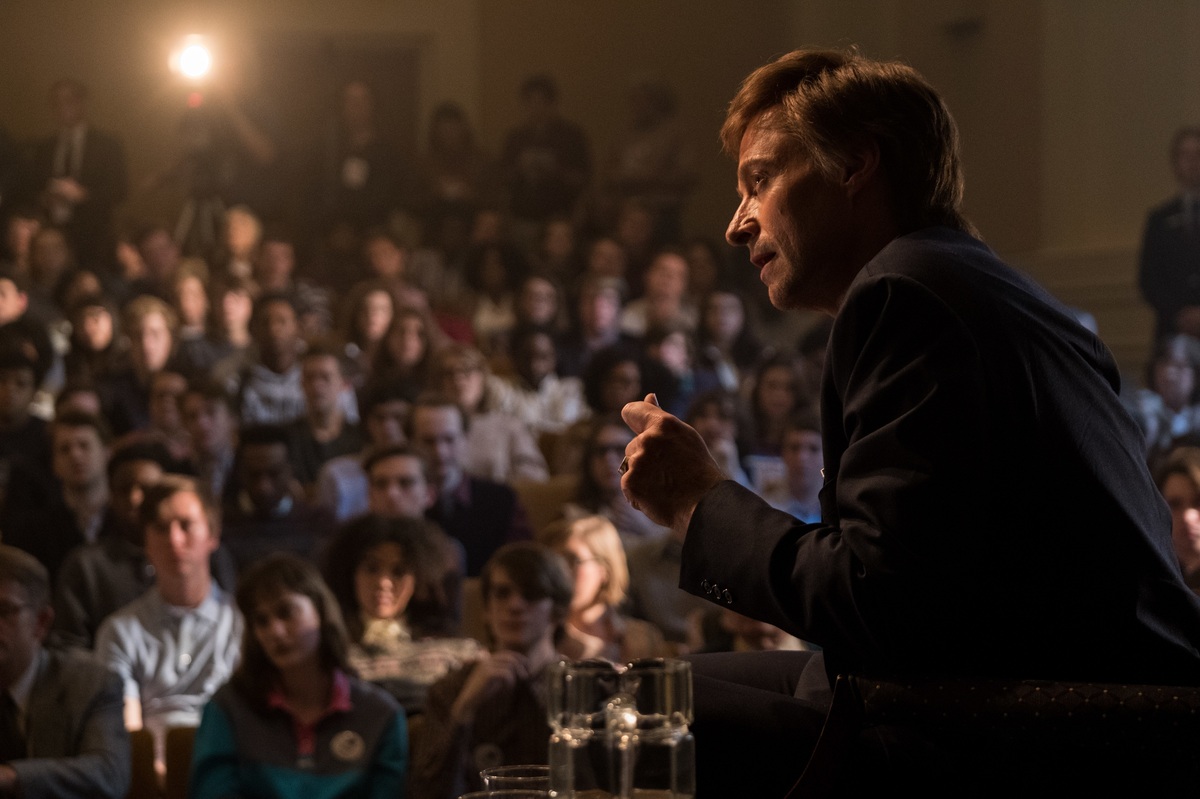 In The Front Runner, Hugh Jackman plays Gary Hart, whose 1987 presidential campaign was swiftly derailed by reports of an extramarital affair.

Today, there's a playbook for surviving a political sex scandal.

"In a campaign when something like this happens, you 'apologize,' I say with airquotes," says Jay Carson, a former Democratic political operative. "Because you're sorry that you got caught — you're not really sorry."

"You talk your family into standing — your family who you have hurt so personally and so publicly — you force to go out and handle this publicly, to stand by you publicly to help you out, to help you get to your end goal, which is to get that higher office, to become that governor, to become that president," he says. "As we've progressed in politics, you've gotten to a place where you pay people off, you you're your attorney try to silence people, big fat checks show up in places — hell, there's a whole FBI investigation going on along these lines. You basically do whatever it takes to get through the scandal."

Political journalist Matt Bai is well-versed in what happens when a politician doesn't know the playbook — or doesn't care for it — and watches his political fortunes die as a result. Bai wrote the book All The Truth Is Out about the presidential candidate Gary Hart. Along with Jay Carson, Bai also co-wrote the screenplay for The Front Runner — the new film based on Hart's story.

Hart, a Colorado senator, sought the Democratic nomination in 1987. He was undone in weeks after the Miami Herald sent reporters to stake out his Washington townhouse to confirm allegations of an extramarital affair.

The Front Runner unpacks how and why a political press that had once turned a blind eye to such stories came down on Hart. When the real Gary Hart withdrew from the race, he was furious with the press, and said as much in a speech.

We're all going to have to seriously question the system for selecting our national leaders, that reduces the press of this nation to hunters and presidential candidates to being hunted; that has reporters in bushes, false and inaccurate stories printed, photographers peeking in our windows, swarms of helicopters hovering over our roof, and my very strong wife close to tears because she can't even get in her own house at night without being harassed. And then after all that, ponderous pundits wonder in mock seriousness why some of the best people in this country choose not to run for high office. ... Politics in this country — take it from me — is on the verge of becoming another form of athletic competition or sporting match. We all better do something to make this system work, or we're all going to be soon rephrasing Jefferson to say, "I tremble for my country when I think we may, in fact, get the kind of leaders we deserve."

"When I heard that and saw that speech — which you can, you know, Google, it's on C-SPAN — I knew I wanted to write a book, because I thought it was one of the most important speeches ever forgotten," Bai says.

Earlier this week I sat down with Matt Bai and Jay Carson at NPR headquarters in front of a live audience. In this part of our conversation, I wanted to understand why this story still matters in 2018. 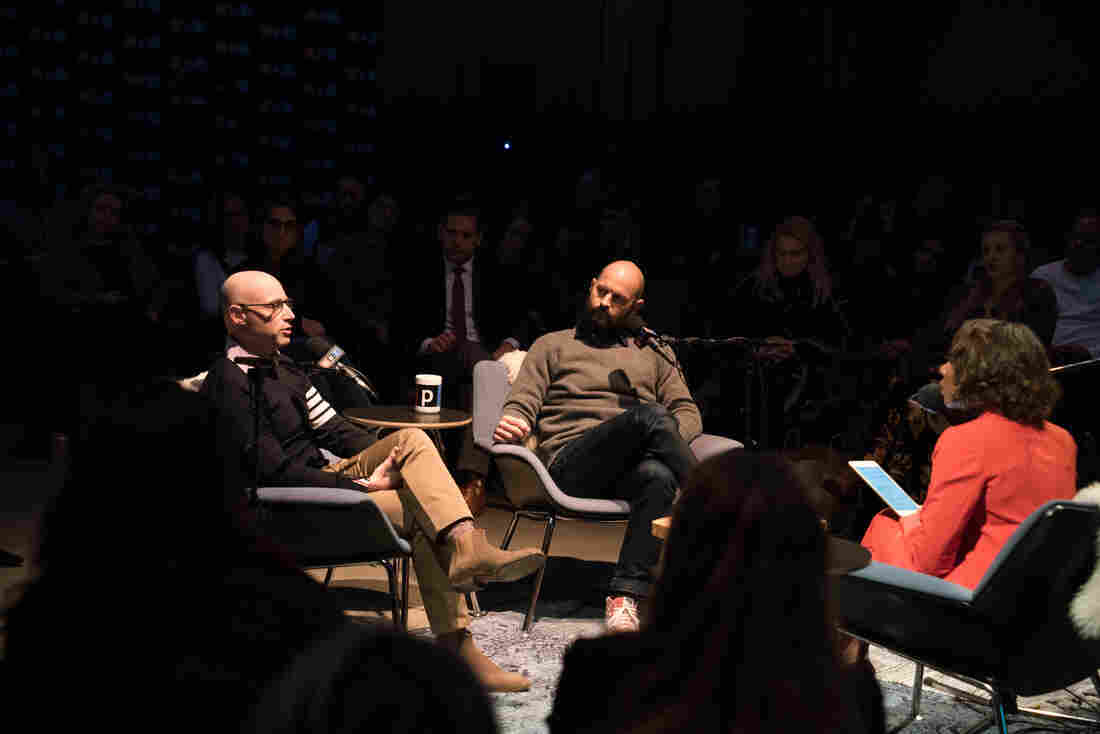 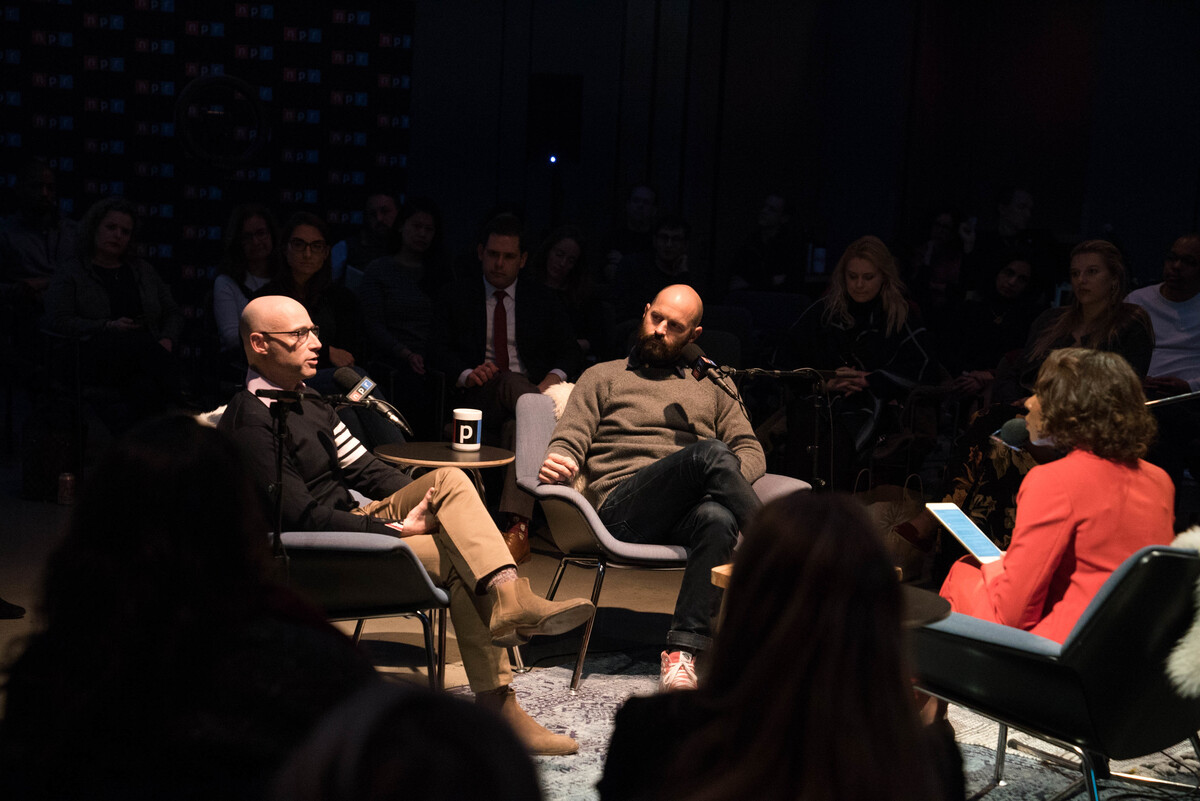 Matt Bai (left) and Jay Carson spoke with NPR's Audie Cornish in front of a live audience at NPR headquarters in Washington, D.C.

Bai: There's a direct throughline between what occurred in that moment in 1987 that we show here — the collision of entertainment and politics — and the process we created afterward, that attracts entertainers and performers. When you create a process of politics that is more like entertainment, you will draw entertainers into your politics. And that's what it will become. And that's where we are.

Cornish: Can I ask about President Trump in this moment? 'Cause he seems to sit at that nexus in a way, between a Hollywood figure and now, a political figure. Why is he immune to scandal?

Bai: This is an excellent question, Audie. I mean, this is the whole crux of the thing, right?

Carson: It really is.

Bai: Your political process that you create doesn't just affect your campaigns. The process determines who you get and therefore how you're governed. The process creates the kind of leaders you get. This was the point Hart was making in '87. We created a process that treats politicians like entertainers and celebrities, and we have attracted celebrities and entertainers and performers to that process.

That means two things, I think, that answers your question. One, he's [Trump is] shameless. What we have learned is that people who are primarily concerned about the entertainment — and who will just lie, or do anything to evade, or disclose anything about themselves or their family, or who enjoy the publicity, no matter what the publicity says about them — if you just plow forward and endure, you can get by, 'cause there's another story 10 minutes later. Those are the people we consider politically skilled, right?

The other part of it is: I just don't think, fundamentally, the public judges President Trump as a politician. I think he is judged as an entertainer, and those are different things. Entertainers reinvent themselves all the time. They say one thing one day and one thing the next. They're not flip-floppers — they're just reinventing. They have celebrity divorces more often than they have celebrity marriages, right? They, this is a—

Cornish: But this is also a process that produced a Barack Obama. These are very different politicians.

Bai: Yes, but Obama is a special case, because — yeah, he's probably the most like Hart in terms of personality of politicians I've known; there are a lot of similarities between them. But this no-drama Obama thing, that he's separate from the entertainment culture, is completely false. Barack Obama's candidacy would not have been viable in an era where substance and resume were the precursors to being able to run. He was a story. He ran as the central character in a narrative about America — of America overcoming the past, turning the page. He was a classic movie hero, and very much more of a celebrity when he ran than he was a politician. He'd only been a politician for several years. It was an entirely entertainment-age kind of candidacy. He happened to be, I think, temperamentally and intellectually suited for the job. But that was happenstance.

Cornish: Incidental to this. And in the case of Trump, why is one of them just completely — every little lesson we've talked about [that] Gary Hart had to learn, doesn't apply.

Carson: We elect people based on their performative ability, not their ability to do the job. Every now and then, we incidentally elect a performer (Bill Clinton, Barack Obama) who've thought about how to do the job, and have the intellectual capacity to do it, and show up and do a pretty good job, both of them. More often than not, I think, we're going to — because that's not No. 1 on our list — more often than not we're going to end up with dunces who've never thought about it, and are going to do a pretty horrible job of being the president, because that's not what we prioritize in our election process.

Bai: And by the way, Audie, I mean ... the reason this story matters, the reason this movie matters and resonates, is that there are things that happened in the crucible of 1987 that reverberate in our politics and create a process that takes us to today. We're not at the end of that continuum. I don't believe — as a political writer, as an observer of the culture — that Donald Trump is the end of entertainers in our politics. We will never have another fully traditional field of presidential candidates. You watch 2020 in the Democratic party. We will never have a field of insiders. We will never be free of — there are corporate titans and athletes and rock stars and entertainers who are looking at this process and saying, "I can do what Donald Trump did." We are nowhere near the end result of what began in that moment of when the worlds of politics and entertainment collided and became inextricably linked.

Bilal Qureshi, Joanna Pawlowska, Matt Ozug and Jessica Smith produced and edited this interview for broadcast. Patrick Jarenwattananon adapted it for the Web.