Accessibility links
Know Your Washington Buzzwords Deficit? Debt? Shutdown? Debt ceiling? NPR offers a guide to some of the political and economic terms you're likely to hear. 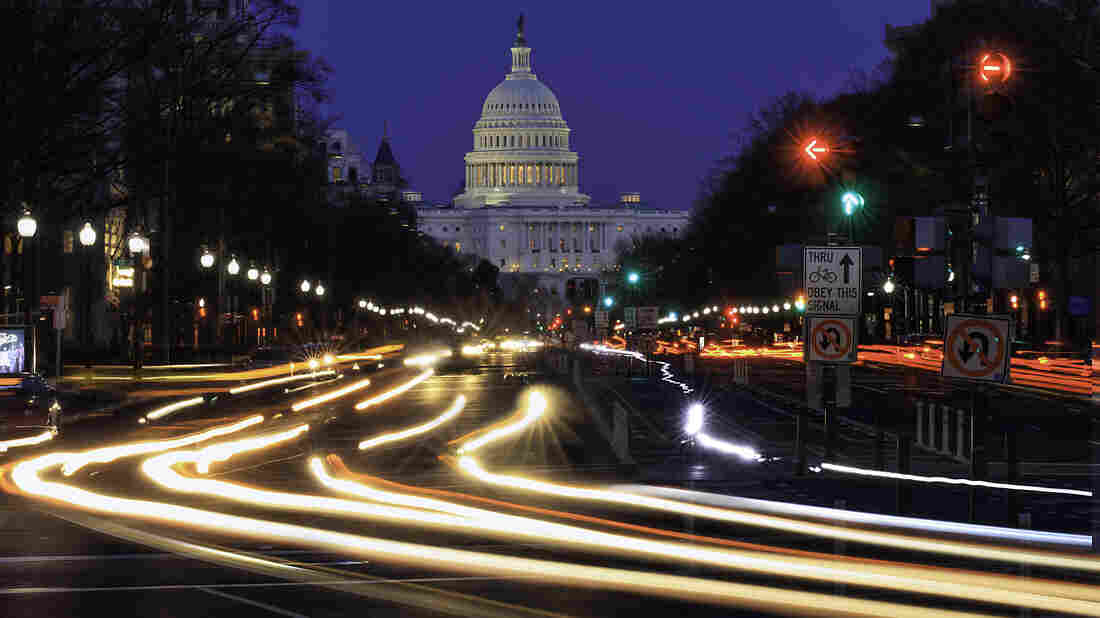 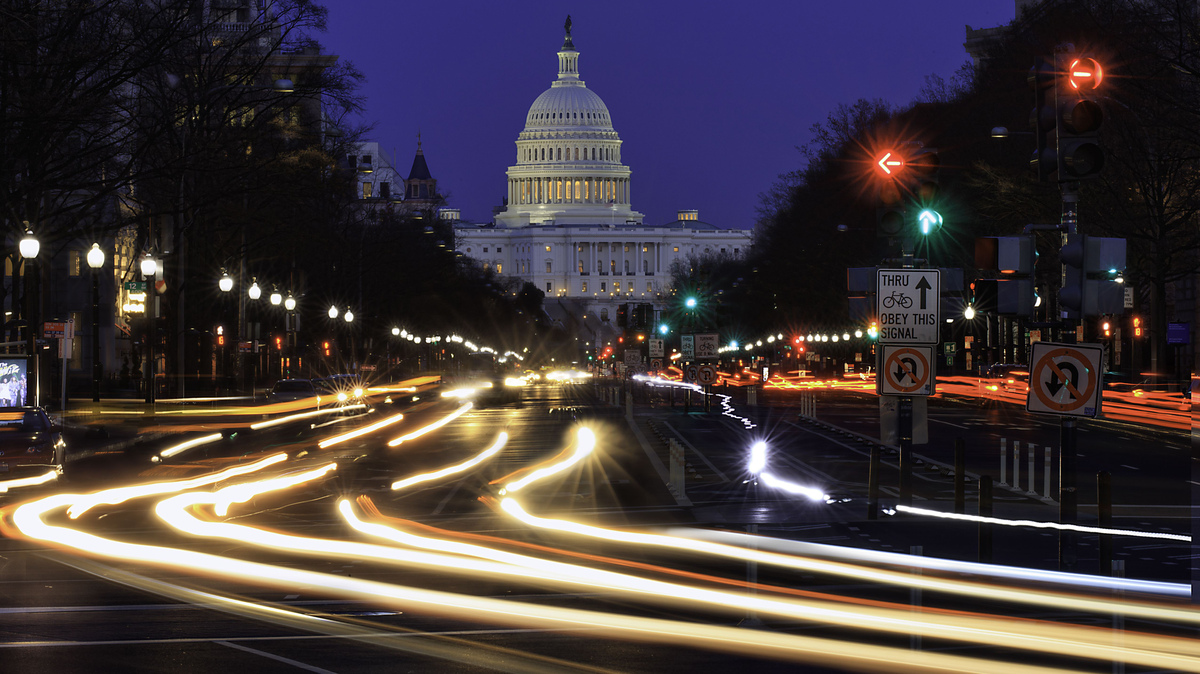 A view of Pennsylvania Ave. approaching the U.S. Capitol in Washington, D.C.

As Congress prepares to debate a year-end spending bill and President Trump prepares for trade talks with China's President Xi Jinping, these are some terms you're likely to hear used — and occasionally misused — by politicians and pundits. Bone up on your political and economic vocabulary so you'll sound smart on the holiday party circuit.

When the federal government spends more than it collects in taxes, which it does most years, it has to borrow money to make up the difference. That gap is the federal deficit. (When the government collects more than it spends, that's called a "surplus," but don't worry. That's not a term you're likely to hear very often.)

The deficit has been growing rapidly as a result of increased spending on the military and domestic programs as well as the 2017 tax cut, which ate into government revenues. Red ink is expected to top $1 trillion in the 2019 fiscal year. That's unusual at a time when the economy is growing and the country is not mired in a widespread war. Ordinarily, deficits shrink in good times and grow during recessions.

Debt is not necessarily bad. It can reflect productive investments by the government, just as a household might borrow to buy a home or fund a college education. But with debt comes the obligation to make interest payments. And as this interest obligation grows — as a result of rising debt and/or rising interest rates — it limits the government's ability to spend on other needs and wants. If the government's debt grows large enough, its demand for borrowed money can also "crowd out" private borrowers, making it more expensive for families and businesses to find the money they need to finance their own investments.

If a country imports more than it exports, that difference is called the trade deficit. If a country sells more to other countries than it buys from those countries, that's called a trade surplus.

The United States typically runs a trade deficit in goods and a trade surplus in services. In 2017, for example, Americans bought $807 billion more goods from other countries than we sold to other countries. But foreigners bought $255 billion more services from Americans than we bought from them. The combined trade deficit in goods and services was thus $552 billion — the goods deficit minus the services surplus. (President Trump sometimes ignores the trade surplus in services to focus on the goods deficit alone.)

In the first nine months of 2018, the trade deficit grew by 10 percent, as growth in imports outpaced growth in exports. Most economists don't see that as a problem.

Each year, Congress has to authorize spending for much of the federal government. Sometimes, lawmakers have difficulty reaching consensus in time, and the spending authorization lapses. Government employees used to ignore those congressional squabbles and keep working as usual. But during the Carter administration, Attorney General Benjamin Civiletti issued a legal opinion saying work could not continue in the absence of congressional authorization. That was the beginning of the "government shutdown."

The term itself is something of an exaggeration, since essential government workers (such as air traffic controllers and Border Patrol agents) keep doing their jobs. And major government programs like Social Security don't require annual authorization, so benefits keep going out (although new claims may not be processed).

But some popular and highly visible government functions may be shut down, increasing pressure on lawmakers to cut a deal. (Depending on which party controls the executive branch, there are opportunities to maximize or minimize the effects of a government shutdown.) Some federal workers may not be paid during a shutdown, although Congress typically authorizes back pay when a shutdown ends — making this a costly exercise in political theater. 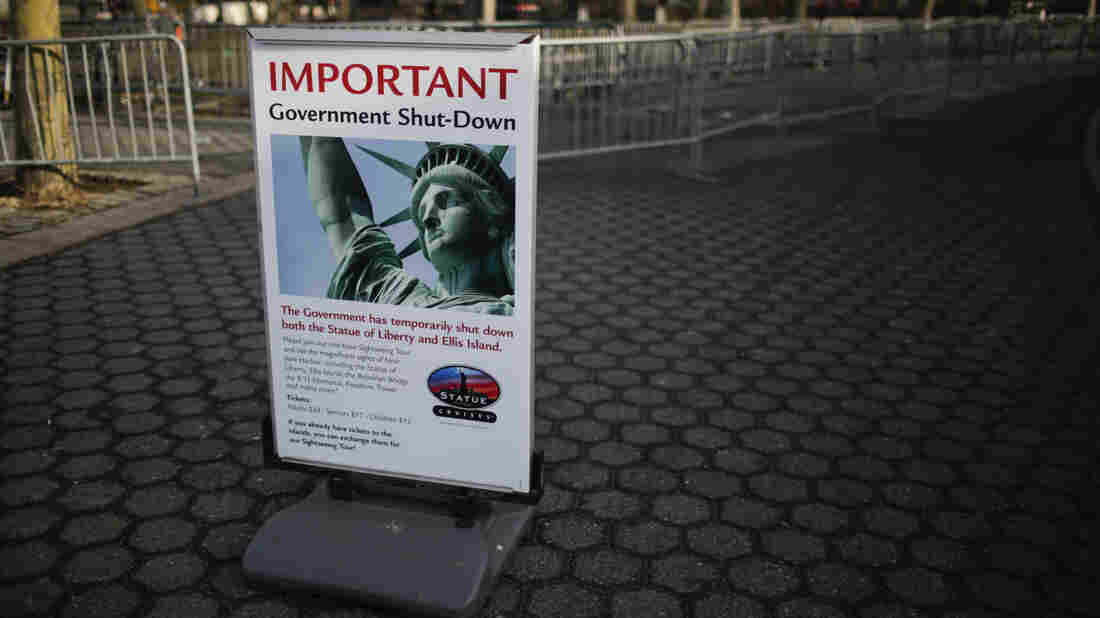 A shutdown placard is seen at the entrance of the Liberty State ferry terminal in Battery Park on January 21, 2018, in New York City. Eduardo Munoz Alvarez/Getty Images hide caption 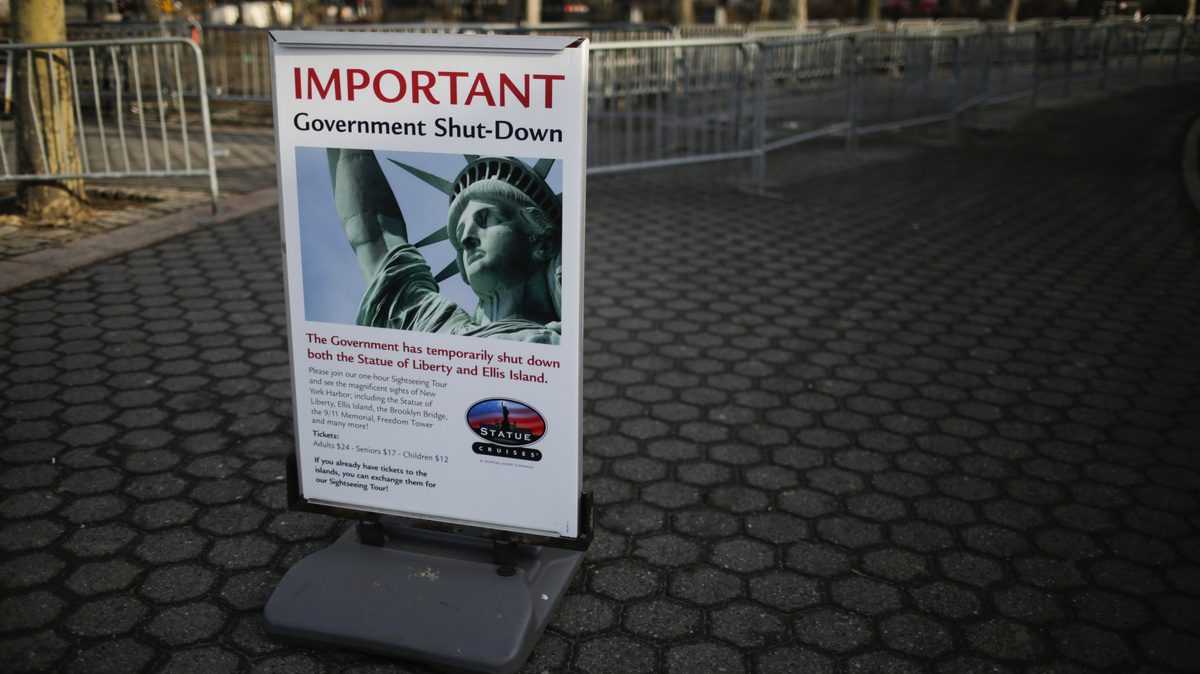 A shutdown placard is seen at the entrance of the Liberty State ferry terminal in Battery Park on January 21, 2018, in New York City.

This year Congress has already authorized spending for some major parts of the government, including the Defense Department, the VA and the Department of Health and Human Services. So those agencies are not subject to a government shutdown, if one occurs. Other departments and agencies could be affected, however, including the departments of Commerce, Justice, State, Transportation, Agriculture, Interior, HUD and the EPA.

The debt ceiling is a relic of World War I, when Congress set a limit on the federal government's overall authority to borrow money. Note that it doesn't limit the government's ability to spend money or require the government to collect more in taxes when spending outstrips revenue.

In the century since, Congress has repeatedly raised the debt ceiling to accommodate growing debt, like a frustrated dieter who keeps buying bigger belts. The debt ceiling has generally not caused lenders to question the federal government's willingness to repay what it owes, although a drawn out fight over raising the debt ceiling in 2011 prompted one credit rating agency to sound the alarm. The debt ceiling has been temporarily suspended but is due to go back into force in March 2019.