Accessibility links
Amid Fraud Allegations, North Carolina Election Board Won't Certify House Race In question are thousands of absentee ballots that were never mailed back, largely affecting black and American Indian voters. The board cited "claims of irregularities and fraudulent activities." 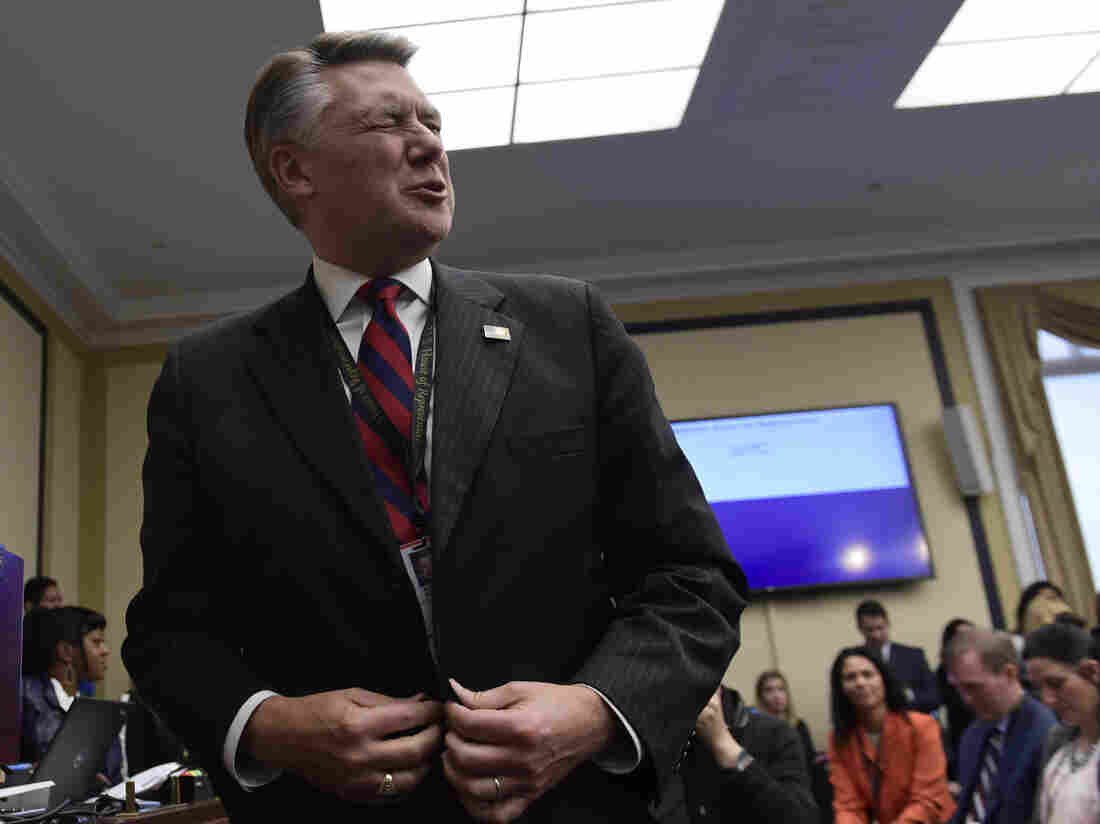 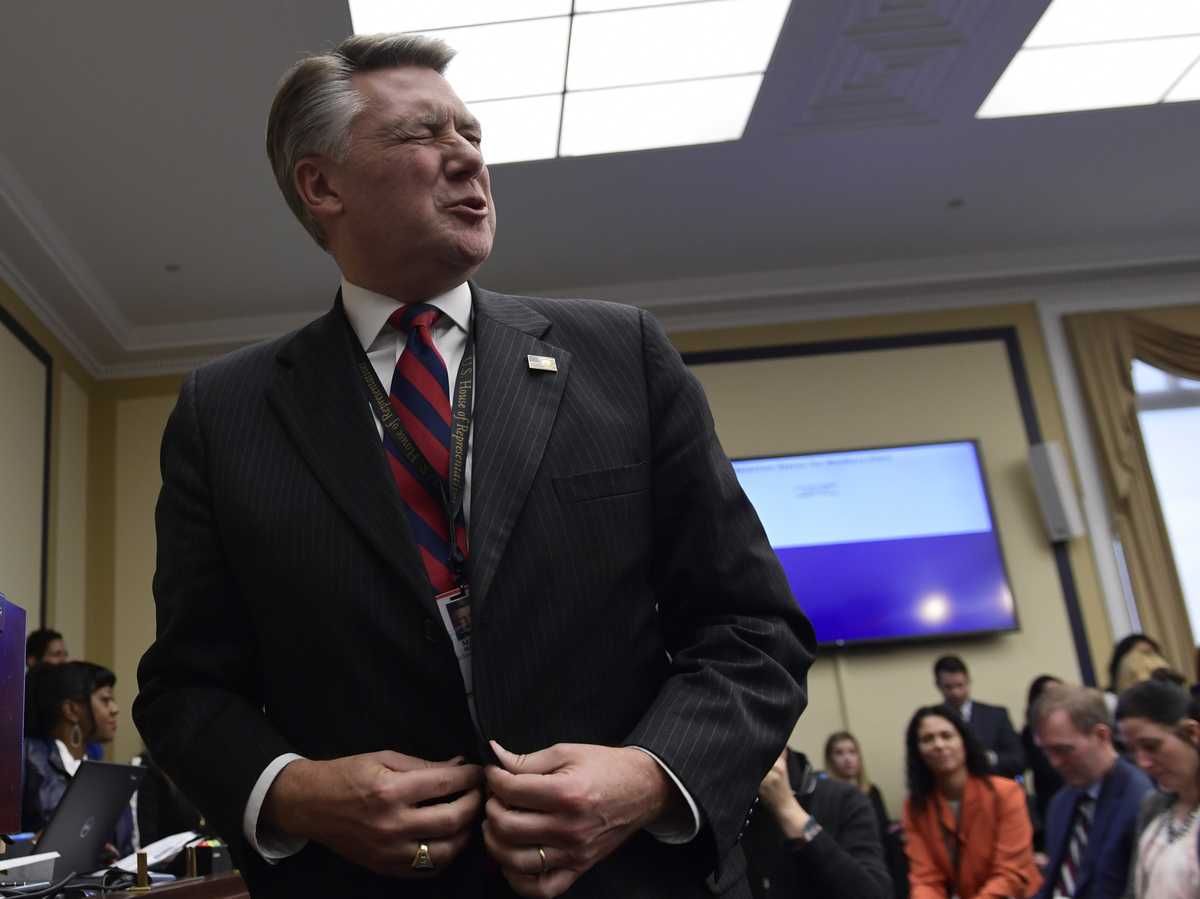 North Carolina Republican Mark Harris leads Democrat Dan McCready by more than 900 votes, but the state election board has delayed certifying his electoral victory in the 9th Congressional District race.

Enough confusion has clouded a North Carolina congressional race that the state's board of elections has announced a delay in certifying that Republican Mark Harris defeated Democrat Dan McCready in the state's 9th District because of "claims of irregularities and fraudulent activities."

In a 7-2 vote on Friday, the board said it will instead hold a public hearing by Dec. 21 "to assure that the election is determined without taint of fraud or corruption and without irregularities that may have changed the result." It follows a unanimous vote earlier this week to postpone election certification results.

The Friday vote fueled fresh uncertainty about the outcome of the race and raised the possibility that a second election could be called. The two candidates are separated by 905 votes out of more than 280,000 cast, according to unofficial election results. The Associated Press originally called the race for Harris but revoked that projection on Friday.

In a letter sent to the board of elections, North Carolina's Democratic Party made claims of wrongdoing. The Washington Post reported that the State Board of Elections and Ethics Enforcement has already collected at least six sworn statements from voters in Bladen County alleging that people came to their doors and urged them to hand over their absentee ballots.

In Bladen and Robeson counties, some 3,400 absentee ballots failed to be mailed back to election officials, according to NPR member station WFAE.

That equates to 40 percent of mail-in ballots in Bladen County and 64 percent in Robeson, according to a Raleigh News & Observer analysis.

Gerry Cohen, an elections expert in North Carolina, told WFAE that when people go through the process to request an absentee ballot, they often return them. "The return rate is usually about 80 or 90 percent," he said.

November's unreturned ballots were disproportionately associated with minorities, according to The News & Observer:

In one affidavit received by the board, a woman named Emma Shipman said she was visited by a person who claimed to be gathering absentee ballots, WFAE reported.

Shipman said she filled out the form while the woman waited outside. "She took the ballot and put it in an envelope and never sealed it or asked me to sign it. Then she left."

Collecting absentee ballots by a third party is illegal. But, Shipman said, "Because of the way she presented herself, I thought she was legitimate."

"I respect today's decision by the bipartisan Board of Elections to delay certification of our election results until a full investigation is completed," Democratic candidate McCready said. He added, "Any effort to rob a person of that right should be met with the full force of justice."

Harris opposed the decision and said, "The State Board of Elections should act immediately to certify the race while continuing to conduct their investigation. Anything else is a disservice to the people of the Ninth District."

He said he supported efforts to investigate allegations of voter fraud, "as long as it is fair and focuses on all political parties." Harris said there were not enough ballots in question to affect the outcome of the race.

The board's decision triggered Dallas Woodhouse, executive director of the North Carolina Republican Party, to call for the Democratic chairman of the state election board to resign. He said that Andy Penry, the chairman, "has shown himself to be hyper-partisan" and that "no public evidence in #CD9 shows vote tampering and mathematically this could not have changed the race."

Penry resigned on Saturday, saying he did not want his partisan views to be used to undermine the investigation.

"The investigation of criminal conduct and absentee voting fraud in the 2018 Republican primary and 2018 general election in congressional District 9 is a matter of vital importance to our democracy," he wrote in a statement, according to The Washington Post. "I will not allow myself to be used as an instrument of distraction in this investigation."

The board convened for three hours on Friday by teleconference, WFAE reported. Two of four Republicans serving on the board — Ken Raymond and John Hemphill — voted against the delay. The other two, Stacy Eggers and John Lewis, voted in line with the Democrats.

The election board itself also faces uncertainty. A panel of three judges ruled in October that changes to the board introduced by the state's Republican-controlled General Assembly were unconstitutional. North Carolina's governor, Democrat Roy Cooper, said the changes were designed to erode his control of the board.

A stay in the ruling that permitted the board to operate was set to expire but has been extended. Harris filed a motion for the board to remain in existence until his race is certified.