Accessibility links
Tell Them Of 'Battles, Kings,' And Michelangelo On The Bosporus Mathias Énard's novel — newly translated from French — imagines what would have happened if Michelangelo had accepted an offer from the Ottoman ruler to design a bridge across the Golden Horn.

Tell Them Of 'Battles, Kings,' And Michelangelo On The Bosporus

Tell Them Of 'Battles, Kings,' And Michelangelo On The Bosporus 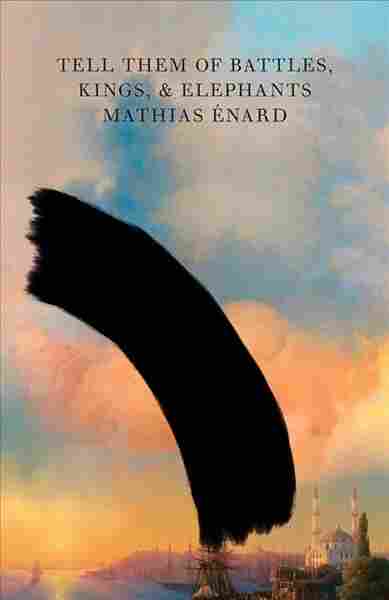 Tell Them of Battles, Kings, and Elephants

The story, according to legend, goes like this: In 1502, Sultan Bayezid II, ruler of the Ottoman Empire, summons Leonardo da Vinci to construct a bridge that would span the Golden Horn, an inlet between the Turkish cities of Pera and Constantinople (modern day Istanbul). Leonardo's proposed design would be the longest bridge in the world at that time. But the sultan rejects it, arguing that an arch of that size would surely collapse in the middle. Soon after, Michelangelo Buonarroti is invited to design the same bridge, but he declines the offer.

In Tell Them of Battles, Kings, and Elephants, Mathias Énard imagines what might have been had Michelangelo accepted. The novel, translated by Charlotte Mandell and originally published in 2010, is comprised of short, fragmented chapters. Compared to the author's 500-plus page, one-sentence-long novel Zone, it is a masterful exercise in brevity. It also kept me guessing, as it moves quickly from one scene to the next, never letting you get too comfortable in one place.

The year is 1506, and Michelangelo is young and highly renowned, most famous for his statue of David, which has made him a hero in Italy. One day, two Franciscan monks show up with a letter from the Sultan, asking that he submit drawings for the bridge. Overwhelmed by the scale of the task, Michelangelo turns the Franciscans away on three occasions, demanding that they give him time. He knows he is an artist of immense talent, but the magnitude of the project raises doubts in his mind about whether he is the right person to carry it out. "If the Sultan chose you, Maestro," one of the monks assures him, "that's because you are qualified."

At the time, Michelangelo is working for Pope Julius II, the warlike, authoritarian pontiff with whom he had a strained relationship. He is frustrated and bitter, feeling that Julius has treated him poorly — so much so that Michelangelo has found himself paying for supplies from his own pocket because of the Pope's cheapskate ways. Énard's engaging tone makes it easy to sympathize with the young artist's insecurities — as well as his growing ambition.

Soon Michelangelo finds out that the sultan has rejected drawings from da Vinci, more than 20 years his senior. The monk, perhaps unknowingly, finds just the right words to pique his interest: "You will surpass him in glory if you accept, for you will succeed where he has failed, and you will give the world a monument without equal ..."

He is immediately seized by the possibility of transcending a giant, and in turn, proving his own skill and superiority. What's more, the sultan offers Michelangelo five times what the Pope paid him for two years of work. And so he agrees, setting off on a six-day boat expedition to Constantinople.

Énard weaves an imaginative and suspenseful tale of civilizations and personalities clashing, of love, of being an artist in a violent era, of enthralling "what ifs."

Énard's descriptions consistently dazzle throughout this short book: "The perfume of rose and jasmine, augmented by evening, mingled with the sea air and the less poetic effluvia of the city." He has a knack for making seemingly mundane details feel meaningful — and I found myself rereading passages that, while simple on the surface, contain layers about his subject's character: "Michelangelo is afraid of love just as he's afraid of Hell."

Michelangelo sits around for three days, occasionally going for a walk but mostly drawing, waiting. When the time comes for him to get to work, he is provided with all he needs for the exercise of his art, from endless supplies to draftsmen and engineers and a large furnished studio. "Here are your kingdom and your subjects," one of his guides tells him. The people gaze at Michelangelo in awe, "the way one looks at a bomb whose fuse has been lit." But things soon take a turn, as pain, anger, and ultimately tragedy combine to thwart our hero's great plans.

Énard weaves an imaginative and suspenseful tale of civilizations and personalities clashing, of love, of being an artist in a violent era, of enthralling "what ifs," and of the figurative — and perhaps literal — burning of bridges and connections. As the novel is grounded in concrete facts, what I love best is how well Énard manages to blur the lines of truth and fiction. The book's afterword lists all the real-life texts, events, and people that feature in his story. In one of my favorite scenes of the book, a young translator calls one of Michelangelo's drawings a "miracle." "A miracle?" replies Michelangelo. "No, my friend. It's pure genius." Énard's prose is vivid and elliptical, and his novel, like the sculptor's intricate designs, is a true achievement in form.