Accessibility links
The Cost Of Being Queen: 'Mary' Explores The Sacrifices Of Women In Power Margot Robbie is Queen Elizabeth I in Mary Queen of Scots. "We re-examine history as a way of understanding what's happening in our present time, and where we're heading in the future," she says. 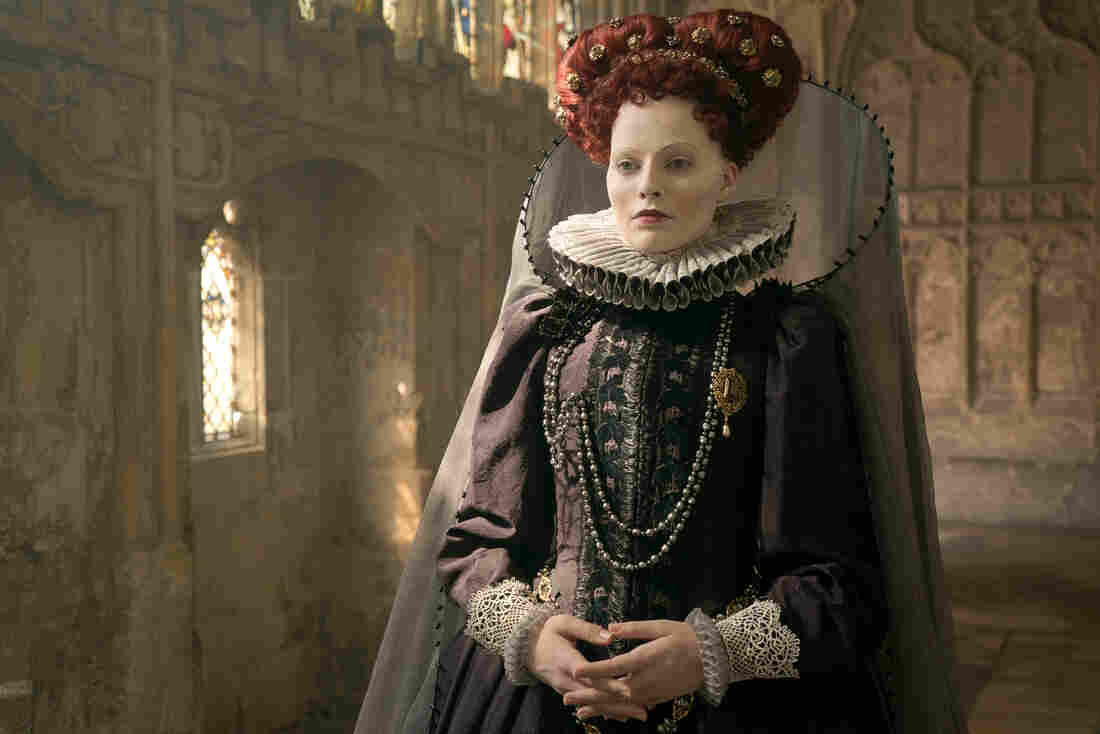 When she was first given the opportunity to play Queen Elizabeth I in the new film Mary Queen of Scots, Margot Robbie declined. "I found the prospect too intimidating," Robbie says. "I didn't really feel worthy." But after multiple conversations with director Josie Rourke, she changed her mind: "Eventually I was like, 'Look I trust you, I'm willing to give it a go,' " she recalls.

Much has been written about the relationship between Elizabeth I of England and Mary Stuart of Scotland — two queens ruling at the same time in rival, neighboring countries. The new film reinterprets that history in a feminist light.

"We re-examine history as a way of understanding what's happening in our present time, and where we're heading in the future ..." Robbie says. "That's the reason we've told stories since the beginning of time. ... Now, more than ever, the examination of what it's like to be a woman in charge and a woman in power is a very important thing to examine in our society."

There were a lot of things about Elizabeth I didn't understand when initially reading the script. And it wasn't until I went back and looked at her childhood and her adolescence that I finally understood why she would say something like "I am more man than woman" or why she would say ... something like "I know have a feeble body of a woman, but I have the heart and stomach of a man and a king." ...

Ever since birth she was a disappointment simply because of her sex. And then she had a very tricky time in her adolescence — by some historians' accounts she was actually abused and then was labeled a "harlot." ... Finding out these pieces of trauma in her childhood really helped me understand why later in life she said "I'm the Virgin Queen. I will not get married." It did help me understand this deep mistrust in men and why she so closely linked her survival with not getting married and not being in the vulnerable position of being controlled by another man.

On the relationship between Mary and Elizabeth

I feel like if they'd just caught up for a cup of coffee at the beginning, you know, maybe things would have really gone differently and they could have worked this all out. But there was just this constant interference and meddling by their male advisers around them ... they went to extraordinary lengths to keep these two queens apart.

But they had this bond, I think. I loved that Josie so wanted to lean into the sisterhood between them, because you read their letters between each other and they're very intimate. ... I think they really were the only two people that could understand what the other was going through in a way that no one else could.

On trying to portray Elizabeth as living vicariously through Mary

They ruled in two very different ways. I think Mary ruled with her heart and Elizabeth ruled with her head. And I think Elizabeth thought Mary's choice of course of action and her way of ruling was dangerous and risky and I think she feared it would ultimately lead to her demise. But at the same time, I think she admired her for it, and was almost envious that she herself didn't have it within her to rule in that way ... to live with her heart, and to marry, and have a child, and go to battle, and all those things that Mary did.

On Elizabeth's dramatic physical transformation over the course of the film

It was almost like a social experiment. ... Being on set in the different stages of hair and makeup depending on where we were in the story, it was fascinating to see how different everyone around me acted. I could walk to set, do a rehearsal, be chatting with everyone about the weekend ... and then come back in my full royal regalia and people would almost do a mini bow ... speaking to me totally differently. And then again when I had the smallpox makeup on people kind of avoided me a little bit. I think that they found it almost uncomfortable to be looking at me when the prosthetics looked so painful.

On the scene in which the queens meet

In real life Mary and Elizabeth by historical accounts never met. ... Saoirse [Ronan, who plays Mary] and I never saw each other in character until that moment with the cameras set up and it was incredibly moving. We just totally broke down. ... I was completely overwhelmed emotionally and I mean I could feel my whole body shaking and I was just sobbing and she was sobbing as well ... There was something so tragic and moving and intimate about it. It was a very strange and surreal moment.

I don't want people to think of them as rivals. I guess what I want modern audiences to take away is just the chance to kind of examine what it is like to be a woman in power and the cost of that — and realize that at the end of the day no matter what position you're in, we're all human, and we all we all feel basic human emotions.

Sarah Handel and Viet Le produced and edited this interview for broadcast. Beth Novey adapted it for the Web.