Accessibility links
French President Holds Security Meeting On Yellow Vest Protests The demonstrations have drawn hundreds of thousands of people across the country who say the cost of living in France has risen too high. 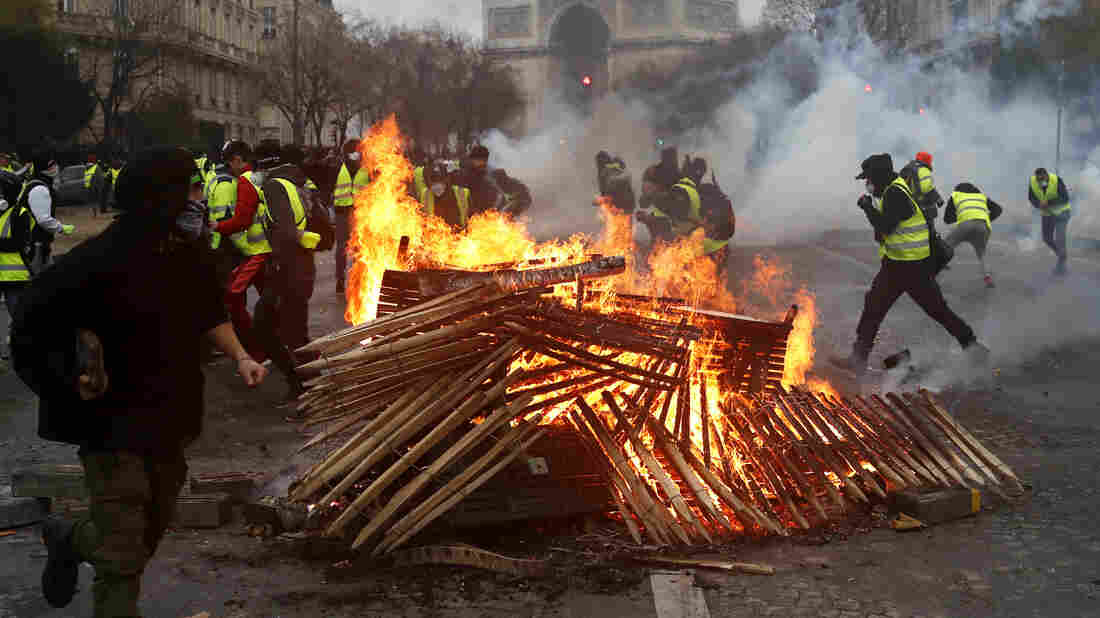 More than 350 people were arrested in demonstrations Saturday in Paris. The protests began on November 17th over a hike in gas prices. Thibault Camus/AP hide caption 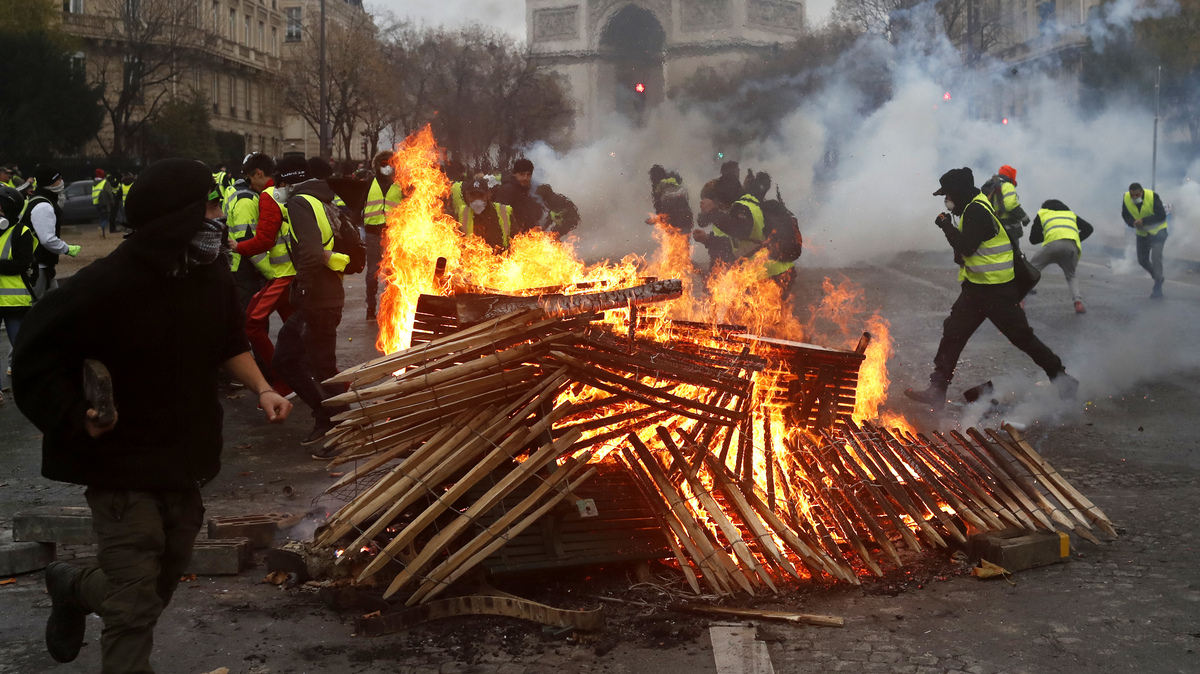 More than 350 people were arrested in demonstrations Saturday in Paris. The protests began on November 17th over a hike in gas prices.

French President Emmanuel Macron is chairing an urgent security meeting in Paris to discuss the riots that have spread across the country, and could declare a state of emergency to contain the unrest.

The "yellow vest" demonstrations, named for the roadside safety vests worn by the protesters, started last month over a hike in gas prices and have evolved into protests over the high cost of living in France.

NPR's Eleanor Beardsley reports from Paris that more than 350 people were arrested in demonstrations in the city on Saturday, and that "police shot 10,000 teargas volleys, and used 134,000 liters of water against the protesters."

Earlier on Sunday, Macron visited the Arc de Triomphe to survey the damage there.

The protests began on November 17th, when hundreds of thousands of people across France turned out to protest fuel taxes that Macron imposed as part of a plan to reduce energy consumption and tackle climate change. According to The New York Times demonstrators say the French government "talks about the end of the world while we are talking about the end of the month."

At least three people have died in the protests since they began, all in traffic accidents caused by blockades set up by yellow vest protesters.

The BBC reports, "This is the 50 percent of the French population, that we don't really see very much. This is not those thriving in the big cities. This is not the impoverished people in the high immigration areas. This is the other 50 percent who live out in small towns, around the country. People who feel that they are completely forgotten economically, culturally, politically."

The protesters have no apparent leaders, making it difficult for the French government to negotiate or meet with them.

"It's clear that the government doesn't really know how to respond," Beardsley reports. "This sort of movement has never happened before. Usually you have unions you can deal with or leaders you can deal with." The current protests, Beardsley says, is a fluid and ever-changing movement with no clear leaders.

Extremists on the left and right, anarchists and vandals have joined the demonstrations. In Paris, protesters sprayed the Arc de Triomphe with graffiti, overturned cars and set them on fire, and smashed store shop windows.

Macron said on Saturday, "What happened today in Paris has nothing to do with the peaceful expression of legitimate anger. Nothing justifies attacking the security forces, vandalizing businesses, either private or public ones, or that passers-by or journalists are threatened, or the Arc de Triomphe defaced."

The French government says it is considering all options to control the protests and stem the violence.