Accessibility links
In Love With Teen Lit: Remembering The 'Paperback Crush' Of The '80s And '90s As a preteen Gabrielle Moss devoured books in "The Baby-Sitters Club" and "Sweet Valley High" series. She recently reread them for "nostalgic stress relief" and ended up writing a book on the genre. 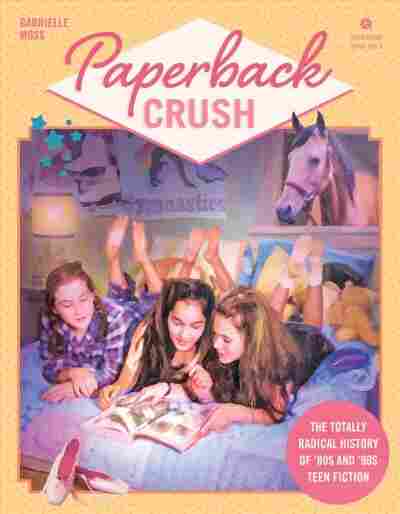 The Totally Radical History of '80s and '90s Teen Fiction

A couple years ago, author Gabrielle Moss was feeling "worn down by the world" and found herself impulse buying an entire crate of "Sweet Valley High" books on eBay for $25.

At first, Moss was binging these books — "Sweet Valley" and other series — as "nostalgic stress relief." Moss had devoured these pastel-colored paperbacks during her own preteen years — she estimates she read two per week.

"I started wondering ... what was the impact of reading all these books?" she says. She attempts to answer that question in Paperback Crush, a deep dive into teen lit of the '80s and '90s.

These books were focused on "heterosexual, white, middle-class, girl experiences," she says. The protagonist usually faces a "small problem that seems very big to her" that gets wrapped up in about 100 pages. She says many of the books may have been written off as unserious, but they reveal something meaningful about the time in which they were written.

On the cyclical nature of trends in teen fiction

In the '40s and '50s and early '60s you had very wholesome books for girls called "malt shop novels" ... Jenny had a crush on Tommy, they kissed with closed mouths, the end. In the late '60s, you had the rise of something called "the problem novel" — the most famous example of that would be probably S.E. Hinton's The Outsiders. And these books were grittier, more realistic — you had sex and drugs and family trouble. And then, in the late '70s, the cycle just turned over again. A series called "Wildfire" was first released in 1979, and these were very, very chaste, very wholesome romance novels and they were such enormous hits that it was like the "malt shop" books were back.

Books like 'Baby-Sitters Club' — those girls were too young to be obsessed with boyfriends and so instead they had these girls define themselves by their friendship relationships with other girls.

When they started, in the mid-'80s, publishing more books for younger girls — books like "Baby-Sitters Club" — those girls were too young to be obsessed with boyfriends and so instead they had these girls define themselves by their friendship relationships with other girls. And I think that was one of the biggest impacts these books had on our generation ... kind of planting the seed of the idea that your friendships with other women were as important in your life as a romantic relationship might be down the line.

On how '80s and '90s books barely talked about sex

YA books in the '70s were becoming franker about sex with authors like Judy Blume. And then, the return of the "malt shop" vibe plus the beginning of the AIDS crisis kind of added up to sex becoming completely absent from these books except in cases where someone would have sex once, come down with a fatal STD, and it would be a learning experience for everyone. ...

A lot of these books were set up as a conscious corrective to the more freewheeling sexual attitudes of '70s YA. You know, now that sex was suddenly revealed to be so dangerous and have so many consequences that the previous generation hadn't been aware of, I think there was a conscious decision on the part of YA authors to say ... "We're not going to depict this as something you can do lightly, or something that you should be doing at all."

On teen books in the '80s and '90s that dealt with difficult subjects, such as suicide or eating disorders

There was so much news — high-profile kidnappings of children, you know, injuries on playgrounds. People were suddenly very aware of how vulnerable children were, how much there was in the world that could hurt them. And I think that these books were a reaction to that understanding. So the message of all of them was ... Be careful. Don't talk to strangers. If you feel anything bad, you know, if you feel like you want to skip lunch today to be thinner, if you're feeling sad, tell your parents right away. Don't try to deal with it on your own.

On these books lacking diversity

These books were incredibly white. ... Even series of like the "Baby-Sitters Club" that had some characters of color were usually written by white authors. And I spoke to a few authors of color who had been working during this period ... and they told me they ran into, you know, tremendous institutional racism at publishers — people who told them ... "We only publish historical novels about African-American teens" or "We already published a book this year with an Asian-American protagonist ... we don't have room on our schedule for another one."

Even in a very fluffy book like "Sweet Valley High" there's an emphasis on making yourself happy. ... In books like "Baby-Sitters Club" or "Sleepover Friends" there's an emphasis on thriving and doing things that bring you joy, helping others, creating a community, seeing your ideas through. Those weren't really ideas I was getting at home, just because my parents were from a different generation. But I really got it from those books — I feel like they raised me in a way. ...

Melissa Gray and Jolie Myers produced and edited this interview for broadcast. Beth Novey adapted it for the Web.

Read an excerpt of Paperback Crush