Accessibility links
'It Has Been A Dream': Ethiopians Are Adjusting To Rapid Democratic Changes Ethiopia is going through a historic transformation. The country has welcomed a new reformist leader, forged peace with Eritrea and opened up a democratic space after decades of authoritarian rule. 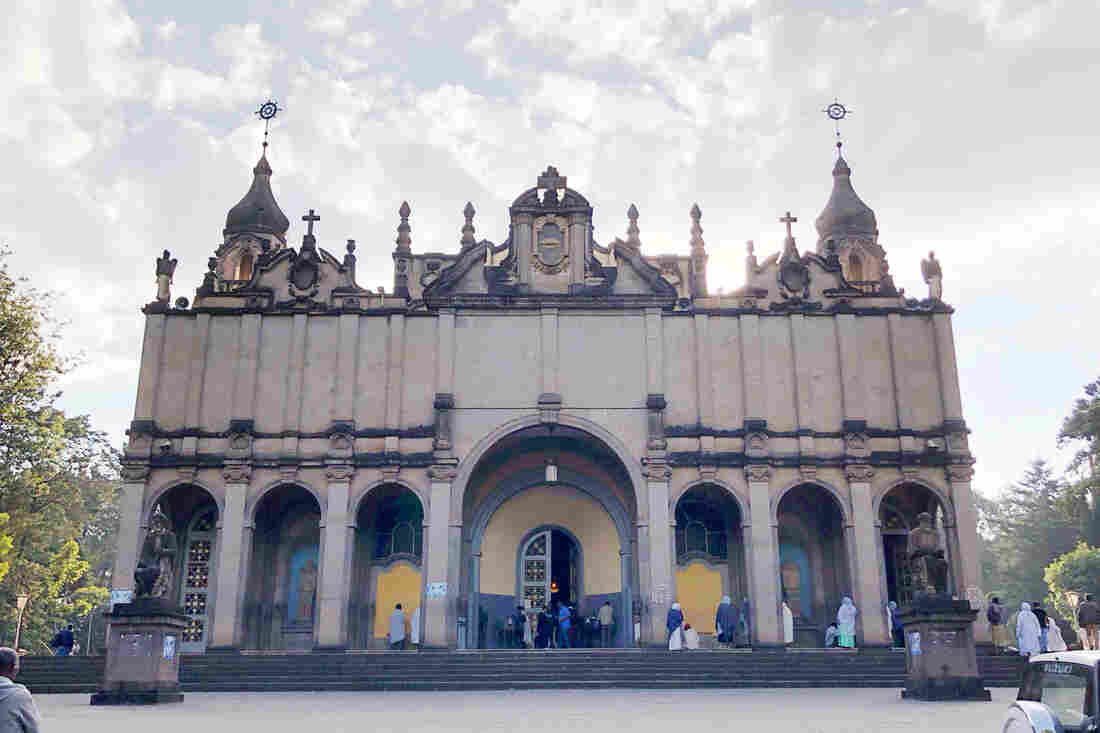 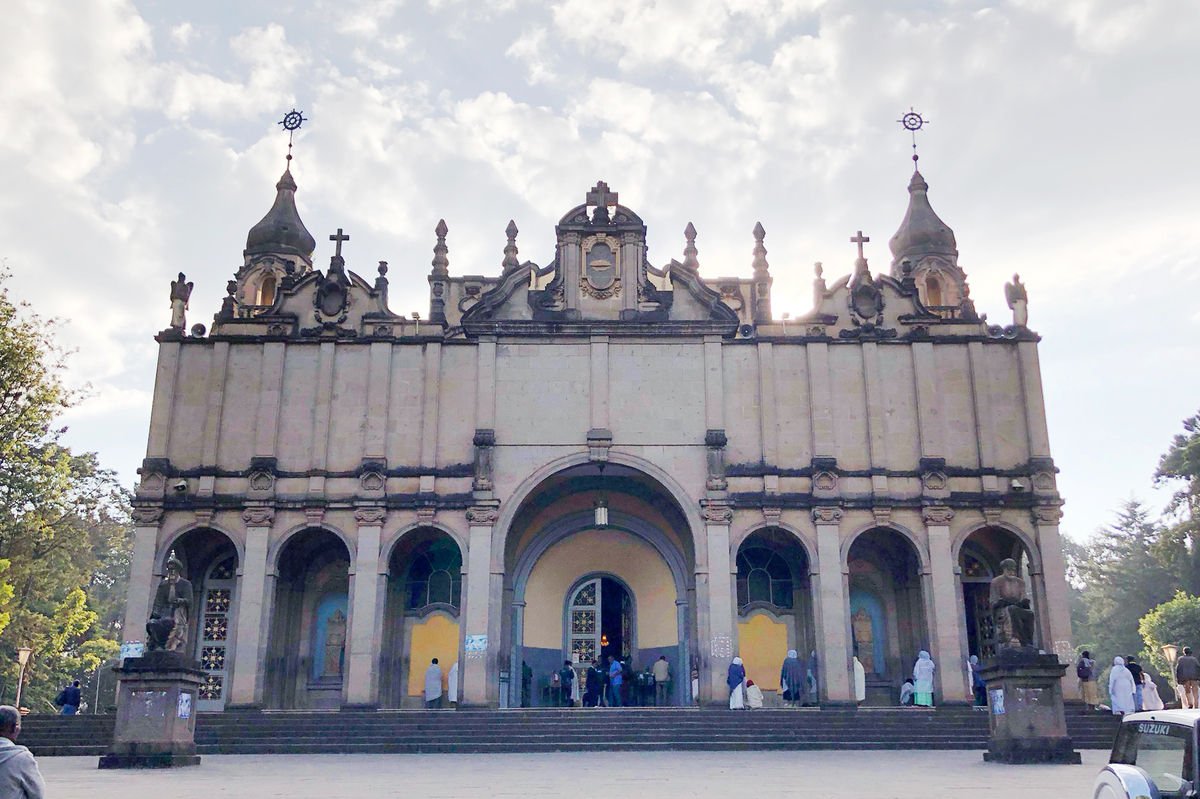 The Holy Trinity Cathedral in Ethiopia's capital, where many national heroes are buried.

As the sun comes up, the white stone on the Holy Trinity Cathedral turns golden.

The church, in Ethiopia's capital, is intimately tied to the country's history. Many national heroes are buried in its gardens. The throne of last emperor, Haile Selassie, is still right next to the altar, and his and the empress's remains are said to be buried here.

Ethiopians come before dawn to pray. Adanech Woldermariam, who is in her 70s, stands outside and sets her forehead against one of the cathedral's stone walls. She looks up, her face framed by a white, cotton headscarf, and she begins to weep.

She is reminded of a brutal border conflict between Ethiopia and Eritrea in the late 1990s that killed tens of thousands and eventually led to a two-decade cold war.

"When the war against Eritrea began," she says, "I saw friends deported, their homes, their belongings, taken away forcefully. It was so unfair, because they had worked so hard."

For decades, she says, she has wanted to speak that truth in public. And now, she finally can.

Over the past year, Ethiopia has gone through a historic transformation at breakneck speed. The country welcomed a new reformist prime minister, Abiy Ahmed, in April. He forged peace with former enemy Eritrea, ended an almost four-month-long state of emergency and freed the country's thousands of political prisoners. Seemingly overnight, the new leader opened up a democratic space — allowing foes, allies and regular Ethiopians a chance to speak their minds — after decades of authoritarian rule.

'Peace Is Everything': Ethiopia And Eritrea Embrace Open Border After Long Conflict

Outside the church, Teshale Abebe is praying among the trees and tombstones. At 65, he is old enough to remember that you couldn't criticize the king. In the 1970s and '80s, he lived through the communist regime, which massacred its political opponents in a period known as the Ethiopian Red Terror. And he saw what happened over the past three years as a government intent on squashing a protest movement threw tens of thousands in jail and killed at least 1,000 young people demonstrating in the streets.

He is happy about this year's reforms and cherishes that he can talk openly about politics now. He says he came to pray that the changes continue. But history, he says, makes him feel that this is all tenuous.

Indeed, even this new administration has already shown flashes of authoritarianism, leading Human Rights Watch to warn against a backslide. 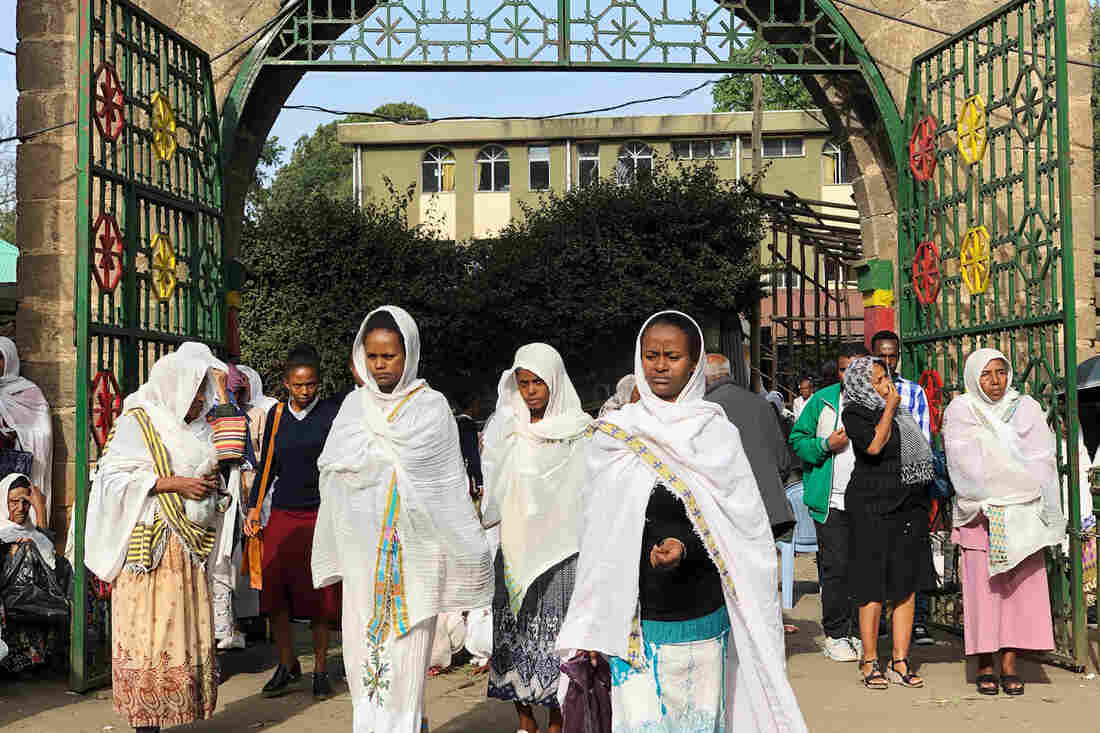 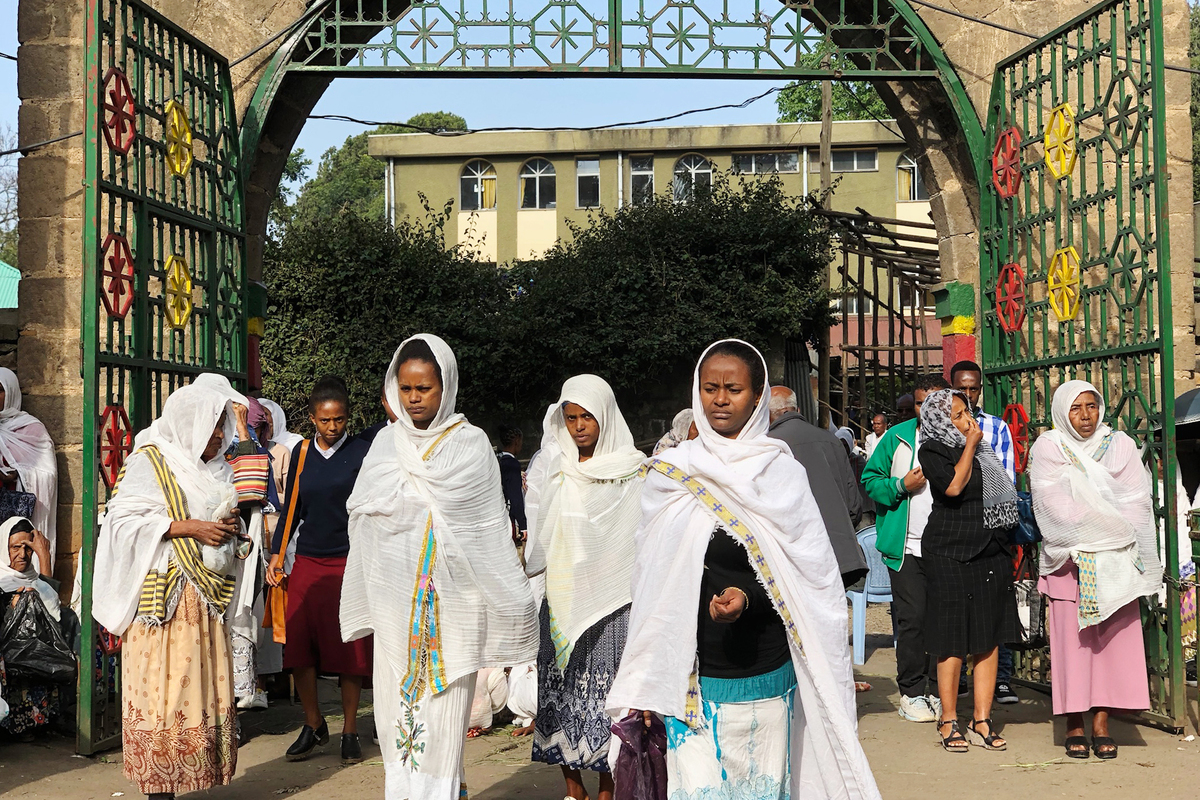 "I cannot say this change will be implemented in this year," he says. "It will take years and will take a lot more blood."

Until recently, Atnaf Berhane, 29, and Befeqadu Hailu, 38, could not go anywhere without an intelligence agent tailing them.

Both of them gained world attention as part of the Zone 9 bloggers. The collective's name references a notorious prison in Ethiopia with eight zones. To them, the rest of the country was like a huge prison itself — Zone 9.

They wrote against corruption and in favor of democracy. But in 2014, the government arrested the six of them and accused them of "terrorism." Some of them were released a year later. Berhane and Hailu were released in October 2015.

"It has been a dream for us what we are experiencing," says Berhane.

Now, they aren't checking who might be listening and they're not afraid that an intelligence agent might show up at any moment. Even out of jail, the state still haunted them. Hailu, for example, was rearrested in 2016 after he gave an interview to Voice of America. The charges against the two were finally dropped in February. To Hailu, this new Ethiopia is both exhilarating and disorienting.

"One of the things we were struggling for was freedom from fear, so now we don't know what to do with it," Hailu says.

Just a few months ago, Berhane says, they were crystal clear on what they were against: the ruthless, corrupt government. But they weren't expecting the Ethiopian People's Revolutionary Democratic Front, the ruling coalition, to offer up a reformist prime minster. 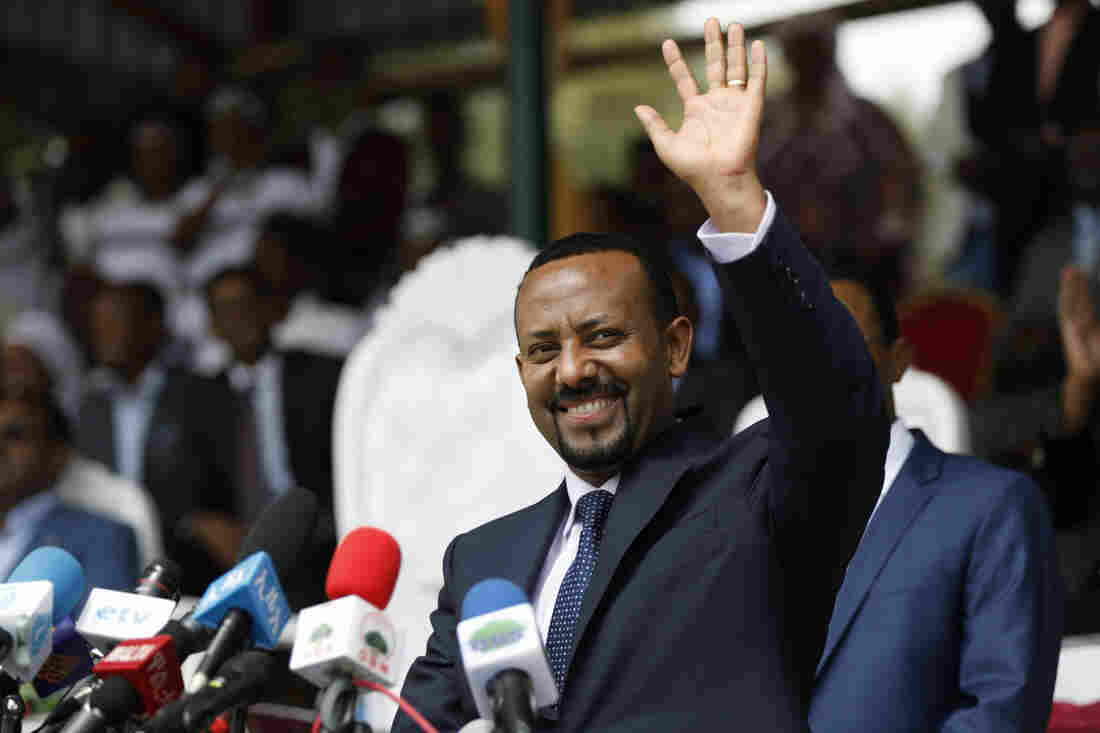 Ethiopia's new prime minister, Abiy Ahmed, at a rally in April, soon after he was selected to lead by the Ethiopian People's Revolutionary Democratic Front, the ruling party. Zacharias Abubeker/AFP/Getty Images hide caption 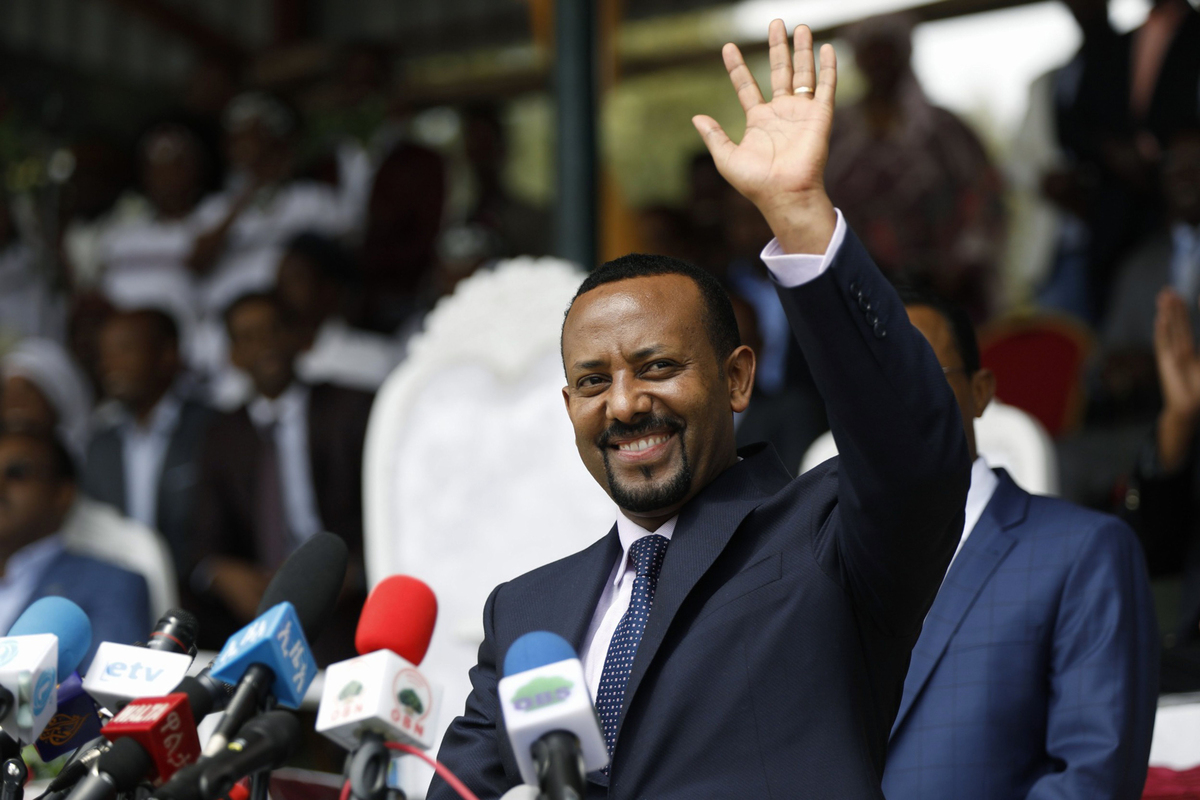 Ethiopia's new prime minister, Abiy Ahmed, at a rally in April, soon after he was selected to lead by the Ethiopian People's Revolutionary Democratic Front, the ruling party.

Now, the government has welcomed back opposition figures who come with all kinds of ideas. Some have stoked ethnic divisions; others hint at secession. It's a brew that has caused consternation and, in some cases, erupted in violence.

"All the [extremists] have come together and when you see it, you feel that you are not safe," Hailu says.

The situation has left them — rebellious, harsh critics of the former regime — now cautiously backing a prime minister from the same party that threw them in jail.

To political analyst Hallelujah Lulie, this process was a long time coming.

Five decades ago, a Marxist student movement posed a challenge to Ethiopia's absolute monarchy and feudal system, saying the country should be democratic and treat all its people equally. In 1974, the movement ended Selassie's reign in a bloody coup. The Soviet-backed Derg regime ruled until it was itself overthrown in 1991 by the Ethiopian People's Revolutionary Democratic Front, which formed a federal system that — on paper — afforded ethnic groups in the country equality, giving them the right to education and justice in their own languages.

"The federalism has empowered groups that were marginalized from the political sphere in the past, so you can no more push these people around," Lulie says. "They have power now."

In a lot of ways, he says, all of these historical forces are pushing Ethiopia toward democracy. Whether the elites or ordinary Ethiopians like it or not, they are going to have to negotiate a way forward.

"The infrastructure for protest is still intact, so it's democratize or perish," Lulie says.

Every Tuesday at sundown, the Ethiopian National Theater in Addis Ababa fills up with people seeking answers. They come to hear Mehret Debebe, a psychiatrist who gives public lectures about changing one's mindset.

After taking the stage, Debebe begins to unpack psychological theory, including Freud's iceberg model. There is a lot that people may be feeling, he says, that they cannot necessarily see.

Like he's conducting a TED Talk, he clicks a button and a video plays on a big screen. It shows a young child who is suddenly startled by his own shadow.

The audience erupts into laughter.

Debebe explains that had the child understood what a shadow was, he could have controlled his emotions. The audience members are rapt, as if they have just realized something about their own lives.

For decades, Ethiopians have lived in fear, the psychiatrist explains in an interview after the lecture. But now, they have the opportunity — the freedom — to explore that metaphorical shadow.

"The way I see it is, this nation is not only awakening but also it's kind of perplexed in a soul-searching process," Debebe says.

It is a moment of rethinking everything — from the war with Eritrea to democracy to the legacies of certain emperors.

"Someone will say, 'This person is the hero of my life,' and the next person will say, 'This is a criminal,' " Debebe says. "And both can be right. And to tolerate and to have that in the same country, for me it's a very beautiful experience."

It's beautiful, he repeats, but also dangerous.