Accessibility links
The Best Music Of 2018 Says, 'We're Here, Get Used To It' Women dominated NPR Music's list of the best albums of 2018. But the revolution behind the changes in music today is deeper, and more subtle, than the numbers reveal. 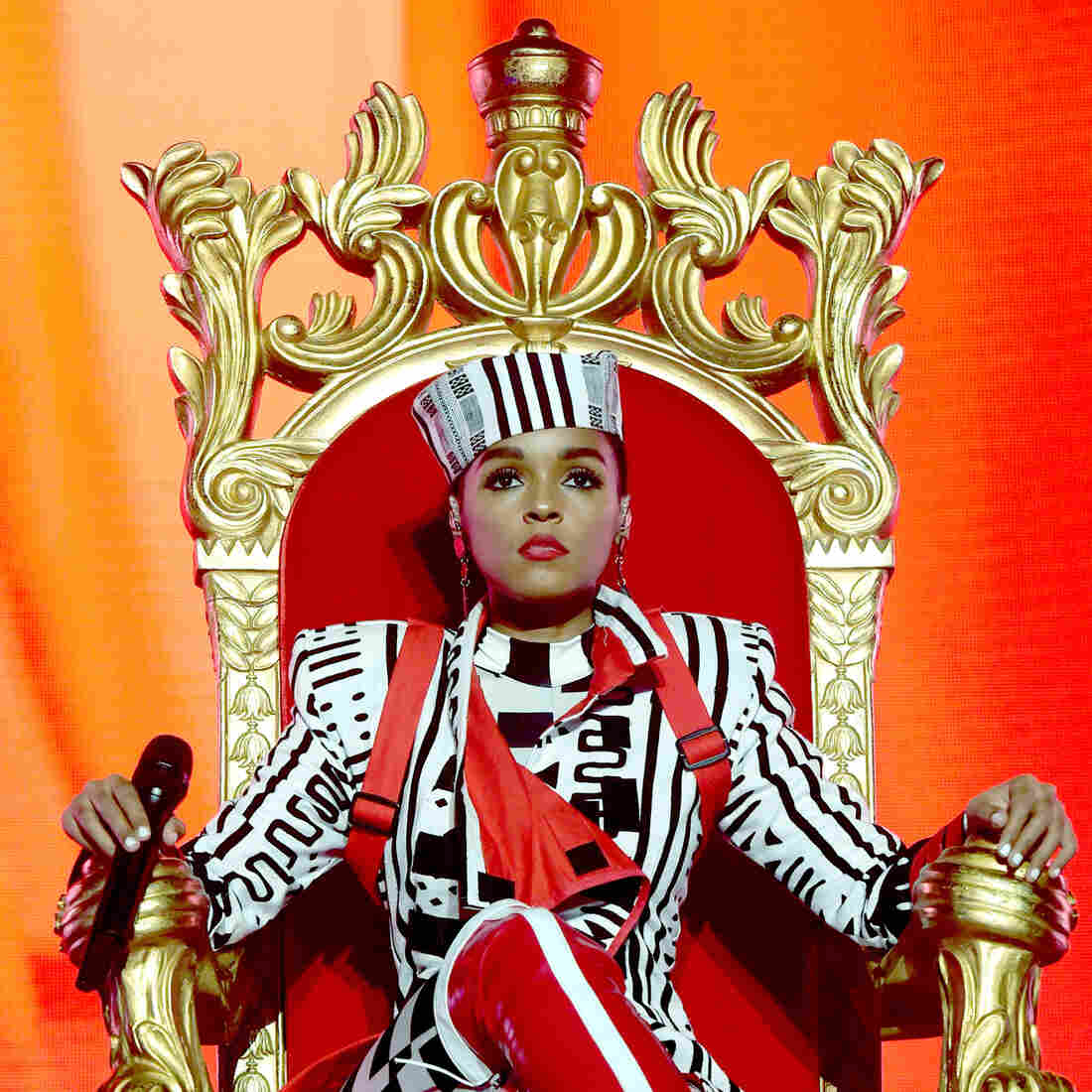 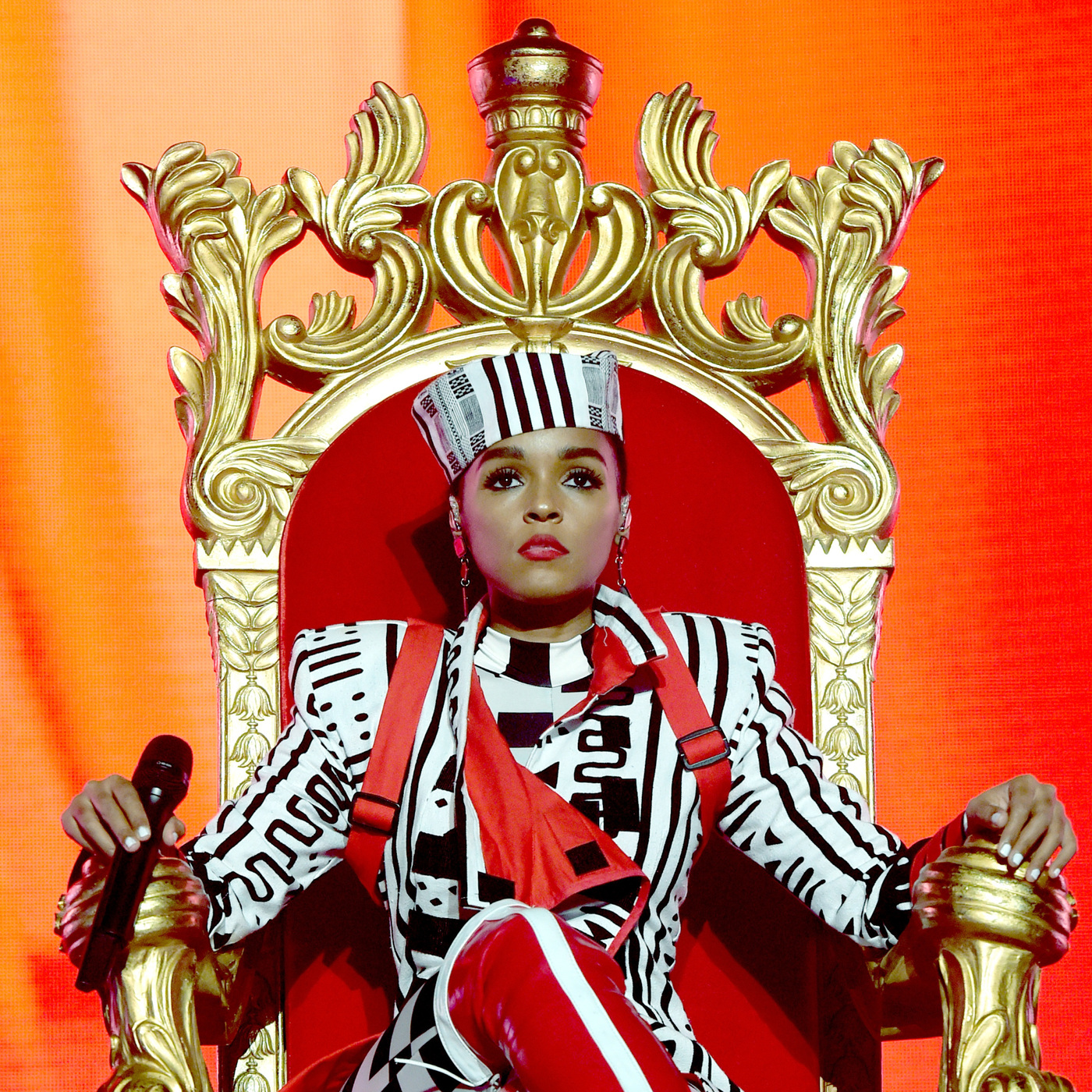 Sometimes one little letter can change a word, or a world. "Paint the city pink!" Janelle Monae raps in "Django Jane," the victory lap at the center of Dirty Computer, her third album, first "emotion picture" and winning bid to own the unstable zeitgeist of 2018. (She also says, "let the vagina have a monologue," but we'll get to that later.) Then she grabs the center of that loaded adjective and gently bends it. In "Pynk," the song that follows "Django Jane," Monae makes clear what pink means to her: It's not a confining gender marker, but the hue of a life-changing eroticism that can originate in any body that perceives itself as nonlinear, receptive, multi-layered, radically soft. Pink in the birth canal, under the dreaming eyelid, at the tongue tip, touching the heart. "Deep inside, we're all just pynk," she sings.

Paint the city pynk: Dirty Computer, like so many of the best albums of 2018, takes on the work of confronting prejudice and other cultural presumptions while still radiating self-assurance and the hard-earned privilege to speak. This music doesn't herald revolution so much as demand acknowledgment that the long turn toward a new paradigm has already begun. They're the pop equivalent of political firebrands like Alexandria Ocasio-Cortez or the Parkland teens: mostly young but more seasoned in the fire of struggle than older generations may be able to grasp, visionary musicians who are redefining the relationship between the margins and the center simply by standing their ground.

The frameworks might feel familiar on the surface; on Dirty Computer they sound like hip-hop swagger, electro-funk and tributes to Prince. But as Afro-futurists and feminists have long demonstrated, the alternate world where marginalized or silenced people can flourish doesn't exist on the other shore. It's here; you just have to adjust your senses to experience it. You have to dream in colors that no one has named in quite the same way before. Maybe it just takes one small move – changing one letter in a too-familiar word, for example – to show that those other tones were there all along.

The artists whose albums meant the most to us are masters of such subtle but powerful adjustments. Through the stories they told and the sounds they cultivated, they helped listeners find ways to thrive in a world that many are finding difficult to tolerate. These were not, for the most part, obvious gestures of protest — although Monae's confident world-building, Mitski's insistent transformations of private thoughts into a common tongue, or Kacey Musgraves's diligent cultivation of a musical framework big enough to allow her to roam all do say "no" to certain presumptions about authenticity while saying "yes" to imaginative expansiveness. The cities these albums paint pynk may only be as big as the inside of their builders' minds, or of the span of their beloved listeners' arms encircling each other. But their impact shows that those realms, when recognized, are limitless.

It's tempting to view 2018 as a revolutionary time in music, simply because of surface demographics. On NPR Music's albums list, every entry in the Top 20 is spearheaded by a woman or a man of color. Only when Kamasi Washington strolls in at No. 18 does a man's name appear in a leading role. Albums centered around the fresh voices of rock troubadour Lucy Dacus, rapper Noname and R&B futurist Tierra Whack recast those subgenres without any overt sense of struggle; these women's voices belonged, instantly, in the lineage. Others, like the astounding Spanish singer Rosalía and the daring rockers Frances Quinlan (of Hop Along) and Courtney Barnett, took next steps in securing their spots at the center of any talk about who matters, musically, now. Then there were the young veterans who constructed their own, alternate, living Hall of Fame with work that proved definitive: Brandi Carlile at the four corners of Americana, country, folk and rock; Robyn in dance music; The Pistol Annies trio of Miranda Lambert, Ashley Monroe and Angaleena Presley in country and Magos Herrera connecting new music and jazz. Together, these artists' works allow us to recognize a musical world in which women are not intervening or acting as exceptions. They are defining, making the rules.

This seems like a more sudden change than it is. A glance back at the previous two years of our poll shows only one act fronted by a straight white male in the Top 10 in each year (as long as you don't consider rock's mourned god David Bowie, whose final album was No. 3 in 2016, conventionally heterosexual). Is this number game really useful, though? So many factors, including our team's own bias toward what we perceive as under-acknowledged points of view, make our lists what they are. And in music scenes outside the mainstream, the rock-dude template has been fraying for years, even as those who don't fit it still face roadblocks large and small. The recognizable sound of music's future is shifting from that of four guitar boys making noise to one woman or queer man perfecting a monologue. Listeners and musicians alike are adjusting to some version of gender equity, although much work remains to solidify it. It's still worth asking, for example, how many women produced, engineered or played central roles as instrumentalists on the albums that grace our list. Stars matter; so does the firmament that supports and connects them.

That said, we are in an exceptionally rich moment for musical storytelling. In some ways it parallels what's happening in literature. Just look at any of the Best lists for this year's fiction, for example, and you'll find novels confronting racism in the New South and violence in post-colonialist India and the Philippines; memoirs recounting childhoods marked by racism and sexism in Mississippi or rural Idaho, and meditations on women's power and shared fates with titles like The Female Persuasion and Girls Burn Brighter – not to mention the boom in books about women's rage at (among other things) historical exclusion. The women and men writing these books have benefited from incremental changes in the gatekeeping systems at universities and in publishing, and mostly from their own determination and resilience; they've made extraordinary work and people are hungry for it. Partly, it must be said, people in power are hungry in this way because the virtual experience of reading, or listening, can be a balm for feelings of guilt at our own entitlement. The same is true in music. There's a thrill at hearing the mostly young women who dominate our list declare their right to speak and then do fascinating things with that right. "Went from making tuna sandwiches to making the news," spits Cardi B, post-millennial empowerment's emblematic star, "I started speaking my mind and tripled my views." Her Invasion Of Privacy – this year's most sensational pop breakthrough alongside that of the newly self-assured Ariana Grande – refashions battle rhyming as big-tent feminist empowerment, a women's movement that pops.

What to make of the commercial mainstream, though, in light of all this? In pop, rap and country, men still dominate the charts. The brief reign of superdivas in the early 2000s now feels like a Marvel movie that didn't get a proper sequel. (Beyoncé is making critics' lists but not commercial ones with her and Jay-Z's marriage manifesto, Everything Is Love.) Musgraves, in fact, basically gave up on country radio with Golden Hour, an album that has little twang and none of the arena-rock riffs that her genre loves these days; typically for these revisionist times, the Country Music Association turned around and gave her an Album of the Year award for her gentle treason. If you can't join 'em, beat it, such decisions suggest: Maybe the mainstream will move the boundary.

This wintry season is also a good time, however, to remember what a mainstream really is: a majority defined by rigged outcomes within frameworks defined by those already on top. That is, a semi-fiction shoring up conventional power structures. The streamed new world of 21st century music is just as corporate and consolidated as was the record-label system it has permanently altered, if not displaced. This is why the broken-record line that diversity won't truly triumph until it's evident at all levels of popular music – from the roadies on the bus to the people in the boardrooms – still applies.

Evidence of change can be found, especially in the writing rooms where pop hits are made. Credits by women are legion on the Top 40 right now. Tayla Parx cowrote three of the year's best-selling singles, not to mention "Pynk"; Nicolle Gallyon cowrote two of country's biggest hits, including Dan + Shay's unstoppable ballad, "Tequila." Also heartening is the undeniable rise of LGBTQ+ pop, exemplified by influential releases from Troye Sivan, King Princess, Hayley Kiyoko and Years & Years, among others.

But we can't just dismiss the casually misogynist music that seems to be many listeners' streaming choice right now. The continuum with a shearling coat-clad Drake at one end and the chaotic, often-tragic young rappers who use SoundCloud at the other presents a fascinating but ultimately regressive vision of masculinity that deserves its own year-end essay. There is complexity in the way that even problematic artists like XXXTentacion and Tekashi 6ix9ine portray themselves as both wounded and deadly dangerous. And their outcries are related to the unexamined entitlement expressed by artists like Post Malone. On the surface it seems that in music, as in other aspects of our culture, we are all retreating into niches; in fact, we're all moving in relationship to each other, responding warily and sometimes boldly, working through changes that feel cataclysmic but keep happening anyway.

The relationship between art and commerce in popular music is dynamic and unpredictable. Sometimes a generation asserts itself politically and changes the substance of what sells. More often, as now, voices glimmer through, not obviously in sync, but connected at a deeper level. One thing seems true: In 2018, women in music are not newcomers, novelties or antidotes. They are here, at the top, but more importantly, in the middle.