Accessibility links
For President Bush, Escaping To Maine Was A 'Point Of View' No matter where in the globe former President Bush's pursuits took him, he circled back every year, as if tethered, to Walker's Point — his family's estate in Kennebunkport, Maine. 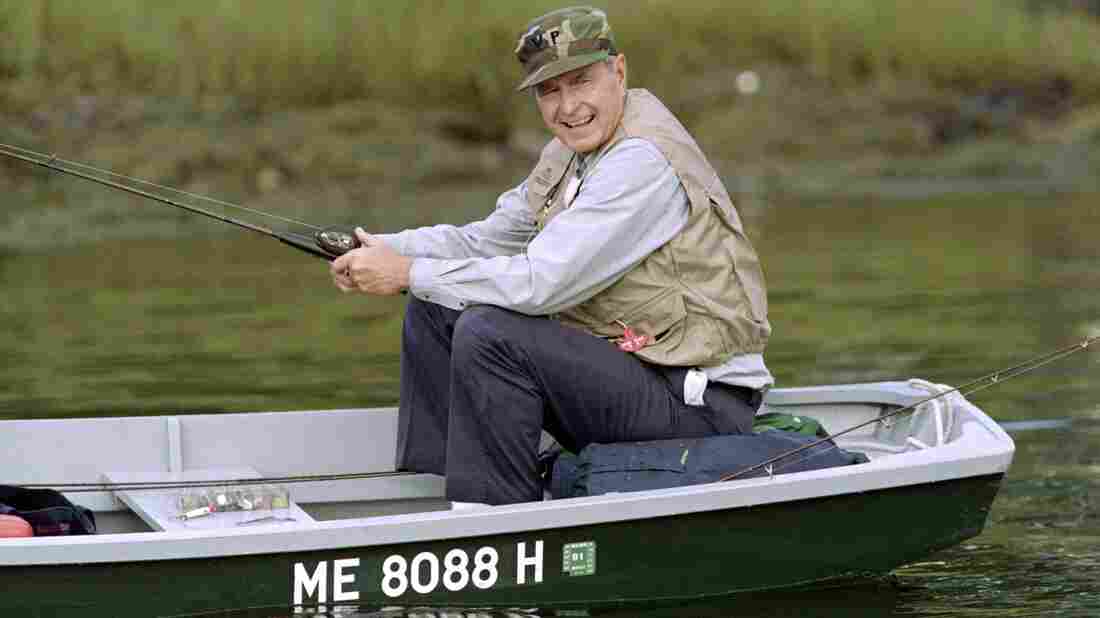 Then-President George H.W. Bush fishing on the Kennebunk River in August 1990, before a scheduled meeting with the Canadian prime minister at his Kennebunkport, Maine home. Jerome Delay/AFP/Getty Images hide caption 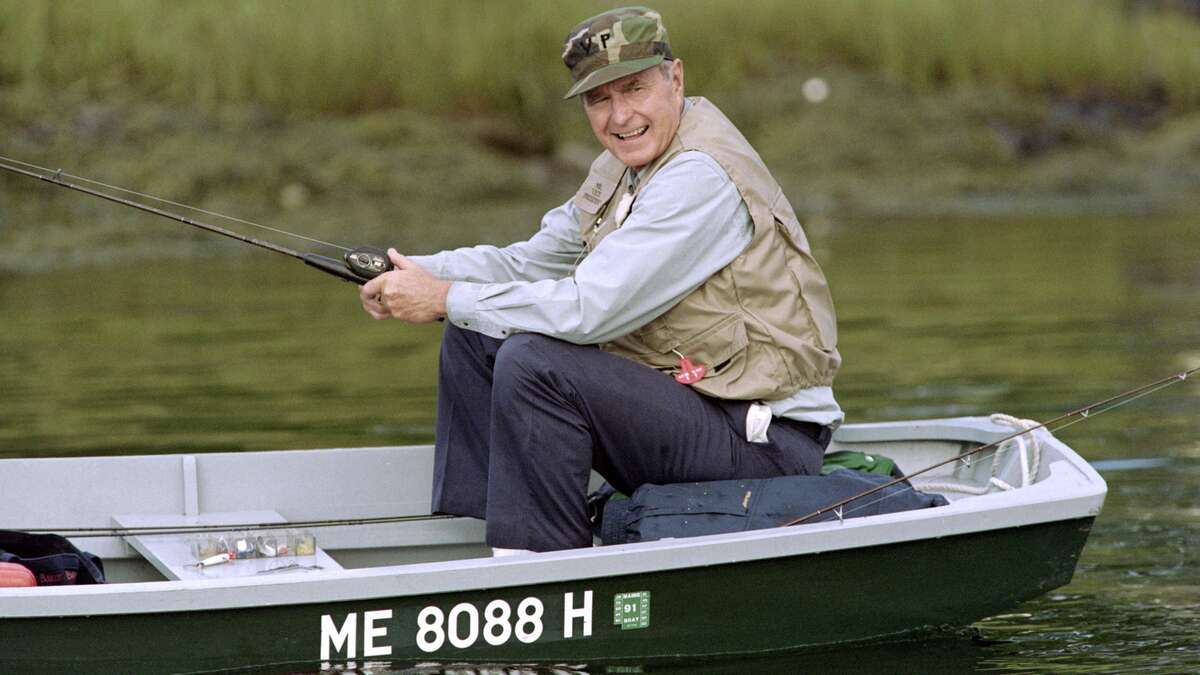 Then-President George H.W. Bush fishing on the Kennebunk River in August 1990, before a scheduled meeting with the Canadian prime minister at his Kennebunkport, Maine home.

For many in the community surrounding Walker's Point in Kennebunkport, Maine, the former President George H.W. Bush was much more than the leader of the free world — he was their beloved friend and neighbor.

No matter where in the globe former President Bush's pursuits took him, he circled back every year, as if tethered, to Walker's Point — the estate his ancestors established more than a century ago on a windy promontory off Kennebunkport.

"It's where my family comes home, and it's our anchor to windward," Bush told reporters on a Kennebunkport golf course in 1991. "It has great meaning in terms of family and we are blessed. The Bush family is blessed."

He visited the point every summer of his life, with one exception: 1944, when he was a Navy pilot. He mentioned its importance most every time he spoke publicly during his annual sojourns to what became known as the Summer White House.

"This is a place where we really enjoy ourselves, but more than that, kind of refurbish our souls, get our batteries all charged up and enjoy life really to the fullest. It's a point of view. You can feel it, in the land and in the water here," he said in 1989, a year after he was elected president.

Although matters of state would impinge on his leisure during his presidency, Bush had two constant goals when in Maine — golf and fishing.

"He was always the captain, no matter we were on his boat, my boat or we were just sitting there having lunch. He was still captain," said Bill Busch, no relation, the president's longtime fishing companion.

Busch and the president plied the coast from Scarborough to Ogunquit in search of striped bass, with peanut butter and jelly sandwiches in the hold. Usually they would throw the stripers back, when they caught any.

Back in 1989, the Portland Press Herald's front page kept a running tally of the number of days Bush suffered a fishing drought.

"I'm not going to comment on the fishing," Bush said at the time. "A vicious, vicious assault on my ability."

How The Republican Party Changed During George H.W. Bush's Presidency

While national media tagged Bush for an off-putting patrician manner, Busch said the president's collegial nature transcended any sense of class or rank.

"He was the leader of the CIA, and he was a fighter pilot that got shot down. You kind of forget all these things because he disarms you with his good will and just his demeanor and his caring about other people. He makes you feel so comfortable. I just didn't expect to ever see something like that," he said.

Putting Kennebunkport on the map

That assessment is seconded by many of his friends and acquaintances from Maine. But he was more than just a congenial local who happened to be famous — he and his wife Barbara, who died in April, were also kind of brand ambassadors for the town.

"We all talk about branding and we're all scrambling to do that as communities. They did that decades ago," said Laura Dolce, president of the area chamber of commerce.

Dolce said the Bushes goosed the local economy while putting the town on the world map, thanks in part to the coterie of cabinet members, dignitaries, Secret Service members and journalists that would pass through in summer.

"Of course eating and drinking and doing all of that," she said. "But while doing that they're broadcasting to the world. And they have for decades, and the world decides they really want to see where this place is and that has continued, gosh, through 34 years."

"I literally just helped a couple who were on their way up to Boothbay Harbor but stopped here in the state because they had to see where President Bush lives in the summer, and that is our No. 1 request to this day."

The Bushes were known for quiet local philanthropy as well. While Barbara Bush lent her name to Maine Medical Center's children's hospital in Portland, they also endowed an educational fund for the Kennebunkport Conservation Trust. 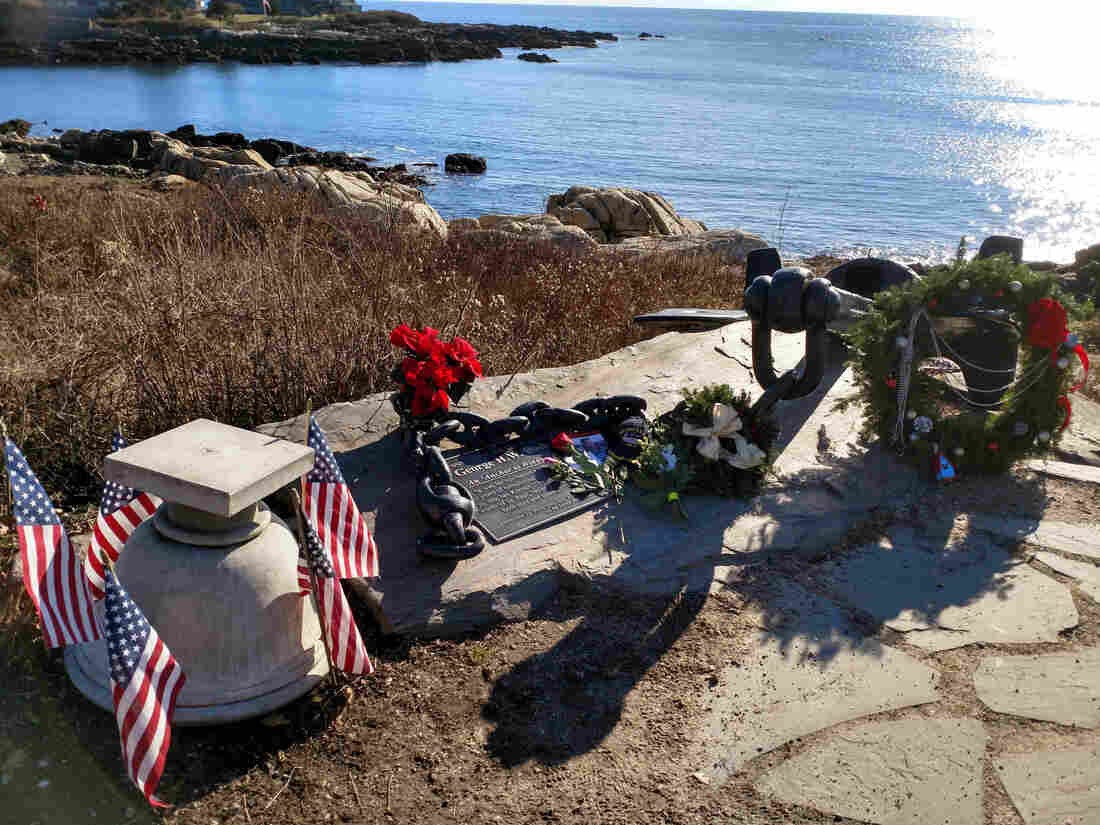 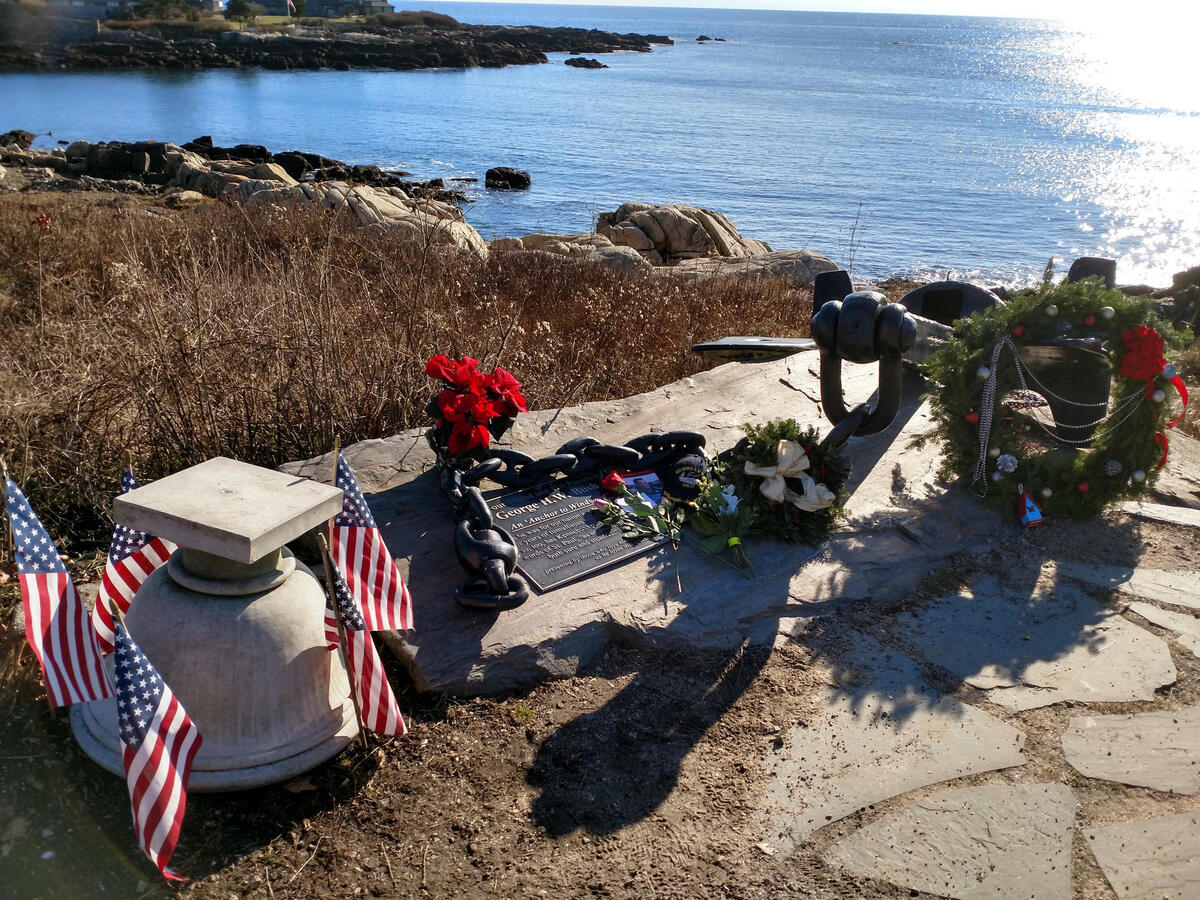 And townspeople gave back, working with the trust to establish a public garden with statuary commemorating Mrs. Bush and, up on a bluff overlooking Walker's Point, a naval anchor honoring the president. They surprised the president with that gift about a decade ago.

"He also spoke from the heart, which meant a lot. And then in true fashion, as Bar expected him to do, he invited everyone back to Walker's Point afterwards, particularly for those people who'd never been to Walker's Point before. And that was his way of saying thank you for this," he said. 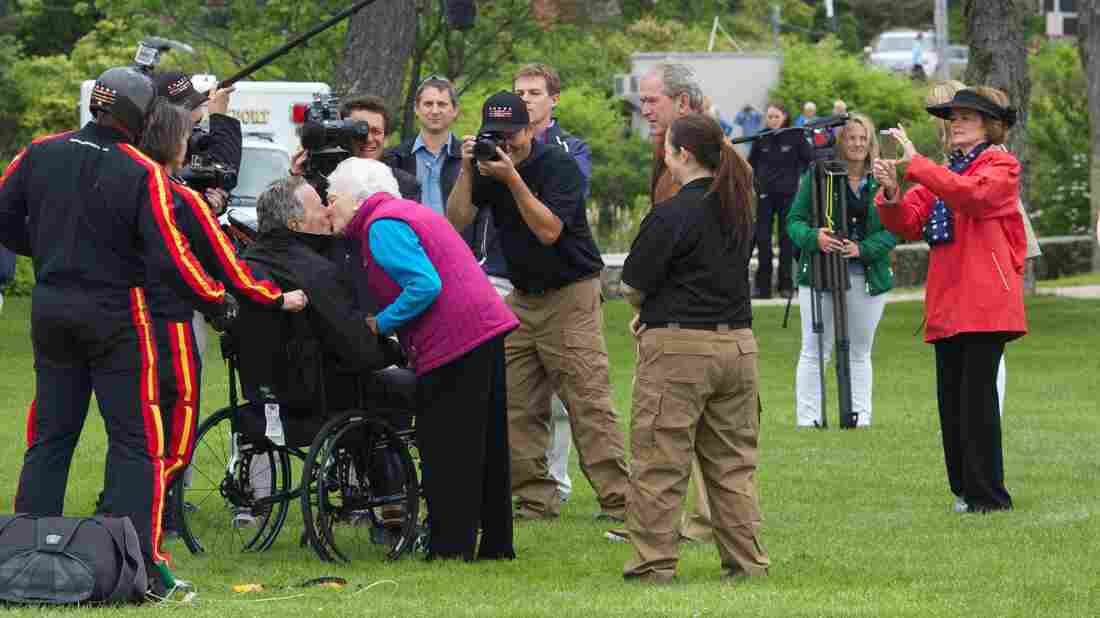 Barbara Bush greets Bush with a kiss after his successful skydive in 2014 in Kennebunkport, Maine to celebrate his 90th birthday. Eric Shea/Getty Images hide caption 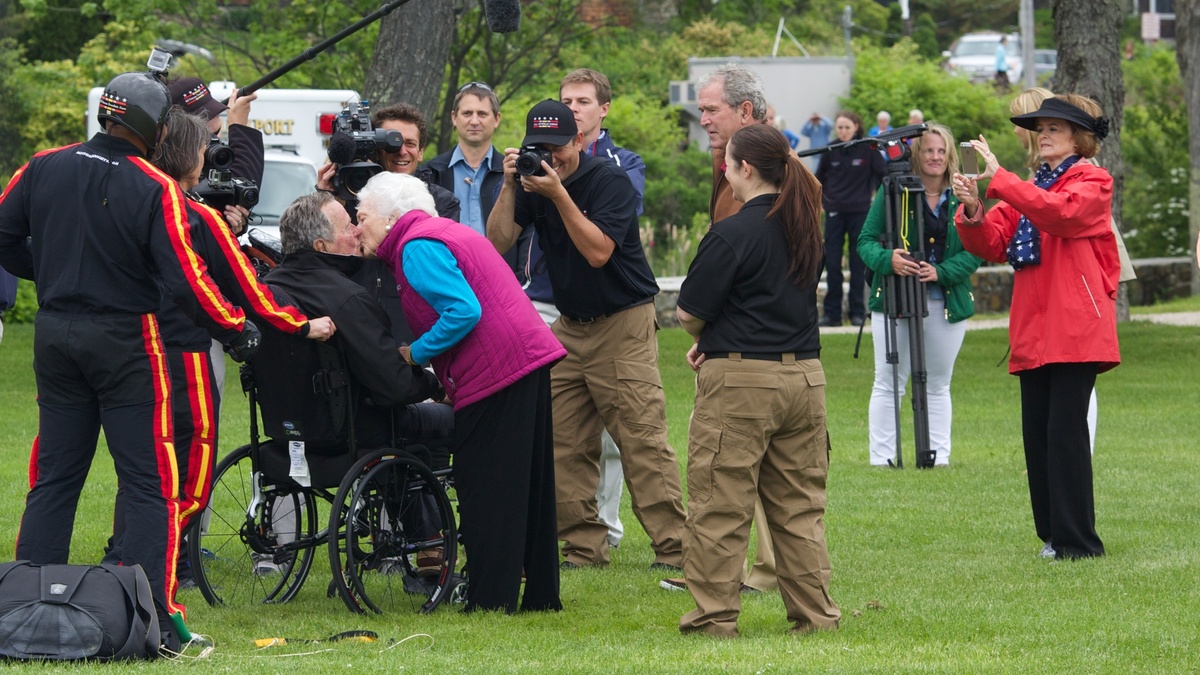 Barbara Bush greets Bush with a kiss after his successful skydive in 2014 in Kennebunkport, Maine to celebrate his 90th birthday.

Bush might have felt slightly less thankful the year the local board of appraisers bumped the assessment on Walker's Point above $2 million. But when a gaggle of reporters quizzed him about it at the Cape Arundel Golf Club, President Bush took a philosophical approach.

"Let them put the taxes wherever they want and I'll pay them in this case. Might have a different attitude if it weren't Kennebunkport and Walker's Point," he said.

Soon after that, he headed back to the links. "Full credit, full credit on the press conference," he said, driving off in the golf cart.

Assistance with the archival audio in this story was provided by the George H. W. Bush Presidential Library and Museum.