Accessibility links
Satanic Sculpture Installed At Illinois Statehouse, Just In Time For The Holidays There's a Nativity scene for Christmas, a menorah for Hanukkah, and something a little different: an arm holding an apple, with a snake coiled around it. 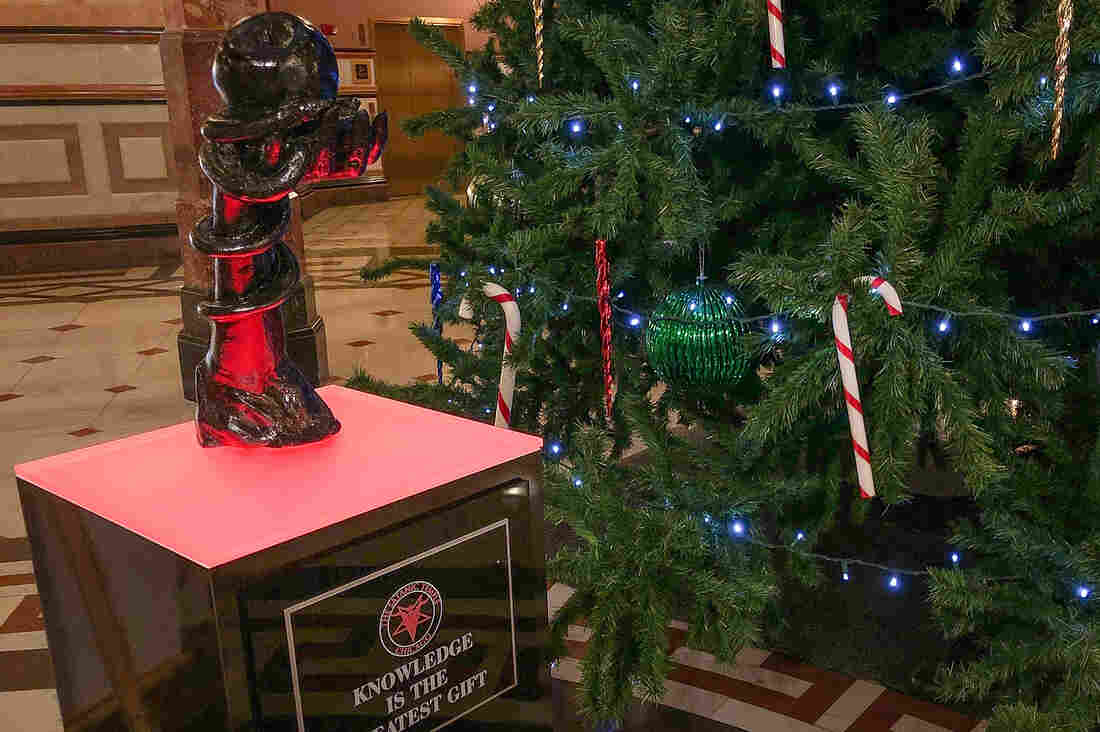 According to the Illinois Secretary of State's office, the temple has the same rights as religious organizations when it comes to displays in the statehouse. Brian Mackey/NPR Illinois 91.9 UIS hide caption 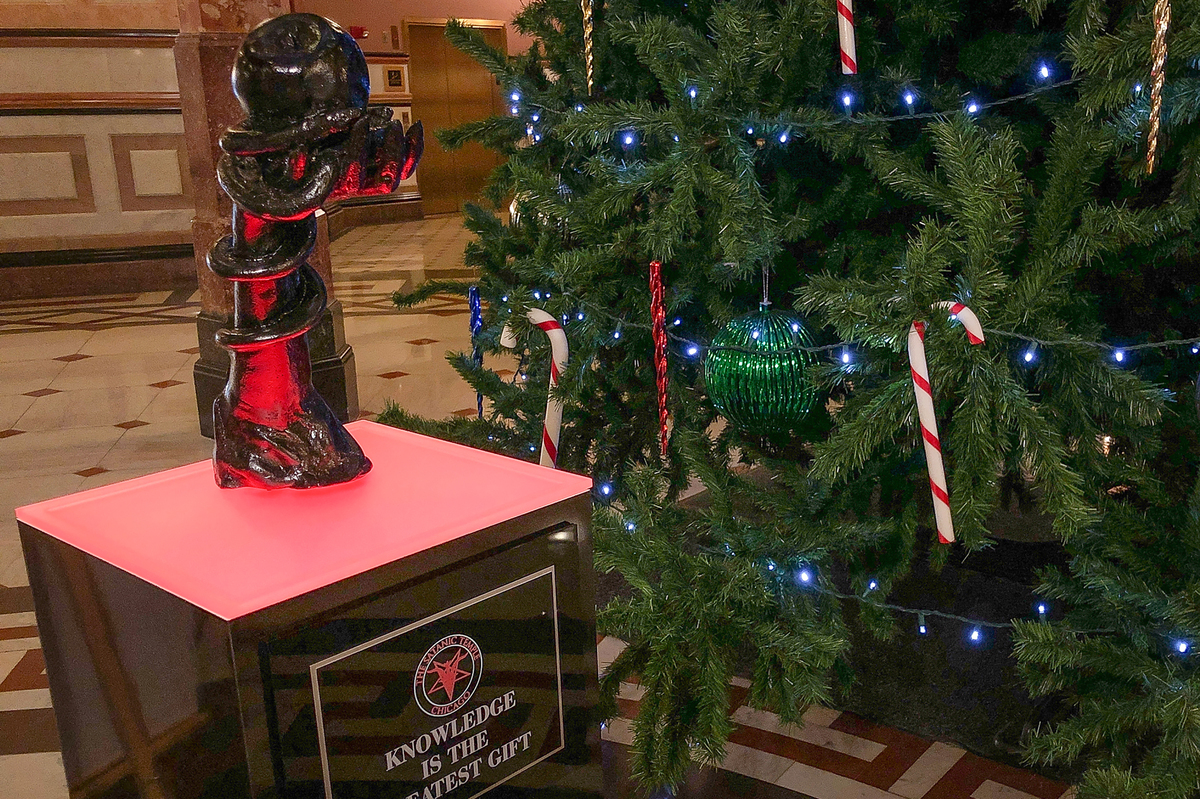 According to the Illinois Secretary of State's office, the temple has the same rights as religious organizations when it comes to displays in the statehouse.

In the Illinois Capitol rotunda this month, several traditions are being celebrated. There's a Nativity scene for Christmas, a menorah for Hanukkah, and then something a little different: an arm holding an apple, with a snake coiled around it.

It's a gift from the Chicago branch of The Satanic Temple. Called "Snaketivity," the work also has a sign that reads "Knowledge Is The Greatest Gift."

Nearby stands a sign in which the state offers a civics lesson — and explains it didn't have much of a choice:

"The State of Illinois is required by the First Amendment of the United States Constitution to allow temporary, public displays in the state capitol so long as these displays are not paid for by taxpayer dollars. Because the first floor of the Capitol Rotunda is a public place, state officials cannot legally censor the content of speech or displays. The United States Supreme Court has held that public officials may legally impose reasonable time, place and manner restrictions regarding displays and speeches, but no regulation can be based on the content of the speech."

Illinois Secretary of State spokesman Dave Druker told The State Journal-Record the temple has the same rights as religious organizations. "This recognizes that."

The Satanic Temple calls itself a "non-theistic organization" in its application to install the display.

In a GoFundMe campaign to raise $1,500 for the display, the group explains its mission: "The Satanic Temple—Chicago will no longer allow one religious perspective to dominate the discourse in the Illinois State Capitol rotunda during the holiday season. ... Please consider what you may do to help us bring Satan to Springfield!"

The group has installed similar displays in other states in recent years. A more snake-prominent version of the display has been a part of the holiday scene on the lawn of the Michigan Capitol. Outside the Arkansas State Capitol in August, the temple presented a statue of a goat-headed creature named Baphomet, flanked by two children looking up at him, to protest a display of the Ten Commandments.

Despite its name, many of the Satanic Temple's activities demonstrate a particular concern for fighting — or at least revealing — the influence of religion in public life. And satanic sculptures have so far been an effective legal strategy for making its case.

On its website, the Satanic Temple explains that its mission "is to encourage benevolence and empathy among all people, reject tyrannical authority, advocate practical common sense and justice, and be directed by the human conscience to undertake noble pursuits guided by the individual will."

The temple has also taken steps to protect its trademarks, especially against depictions that present its symbols as actually nefarious. Last month, the temple settled a lawsuit with Warner Bros. and Netflix, after a reboot of the teen witch show Sabrina used a copy of the goat-headed statue in an episode. The temple argued the statue "not only infringed on its copyright, but damaged its reputation by portraying the statue as evil," The New York Times reported.

The Journal-Register notes other symbols that have been placed in the Illinois Capitol rotunda. Currently on display is a statement from the Freedom From Religion Foundation marking the winter solstice and asserting that "Religion is but myth and superstition that hardens hearts and enslaves minds."

In 2008, a Springfield man got permission to install a Festivus pole at the statehouse, inspired by the holiday celebrated by the Costanzas on Seinfeld. A sign explained that the traditional airing of grievances would start early that year.